Accessibility links
'Good Girls Revolt' Takes On Gender Bias In The Newsroom Amazon's new series Good Girls Revolt, set in 1969, was inspired by a landmark gender bias case at Newsweek. Showrunners hired women at every level of the cast and crew — a Hollywood rarity. 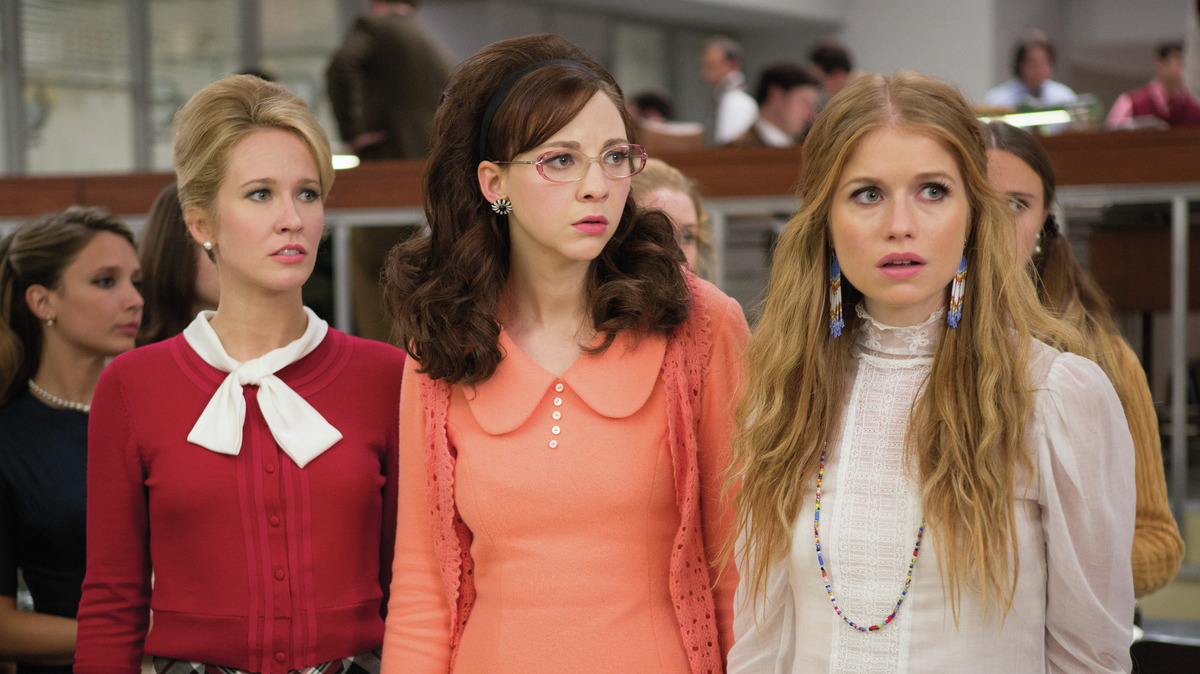 Anna Camp, Erin Darke and Genevieve Angelson star in Good Girls Revolt, which is based on a landmark gender bias case at Newsweek.

Amazon's new 10-part series Good Girls Revolt was inspired by a landmark 1970 case involving a group of women working at Newsweek magazine who sued their employers for gender discrimination. At the show's fictitious News of the Week magazine, women begin to rise up, too.

As the Vietnam War, the counterculture, civil rights and the Black Panthers make headlines, the hierarchy of the newsroom is clear: the men are reporters, the women are researchers. As one female staffer breaks it down to another, "We report, investigate and write files for the reporters. They do a pass on them, put their names on them, and then the stories go to press."

The researchers didn't get bylines, and they were expected to serve coffee to the bosses. Even if they had done the investigative work on a big cover story, they weren't given much more than a pat on, if they were lucky, the head. These women were highly educated, had attended top universities, and, as a reflection of their time, were taught to be well-mannered and mostly apolitical — they'd been raised to be "good girls."

In real life, the late Nora Ephron was one of those who worked (for a short time) at Newsweek. In the fictionalized series, she's played by Grace Gummer, the daughter of Meryl Streep (who has also starred in Ephron's movies). She's depicted as challenging her boss (played by Jim Belushi), who insists "girls do not do rewrites," and suggests she not make waves.

Ephron would go on to become a best-selling essayist, novelist, screenwriter, playwright and movie producer and director.

Feminist, Foodie, Filmmaker — Ephron Did It All, And Wrote About It, Too

Another young woman who made waves in real life at Newsweek was Lynn Povich, who started out as a secretary in the magazine's Paris bureau. The show is based on her book, The Good Girls Revolt. In it, Povich describes the saga of how she and 45 other young women at Newsweek sued their bosses for equal opportunity and pay. She wrote that for decades, the newswomen had been systematically discriminated against in hiring and promotion. They announced their suit the same day Newsweek's cover story on women's lib hit the newsstands.

"The story was picked up everywhere, as you can well imagine," Povich recalls. "I think the Daily News had one of my favorite lines. It said, '46 women, most of them young and most of them pretty, announced they were filing sex discrimination charges today against Newsweek.' "

Povich says they filed a complaint with the Equal Employment Opportunity Commission (EEOC), asking that a third of the reporters and a third of the writers be women, and that a third of the researchers be men. They had to file a second complaint to get Newsweek to comply. A few years later, women at the New York Times, Reader's Digest and other news organizations, including NPR, filed or threatened to file similar class-action lawsuits.

"The fact that we at Newsweek were the first women to organize and decide to change the system from within was an important piece of history, I felt, for people of a younger generation to understand what it was like for women then, and how we managed to change things and inspire other women in the media to do the same," Povich says.

Congress member Eleanor Holmes Norton was a very pregnant attorney with the ACLU in 1970. She helped organize the Newsweek researchers as the women's movement continued to grow. In the series, she's portrayed by actress Joy Bryant. Holmes Norton recalls that she encouraged the women to take off their gloves and fight the system.

"They were going against giants in journalism. Their courage cannot be underestimated," she says. "And you've got to understand who they were: Phi Beta Kappas and other top-of-the-lot women, who were the jewels and who were so pleased to get in on the bottom rung of a big-time news magazine. They were prepared to take anything, and that's what they got — anything, until they rose up, very politely, and insisted upon getting their just due. These were the good girls, indeed I called them the best girls."

Dana Calvo, the show's creator, and an executive producer and writer on it, refers to the Newsweek women as "accidental revolutionaries." As a former journalist with The New York Times, The Associated Press and the Los Angeles Times, Calvo says, she owes them a lot.

"The series is really about awakening, coming into your own voice, and seeing that you have a right to make demands and pursue your dreams," says Calvo. "But along the way, it complicates your love life, your family lives. Those dreams or those narratives that these young women had for themselves are then constantly being edited and revised in their own minds because they start to see themselves differently."

Making the show was itself something of a revolution in Hollywood, an industry where women still struggle for good parts, top jobs and equal pay. Women were hired at every level for Good Girls Revolt. Women are not just in front of the camera in this show; they are in the ranks of executive producers, writers and directors, including an art director and an Oscar-winning production designer.

"Not only is it great to work with a group of really skilled and powerful women, but also that there are men executives in Hollywood who are capable of recognizing female talent and supporting them," says Liza Johnson, who directed the pilot.

On the set of Good Girls Revolt, the actresses said they welcomed having women and feminist men run the show. Anna Camp, who plays the head researcher for News of the Week, says during production she had a glimpse of what many women experienced in 1969. "You know, we are dressed up in these gorgeous period costumes and the makeup and the hair, and at the time it was very, like, to catch a man," Camp says in an interview with her on the set of the show. "My character, specifically, is trying to catch a man and trying to get married. That's her goal right now."

But it begins to dawn on her character and the other women to ask for more. Author Lynn Povich says for working women, there's still a long way to go.

Forty-six years after the Newsweek case, the ACLU has asked the EEOC and the state of California to investigate gender discrimination in Hollywood.