Accessibility links
What Does Early Voting Show? Who's Winning? And Does It Boost Turnout? Early voting makes casting a ballot easier for some people, but it might not boost turnout overall. 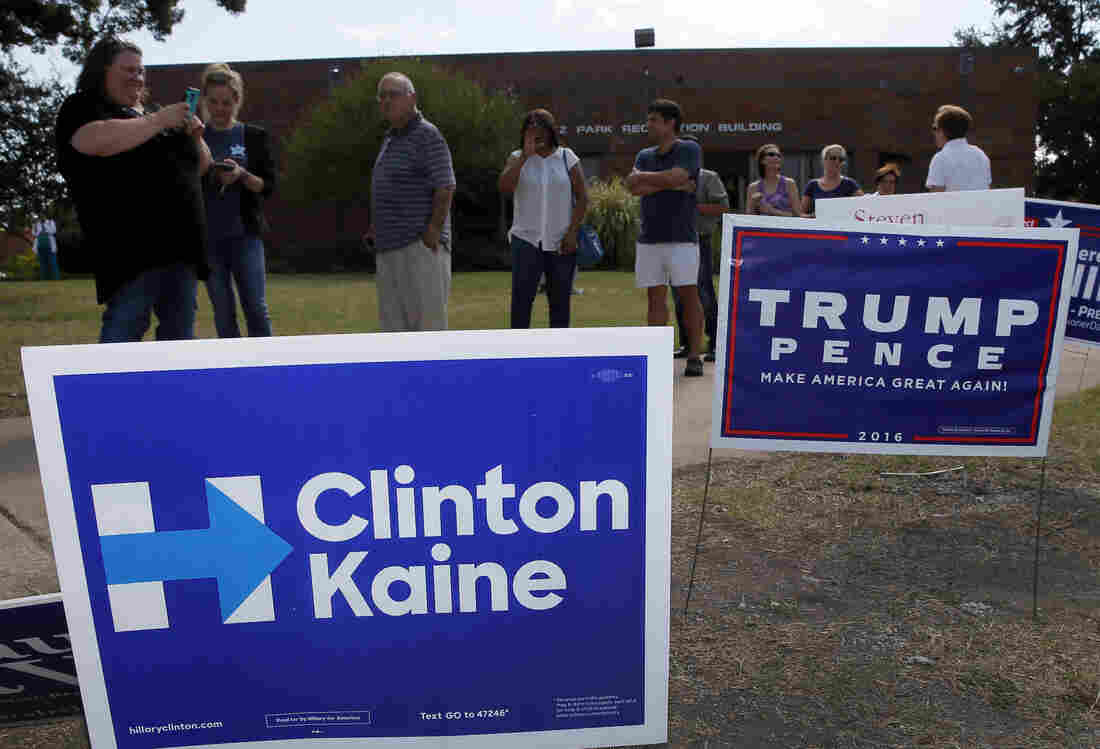 Voters wait in line to cast their ballots at in Dallas on Thursday. Tony Gutierrez/AP hide caption 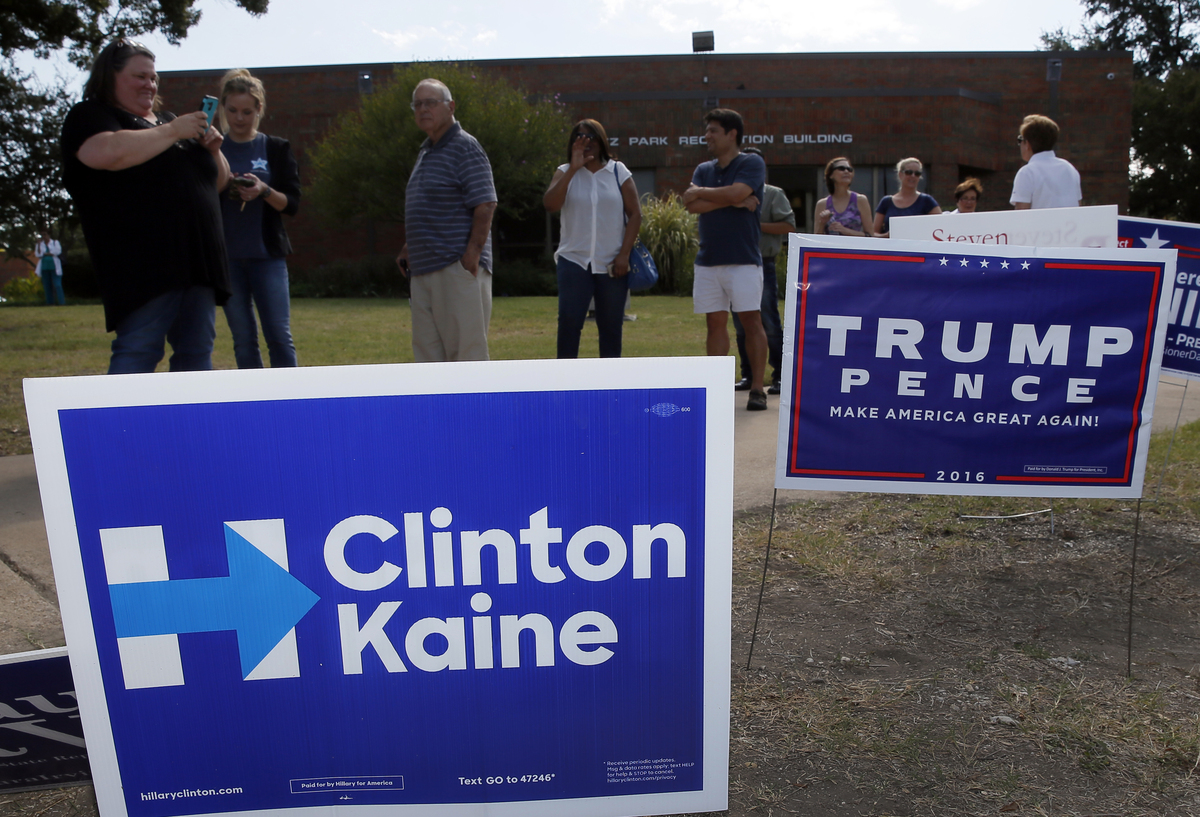 Voters wait in line to cast their ballots at in Dallas on Thursday.

Speaking at a rally in Tampa, Fla., on Wednesday, Hillary Clinton told the story of a leukemia patient named Steven who "ditched his oxygen tank," as Clinton told it, to vote early.

"If Steven can do that, nobody has any excuses," she chided the crowd.

The Clinton camp is putting a hard push on to turn out the vote before Nov. 8. The number of people taking advantage of early voting could hit record levels this year. Here's a primer on early voting:

1. How many people will vote early this year?

Potentially a record number. Early voting has grown quickly. In 2000, fewer than 1 in 5 voters cast their ballots early. This year, it could be nearly 4 in 10, with 37 states plus the District of Columbia allowing some form of early voting. (Some estimates say 34 percent and others go as high as 40 percent.)

That could mean some 40 million to 50 million people (or more) could vote early.

Early voting has steadily caught on, but restrictions have tightened and loosened over time, depending on the state. For example, in 2013, Colorado joined Washington and Oregon as a vote-by-mail state. And an August court decision in Wisconsin struck down laws that had restricted early voting to weekdays only and had restricted the number of early voting polling places to one per city.

Meanwhile, Arizona has passed a law saying that only direct family members and caregivers could turn in someone's ballot; giving it to anyone else is a felony. That may not seem like a big deal, but it reduces the avenues by which some people can vote, a Democratic official argued to CNN, because it stops party offices and volunteers from collecting ballots to turn them in. Nebraska and Ohio likewise cut the number of early voting days.

2. Does it increase turnout?

Surprisingly, it's not clear that it does — in fact, some research says it might even decrease it.

Studies on this have turned out to have scattershot results. On the one hand, a 2008 paper assessed the research and found that early and absentee voting together have "a small but statistically significant impact on turnout," somewhere between 2 and 4 percent.

In addition, it found that wealthier and more educated people were more likely to take advantage of early voting. Same-day or Election Day registration in combination with early voting, it found, was the solution to this drop in turnout.

In a February blog post, MIT political scientist Adam Berinsky summarized other studies that likewise showed early voting does not boost turnout. The real hurdles to voting, he said, have nothing to do with physically getting to the polls.

"The more significant costs of participation are the cognitive costs of becoming involved with and informed about the political world," Berinsky wrote. He elaborated, "Political interest and engagement, after all, determine to a large extent who votes and who does not."

3. What does it say about who will win the election?

Only a little. Every day, they give a little more information, but it's still only a bare sketch of how things might ultimately turn out. After all, the results only tell what party the ballot recipients belong to, not for whom those people are voting. And there are tens of millions of independent voters who will turn in ballots.

Furthermore, only a few battleground states publish voting data by party ahead of time. And those results are mixed.

In Nevada, for example, Democrats seem to be slightly ahead of where they were in the first week of in-person early voting in 2012. Meanwhile, Republicans are roughly where they were with absentee/mail-in ballots.

The First 100 Days: What Clinton And Trump Want To Get Done

Likewise, Democrats are doing better than expected in Florida, as Politico reported this week, and they have a strong lead in North Carolina.

Iowa is a mixed bag: On the one hand, Iowa's Democrats are beating Republicans so far, with around 46.5 percent of ballots to the GOP's 33 percent. That's right around where Democrats were at this point in 2012.

Then again, early voting is way down this year in Iowa overall from where it was in 2012 — and it's down more for Democrats than for Republicans. The number of Democratic ballots returned is down by 14.8 percent from this point in 2012, compared with Republicans' 8.8 percent decline.

Of course, given that a majority of votes nationwide are still cast on Election Day, any of these races could still potentially tip in the opposite direction. Democrats have a strong lead in early voting in North Carolina right now, but then, they did in 2012 early voting as well. And Republican Mitt Romney went on to win the state.

This is an important point to remember when reading early voting numbers: Even a big lead now doesn't mean a big win on Nov. 8.

4. Do different types of voting tend to lean more toward one party than the other?

However, Republicans lead in mail-in votes, 42 to 39 percent, while Democrats lead in early votes, 43 to 39 percent (the rest are other or no-party votes).

5. How does this affect campaigning?

The more votes are cast before Nov. 8, the more work Clinton and Donald Trump will have wrapped up by Election Day. As early voting expert Paul Gronke told NPR, that changes campaign strategy.

"This is going to change the dynamics in [early voting] states so that you will expect to see early rallies timed when the early voting period opens up, likely in Florida, Ohio, North Carolina," he said. "The candidates' travel schedule will reflect this, because they want to follow up that kind of enthusiasm and get people to the polls right away."

Because Florida and Ohio have heavy early voting, Trump and Clinton will want to hit those states first.

Pennsylvania, meanwhile, requires people to have an excuse to vote absentee, meaning most people have to wait until Election Day to vote. So it makes sense that Clinton has been pushing early voting in Florida this week, while Trump and Democratic vice presidential candidate Tim Kaine are swinging through Ohio; it makes more sense to be there now.