Accessibility links
Agreeing On More Money For Roads, Bridges May Be Easier Than Finding Workers Both Hillary Clinton and Donald Trump say they would spend more to rebuild the country's aging infrastructure. The problem is there may not be enough people with the right skills to fill those jobs. 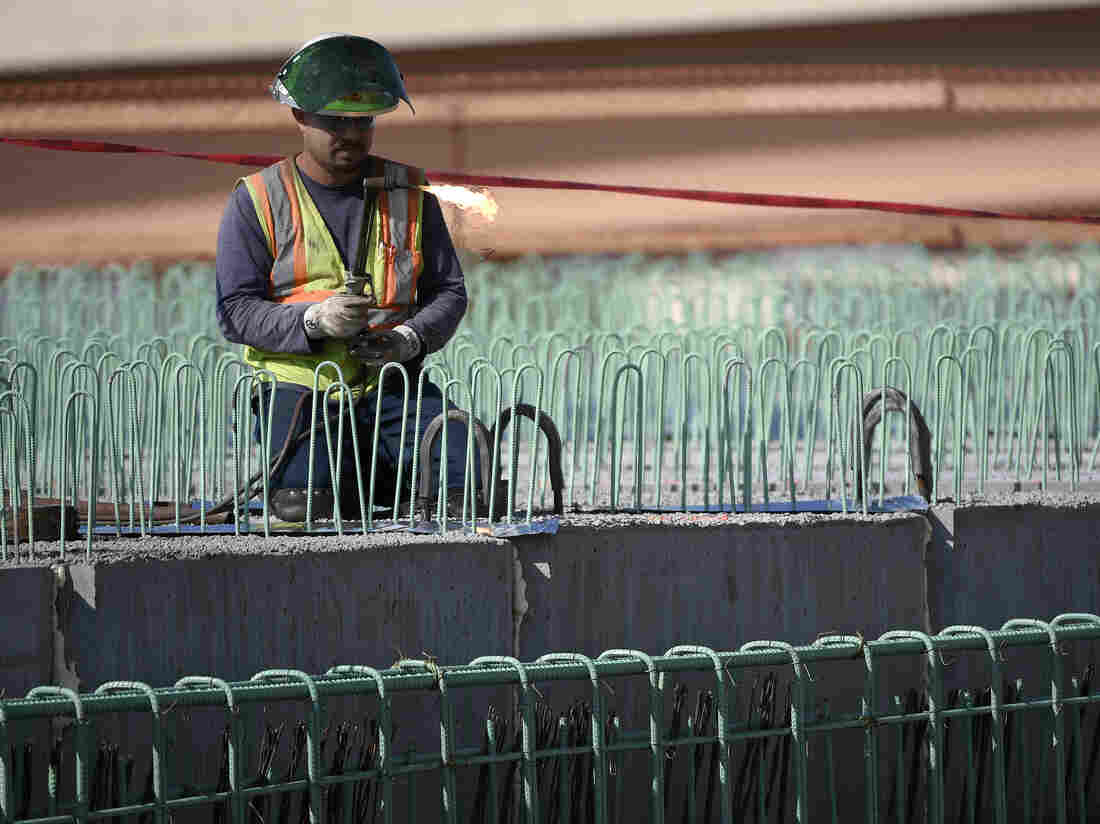 A worker uses a blowtorch on an interchange bridge in Englewood, Colo., on Aug. 25. Construction workers for infrastructure projects around the country are in short supply. Seth McConnell/Denver Post via Getty Images hide caption 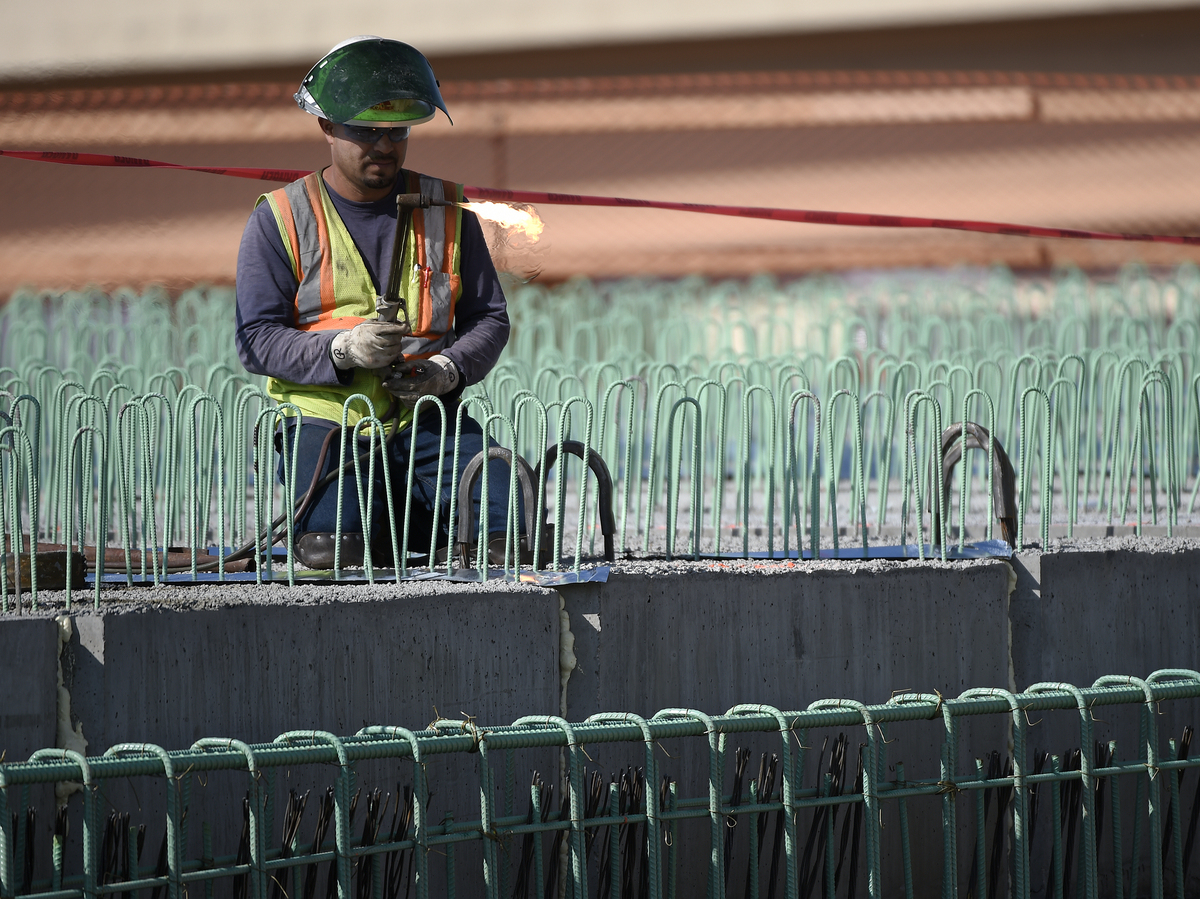 A worker uses a blowtorch on an interchange bridge in Englewood, Colo., on Aug. 25. Construction workers for infrastructure projects around the country are in short supply.

There aren't many things the two major presidential candidates agree on, but here's one: Both Hillary Clinton and Donald Trump say they would spend more to rebuild the country's aging infrastructure.

Clinton proposes spending $275 billion over five years, and setting up a national infrastructure bank to leverage some of the funds to induce more private funding for additional projects. Trump is proposing tax credits to encourage private investment of up to $1 trillion over a decade.

Their plans are short on specifics, such as how they would fund the projects, though Clinton suggested it would come, in part, from raising taxes on wealthy individuals. Aside from funding, there is also a question about how to find the skilled labor to build all those roads and bridges — a labor pool that is already in short supply.

"Two-thirds of commercial construction firms in the country report they are having a hard time finding qualified workers to hire," says Brian Turmail, a spokesman for the Associated General Contractors, a trade group that represents infrastructure builders.

Meanwhile, the American Society of Civil Engineers, which grades the country's infrastructure systems, gave it a D+ in its most recent report, citing overdue maintenance and a need for modernization. In 2013, it estimated the need for new infrastructure spending by 2020 at $3.6 trillion.

Turmail says, in reality, U.S. spending since the $140 billion in post-financial crisis stimulus spending on infrastructure has been relatively low. Construction employment in the country is at about 6.6 million — which Turmail says is below the pre-recession peak of 7.7 million, but sufficient to sustain today's low levels of investment. 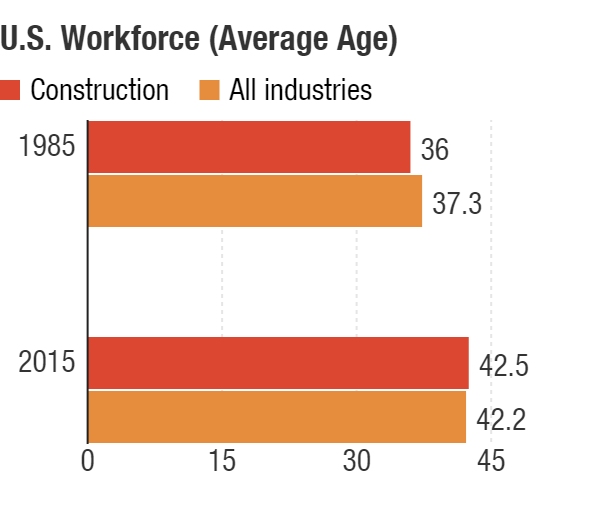 Construction workers are typically younger than the average of the overall workforce. But the trend reversed after the Great Recession as fewer young workers entered the industry. NPR/The Center for Construction Research and Training hide caption

The problem is less about meeting the labor needs of today, but planning for what might be next. About 40 percent of those workers are baby boomers aging into retirement — and Turmail says there aren't enough young people lining up to replace them. Job fair attendance is low, and although construction is a well-paying industry, it hasn't been drawing young people in.

"One measure that we see is that the average age of a new construction worker in this country is 28," he says, not the young high-school graduates of before. "And that tells us that most people view construction as a career of last resort."

One reason, he says, is that over the years, educational institutions cut back on training programs.

"There was a point in time when virtually every school system in the country had what was then known as vocational education, which was an incredible pipeline for manufacturing and for construction trades," he says. 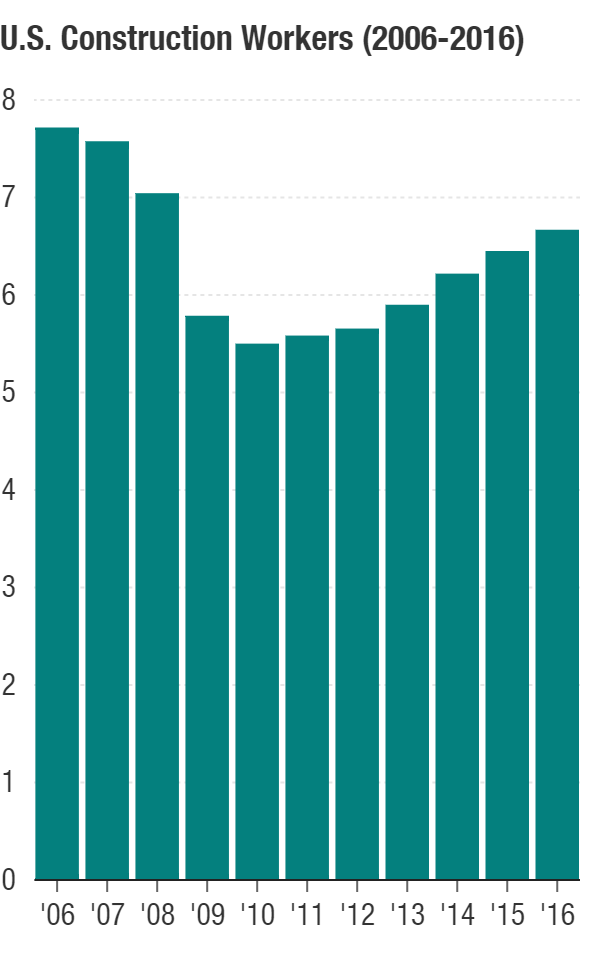 Note: Seasonally adjusted, in millions, for September of each year. NPR/Bureau of Labor Statistics hide caption

Turmail says there are potential sources of new labor, should spending increase under a new presidential administration.

Firms are recruiting veterans and laborers who left during the Great Recession and found work in the energy sector. Cities and states are already working with schools to revive vocational and on-the-job programs that could address demand in the longer term. Companies would keep raising wages and pay more overtime to attract more new workers.

This is true for JAR Construction in El Paso, Texas, where Angelica Rosales is director of business development. She says the company attracts and retains workers by paying wages above market rates. But there are still jobs, especially in the field, that remain open.

"Concrete finishers is a position that you can pretty routinely see us posting for, that's a necessity on our projects," she says.

She says El Paso also draws from workers living or commuting from Juarez, Mexico. Still, she worries about the pending retirements of key workers — one in particular with decades of experience.

"Kind of the ongoing joke here is that we're not going to allow him to retire, because he is just such a wealth of knowledge," Rosales says.

The City of El Paso has an on-the-job training program for apprentices, which is creating a pool of new prospects. And Rosales' firm recently started offering tuition reimbursement as a recruitment tool.

"The problem that you see in a community like El Paso is that a lot of the students will leave the region," so the company turned to the University of Texas in El Paso's engineering school to recruit, she says.

Since starting the program, she says, JAR Construction has hired two recent graduates.

It's Infrastructure Week: More Potholes Than Tax Dollars To Fill Them