Accessibility links
Combating Corruption: U.S. Customs And Border Protection Seeks Deep Reform The U.S. Border Patrol expanded after Sept. 11, but was soon plagued with corruption. A new leader is trying to turn around the agency. We visited field agents to explore if the reforms are working.

U.S. Customs and Border Protection—the nation's largest law enforcement agency—is attempting to reform itself. Washington spends $13 billion on border control and immigration enforcement, more than every other federal law enforcement force combined. Yet the huge agency—with 56,000 gun-toting agents—is dogged by complaints that too many of them will take a bribe or use excessive force and avoid consequences.

Under the leadership of Customs Commissioner Gil Kerlikowske, who was confirmed in March 2014, the agency is trying to bring about more transparency and accountability, and train its personnel to de-escalate violent encounters.

Agents who work on the border every day contend that it's unlike any environment in American law enforcement.

Controlling A Culture With Deadly Use-Of-Force

On a hot October day, a patrol boat speeds along the Rio Grande between curtains of thick Carrizo cane. Mullet fish flop in the muddy water and white egrets fly ahead.

"All kinds of people throw rocks at us, even little kids still in Pampers, they see us and lob rocks at us," boat captain Agent Omar Puente says. "There's been areas in Weslaco [Texas] where we were parked and 10 guys show up at the banks and throw rocks at you. It's a thing to do I guess."

While Puente steers, agent Guillermo Mata scans the riverbank, shouldering an M-4 assault rifle. He's asked, how does the agency's new emphasis on avoiding use of force affect his job?

"I guess the main goal would be to try to remove yourself from the [rock-throwing] area first," he says. "That's personally the change that I've seen."

CBP knew it had a use-of-force problem. It asked the respected Police Executive Research Forum, a best-practices policy group, to look at 67 fatal shootings by border agents between January 2010 and October 2012.

The forum concluded that some agents were firing at moving vehicles and rock throwers even though they posed no lethal threat.

In an attempt to reduce shootings, CBP has handed down stricter rules on use of force in 2014. 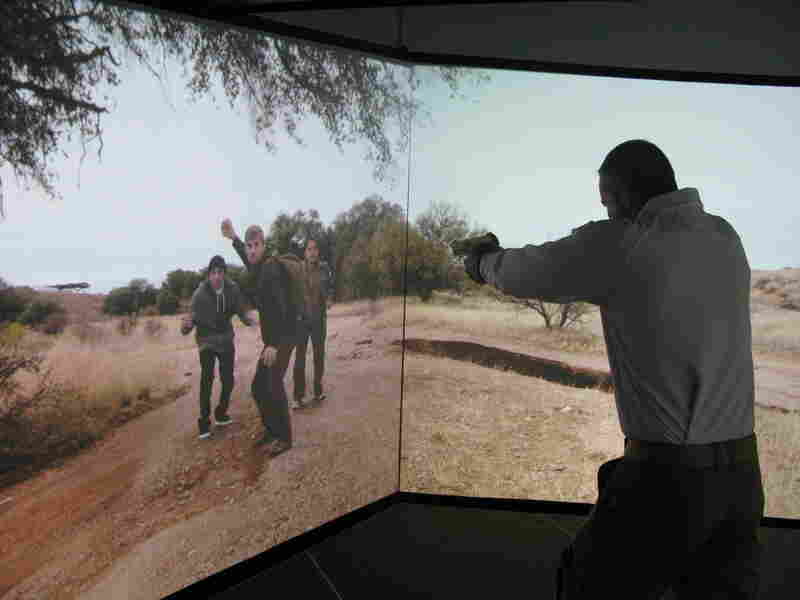 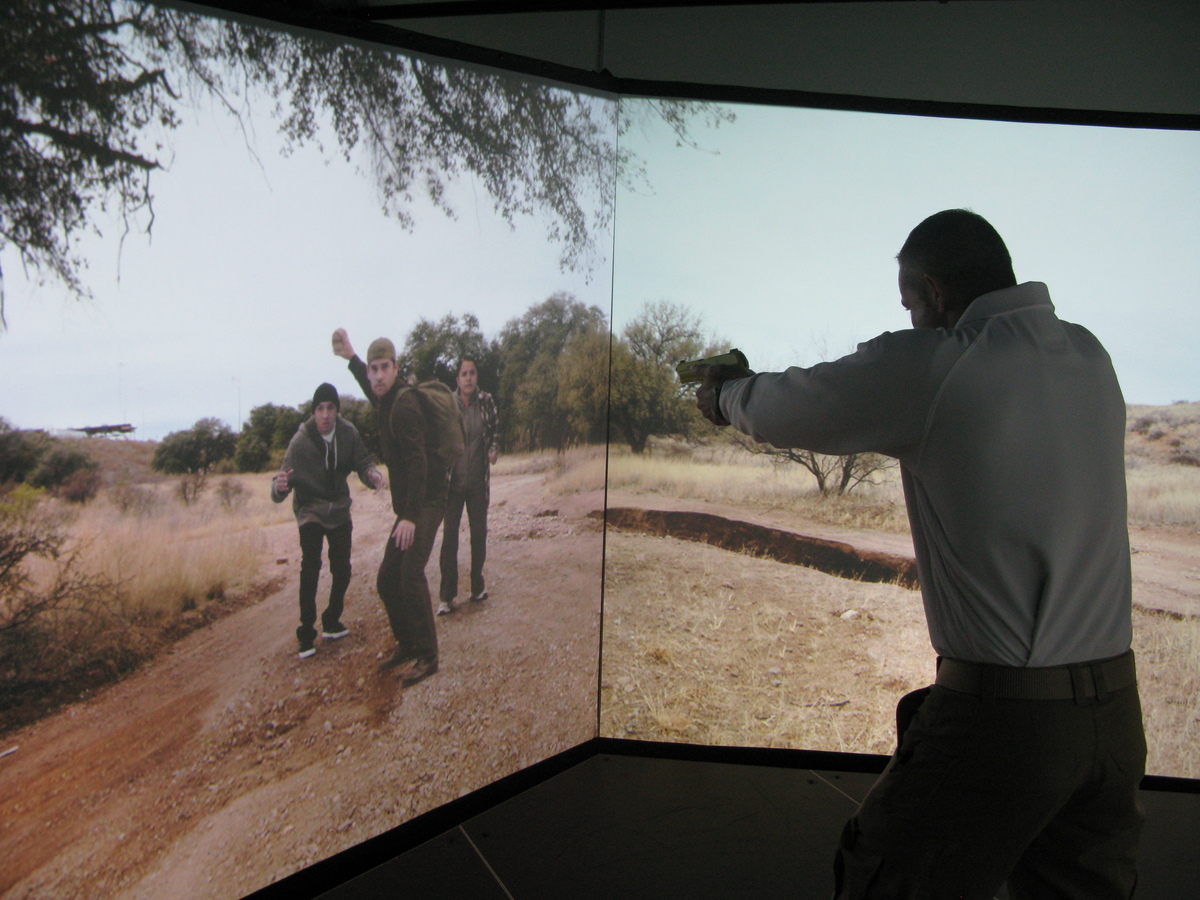 In order to reduce shootings, all Border Patrol agents are now required to train in a simulated environment complete with immigrants threatening rocks. Agent Aaron Sims trains on the simulator at the CBP National Training Center in Harper's Ferry, W.V.

What's more, the agency has created interactive training scenarios that mimic confrontations with rock-throwers that every sworn officer must undergo.

At the CBP National Training Center in Harper's Ferry, West Virginia, Supervisory Agent Aaron Mims stands inside a surround green-screen, facing the image of a group of immigrants walking through a desert landscape. The leader picks up a rock and shouts tauntingly. Mims points his taser at the man.

"Hands up! Don't move! Drop the rock!" he shouts before pulling the trigger on the taser. In the interactive scene, the immigrant falls to the ground and moans.

"As an agency, lethal force is always the last resort," Mims says after the training scenario is over.

This type of training is an attempt to avoid incidents like the death of Sergio Hernandez Guereca.

On June 7, 2010, the unarmed Mexican teenager was standing on the Juarez side of the international river when he was shot and killed by Border Patrol agent Jesus Mesa, who was on the U.S. side in El Paso, Texas. The agent maintained the boy was throwing rocks, though cellphone video contradicts this account.

Neither CBP nor the Justice Department decided to take action against the officer.

On a visit last week to the teenager's mother, Maria Guadalupe Hernandez, stands in Sergio's room in her rundown house in Juarez, wearing a bright red T-shirt with her son's name and the date he died. 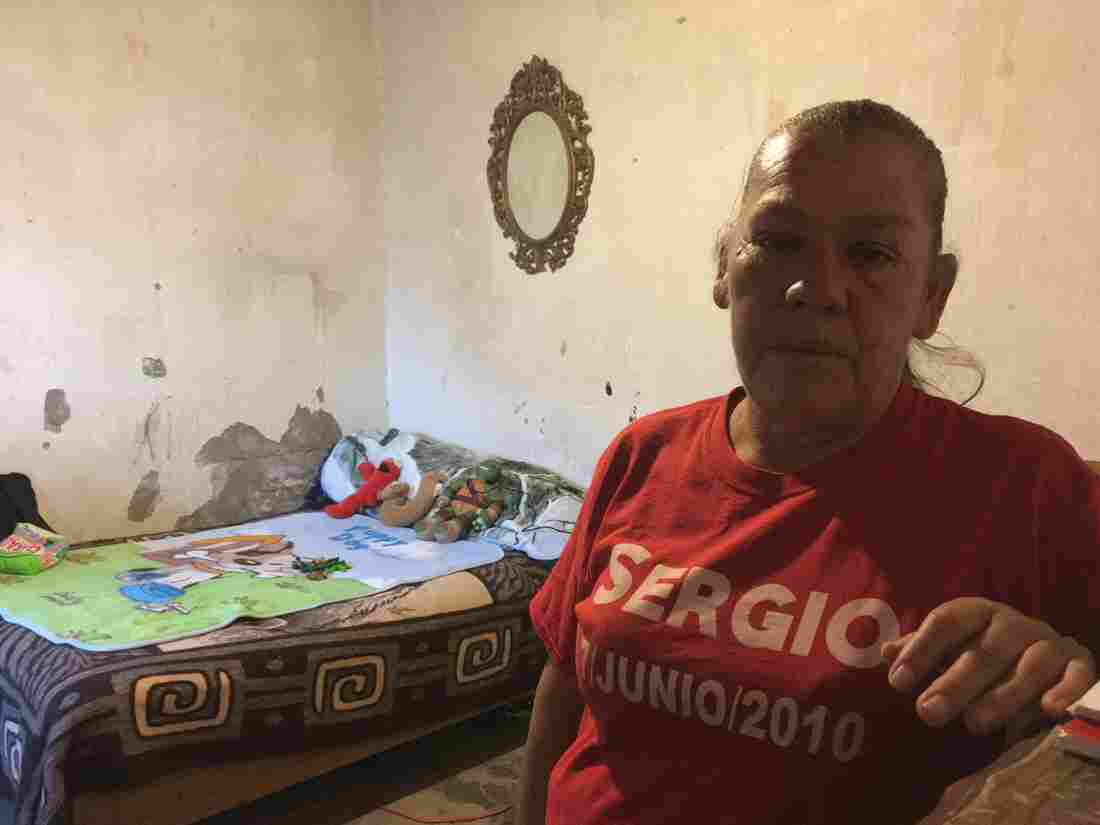 Maria Guadalupe Hernandez stands in the room of her son, Sergio, 15, who was killed in 2010 by a Border Patrol agent shooting from El Paso, Texas, across the river, into Juarez, Mexico. The agent believed the teenager was throwing rocks. Monica Ortiz-Uribe/Monica Ortiz-Uribe for NPR hide caption 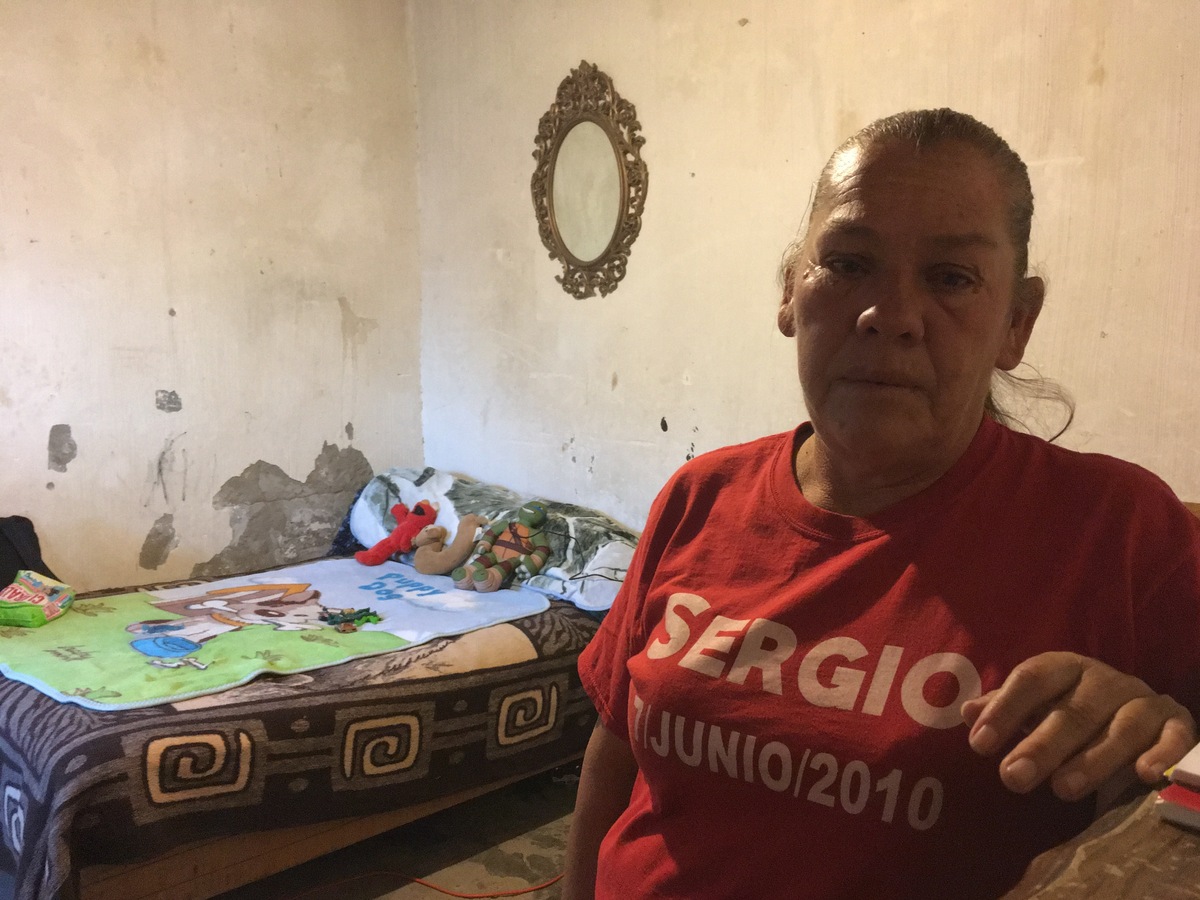 Maria Guadalupe Hernandez stands in the room of her son, Sergio, 15, who was killed in 2010 by a Border Patrol agent shooting from El Paso, Texas, across the river, into Juarez, Mexico. The agent believed the teenager was throwing rocks.

The U.S. Supreme Court will decide this term whether Guereca's parents have a constitutional right to sue the federal officer in civil court.

CBP has so far reopened and reinvestigated 55 past officer-involved shootings—all with no new action taken—but six years later, the Guereca case remains open.

Chris Rickerd, an ACLU lawyer in Washington, D.C., who monitors Customs and Border Protection, says there has to be truth in order for there to be reconciliation.

"You can't turn the page on all these problems in the past, all these incidents that led to incredible suffering for families without looking back and being transparent and accountable for what went wrong before," he says.

Despite CBP's continued silence on the highest-profile cross-border shootings, the agency has made important changes going forward. 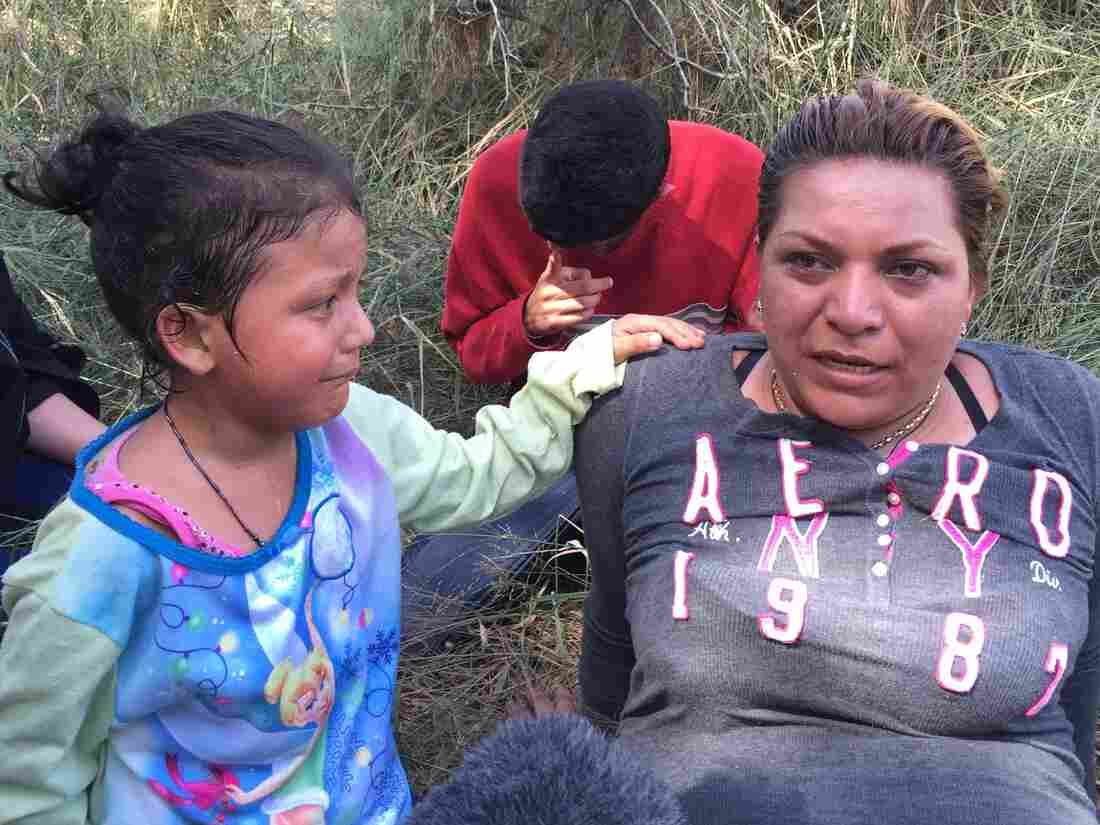 The Border Patrol apprehends a Salvadoran mother and her frightened daughter with a group of seven Central Americans down by the Rio Grande. John Burnett/NPR hide caption 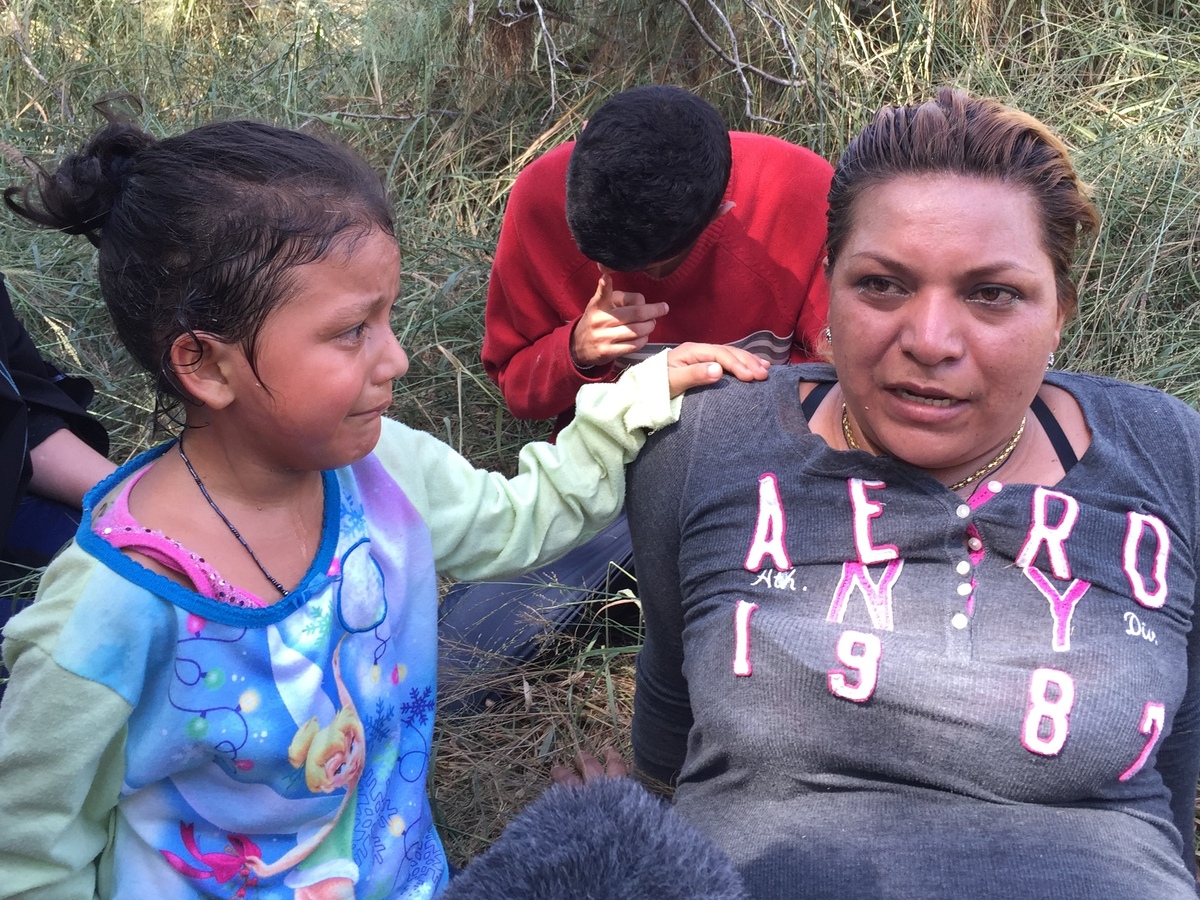 The Border Patrol apprehends a Salvadoran mother and her frightened daughter with a group of seven Central Americans down by the Rio Grande.

The challenge is how to change the culture of an agency that believes in its own exceptionalism — a cross between a police agency and an anti-terrorism force.

"I think there has been some progress but not enough," says James Tomsheck, a former director of CBP internal affairs for eight years.

"In the 40 years I spent practicing law enforcement in three different agencies, it was my experience that the Border Patrol had an identity and culture that was very different from the rest of U.S. law enforcement," he adds. "They were an agency that had not always been held accountable."

The Border Patrol traces some of its problems to the mandate to double its size under President George W. Bush. Tomsheck says some agents were hired who never should have pinned on a badge.

"We came to clearly understand that many of those persons who sought out positions with Border Patrol and Field Operations were doing so solely for the purpose of criminal opportunities and profit," Tomsheck says.

An internal CBP website, Trust Betrayed, lists 177 agents arrested for official misconduct, frequently narcotics and human trafficking, from 2004 to 2015. That works out, on average, to more than one agent arrested every month for 11 years — a much higher rate than other federal police forces.

CBP Commissioner Gil Kerlikowske acknowledges in an interview with NPR that the Southwest border is a temptation-rich environment.

"Most customs and border security officials can be vulnerable to bribes and corruption," Kerlikowske says, "and we have to make sure, one, that we're hiring the right people, but two, we have the checks and balances in place to make sure we don't have those problems."

He mentions the creation of the FBI's Rio Grande Valley Public Corruption Task Force, which is charged with uncovering misdeeds at the local, state and national levels.

CBP has tried to root out bad agents through periodic polygraphing, but the Border Patrol union has resisted this and other reforms sought by the new administration.

A Border Patrol agent has been implicated in one of the latest, most lurid drug crimes in the Rio Grande Valley. On March 17, 2015, a fisherman made a grisly discovery. In the inner bay of South Padre Island, dotted with cantinas and high-rise condos, he found the nude, headless body of a suspected drug smuggler floating in the bay.

"There was approximately a kilo of cocaine, $90,000 in cash, there was a ledger that included the sell price of different quantities of cocaine, there was weapons ... and a commemorative badge and papers and documents belonging to Joel Luna."

Luna, his two brothers, and two other men are charged with capital murder in the slaying. Agent Luna has pleaded not guilty.

"We don't want public confidence to be diminished. They see us and they see Luna," says Henry Leo, the agent in charge of the Harlingen Border Patrol station. "But the good thing is, we police ourselves and in some of the cases that I know about personally, it's been other agents that report it and take the lead in bringing this person down."

Critics of CBP welcome the changes, but they're cautious in their praise.

"It will take more than two and a half years to turn around an agency with that history," says Christian Ramirez, director of the Southern Border Communities Coalition. He points to Border Patrol highway checkpoints where motorists complain of racial profiling, and to ports of entry where agents are accused of roughing up people who cross.

"For border residents," he continues, "this agency is still viewed with mistrust."

For U.S. Customs and Border Protection, deep reform is a work in progress.