Accessibility links
He Couldn't Break The Record For Pumpkin-Growing — So He Broke Out A Paddle So, you've grown a pumpkin that weighs over 1,000 pounds. What now? For Rick Swenson, competitive pumpkin grower, the answer was clear: Get in and paddle it down the river as far as it'll go. 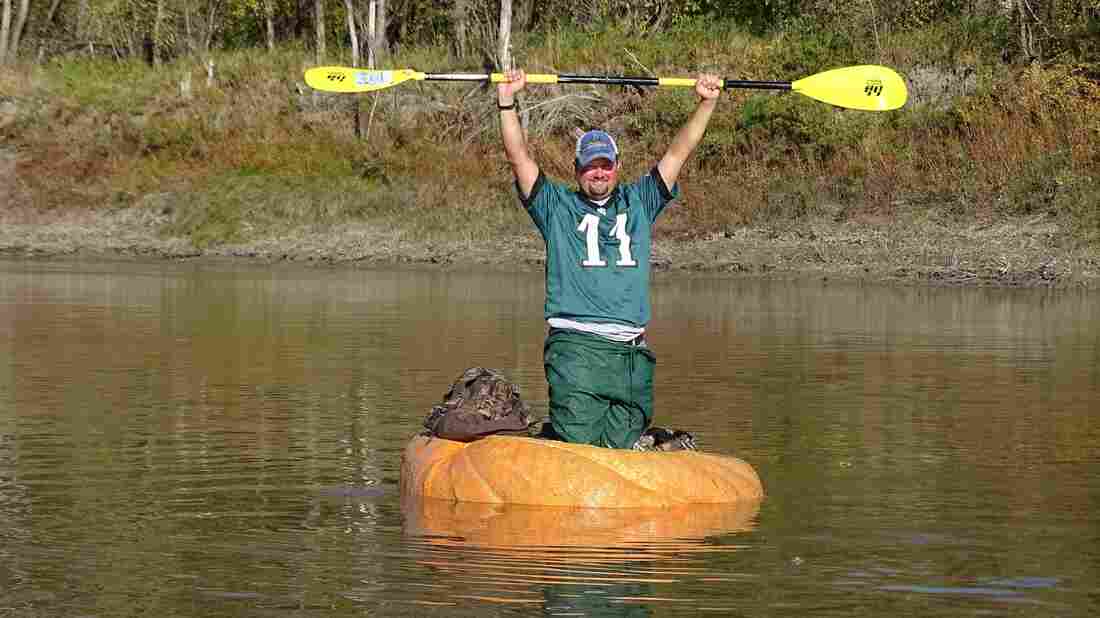 Rick Swenson, triumphant in his pumpkin. This photograph was taken when he unofficially broke the record at mile 15.2. Mark Peterson/Courtesy of Rick Swenson hide caption 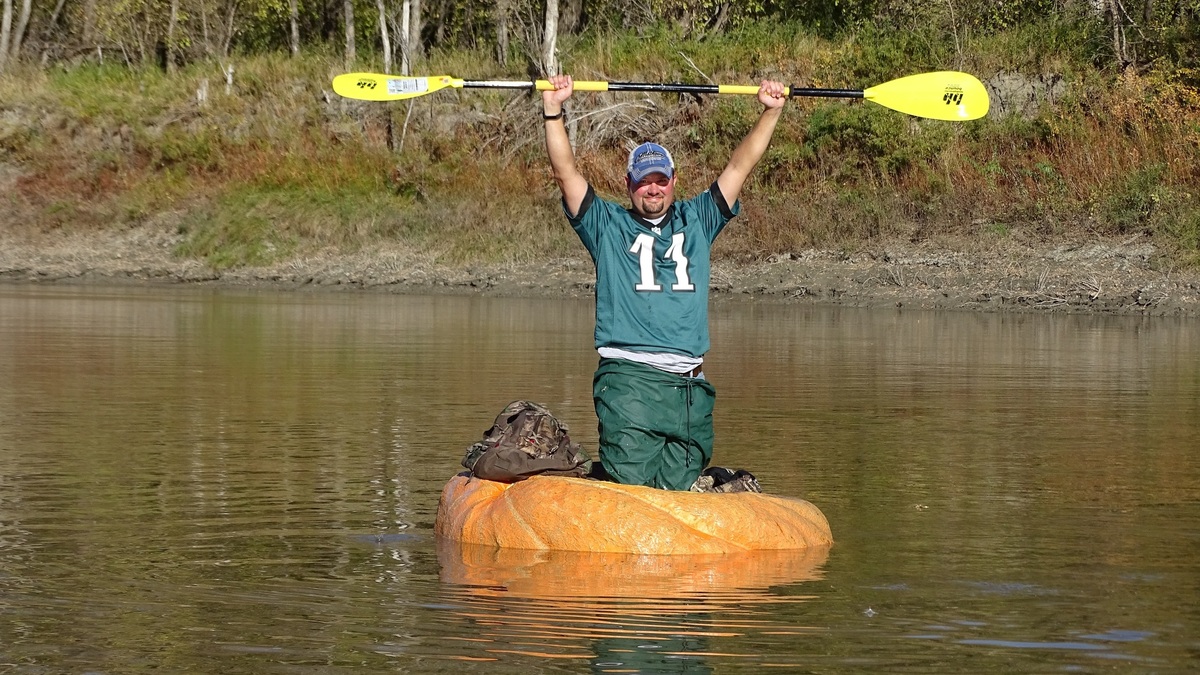 Rick Swenson, triumphant in his pumpkin. This photograph was taken when he unofficially broke the record at mile 15.2.

It was almost too much for Rick Swenson to take.

First, his friend smashed a car by dropping a 1,400-pound pumpkin on it at a charity event — then he had to stand by as that same friend smashed Swenson's personal record by growing another 1,400-pound monster. Swenson, a competitive pumpkin grower from Minnesota, couldn't just let his friend one-up him like this.

So, Rick Swenson cultivated an idea to take back bragging rights: He would go for the world record for the longest distance paddled in a giant pumpkin. Yes, apparently that's a thing.

But first, let's rewind: Swenson grows giant pumpkins, big enough to fill your yard. They can pack on 50 pounds a day — and just a few weeks ago, a Belgian grower tipped the scales at 2,624 pounds. Many of these behemoths are a special breed, the Dill's Atlantic Giant, which has been crossbred for decades, and growers from around the world pay hundreds of dollars for seeds from record-winning pumpkins like these.

"There's some websites that keep track of the lineage of these different weigh-offs," Swenson explains, "and I know you can go back at least 10 to 12 generations and see who the parents were from many, many years ago."

Swenson says it's the little things that growers do to care for the pumpkin that make it plump up. Like pruning — as much as 500 times for a single plant — and covering each pumpkin at night with a warm blanket. Though: "I don't quite sing to them," he admits.

When Swenson saw he wasn't growing a record-winner this year, he decided to take his 1,100-pounder out on the Red River between Minnesota and North Dakota earlier this month. He hollowed out the pumpkin, making a hole 2 1/2 feet deep where he could put his feet as he sat on the edge and paddled.

He planned to go 8 miles, but at the last minute, a text came in.

"I got a text that the record had been broken the previous week in Washington state at 15 miles," he says. "And that really took the wind out of our sails." (So to speak.) 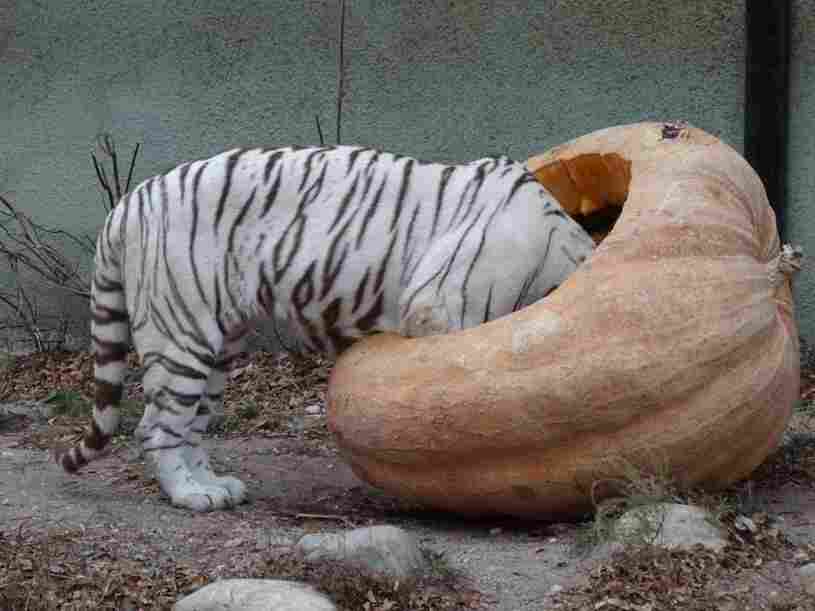 This photograph taken a few years ago at the Chahinkapa Zoo in Wahpeton, N.D., gives a good sense of the fate that awaits Rick Swenson's monster pumpkin this year: It's soon to be tiger food. Kathy Diekman/Courtesy of Chahinkapa Zoo hide caption 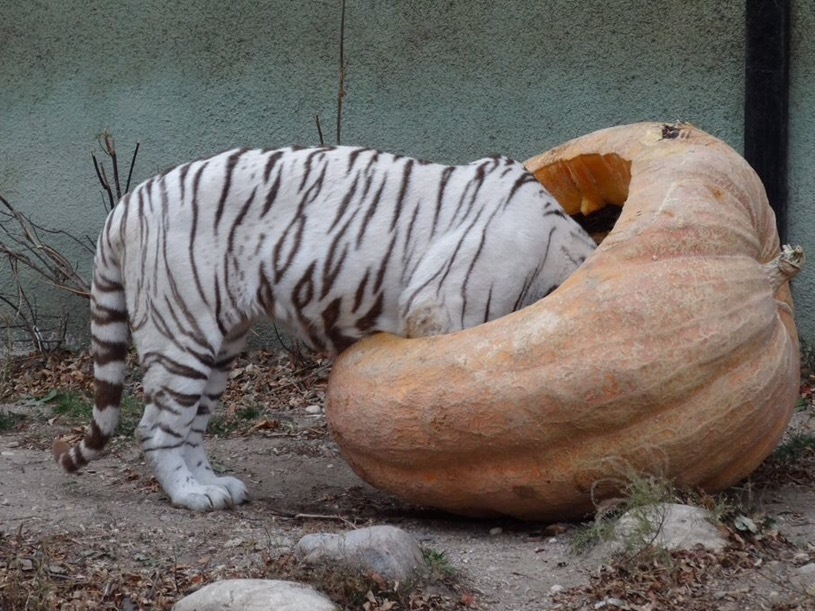 This photograph taken a few years ago at the Chahinkapa Zoo in Wahpeton, N.D., gives a good sense of the fate that awaits Rick Swenson's monster pumpkin this year: It's soon to be tiger food.

Since giant pumpkins don't make good pies, when it came time to retire the trusty 1,100-pounder, Swenson had another idea. He donated it to the Chahinkapa Zoo in Wahpeton, N.D., for its Halloween party — the (wait for it) Zoo Boo.

"Then, when it's all said and done they'll feed them to the animals," he says. "And I tell you what, there's nothing like seeing a whole Bengal tiger disappear inside your pumpkin."

Swenson says he's ready to take a break from pumpkins for a while. He has kept his Halloween decorations to a minimum. He says that, living out in the country as he does, he hasn't had a trick-or-treater in the past six years.