Accessibility links
Supreme Court To Hear Case Dealing With The Right To Have Service Animals In Schools The Supreme Court will hear Fry v. Napoleon Community Schools on Monday to decide if disabled children prevented from having qualified service animals at school can go directly to federal court. 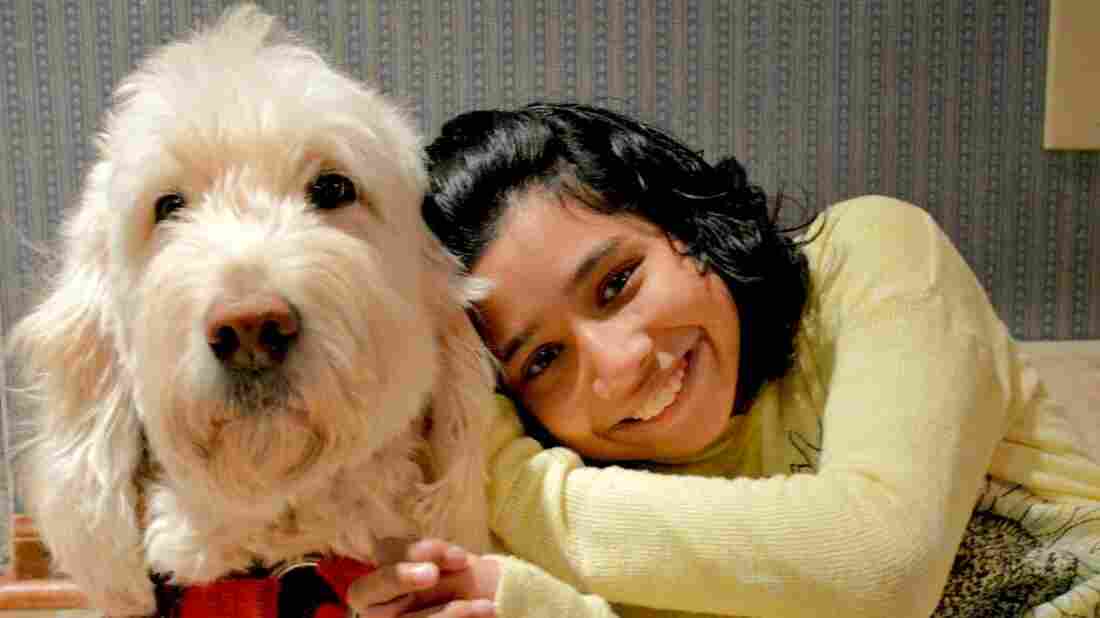 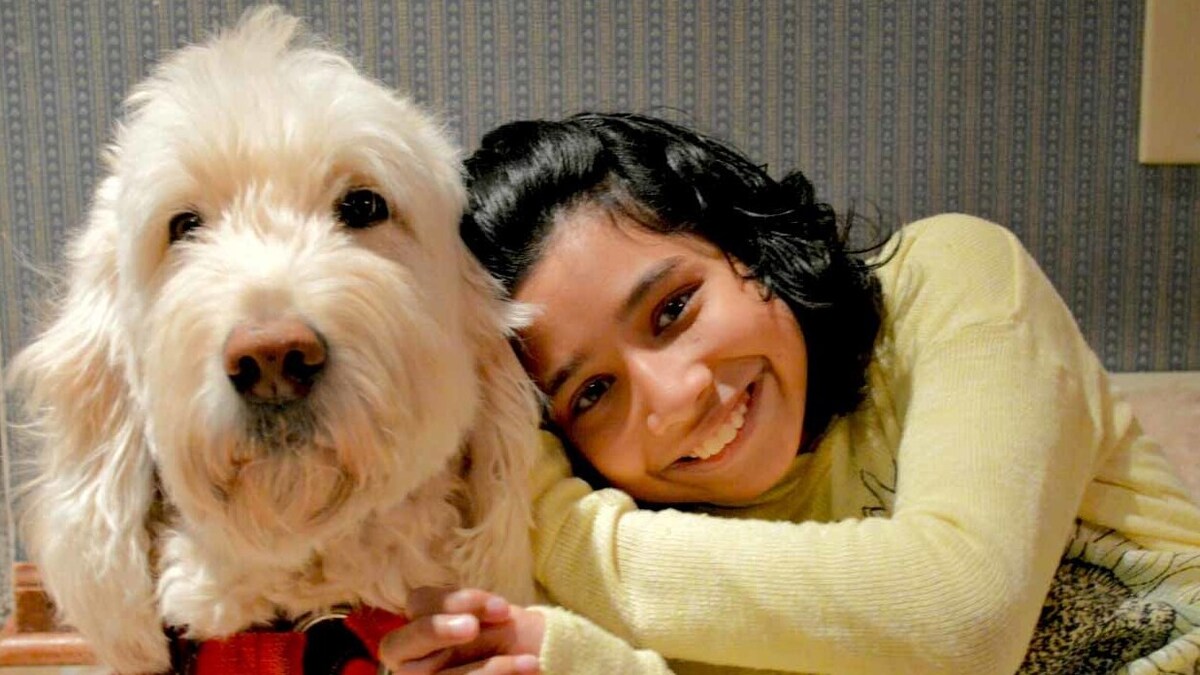 The U.S. Supreme Court on Monday takes up the case of a girl, her service dog and a school that barred the dog from its premises.

Ehlena Fry was born with cerebral palsy, a condition that significantly limited her motor skills but not her cognitive ability. So when she was 5, her pediatrician recommended that her parents get a service dog to help her become more independent. Family and friends threw fundraisers to scrape together the $13,000 needed for the right dog, and in 2009, Ehlena and her parents went to Ohio to train for two weeks with their new goldendoodle, a cuddly, big white pup named Wonder.

The Frys had talked to Ehlena's school about the dog, but when Ehlena brought Wonder to class with her, she was told the service dog was not allowed. 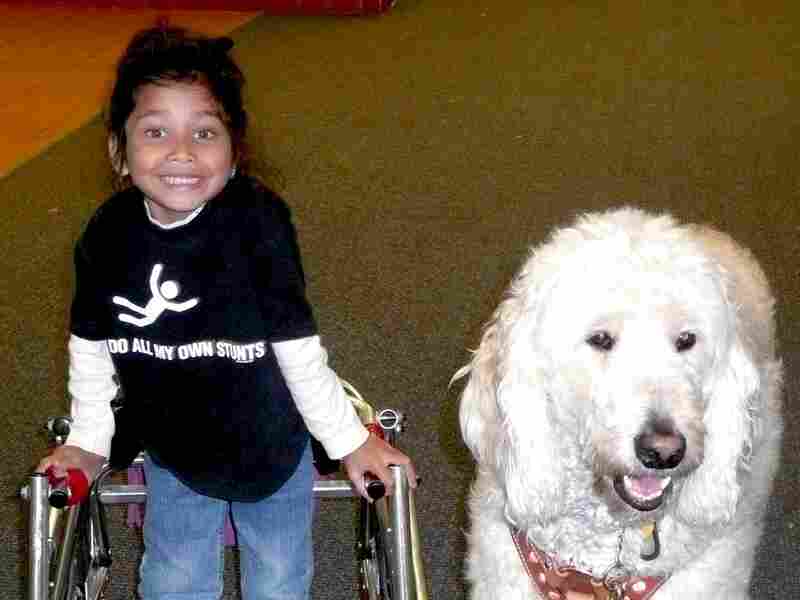 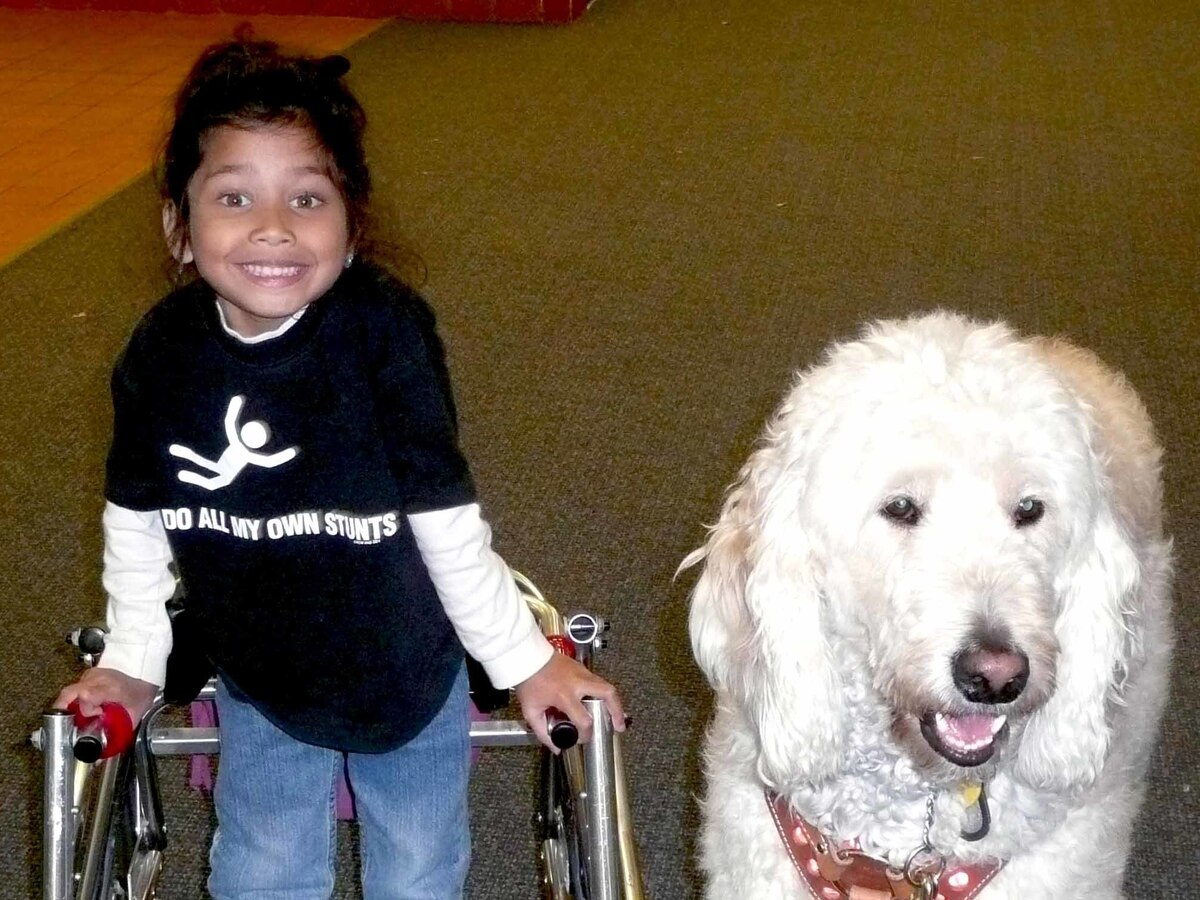 Ehlena Fry, then in kindergarten, stands with her service dog, Wonder.

School officials have refused to talk about the case, but their legal position is that under the Individuals with Disabilities Education Act, the district was already paying for an aide to help Ehlena physically in school and that the dog was unnecessary.

Ehlena's parents replied that the dog was not part of their daughter's education plan. He was intended to help her perform more functions by herself, to make her grow stronger and more independent.

Wonder was trained to hit handicap buttons for her, to open and close doors, to pick up items she dropped, and perhaps most importantly, to stabilize her so that she could make transfers from a chair to a walker, or from a walker to a toilet seat.

"One of our whole goals in getting Wonder for her was that eventually, the more she was able to use Wonder and navigate her environment, that she would need the aide less and less," says Ehlena's mother, Stacy Fry.

Early in the dispute, after mediation, the school agreed to a 30-day trial with Wonder, but Stacy Fry says the dog was not permitted to sit with Ehlena in class or to go with her to the lunchroom.

One of our whole goals in getting Wonder for her was that eventually, the more she was able to use Wonder and navigate her environment, that she would need the aide less and less.

Fry says the 30-day trial, in fact, was marked by one hostile act after another. "There was so much animosity," she says.

She says that Ehlena and Wonder were even required to demonstrate a toilet transfer with adults from the school watching, an experience that Stacy Fry says was devastating and traumatic for her daughter.

After the 30-day trial, the school returned to its no-dog policy. Although Wonder is a hypoallergenic breed, the school said among other things that two children and one teacher were allergic to dogs, and that one child had a dog phobia because he had previously been attacked by a dog.

So the Frys home-schooled Ehlena and then transferred her to another school district where Wonder was welcomed with open arms. He went to class with Ehlena and to lunch. He was in the staff section of the yearbook. He had his own ID card. He was in the class picture. And, says Ehlena's mother, the relationship between dog and kid was integrated into the school seamlessly.

"It was amazing, and they were so accepting," Fry observes. "It was such a teaching tool, for the other kids."

The Frys sued the old school district under the Americans with Disabilities Act and other federal laws. They sought unspecified money damages for the emotional distress they say their daughter suffered before transferring to the new school district.

Ehlena's mother says the suit is not about money, but is meant to forge a path for other children with service animals "so that they don't have to have what happened to my daughter happen to their child."

"That is success for us," Stacy Fry says.

Represented by the ACLU, the Frys want the Supreme Court to declare that, when disabled children are prevented from having qualified service animals at school, they and their parents can go directly to federal court.

But the school district, backed by the National School Boards Association, argues that to allow such suits could cost school districts millions of dollars. They note that 6 million disabled children are covered by the law that guarantees individualized special education for disabled children, and that that law requires parents to exhaust administrative appeals before going to court to challenge an education plan.

So far, the Frys have lost in the lower courts, as have parents like them in most parts of the country. But now their case is before the Supreme Court.

Ehlena will be there, with Wonder. The goldendoodle, after seven years of hard mobility work, has retired to a pet's life. Ehlena, now 12, is in middle school.

"He helped her bridge that gap," Ehlena's mother observes. "Working with him helped her to learn how to not need him as much."