Accessibility links
Cubs Stay Alive With A Win Over The Indians The Chicago Cubs beat the Indians 3-2 in Game 5 of the World Series at Wrigley Field on Sunday to send the best-of-seven championship back to Cleveland.

Cubs Stay Alive With A Win Over The Indians

Cubs Stay Alive With A Win Over The Indians 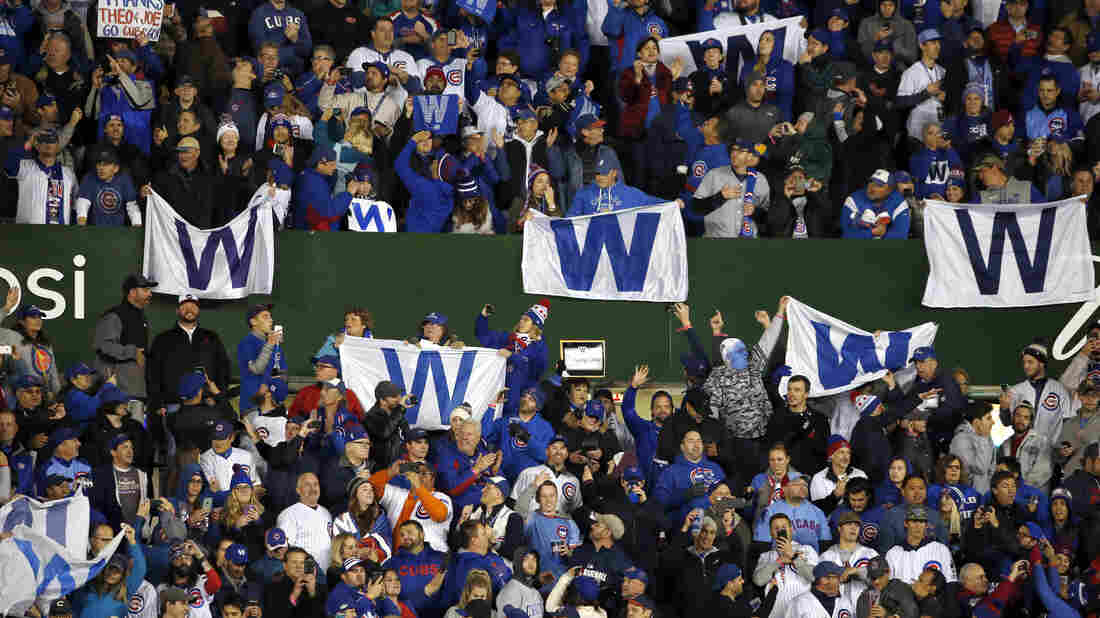 Chicago Cubs fans cheer after their team won Game 5 of the World Series against the Cleveland Indians by a score of 3-2 on Sunday. Nam Y. Huh/AP hide caption 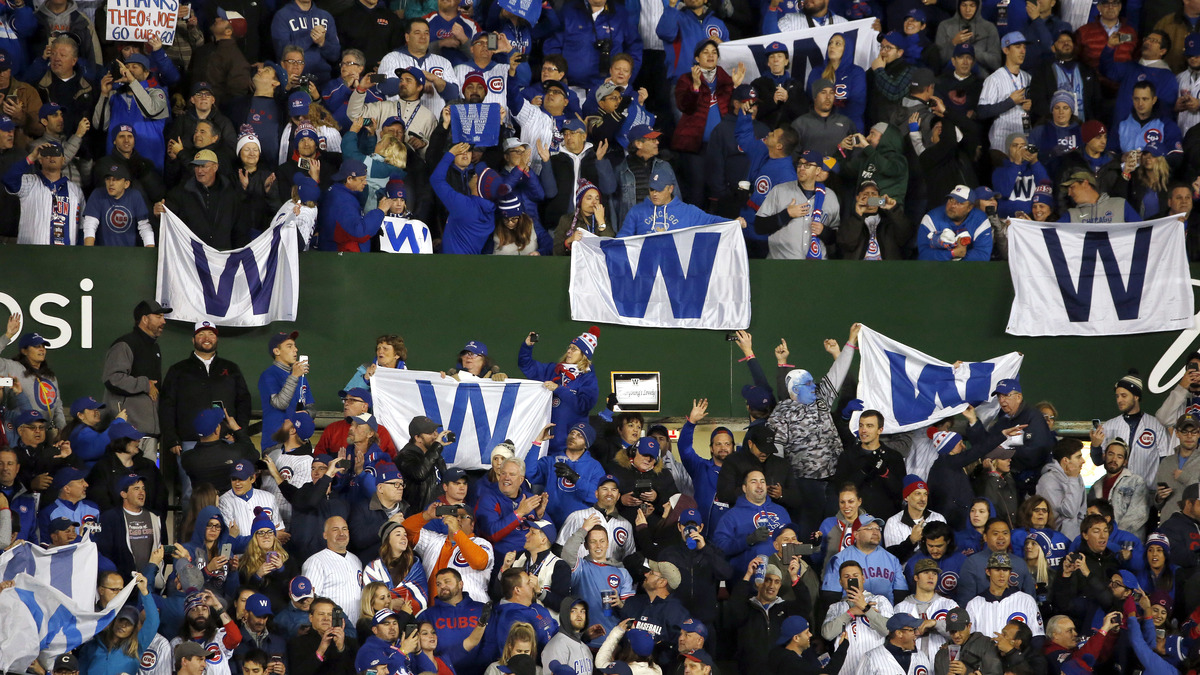 Chicago Cubs fans cheer after their team won Game 5 of the World Series against the Cleveland Indians by a score of 3-2 on Sunday.

The Chicago Cubs kept alive their World Series hopes by beating the Indians 3-2 in Game 5 at Wrigley Field on Sunday to send the best-of-seven Major League Baseball championship back to Cleveland.

The Indians lead the series 3-2 ahead of Game 6 on Tuesday.

Chicago's quiet bats came to life in the fourth inning with three runs, sparked by a home run from Kris Bryant and four more hits that followed, allowing the Cubs to hold on to the dream of winning their first World Series in 108 years.

With his team on the brink of elimination, Cubs ace starter Jon Lester turned in a strong six innings to reignite roars from the home crowd, and flame-throwing reliever Aroldis Chapman did a yeoman's job in registering the last eight outs to preserve the must win.

"It didn't feel like an elimination game," said 24-year-old third baseman Bryant. "Jon [Lester] doing his thing, Chapman coming in for eight outs. That was an unbelievable win."

Cubs first baseman Anthony Rizzo, who followed Bryant's blast with a double off the wall in right and came around to score, had a different take on the mounting tension in the win-or-go-home thriller. 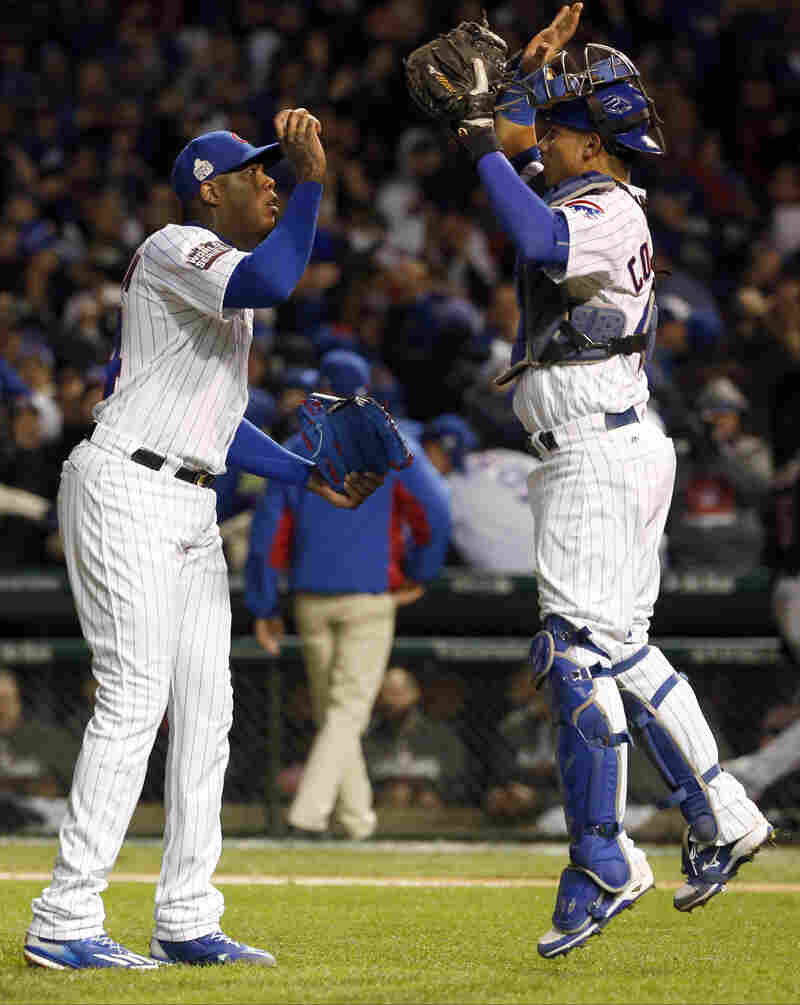 "High anxiety and a lot of deep breaths," Rizzo said about dealing with the pressure. "Every pitch gets bigger and bigger as the game goes on.

"Great win, to set these fans off with a win. Now we get to go back to Cleveland and take care of business."

Chapman, whose longest outing this season had been 2 1/3 innings, was asked to go one out longer when Cubs manager Joe Maddon brought him in with one out in the seventh, a man on first and a 3-2 score.

But the Cuban-born reliever poured his 100 mph-plus fastballs in to overpower the Indians, striking out four on his way to the critical save.

Lester, who yielded two runs on four hits while striking out five, registered the victory. Cleveland starter Trevor Bauer took the loss, his second of the Series.

Before the game, spirits did not seem as high among fans compared with the first two games played in Chicago, as revelers seemed subdued, wary of a third straight loss at Wrigley.

But by the end, the crowd was roaring, and after Jose Ramirez struck out to end the game, fans inside and outside Wrigley stood and sang the team song with the title dream still alive.

"I'm feeling amazing," Nicole Herrington, who lives a few blocks from the stadium with her husband and 4-month-old boy, told Reuters. "We can't believe that they are not [going to win].

Chicago's Jake Arrieta, the Game 2 winner for the Cubs, is scheduled to start Game 6 on Tuesday against Josh Tomlin, with a Game 7 to be played in Cleveland on Wednesday if needed.