Accessibility links
In Michigan, A Highway Sign Is At Center Of An Unusual Trademark Dispute A few years ago, two brothers emblazoned T-shirts with an image of the M-22 highway sign, getting a federal trademark. Now, the state is challenging that trademark in court. 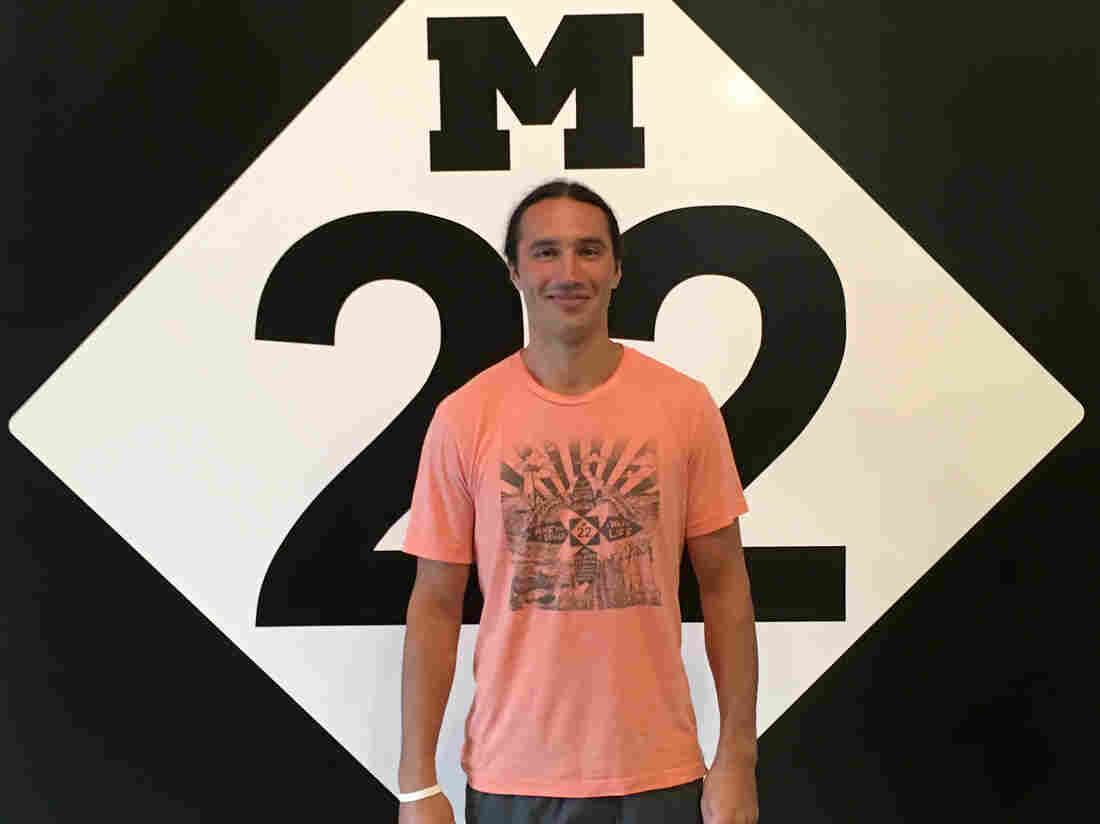 Matt Myers started the M22 business with his brother, Keegan. They trademarked the logo in 2007, but now the Michigan attorney general is challenging the trademark in court. Rick Pluta/Michigan Public Radio hide caption 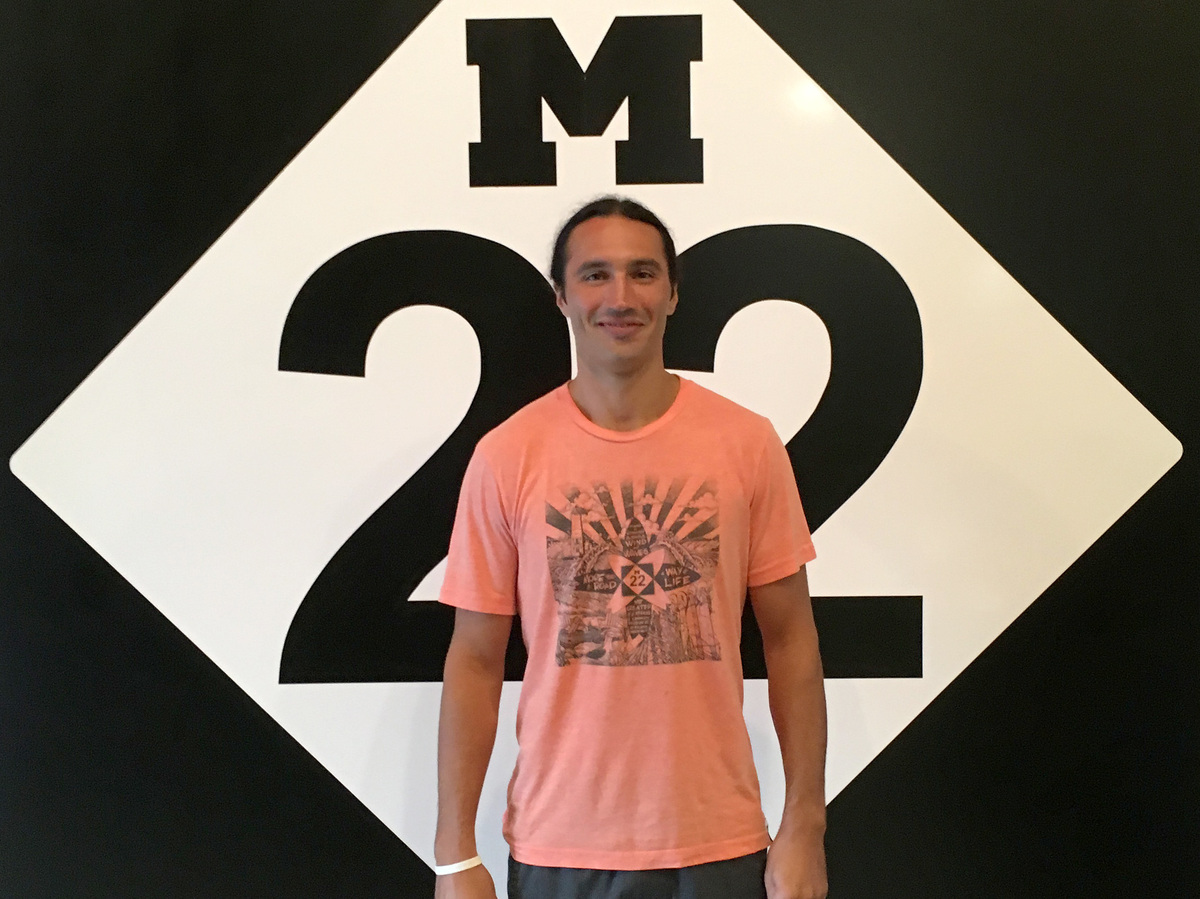 Matt Myers started the M22 business with his brother, Keegan. They trademarked the logo in 2007, but now the Michigan attorney general is challenging the trademark in court.

There's an unusual fight underway in Michigan over a simple black-and-white sign that identifies a state highway. That highway runs through a popular vacation region. And one business claims it has the exclusive right to use the road sign as a product brand.

But the state disagrees, and the trademark dispute is now in federal court.

The M-22 highway in northern Michigan is considered one of the nation's most scenic drives. For 116 miles, it hugs the Lake Michigan shoreline and offers stunning views of woodlands, cherry orchards and vineyards.

The M-22 highway sign has become iconic. The black-and-white logo graces cars and T-shirts, and even a wine label.

For visitors like Jodi Olson of Aurora, Ill., the M-22 logo is a happy reminder of being "up north" in Michigan resort country. She has an M-22 sticker on the upper left corner of the tailgate on her SUV.

"It's God's country, is what I say. It's beautiful. The water ... it's just absolutely gorgeous," she says.

The M22 business was started a dozen years ago by Matt Myers and his brother.

The brothers trademarked the logo in 2007. Myers says it protects their business and their customers from cheap knockoffs.

"It's all about the thought and the detail and the love and the passion that we've put into our brand. And that's what's made it into what it is today," he says. 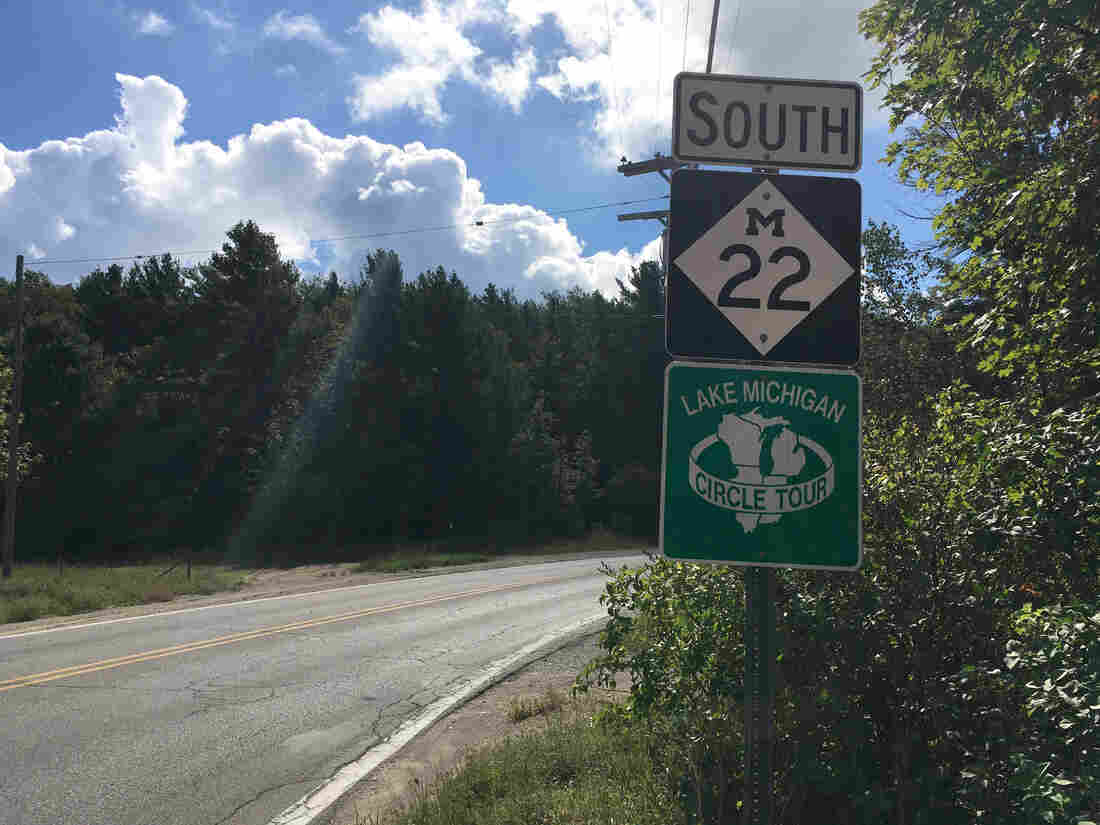 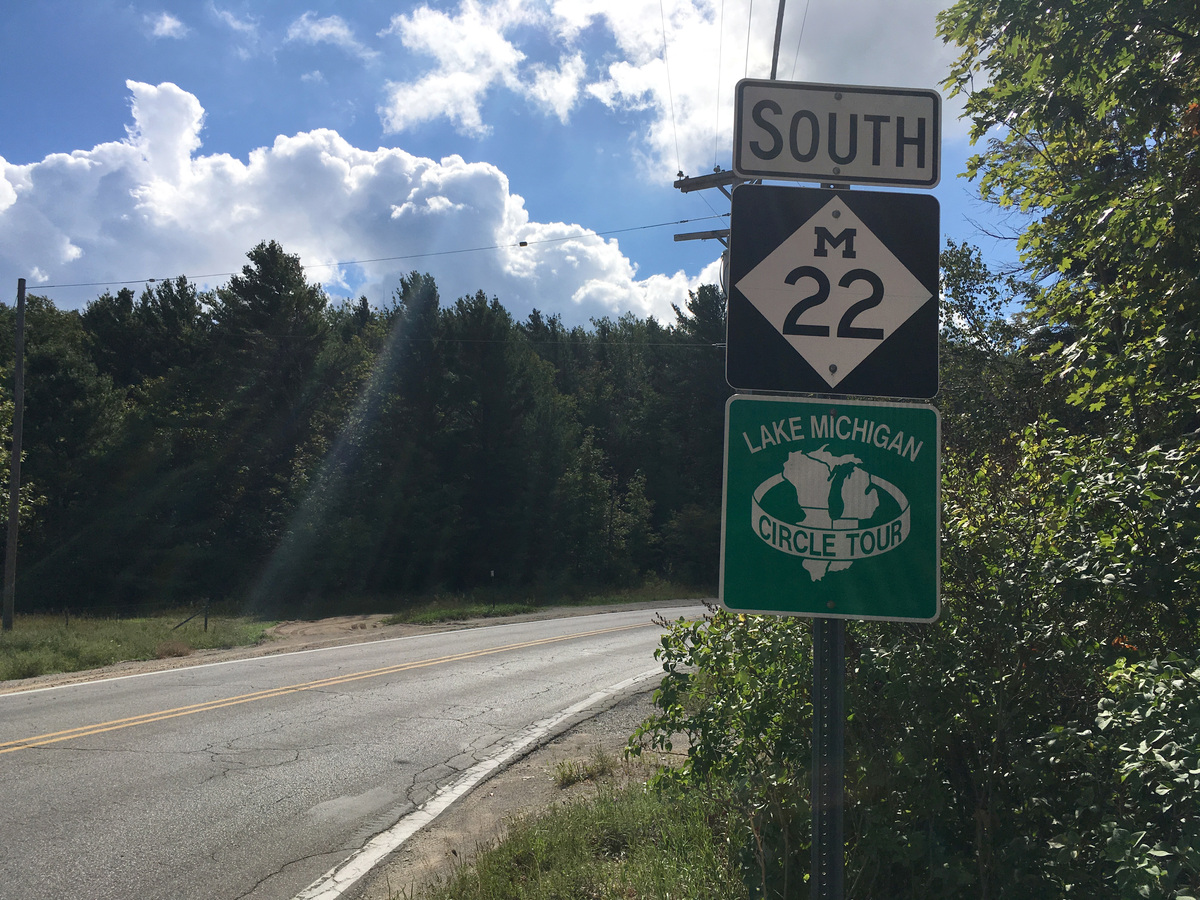 An M-22 sign marks the state highway in northern Michigan that's considered one of the nation's most scenic drives.

Myers is quick to point out the trademark does not mean he and his brother own the M-22 logo. "Anyone can do anything they want with it as long as it doesn't confuse our customers," Myers says.

He says that means a towing company, for example, or a party store, that want to use the M-22 brand would be fine because those don't compete with their retail business.

But the M22 company said the Good Hart General Store was competing with it. That store is located on another northern Michigan scenic route, M-119 , which is sometimes called the "Tunnel of Trees" and runs roughly 30 miles along Lake Michigan.

The M22 company said the general store's M-119 wine label was too much like its brand. Michigan Attorney General Bill Schuette then declared that state highway signs are in the public domain for anyone to use, and he filed a lawsuit challenging the M-22 trademark.

"M-22, the American flag, the U.S. Capitol — it's everybody's flag, everybody's Capitol, everybody's road. Nobody can stop others from taking their picture, putting it on a T-shirt, and trying to market it," Schuette says.

Mark Janis heads the Center for Intellectual Property Research at Indiana University's law school. "I don't know that there's anything exactly like this, but I think the state has a tough hill to climb here," he says. Janis says a highway sign doesn't really compare to the flag or the capitol, which under trademark law are considered "insignias" — official symbols of government authority.

"But there's at least a question, as far as I can tell, as to whether a road sign of this type would be deemed an official insignia of a state," he says. "I think that might be a little bit hard for the state to prove here."

In the meantime, the Michigan Department of Transportation has its own issues with the popularity of the M-22 highway signs. People keep stealing them, and they're expensive to replace.

Could The Battle Over 'Redskins' Change Trademark Law?

After Knitters Get In A Twist, USOC Apologizes For 'Cease And Desist' Letter