Accessibility links
Because Of The Electoral College, The Presidency Could Be Won With Just 23 Percent Of The Vote It can be done. How? Because of the Electoral College. In fact, through the years, the winner-take-all system the U.S. employs has skewed result after result. 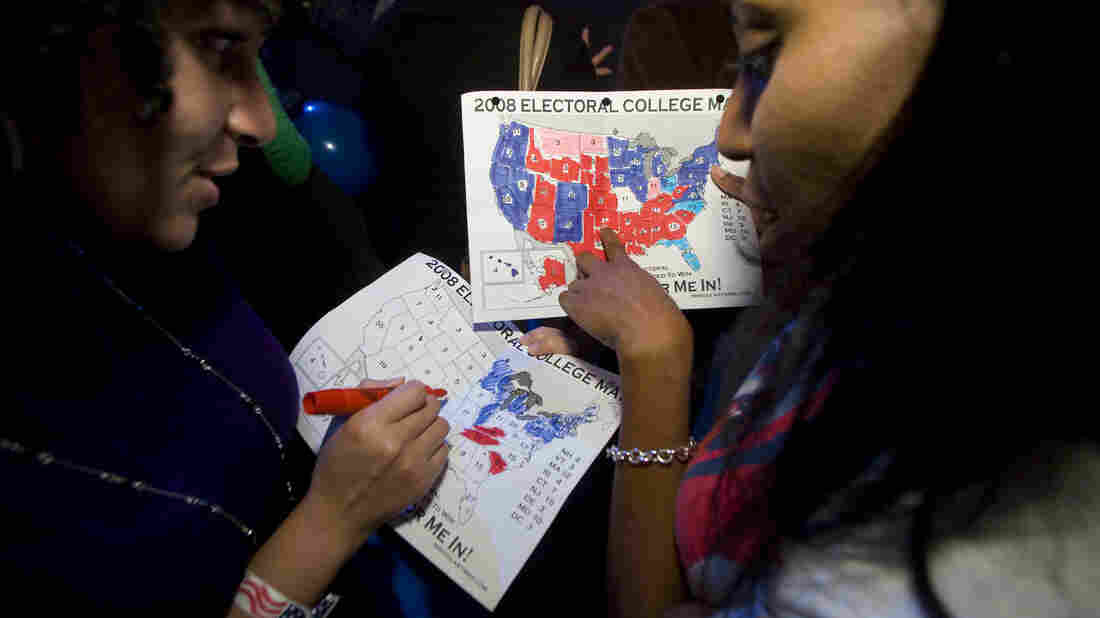 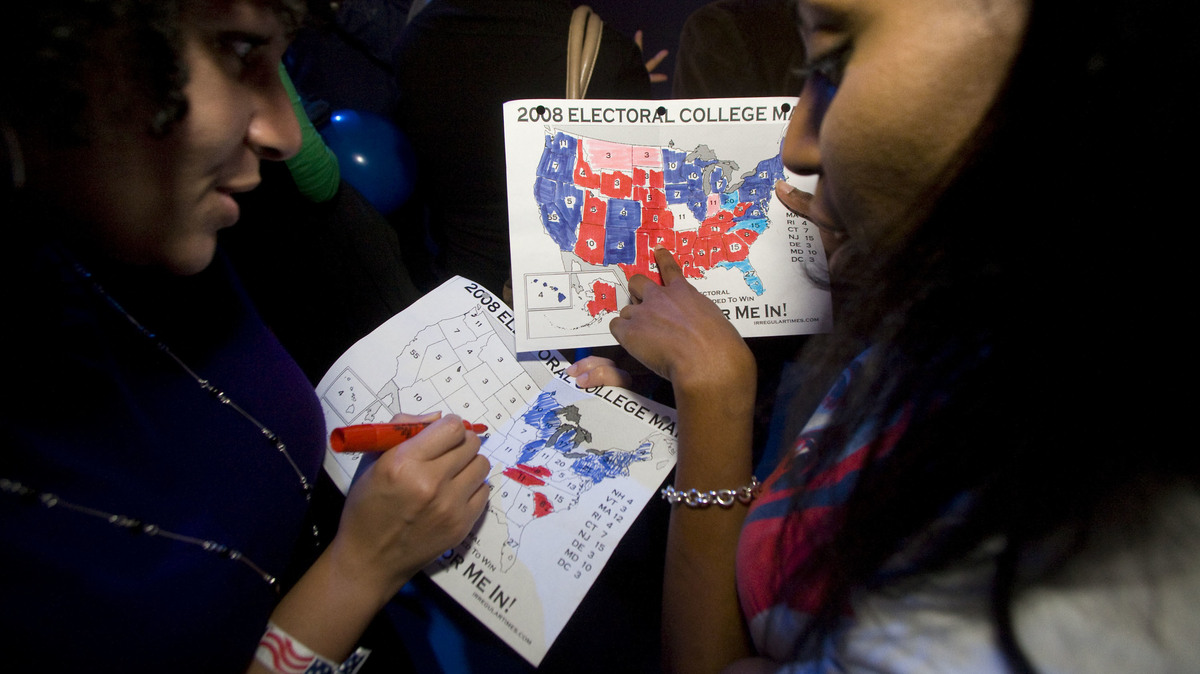 It's that time again: time for Americans to figure out how, exactly, their presidential election works. "Electoral College" searches spike every four years, just before Election Day, according to Google ... and the search volume is picking up right now.

So. Win a state by just one vote, and you win all of its electoral votes (unless you live in Nebraska or Maine, which divvy up their votes a little differently).

This can lead to off-kilter election results — in 2000, for example, Democrat Al Gore won the popular vote by a few hundred thousand votes, but lost the presidency by five electoral votes. So we wondered: Just how few votes would a candidate need to win 270 electoral votes?

We decided to find out. A candidate only needs to win the 11 states with the most electoral votes to hit 270. Assuming only two candidates (a big assumption; see below) and that one candidate won all of those states by just one vote, and then didn't win a single vote in any of the other states (or D.C.), how many votes would that candidate have to win? It depends on how you do the math. Either way, it's far less than half.

Initially when we did this story, we found that if you start with the biggest-electoral-vote states, the answer is 27 percent. However, we have an update: as Andrej Schoeke very nicely pointed out to us on Twitter, there's another way to do it (via CGP Grey) that requires even less of the popular vote: start with the smallest-electoral-vote states. Our math went through a few iterations on this but by our final math, in 2012 that could have meant winning the presidency with only around 23 percent of the popular vote.

The idea here is that a voter in a low-population state like Wyoming counts for a larger share of electoral votes than popular votes.

And if one were to start with the largest states, it would be 27 percent. Here's a look at that math:

We're making a lot of assumptions here — we're using vote totals from 2012, for one thing. Moreover, we're assuming there are only two candidates in the race.

And let's be clear about the obvious here: This kind of an extreme election isn't going to happen. And if it did — if there were somehow a bunch of 1- or 2-vote wins, you can bet the recounts would stretch into 2017.

A Week From Election Day, Democrats Have Many Paths To A Majority

And we're also sure that with any number of tweaks to the math (like plugging in a third or fourth candidate), you could come up with results that are slightly-to-moderately different. But that's not really the point here. The point is that the Electoral College can skew election results to a fantastic degree.

How a 7-point win becomes a "landslide"

Skewed wins like this happen regularly in U.S. elections — a modest popular vote margin can yield a ridiculously large Electoral College margin. For example, in 1984, Ronald Reagan beat Walter Mondale in the popular vote by 18 points — a sizable gap, but nothing like the Electoral College walloping: Reagan won 525 electoral votes, beating Mondale by 95 percentage points.

Here's what those gaps look like in every election going back to 1960's race, in which John F. Kennedy only squeaked past Richard Nixon in the popular vote by around 100,000 votes:

Ironically, the 2000 election — whose outcome struck many people as unfair because Gore won the popular vote but not the electoral vote — also has the electoral-vote margin that most closely reflects the popular-vote margin. In that sense, one could call it one of the "fairest" elections in modern politics.

Well, maybe. But then, come Nov. 9, there will be no difference for the losing candidate between getting 250 electoral votes or 150 — a loss is a loss.

The difference an Electoral College makes

The Electoral College and current demographics mean that both parties often take particular electoral votes for granted: Democrats regularly win California and New York, while Republicans win Texas and Georgia (however, things have been closer than usual in those states this year).

(Likewise, there are plenty of easy wins for each party at the low end of the spectrum. Wyoming is regularly Republican. Hawaii regularly votes Democratic.)

And that means that candidates regularly spend a disproportionate amount of time in high-electoral-vote battleground states like Florida and Ohio as they plot their "paths to 270." This means voters in Los Angeles or San Antonio (or Cheyenne or Honolulu) don't get that much attention.

If the Electoral College disappeared tomorrow, campaign strategy would probably shift dramatically; Democrats might campaign more in Austin, Texas. Republicans might do more outreach in conservative parts of California. Either way, the people of Ohio, Florida and Pennsylvania might get some respite from the onslaught of rallies and ads every four years, as candidates try harder to win bigger parts of the country.

*Before you fire off an email, yes, we know: You can still win the presidency without winning 270 electoral votes. If no candidate hits 270, then the House votes. But we're talking outright on election night.

This story initially reported 24 and 21 percent for the newer method of computing the popular vote that Andrej Schoeke sent us. The number we eventually landed on is 23.