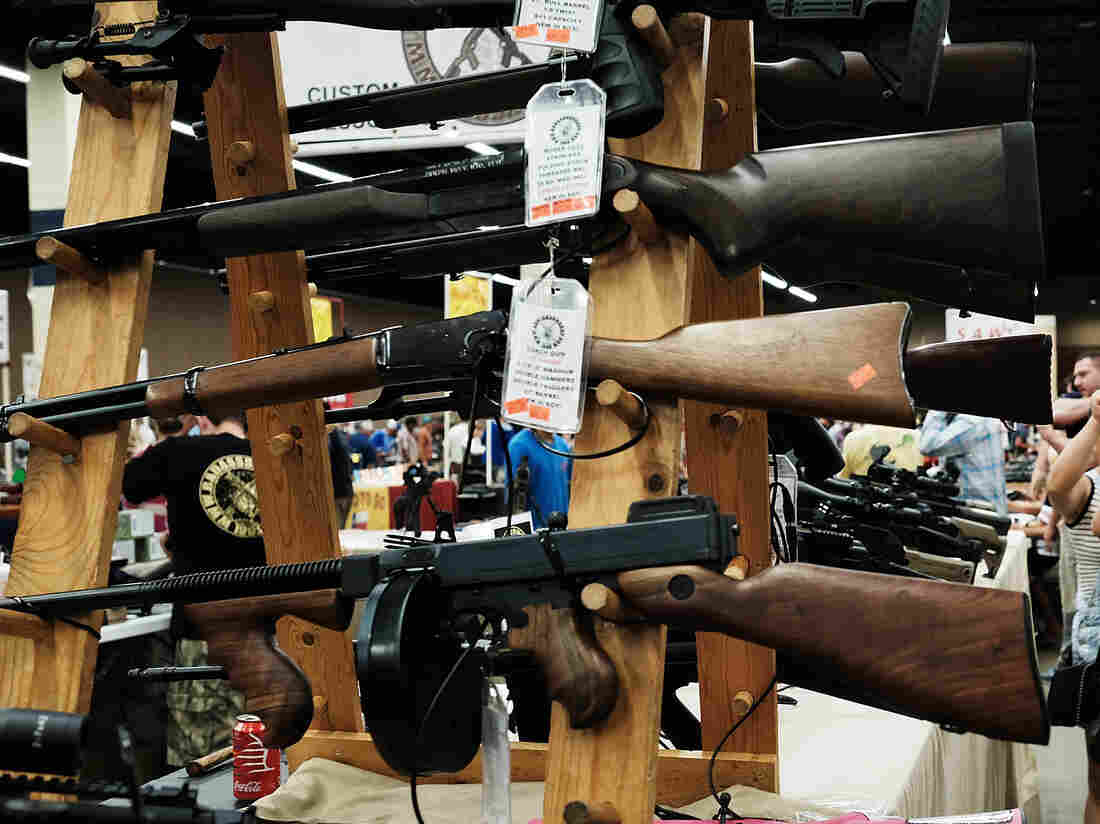 A new ballot measure in Washington will determine if courts can take away guns from people deemed to be dangerous to themselves or others. The initiative is well-funded and comes two years after the state passed a different initiative for background checks on gun sales, including those that are private. Spencer Platt/Getty Images hide caption 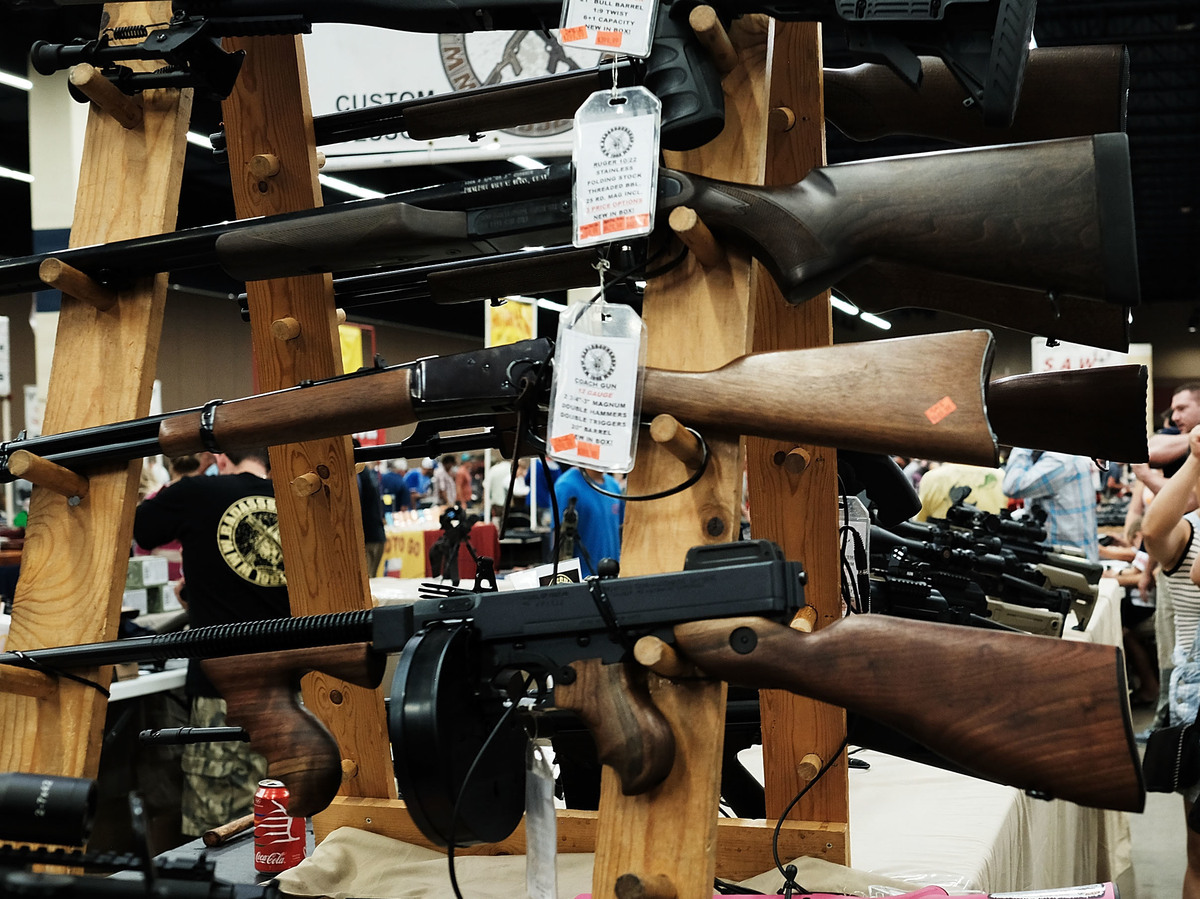 A new ballot measure in Washington will determine if courts can take away guns from people deemed to be dangerous to themselves or others. The initiative is well-funded and comes two years after the state passed a different initiative for background checks on gun sales, including those that are private.

Gun control has been a minor theme of this year's presidential election, as Hillary Clinton promises to close "loopholes" in the background checks for gun purchasers, and Donald Trump pledges "unwavering support" for the Second Amendment.

The real battle over guns, though, has been waged at the state level this year — with a new emphasis on ballot initiatives.

Washington is a prime example. Like many western states, it has a tradition of permissive gun laws; there's no minimum waiting period to buy a gun, and the state doesn't even require safety training for people who carry concealed firearms. In 2013, legislation to require criminal background checks for most gun sales died in the state House of Representatives. So in 2014, activists went around the legislature, putting background checks on the state ballot. It passed by a wide margin.

This year, similar background check laws are on the ballot in Nevada and Maine; in California, there's a ballot measure to require background checks for buyers of ammunition.

In Washington state, meanwhile, gun control activists are building on their success with another ballot initiative. This one gives courts the ability to take guns away from people deemed to be dangerous to themselves or others. It's very well-funded, both by local tech billionaires, as well as Everytown for Gun Safety, the national gun control group founded by Michael Bloomberg.

Together we can save lives and empower families to stop tragedies, like the one Marilyn experienced, before they happen. #YesOn1491 pic.twitter.com/DYaDbqmHgk

And it's a one-sided fight. There's been almost no organized opposition and no political spending by the NRA or other gun rights groups.

"People are probably sitting back and waiting to see if this passes and then if it does, you're going to see a lot of legal challenges," says Dave Workman, an activist journalist with the Second Amendment Foundation, based in Bellevue, Wash.

"That may be the strategy, to beat this thing in court, rather than try to fight what seems like a quote-unquote 'common-sense measure' at the ballot box," Workman says.

He also acknowledges a new reality for gun rights groups, as they face the power of groups like Everytown for Gun Safety.

"I think the gun control people have suddenly discovered that they've got a weapon. And that weapon is money," Workman says.

The gun rights groups have plenty of money, too. "Historically, gun rights groups have always outspent their opponents. But now the initiatives have sprung up," says J.T. Stepleton, a researcher with the National Institute on Money in State Politics. While the NRA has shifted its money into lobbying and independent expenditures for specific candidates, he says the gun control groups are putting more emphasis on ballot questions.

"Clearly, the advocates see this as a good change of venue for them," Stepleton says.

Pro-gun groups have put money into opposing the ballot initiatives in Maine, Nevada and California, but they're not keeping pace with gun control groups. That may be in part because of their strategic decision to spend heavily on behalf of Donald Trump.

The NRA still spends millions — but Stepleton says it's putting that money more into lobbying and independent expenditures for specific candidates. That leaves an opening for the gun control groups, as they focus on ballot initiatives.

"This is really taking a page from the marriage equality playbook," says Shannon Watts, founder of Moms Demand Action for Gun Sense in America, one of the groups under the Everytown for Gun Safety umbrella. She compares their strategy to the decision made by activists for same sex marriage, after they faced defeats in Congress in the 1990s.

"[They said,] 'We're going to pivot, and go to the states and companies, and we're going to get them to put laws and policies in place that point Congress and the Supreme Court in the direction that this nation is headed in,'" Watts says. "And that's exactly what we have done."

Cheryl Stumbo is a gun control activist in Washington, who survived the mass shooting at Seattle's Jewish Federation in 2006. She's been heavily involved in the ballot initiatives, and she frames the strategy as one of picking the right battles.

"What can we do that's going to save the most number of lives right now, and what can we win," she says. "So that we can keep going and create momentum."