Accessibility links
Review: Sad13, 'Slugger' Sadie Dupuis' new solo songs are brimming with taut hooks, layers of flittering keyboards and electronic beats that'll get everyone bobbing and moving on the dance floor instead of in the mosh pit. 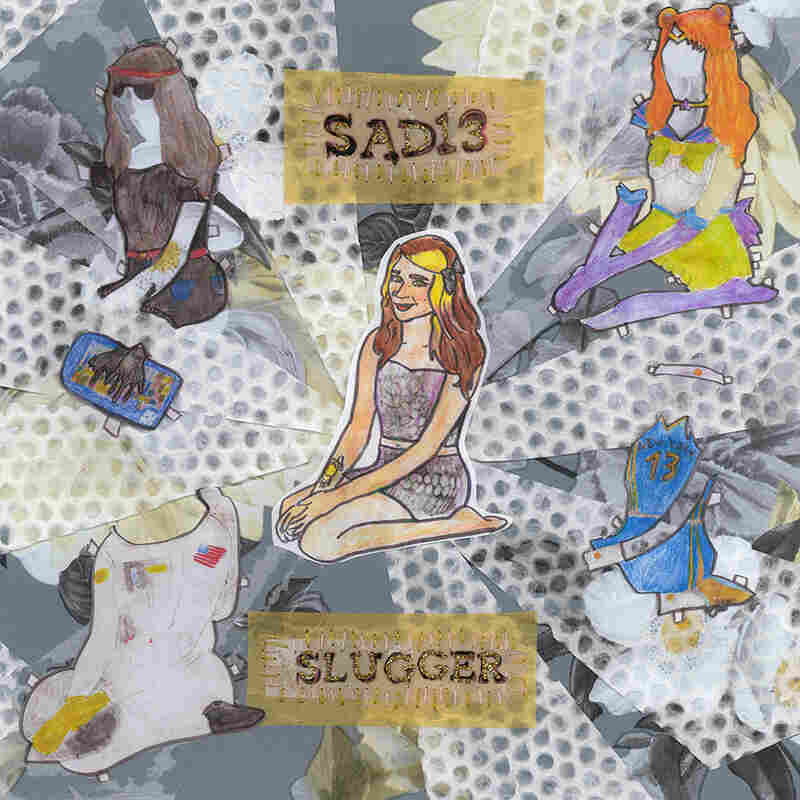 With Speedy Ortiz, Sadie Dupuis unleashes gnarled and dexterous guitar melodies that mimic and intersect with her distinctive, sing-songy vocal melodies; the band's noisy outbursts both bolster her furious word-slinging and belie the poetic honesty at the core of her songs. Dupuis started Speedy Ortiz as a solitary songwriting outlet, but as the band grew over the last few years, Dupuis started to miss the sanctuary and creative autonomy that bedroom recording once provided. Nursing a breakup, Dupuis sought a change of scenery away from her home in Northampton, Mass., and relocated to Philadelphia. Reinvigorated by the flourishing and inclusive music scene there, she got to work on something new.

The resulting album, Slugger — Dupuis' solo debut under the self-referential moniker Sad13 — represents a dramatic sea change. Written, recorded and self-produced in a two-week flurry, it sees Dupuis gravitating away from the grungy, guitar-based rockers she's best known for, and moving towards shimmering synth-pop and R&B (an aesthetic she first toyed with in "Puffer," one of the highlights on Speedy Ortiz's 2015 album, Foil Deer). Recalling contemporary hit-makers like Kelis, Britney Spears, Charli XCX and Santigold, Sad13's songs are brimming with the kinds of taut hooks, layers of flittering keyboards and electronic beats that'll get everyone bobbing and moving on the dance floor instead of in the mosh pit.

The transformation can be heard from the jump — in the chiming synths and staticky squalor in the standout opener, "<2"; the woozy, waltzing feel and blipping sequencers of "The Sting"; the feverish distortion in "Line Up"; the glitzy analog leads and buoyant drum-machine groove of "Just A Friend." Sad13 gets more sinister with "Fixina," which uses ominous, grinding textures to embody the seductive dependency of love even when it's bad for you: "A wonderland of narcotics / That's our love, if I'm being honest," she seethes, conjuring the brooding and gorgeous industrial pop of Garbage. Elsewhere, "Coming Into Powers" blurs rock with hip-hop in an anthem about championing marginalized voices: "F*** you, pay me what you owe / I sweat harder than those who got handed money cuz their birth was landed." Then, rapper and producer Sammus proudly shouts down any remaining doubters: "...Who says that you can't make dope art and go far? Blowhards with no bars."

Throughout Slugger, glossy production and catchy choruses are deployed as counterpoint for Sad13's empowering and self-actualizing feminist themes. On the highlight single, "Get A Yes," Dupuis flips the script on pop songs that often portray women as objects to be won by men, reemphasizing their agency and making mutual consent as alluring and sexy as it is important. "I say yes to the dress when I put it on / I say yes if I want you to take it off / I say yes for your touch when I need your touch / I say yes if I want to / If you want to, you've gotta get a yes," she sings in the chorus. It's an impactful, normalizing message for anyone, but — considering the prevalence of these issues in our current national discourse — it's especially resonant right now.

Elsewhere, Dupuis adds nuanced complexity as she addresses gender roles and platonic friendships ("Just A Friend"), and reflects on identity and balancing her internal and external selves as she denies others' ability to define her ("<2"). And both "Devil In U" and "Tell U What" recount being mistreated and devalued in relationships with people that assert their own demons and impossible expectations as a means of control and mental abuse. "You just throw me round like trash when I'm worth every dime you have / Tell you what: I'm not worth your violence," she says in "Tell U What."

Later, "Hype" explores those threads more broadly as a fierce indictment of how the efforts of women, people of color and non-binary artists are undercut by insidious, institutional misogyny in media, the music industry and online. Raw and unfiltered, she later turns a corner, singing "Claws protracted, but we're not scratching / We boost each other up... I just want to hype my best girls" — a nod to a burgeoning community of like-minded musical peers, and the safe spaces they've carved out for fans.

Sadie Dupuis has earned a reputation for her dynamic, literary lyrics and the way they regularly toggle between knotty linguistic wordplay ("If beauty is a terror, will the snow cover the evidence of love as something beautiful?") and knife-twisting one-liners that cut straight to the bone ("They let in every boy but I'm the only girl in sight."). Yet she writes with considered purpose: Regardless of whether she's ruminating over her vulnerabilities, revealing personal details of past toxic relationships or lifting people up with ferocious rallying cries, Dupuis doesn't mince her words. Even amid the fizzy pop embellishments that make Slugger so infectiously fun to listen to, Sad13 is thankfully as unapologetic and vital a voice as ever.