Accessibility links
Review: Bob Dylan, 'The 1966 Live Recordings' During the months he spent on the road in 1966, Dylan refined a way of inhabiting and transforming his own songs that was different from anything he'd done before. 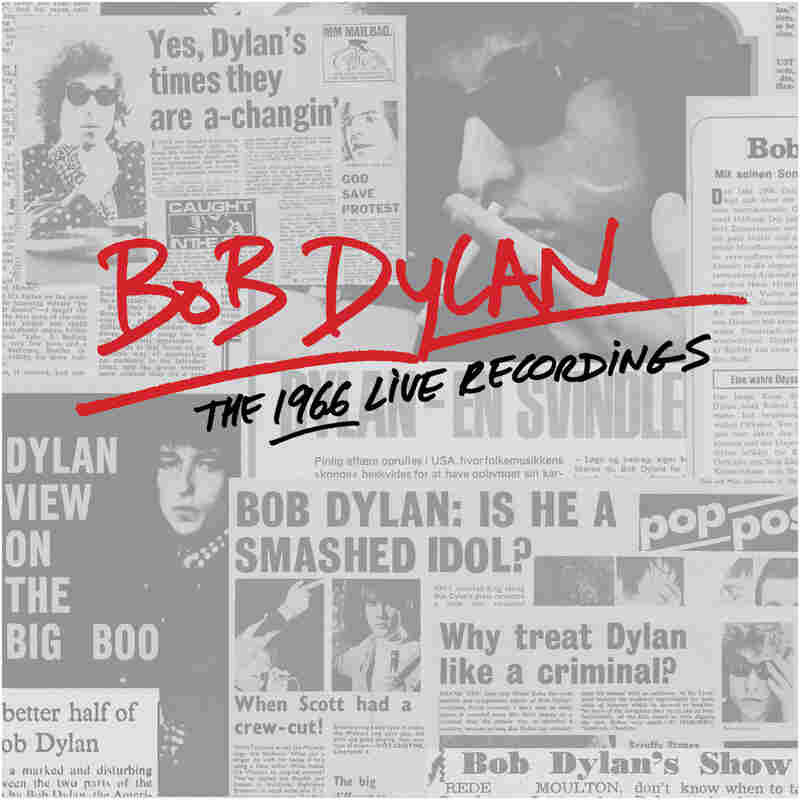 Before he began the tour that's documented on the 36-disc set The 1966 Live Recordings, Bob Dylan was on record as being ambivalent about the road.

His electric adventure had started months earlier, with a short, sonically flawed performance at the 1965 Newport Folk Festival. The move to electric guitar and a rock backing band brought praise from some quarters and howling derision and doubting criticism from others. By then, he was regularly hailed as an oracle, the voice of his generation — and that responsibility didn't sit well, either: Upon returning from a U.K. tour later in '65, he complained about the grind of touring, telling journalist Nat Hentoff he found it "very tiring having other people tell you how much they dig you if you yourself don't dig you."

It's unclear what, exactly, Dylan didn't dig about what he'd been doing — after all, this was the tour concurrent with Highway 61 Revisited. What is clear: During the months he spent on the road in 1966, he refined a highly individual approach to performance, a way of inhabiting (and then transforming) his songs that was different from anything he'd done before.

Dylan could be plenty compelling solo, in part because he kept the focus on the intricacies of his narratives and the graceful melodic details embedded within them. These aspects of Dylan's art, apparent from the very beginning of his career, were recently celebrated in the announcement of Dylan's Nobel Prize in Literature — his "new poetic expressions within the great American song tradition."

This box chronicles Dylan at the moment when he was expanding his own notion of what these expressions could be. It shows him stretching out and sometimes recalibrating tunes he'd written just months before. And at the same time, it shows another side of Dylan: the flowering of his confidence as a performer, bandleader and rocker. It's a deep dive into a pivotal moment in rock history, and though not all of the audio is pristine — some of the shows are audience tapes, others are soundboard recordings that may sound unbalanced to ears accustomed to digital perfection — the music is almost always thrilling, alive with the wide-eyed energy that accompanies high-wire acts and other explorations into the unknown.

The shows followed a standard format: an acoustic set, then an intermission followed by an electric set. Dylan worked from a thick songbook that included material from the just-completed Blonde On Blonde, the third landmark studio work to come from an 18-month fever burst of creativity. The acoustic sets mix older songs with pieces, like Blonde On Blonde's "Visions of Johanna," that had not yet become standards; Dylan varies the phrasing and emphasis of these newer, word-drunk gems, in search of subtle (and not-so subtle) ways to amplify their meanings. To hear him developing alternate pathways for his songs, working in real time to adjust shading and mood, check out the version of "Desolation Row" from Liverpool.

The full-band sets are more unhinged, notable for the contrast between Dylan's impulsive wildness and the low-key poise of the accompaniment. Backed by the Canadian band The Hawks (later The Band), Dylan charges right at those who wanted him to remain a folk singer. He shouts. He rips into some of his pretty melodies as though determined to destroy their contours — from one perspective, the tour registers as his long experiment in how far he can push tunes like "Ballad Of A Thin Man." He leans into some phrases until they become outrageously exaggerated, sings others with the leering, barely concealed delight of an antagonist.

There are many takeaways from a trove of this size. Among them are lessons about what it means to seek new ways to communicate at the exact moment the world is rhapsodizing about the ways that were so effective just weeks and months before. Sure, he was the Bard, in the midst of creating a string of landmark studio recordings that had a galvanic impact on the culture. That didn't stop Dylan, the Contrarian, from engaging in a thorough, exhaustive rethinking of his art — live, onstage, night after night.