Accessibility links
Review: Sleigh Bells, 'Jessica Rabbit' The duo's fourth album is a testament to the power of a celebration gone weird, with chopped-up and resequenced hooks working as the raw material for a scathing, fragmentary kind of pop. 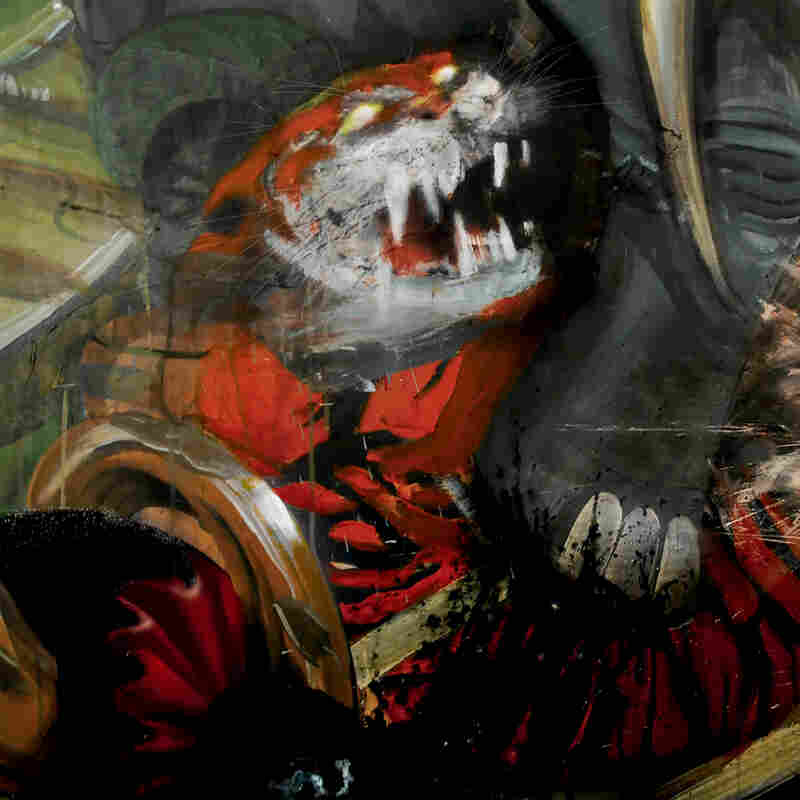 There's a point in every party where things start to come unglued. The hour is in doubt. Revelry dissolves into a disjointed blur. Altered states of consciousness have begun to fade, but the ground hasn't yet rushed up to break the fall. Jessica Rabbit is the sound of that limbo. The fourth album by the duo known as Sleigh Bells, it's a 14-song testament to the power of a celebration gone weird.

Where the duo's first three albums trafficked in huge beats, huge guitars and huge hooks, the new record takes these elements and chops them up. Then resequences them. Then uses that as the raw material for a scathing, fragmentary kind of pop. On "Throw Me Down The Stairs," singer Alexis Krauss stalks the perimeter of the song with a seething edge to her voice: "I'm kicking dirt, pulling down trees / One by one," she explodes, just as multi-instrumentalist Derek Miller slices and dices riffs and rhythms into a hash of haywire electronics. But it also dips abruptly into quiet, melodic passages of reprieve — a formula used throughout the album, most effectively on "Rule Number One," whose abrasive, industrial-glam stomp gives way to a lighter-waving anthem of a coda.

All those whiplash changes within each song take a while to get used to. But once you've caught on, it makes for a delirious rush. Jessica Rabbit is packed with jittery surprises, from the tender, pleading "I wanna listen to your heart" refrain at the start of "Baptism By Fire" to the cascading, ethereal minimalism of "Hyper Dark." A delicate tinkling of piano, along with some sharply drawn breaths, opens "Lightning Turns Sawdust Gold." From there, it morphs into a slow-rolling club track that owes to the influence of Mike Elizondo, who's worked with everyone from Dr. Dre to Eminem to Jay Z, and who co-wrote Jessica Rabbit tracks such as "I Can't Stand You Anymore" — a song that deftly, defiantly mixes squealing metal licks with blissful, downright beautiful R&B.

Jessica Rabbit may resemble a party coming apart at the seams, but it's still a party. "Crucible" is proof. Amid Miller's massive, clapping beats and stabs of synthesized orchestration, Krauss chants and boasts, "I cut my hair with a pocket knife" with fist-pumping glee. And with "Unlimited Dark Paths," Jessica Rabbit cranks up the scream-along velocity to 11. Then there's the inevitable comedown. "Torn Clean" appears early on the album, but it's a case of in medias res; it plops you down on the couch in a room reeking of empties and disappointment, soundtracking that scene with a hushed, atmospheric plea for release. Or at least another banger to push the vibe back into the red — something Sleigh Bells has no problem providing.

Pre-order the album on iTunes and Amazon.