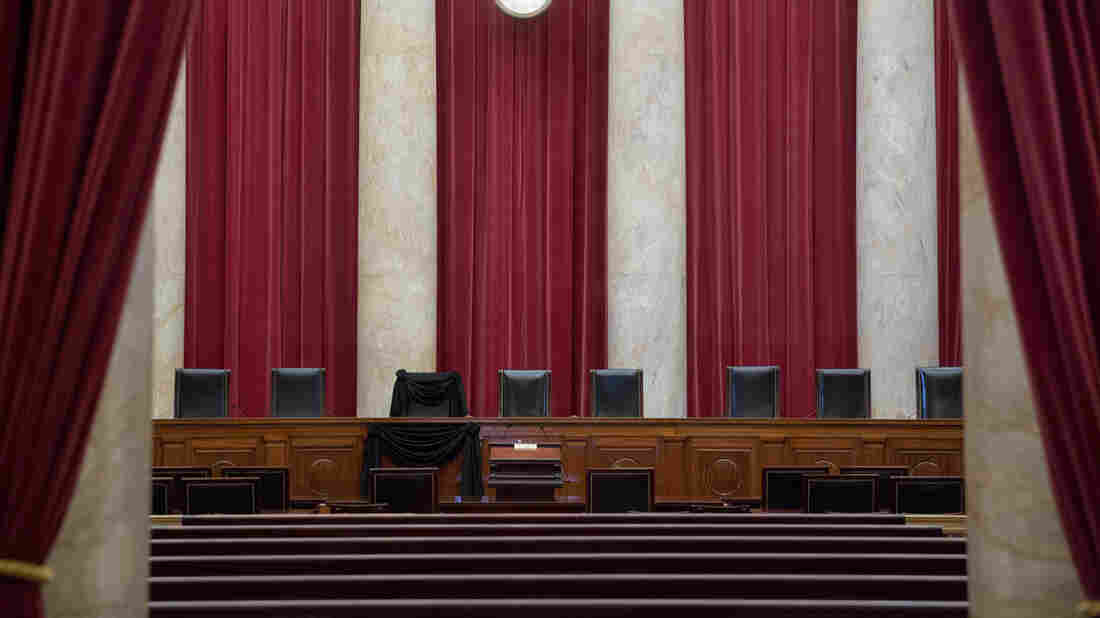 Eight out of nine chairs are seen at the Supreme Court, including one draped in black for Justice Antonin Scalia, who died in February. Bloomberg via Getty Images hide caption 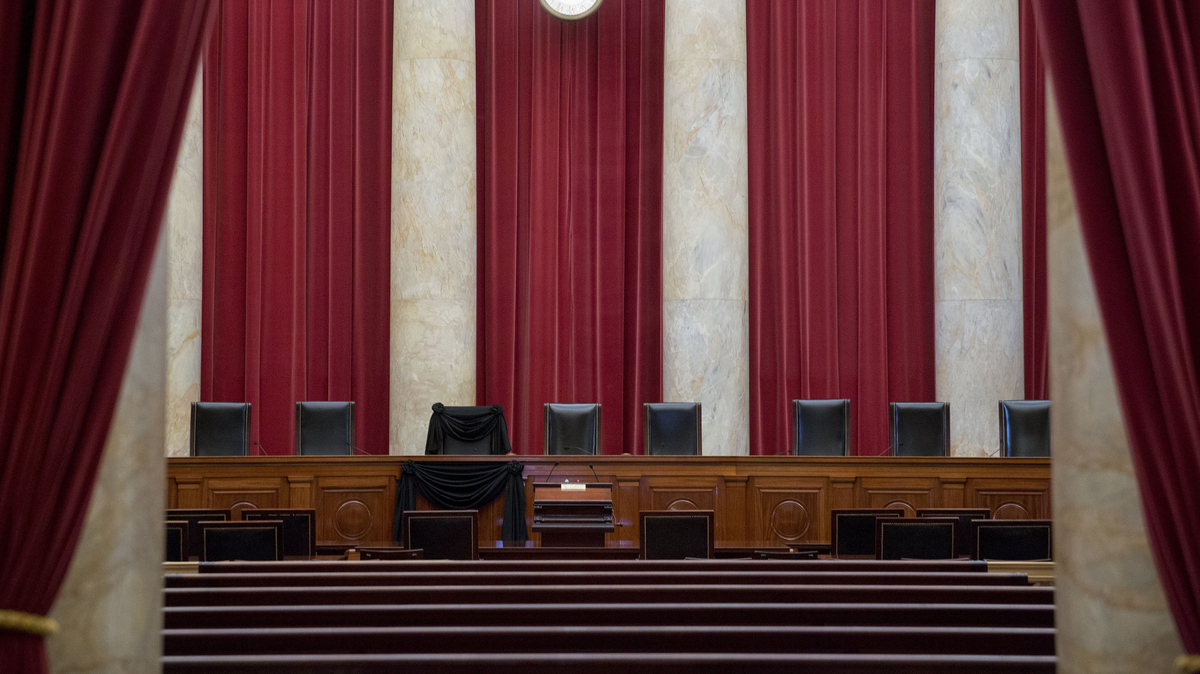 Eight out of nine chairs are seen at the Supreme Court, including one draped in black for Justice Antonin Scalia, who died in February.

With just days until the election, some Senate Republicans are suggesting that when it comes to the Supreme Court, eight is enough. Eight justices, that is.

For the first time, some Senate Republicans are saying that if Hillary Clinton is elected, the GOP should prevent anyone she nominates from being confirmed to fill the current court vacancy, or any future vacancy.

The pronouncements are such a break with history and tradition that they often provoke the response, "Really?" Some see such statements as little more than an attempt to motivate the Republican base to get out and vote. Others, however, see the trend as a further deterioration of American institutions of government.

Of course, a genuine and continued GOP blockade could backfire, too. It could make Republicans look like irresponsible, petty political obstructionists.

Senate Republican leader Mitch McConnell has not gone so far as to embrace a permanent blockade if Clinton is elected, but he set in motion the idea back in February.

The Case For Republicans To Consider Merrick Garland's Nomination

Hours after the death of Justice Antonin Scalia was announced, McConnell issued a statement declaring that Republicans, who currently control the Senate, would block action on any Obama nominee. McConnell said the American people should have a voice in the selection and that filling the slot would be left to the next president.

Weeks later, President Obama made what he conceded was something of a compromise choice. He nominated the man Republicans for years had been suggesting as an acceptable Democratic pick, Merrick Garland, the chief judge of the U.S. Court of Appeals for the District of Columbia. The olive branch didn't work.

While the GOP blockade drew strong disapproval in public opinion polls, the majority leader held his troops in line, and this summer Garland broke the record set by Justice Louis Brandeis a century ago for the longest wait by a nominee to the court. Brandeis waited 125 days from nomination to confirmation, with much of the opposition based on his Jewish religion. Garland is at 232 days and counting.

Now some Republicans are suggesting the wait for Scalia's replacement could last much longer, perhaps an entire presidential term, or two. Three Republican senators have said directly that they would consider leaving Scalia's seat empty as long as Clinton is in office.

Sen. John McCain was the first. Appearing on a conservative radio talk show, he said that if Clinton is elected, "I promise you that we will be united against any Supreme Court nominee [that] she would put up." His press secretary quickly tried to backpedal, but McCain himself has not.

Since then, Sens. Ted Cruz and Richard Burr have upped the ante, while other Republican senators have dodged and weaved on the question. The Senate's No. 2 Republican, Texas Sen. John Cornyn, said he didn't want to "speculate" on the question.

But Burr, in a tough re-election battle in North Carolina, said in a tape-recorded meeting with Republican volunteers last weekend, "If Hillary becomes president, I am going to do everything I can do to make sure four years from now, we still got an opening on the Supreme Court."

As for Cruz, he suggested there is nothing sacrosanct about having nine justices. For support, he pointed to a statement made by Justice Stephen Breyer during an interview in which Breyer noted that the court has historically functioned with as few as five or six justices.

Breyer's friends say the justice was mortified to see his historical observation used for political purposes, though he has not commented publicly on Cruz's statement.

It is true that the number of justices fluctuated in the early days of the republic. But the country has lived with a nine-justice court since that number was established by law almost 150 years ago; indeed, when President Franklin Roosevelt tried to expand the number with his infamous court-packing plan, he suffered a major political defeat that had repercussions throughout his presidency.

The Supreme Court's fate will turn on the result of the upcoming general election. If Donald Trump wins the presidency, these "what ifs" are likely moot, unless the Democrats win control of the Senate and decide to adopt the GOP tactics.

If Clinton wins and the Democrats take control of the Senate, they most likely would change the filibuster rule, as they did for lower court judges earlier in 2013, and then any nominee could be confirmed by a simple majority vote, not the 60 votes required to break a filibuster.

But if Clinton wins, and Republicans still control the Senate, the battle will continue, with unclear results, even if she renominates Garland.

Some Republicans, like Judiciary Committee Chairman Charles Grassley, have conceded that they "cannot stonewall forever." But Republicans in Senate races, like Pennsylvania's Pat Toomey and Nevada's Joe Heck, have been using the Supreme Court to court conservative voters.

The technique used by a number of prominent Republican senators has been to say they would be willing to consider a Clinton nominee, but not really.

Florida's Marco Rubio said he opposed a blockade in principle, but then said he thought it unlikely that Clinton would nominate anyone who shared his view of the court sufficiently for him to vote to confirm.

That thought was echoed by Sen. Rand Paul of Kentucky. "I can't imagine voting for a Clinton nominee unless she would appoint somebody that actually ... believes in the separation of powers as the Founders wrote into the Constitution, " he said.

For now, the Supreme Court fight centers on a court of eight that on some major issues has been divided 4-4, a tie that leaves often conflicting lower court decisions in place.

But the current vacancy may not be the only one. Retirement, health problems — or death — might well claim any of the court's older justices.

Several justices, including Justices Ginsburg, Elena Kagan and Sonia Sotomayor, all Democratic appointees, have made remarks suggesting that the longer the court remains short of nine justices, the more problematic it will be to resolve legal questions nationally.

Justice Clarence Thomas, the court's most conservative justice, said in an interview at the conservative Heritage Foundation last week, "This city is broken in some ways. ... We have decided that rather than confront the disagreements and the differences of opinion, we'll simply annihilate the person who disagrees with us." He expressed concern that "we're undermining our institutions, and the day is going to come when we need the institutions and the integrity of the institutions."