Accessibility links
The Gender Gap In This Election Could Be The Biggest In At Least 60 Years Women prefer Clinton by about the same amount that men prefer Trump, and it could lead to the widest gulf between the sexes since at least the 1950s. 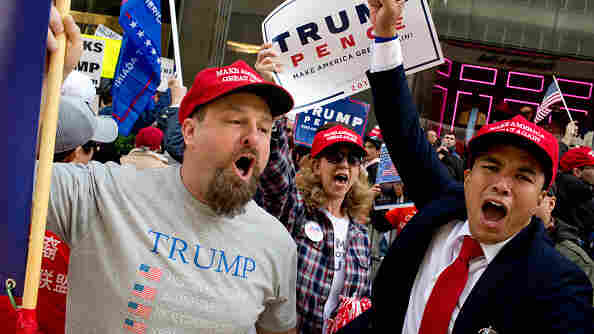 Men (especially white men) have remained enthusiastic about Donald Trump this election, and the gap between their preferences and women's could be the largest it has been since at least the 1950s. Andrew Lichtenstein/Corbis via Getty Images hide caption 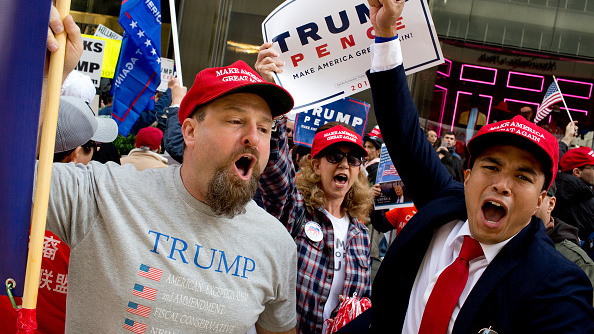 Men (especially white men) have remained enthusiastic about Donald Trump this election, and the gap between their preferences and women's could be the largest it has been since at least the 1950s.

Women have voted far more heavily Democratic than men in presidential elections since 1996, and the biggest gap thus far has been in 2000, when women preferred Al Gore over George W. Bush by 10 points, while men chose Bush over Gore by 11 points — a 21-point total gap. This year's gender gap could be even wider, if recent polls are any guide.

It may seem logical — or at least fitting — that this kind of gap is occurring in the first election in which a woman is a major-party presidential candidate. But it's not necessarily that women are flocking to Clinton; that may play into some women's votes, but research has shown party ID to have a much stronger pull than demographic factors. Indeed, Clinton may not even win women by as large of a margin as her husband did in 1996.

One other factor at work in this gender gap is not so much Clinton pulling women into her camp as Trump pushing them out of his. Even reliably conservative voters like white evangelical women find themselves repulsed by his overt sexism and comments about assaulting women. Meanwhile, Trump has made his campaign overtly masculine, which may help explain some of the hold he has on men.

Sexism Is Out In The Open In The 2016 Campaign. That May Have Been Inevitable

Neither women nor men are a voting bloc, of course; all sorts of fissures criss-cross either gender (single women vote more Democratic than married women, for example, and white-collar white men are less Republican than blue-collar white men). But one area in which 2016 could be unusual is among white women.

The only time in recent election history that white women swung Democratic was in 1996. This year, polls suggest white women could swing Democratic for the first time in 20 years, though they right now are leaning slightly Republican. Meanwhile, white men are remaining about as Republican as they ever have been.

As whites make up somewhere near three-quarters of the electorate, their choices will help drive that broader gender gap in the first chart, above. However, it's looking more doubtful that the white gender gap will be as historic as the one seen nationwide, across all races.