Accessibility links
'Float' Will Lift Your Mind Out Of Its Rut Anne Carson's unconventional collection of 22 chapbooks can be read in any order, and covers everything from Helen of Troy to H.G. Wells — but mostly, it's about women taking back their own stories.

'Float' Will Lift Your Mind Out Of Its Rut

'Float' Will Lift Your Mind Out Of Its Rut 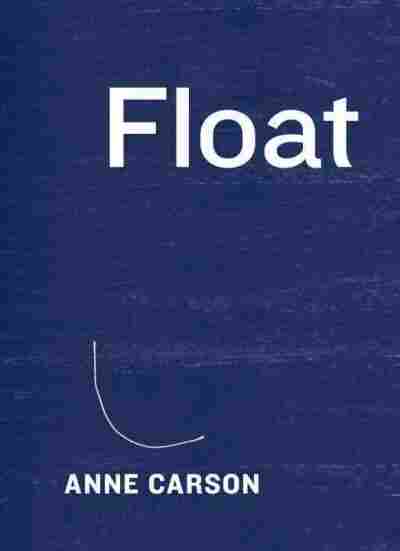 A Collection of Twenty-two Chapbooks Whose Order Is Unfixed and Whose Topics Are Various: Reading Can Be Freefall

Title
Float
Subtitle
A Collection of Twenty-two Chapbooks Whose Order Is Unfixed and Whose Topics Are Various: Reading Can Be Freefall
Author
Anne Carson

If you think the same thoughts enough times, they make paths, like water does, create deepening grooves, until habituated expressions and permitted thoughts become a canyon you can't get out of. There are many books I love, but Anne Carson's make me reconsider my life. Her poems feel like anarchic rainfall, a fresh shower, an escape from the canyon.

Float is 22 chapbooks in no particular order, poems, plays, essays, translations, thoughts on Homer, on time, on death, on Bridgitte Bardot's "transcendent ass," but overall about language, and the way words can turn transparent or take flight or turn into something alien and startling.

"I am interested in people who cut through things," she writes in one. This collection is many things, but one of them is a study of people (especially women) who cut through language.

In a chapbook called "Variations on the Right to Remain Silent," Carson writes about "catastrophizing." That is, a kind of refusal to play nice with words, to translate yourself into comprehensible grammar. For example, the judges demanded that Joan of Arc, on trial, explain herself and the voices she heard. "They wanted her to name, embody, and describe them in ways they could understand, with recognizable religious imagery and emotions, in a conventional narrative that would be susceptible to conventional disproof." She won't. She can't. Instead she says: "Light your fires!"

There are many books I love, but Anne Carson's make me reconsider my life. Her poems feel like anarchic rainfall, a fresh shower, an escape from the canyon.

The urge to catastrophize, or to make "free marks" (the act throwing paint onto a page) as she sometimes calls it, lives in Eve, too. "Eve changes human history by putting a free mark on Adam's apple. Why does she do this?... [M]aybe she was catastrophizing. Adam had just performed the primordial act of naming, had taken the first step toward imposing on the wide-open pointless meaningless directionless dementia of the real a set of clichés that no one would ever dislodge or want to dislodge — they are our human history, our edifice of thought, our answer to chaos. Eve's instinct was to bite this answer in half."

A similar, scaled-down gesture is described in a different chapbook, one containing her wonderful poem "Pronoun Envy." It begins:

of the Harvard Linguistics Department

of the female students

These women wanted know why God was "He," and why humans were "mankind." They begin to get restless. "They begin bringing / kazoos to their lectures to drown out certain pronouns / and masculine generics" to "[scrub] away the air." They are minor Joans of Arc, refusing to speak a language that isn't theirs.

The chapbook that has grown most battered in the course of my time with Float, the one that I've read dozens of times now, is called "Candor." In it, Carson describes Jane Wells, the wife of H.G. Wells. Wells was a "sexual socialist, [and] liked his women to acquiesce in one another." Jane had to be friendly to his other women, have them to tea, write them letters. In Carson's imagining, she holds a letter of saccharine sympathy from one of these other women ("How ill you have been ... how sorry I was ... how glad I am ..." the woman wrote). But Jane "took out her pencil and added the few faint underlinings and exclamation marks that make it a document of a different kind." Carson writes, "there were considerations of privacy and accuracy that moved her hand to perfect it in a certain way, to have her mood recorded, to whisper on paper some resistance to the falsity of the other woman's sentences." She marks it.

Next, Carson considers Helen. "Oh, she was a package. She had all the men of Greece in love with her, fled to Troy, charmed everyone there too. It was partly her beauty, partly her accurate private mind. Homer doesn't bother describing her beauty but he gives us a close-up of her mind ...." There, in the Iliad, he shows her weaving a tableau of the battle, a portrait of the men fighting over her. "Helen's weaving is special — double and red and weirdly now." She tells her own story, inside Homer's story. "She is not just another object taken up and used by a man for the sake of his art, she glances out."

Throughout Float are these gestures of power and of rage: taking back the story, or, failing that, ruining it. Biting the apple, lighting the fire, marking the letter, blowing the kazoo. "If you are not the free person you want to be, you must find a place to tell the truth about that," Carson writes at one point. She herself has written something wild and weird and luminous. She writes how you might write if you were not constrained, not afraid of being misunderstood. We can't be free all the time, but Carson provides the hint of a door — or, failing that, a match.