Accessibility links
View From Nearly 99: Frances Kolarek Reflects On Politics And Change The former newspaper reporter was born in 1917, before women won the right to vote. She calls Hillary Clinton the most qualified presidential candidate she has seen in her lifetime. 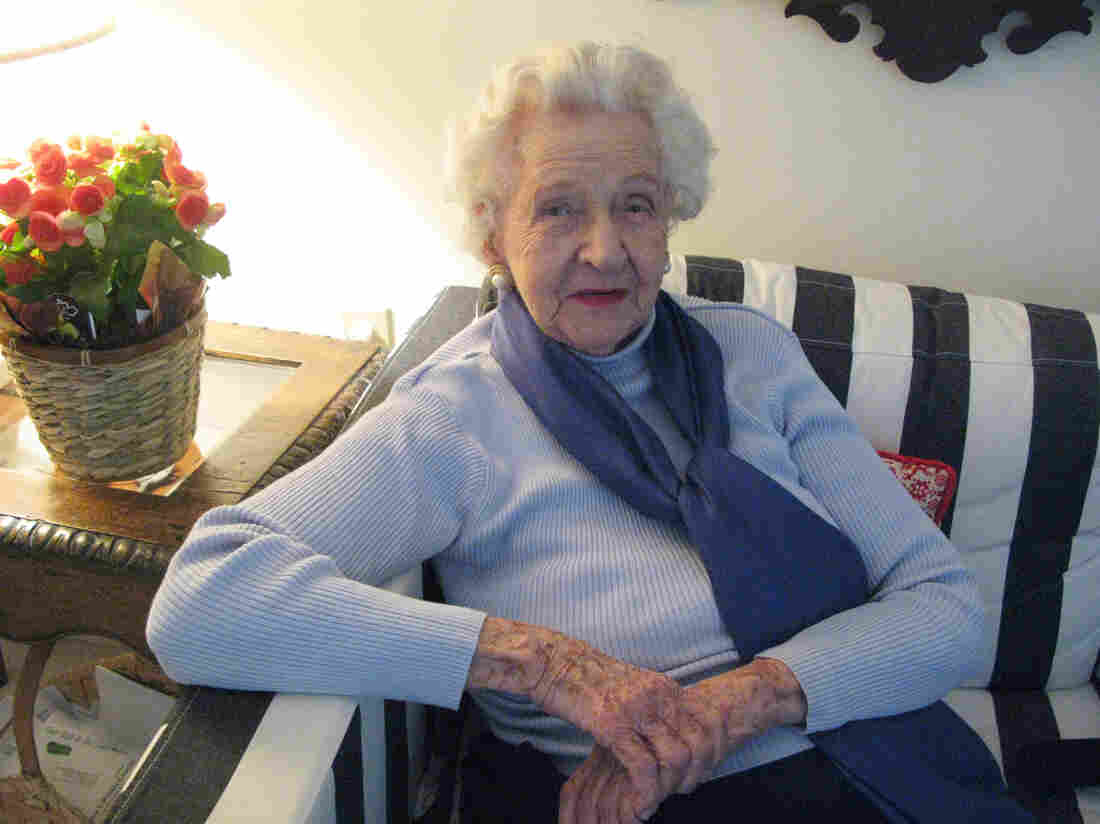 Frances Kolarek turns 99 next week. She was born three years before women won the right to vote. This election she cast her ballot for Hillary Clinton. Melissa Block/NPR hide caption 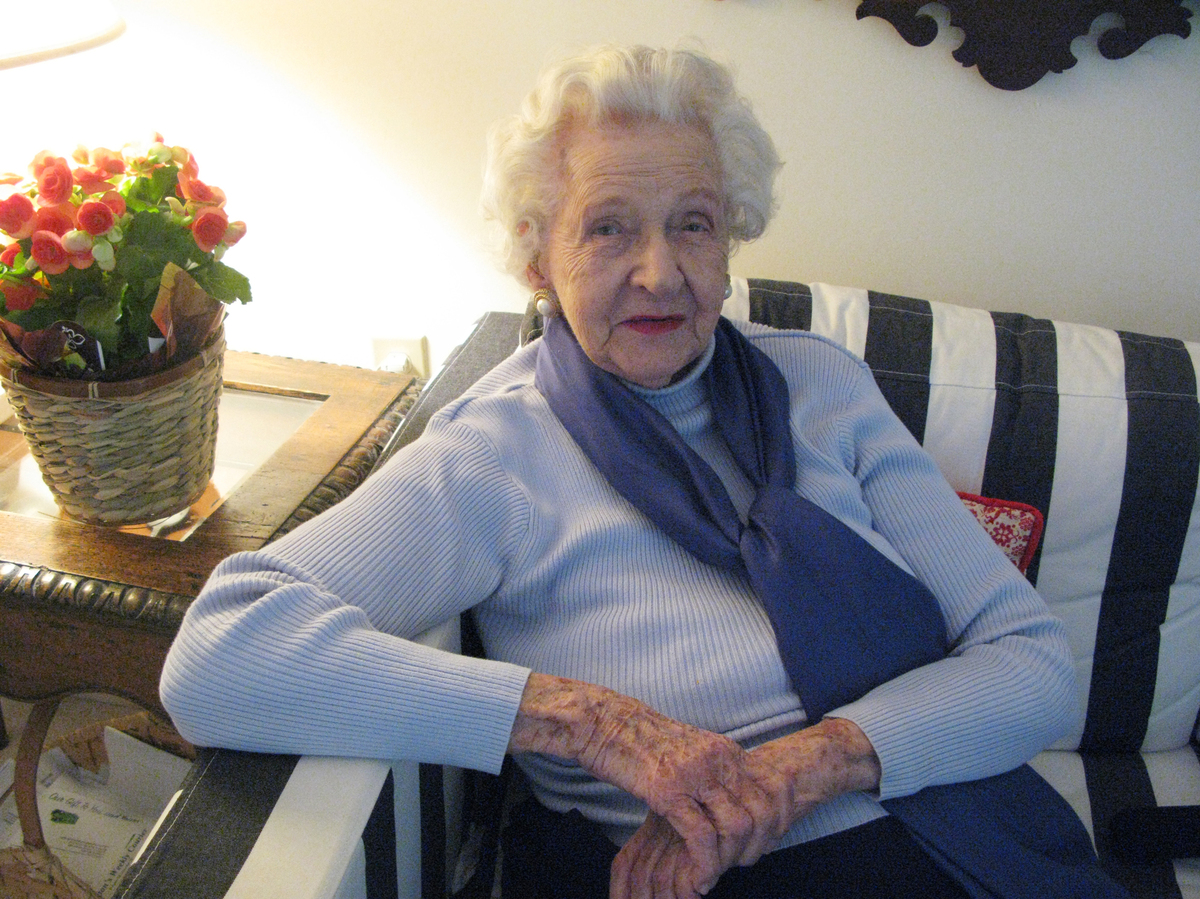 Frances Kolarek turns 99 next week. She was born three years before women won the right to vote. This election she cast her ballot for Hillary Clinton.

A week away from turning 99 years old, Frances Kolarek has a long view of life and presidential elections.

Born in 1917, three years before women won the right to vote, she cast her first presidential vote for Franklin Delano Roosevelt. Now, in 2016, she has cast her vote early for Hillary Clinton.

"I think she is undoubtedly the most qualified candidate for the presidency that we have seen in my lifetime," she says from her home at the retirement community where she lives, independently, outside Washington, D.C.

Born Before Women Could Vote, Now They're Proud To Vote For Clinton

Kolarek has bright blue eyes, an easy laugh, and a passion for words, especially The New York Times crossword.

"That's the first thing I do. I cut the crossword puzzle out, put it on a clipboard and go to work. Sometimes I've already done half of it before I have a sip of coffee," she says with a chuckle.

She wrote a regular column for the retirement community's blog until this summer, when she decided it was time to stop.

"I was just running out of steam," she admits. "I wrote the guy I was sending it to and said I thought at 99 it was time for me to retire. And he said he thought I was entitled to it, too. He agreed."

Born during World War I, Frances Kolarek grew up in Washington, D.C.

She graduated from high school at 16 and went straight to work as a secretary for MetLife Insurance Co. for $11 a week, she recalls.

"About tickled to death to get it," she says.

It was the bleakest point of the Great Depression. She contributed that "pittance," as she puts it, to her parents, to help with household expenses in those tough times.

While she was working, she also started taking college classes at night at George Washington University. She chose to study chemistry, she explains, "because it was hard, and I was having trouble with it in high school, and I wasn't gonna let it get me down." She was one of just two women in the program.

But Kolarek always harbored a desire to write, so when she saw an ad for a secretarial job at the Washington Times-Herald, she thought, "I'm gonna take that job. It's in a newspaper office, and we'll see what happens."

By then, it was World War II. A lot of the reporters were gone, serving in the war, and Kolarek got a break.

"The phones were ringing at the city desk one day and I went out and answered them," she says.

A man was calling in with a story idea: He described using his horse and buggy to get around the deprivations of wartime gas rationing.

Kolarek wrote a story based on what he told her.

"And the city editor said, 'I didn't know you could write! Why didn't you tell me?' " she recalls.

A reporting career was born. She loved her job and loved the newspaper, which was a mostly male preserve.

"It was an extremely profane, raunchy atmosphere. And I thoroughly enjoyed it!" she says. "I just liked the way it smelled and tasted. And I learned how to fit in."

At the Times-Herald, she met Joseph Kolarek, the man who would become her husband.

She went on to work for Time magazine in New York as a reporter-researcher, and then as a stringer in Prague, when her husband was posted overseas with the Foreign Service right after the war.

They'd move on to postings in Belgrade, Guinea and Bonn, and they had a daughter, Mary.

"I never stopped to think about what I couldn't do," Kolarek says. "It never occurred to me. Anything I had wanted to do, I had managed to achieve."

Kolarek's views of democracy have been shaped by the years she spent living behind the Iron Curtain, and during the repressive regime of Guinea's founding father, Ahmed Sekou Toure.

"I am a passionate American. I will not let anybody say anything against this country. It's my country, right or wrong, always, and always will be," she says firmly. "I think we fail to appreciate how fortunate we are to live here in this democracy because we haven't seen how other people live, with newspapers restricted, with their ability to cast a vote restricted. Freedom isn't free! That's the bottom line."

Now, reflecting on all she's seen in her near century of life, Kolarek says her vote for Hillary Clinton feels meaningful.

"I would like very, very much to see Hillary succeed," she says. "I had misgivings about her running now. I just wondered if the country was ready to accept a woman as president. And I think I was wrong. I think we are."

Kolarek will absolutely be watching as the election results come in on Tuesday night.

She'll stay up as late as necessary ... if she can.