Accessibility links
'Fish In Exile' Is A Chronicle Of Grief Barely Survived In Vi Khi Nao's new novel, a husband and wife are falling apart after losing their two children in a terrible accident. Nao's poetic chops are on full display in this immersive, difficult book. 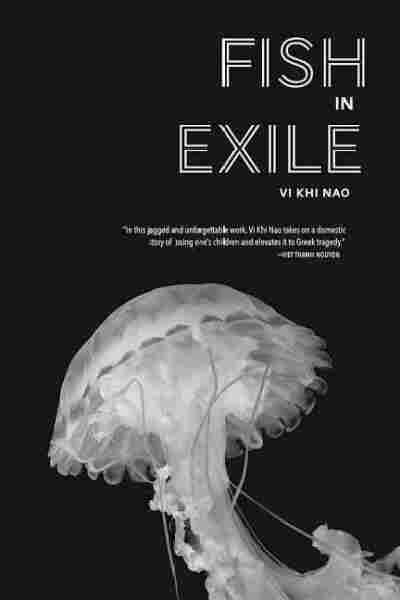 Before the opening of Vi Khi Nao's Fish in Exile, a married couple, Ethos and Catholic, lose their twin children in a terrible accident at the seashore. By the time the reader opens to the first page, they — and the book itself — have been fragmented by the event, and are trying and failing to hold themselves together.

True to her name, Catholic embraces everything. She copes with action: going to work, having her tubes tied to prevent future pregnancies. Even her affair with the neighbor, Callisto, has an air of industry; she is doing what she must do to survive. Ethos, on the other hand, is pure mood, obscure, melancholy and mercurial. He pedals his feet uselessly in the slickness of grief, eats strange meals at odd intervals, carries around a deflated haversack, tosses letters into the ocean. He has exiled himself from his job, his marriage, his entire life.

Together, and separately, the couple wades through a gelatinous fog of grief. They attempt to have sex, fight, look past each other. They purchase, make tiny outfits for, "walk," and accidentally kill a rotating procession of tropical fish, stand-ins for the children whose bodies have never been located. "They're fish," Catholic tells her husband as she attempts to get a dress on one of them. "Their natural impulse is to slip away." For Ethos and Catholic, the gods and the ocean are one and the same — impersonal, capricious, unknowable. "The sea is Ethos' cemetery," Catholic says. "It's mine too. This burial ground will eat anything you feed it, even flowers. I toss in a bouquet of morning glories, daisies, hyacinths, and roses. Gone. It eats them all. Pulverizing them under heavy blankets of breath."

As with so many of my favorite novels, 'Fish in Exile' is less about plot (though there is one, loosely speaking) and more about its immersive experience.

That Nao is a poet is on full display — the prose here is expressive, muscular, and strange; almost exasperatingly precise. The story manifests as verse, blocks of text, scripted dialogue, loaded metaphor, storytelling. Mythology of every type — Roman, Greek, Christian — is used as a lens to process their suffering, and as a tool for healing. (Ethos's mother tells him, "You know, the classics saved me. They are the most ancient form of psychotherapy.")

This journey across the boundaries of form and genre, to write about what is un-write-aboutable, is a smart maneuver — it permits the reader to experience what has been written about over and over in a way that is fresh and absorbing in its difference. It is not dissimilar from the techniques adopted by Max Porter in Grief Is the Thing with Feathers and Matt Bell in In the House Upon the Dirt Between the Lake and the Woods, which use surreal, myth-tinged narratives to attack similarly loaded topics — the loss of a spouse and miscarriage, respectively.

As with so many of my favorite novels, Fish in Exile is less about plot (though there is one, loosely speaking) and more about its immersive experience. It asks a lot from the reader, but rightfully so. Yes, you must pursue meaning through chaos, wring beauty from brutality, grasp for solace among the slow-motion turmoil, but then again, isn't that also how you survive grief?

Carmen Maria Machado's debut short story collection, Her Body and Other Parties, will be released in 2017. She has written for The New Yorker, The Paris Review, Granta and elsewhere