Accessibility links
Transcript: Donald Trump Speaks At Victory Rally Donald Trump addressed his supporters at a victory rally in Manhattan after the Associated Press declared him the winner of the presidential election.

I've just received a call from Secretary Clinton. She congratulated us — it's about us — on our victory. And I congratulated her and her family on a very, very hard-fought campaign. She fought very hard.

Hillary has worked very long and very hard over a long period of time and we owe her a major debt of gratitude for her service to our country. I mean that very sincerely.

Now it's time for America to bind the wounds of division. We have to get together. To all Republicans and Democrats and Independents across this nation, I say it is time for us to come together as one united people. It's time.

I pledge to every citizen of our land that I will be president for all Americans. And this is so important to me.

For those who have chosen not to support me in the past, of which there were a few people, I'm reaching out to you for your guidance and your help so we can work together and unify our great country.

As I've said from the beginning, ours was not a campaign but rather an incredible and great movement, made up of millions of hardworking men and women who love their country and want a better, brighter future for themselves and for their family.

It's a movement comprised of Americans of all races, religions, backgrounds and beliefs, who want and expect our government to serve the people. And serve the people, it will.

Working together, we will begin the urgent task of rebuilding our nation and renewing the American dream. I've spent my entire life in business, looking at the untapped potential in projects and in people all over the world. That is now what I want to do for our country.

It's going to be a beautiful thing. Every single American will have the opportunity to realize his or her fullest potential. The forgotten men and women of our country will be forgotten no longer. 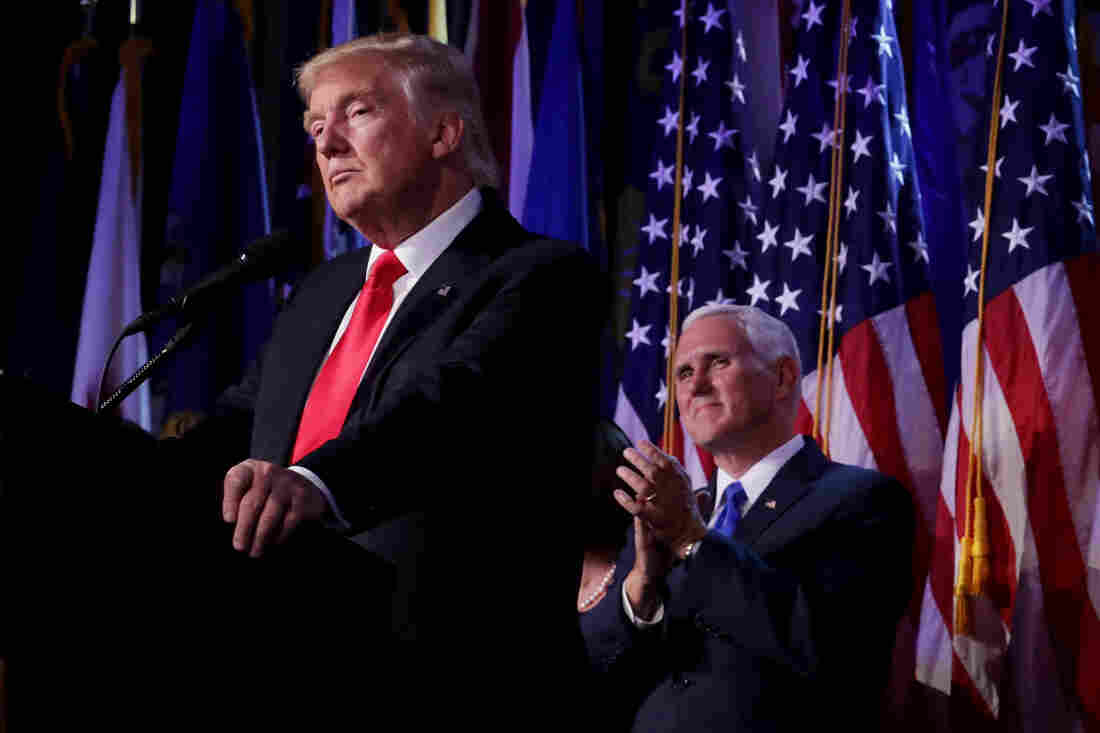 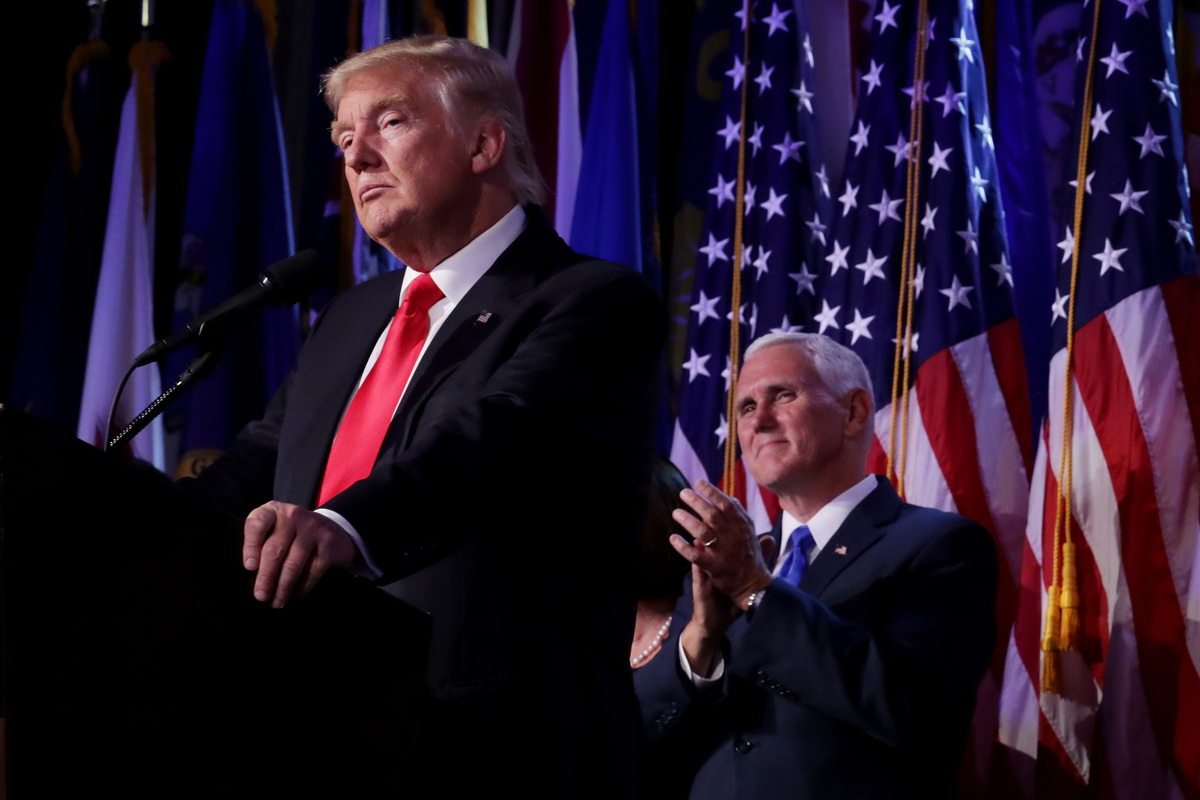 Republican president-elect Donald Trump delivers his acceptance speech as Vice president-elect Mike Pence looks on during his election night event at the New York Hilton Midtown in the early hours of Wednesday morning.

We are going to fix our inner cities and rebuild our highways, bridges, tunnels, airports, schools, hospitals. We're going to rebuild our infrastructure, which will become, by the way, second to none and we will put millions of our people to work as we rebuild it.

We will also finally take care of our great veterans. They've been so loyal and I've gotten to know so many over this 18-month journey. The time I've spent with them during this campaign has been one of my greatest honors, our veterans are incredible people.

We will embark upon a project of national growth and renewal. I will harness the creative talents of our people and we will call upon the best and brightest to leverage their tremendous talent for the benefit of all.

We have a great economic plan. We will double our growth and have the strongest economy of anywhere in the world.

No dream is too big, no challenge is too great. Nothing we want for our future is beyond our reach. America will no longer settle for anything less than the best. We must reclaim our country's destiny and dream big and bold and daring; we have to do that. We're going to dream of things for our country. And beautiful things, and successful things once again.

I want to tell the world community, we will deal fairly with everyone. All people and all other nations. We will seek common ground, not hostility, partnership, not conflict.

And now, I'd like to take this moment to thank some of the people who really helped me with this, what they are calling tonight, a very, very historic victory.

First I want to thank my parents, who are looking down on me right now. Great people. I've learned so much from them. They were wonderful in every regard. I had truly great parents.

I also want to thank my sisters, Maryanne and Elizabeth, who are here with us tonight. Where are they? They're here some place. And my brother Robert. My great friend. And they should all be on this stage, but that's ok. They are great. And also my late brother Fred. Great guy, fantastic guy. Fantastic family; I was very lucky. Great brothers, sisters; great unbelievable parents.

Thank you all. And Lara, unbelievable job. And Vanessa, thank you — thank you very much. What a great group.

You've all given me such incredible support and I will tell you that we have a large group of people. They kept saying we have a small staff — not so small, look at all the people that we have.

And Kellyanne and Chris and Rudy and Steve and David. We have got, we have got tremendously talented people up here and I wanna tell you, it's been very special.

I want to give a special thanks to our former mayor, Rudy Giuliani. He's unbelievable. He traveled with us and he went through meetings. Where's Rudy? Where is he? Rudy. Gov. Chris Christie folks was unbelievable.

The first man, the first senator, the first major politician and let me tell you he is respected in Washington because he's as smart as you get, Sen. Jeff Sessions. Where's Jeff?

Great man. Another great man, very tough competitor, he was not easy, he was not easy ... a friend to me, I got to know him as a competitor because he was one of the folks that was negotiating to go against those Democrats. Dr. Ben Carson. Where is Ben?

And by the way, Mike Huckabee is here someplace and he is fantastic. Mike and his family, Sarah. Thank you very much.

General Mike Flynn. Where is Mike? And General Kellogg. We have over 200 generals and admirals that have endorsed our campaign. And they're special people and it's really an honor. We have 22 Congressional Medal of Honor recipients, we have just tremendous people.

A very special person who, believe me — and you know I'd read reports that I wasn't getting along with him, I never had a bad second with him — he's an unbelievable star, so let me tell you about Reince. And I've said this, I've said Reince and I know it — look at all those people over there — I know it, Reince is a superstar.

But, I said, they can't call you a superstar, Reince, unless we win. Because you can't be called a superstar, like Secretariat. If Secretariat came in second, Secretariat wouldn't have that big beautiful bronze bust at the track. But I tell you, Reince is really a star. He is the hardest working guy.

And in a certain way, I did this — Reince, come up here. Where is Reince? Come up here, Reince. Boy oh boy, oh boy.

It's about time you did this, Reince. My god. Say a few words. Come here. Say something.

REINCE PRIEBUS: Ladies and gentlemen, the next president of the United States, Donald Trump. Thank you, it's been an honor. God bless. Thank God.

TRUMP: Our partnership with the RNC was so important to the success of what we've done.

So I also have to say I've gotten to know some incredible people. The Secret Service people. They're tough and they're smart and they're sharp and I don't wanna mess around with them, I can tell ya. And when I want to go and wave to a group of people, they rip me down and put me back down in the seat. But they are fantastic people, so I want to thank the Secret Service.

And law enforcement in New York City. They're here tonight. These are spectacular people — sometimes underappreciated, unfortunately, but we appreciate them. We know what they go through.

And hopefully, at the end of two years or three years or four years — or maybe even eight years. You will say — so many of you have worked so hard for us —you will say it is something you were proud to do.

Thank you very much.