Accessibility links
From Supreme Court Down, Trump Will Have Swift Impact On Federal Courts Even beyond an open spot on the Supreme Court — preserved by stalling Obama's nominee — the president-elect will get to pick appointees for an eighth of the seats on federal benches. 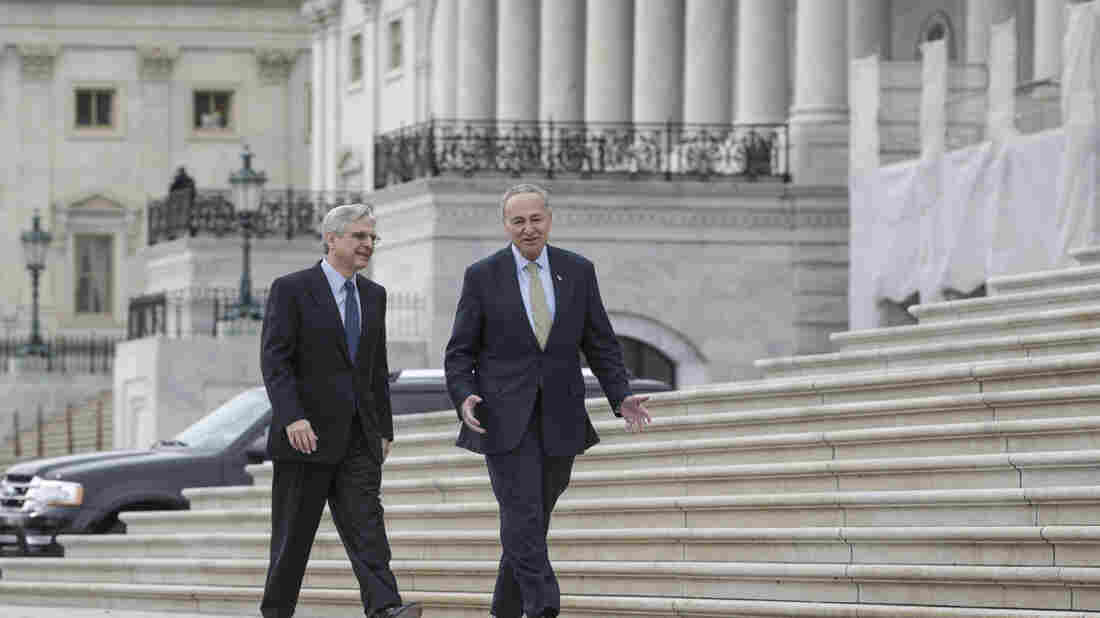 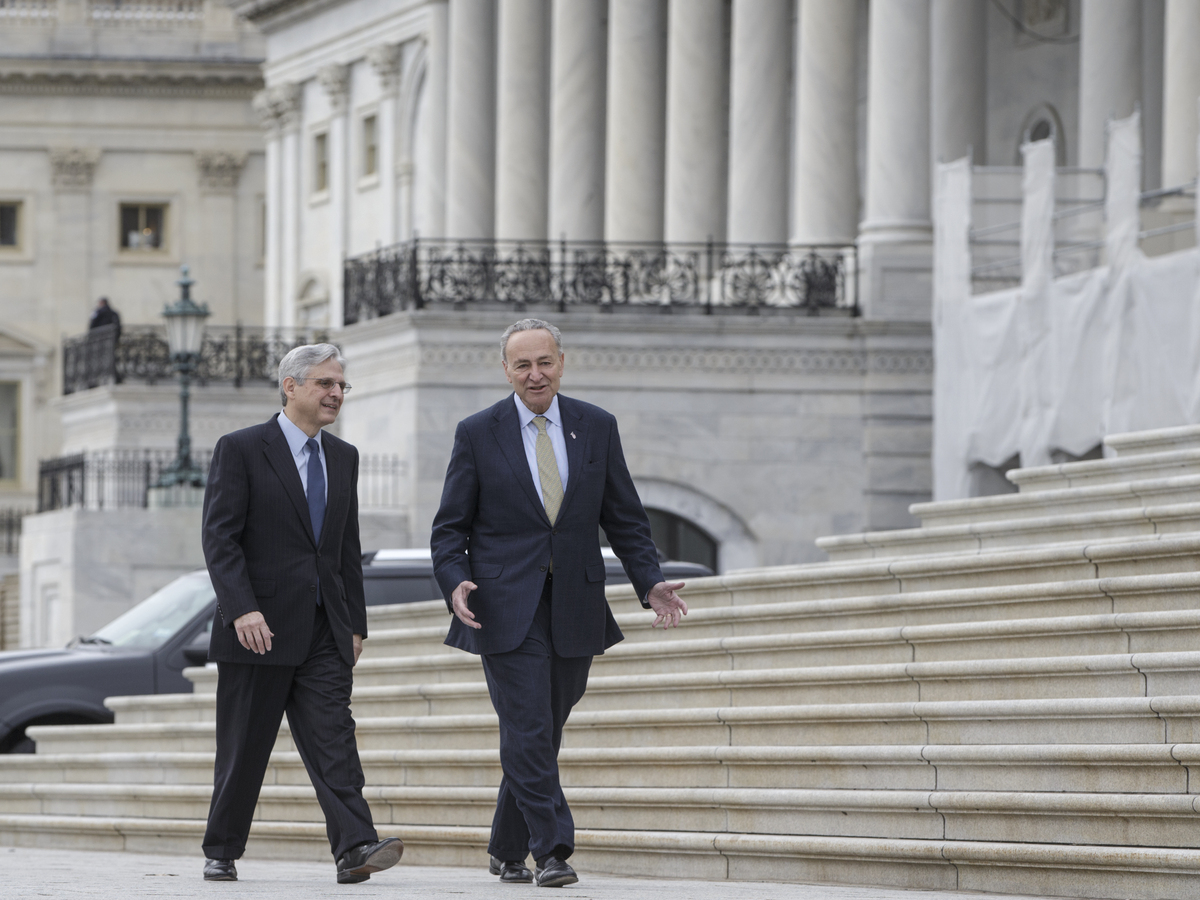 Supreme Court nominee Merrick Garland, left, walks with Sen. Chuck Schumer, D-N.Y., in March at the Capitol in Washington. Schumer is expected to become the new Senate minority leader, but with Donald Trump's election as president, Garland's nomination is done.

First, the vacancy created by the death of Justice Antonin Scalia last February will be filled by President Trump's nominee, not by President Obama's. Obama's nomination of Merrick Garland died with the election returns, in essence vindicating the unprecedented confirmation policy of obstruction adopted by Senate Republican leader Mitch McConnell.

As to whom President-elect Trump might pick and what the process will be, we know at once a lot and a little.

During the campaign, Trump issued two long lists of potential nominees, put together largely by the conservative Heritage Foundation. The lists were, to a person, very conservative, but were remarkable for who was missing — some of the most distinguished conservative judges and lawyers in the country. Among them: Paul Clement, the George W. Bush administration solicitor general who, as a private lawyer, represented conservative challengers to many of the Obama administration's most controversial policies; Brett Kavanaugh, an appeals court judge who carried the limited government banner on the U.S. Court of Appeals for the District of Columbia; and Jeffrey Sutton, the judge who wrote the only appeals court decision in the country upholding state laws banning same-sex marriage.

There has never been any guarantee that Trump will limit his choices to his campaign lists. Indeed, when released the lists were viewed as a way of quelling the fears of religious and social conservatives.

Conservatives note that there are names on Trump's lists, such as federal appeals court judge William H. Pryor, Jr., of Alabama, who would have strong support among GOP evangelical voters — and from an important early Trump supporter in the Senate, Jeff Sessions of Alabama.

And it is unclear who, if anyone, outside the Heritage Foundation orbit will be advising Trump on the Supreme Court pick. GOP Senate leader McConnell did say Wednesday that he and other Republican senators have views.

"I've got a few suggestions I'd like to make, and I think he's open to our suggestions," he said, adding that "I think it's the way it ought to work."

Democrats likely will have no input — there is no need to extend an olive branch to the other side, as there was when President Obama picked Merrick Garland, in part because Republicans controlled the Senate.

Obama was explicit about one of the reasons he picked Garland: For years Republicans had suggested him as the democratically appointed lower-court judge they favored, the one they could live with. That solicitude for the opposition party's views is not being replicated now because Republicans still control the Senate, and have little need for Democratic support.

True, the filibuster rule is still in place for Supreme Court nominees, requiring 60 votes to end debate — considerably more votes than Republicans will have in the Senate. But if there were a Democratic filibuster, Republicans would almost certainly would change the Senate rules, just as Democrats would have done if they had prevailed on Election Night.

In the short run, Trump will have more than 100 other judicial nominations to make to the lower federal courts. There are 103 judicial vacancies on the federal trial and appellate courts, or roughly an eighth of the entire federal judiciary. There are 59 pending Obama nominations to fill a majority of those seats, but Republicans have been artful about slow-walking these Obama lower court appointments, and the Republican Senate has confirmed only 11 judges since the beginning of the year. Now all of those pending appointments will die.

If history is any guide Republicans will abandon — as they have before — traditional protections for the minority party, meaning that the views of opposition party senators will not be considered in the appointment of judges, even from states where both senators are Democrats. Senate Democrats, even when they controlled the Senate, did honor those GOP views, but Republicans have forsaken that traditional accommodation in recent times.

In the longer run, the focus could well return quickly to the Supreme Court if there are more vacancies — a distinct possibility. Justice Ruth Bader Ginsburg, appointed by President Clinton, is 83; Justice Anthony Kennedy, a center-right justice appointed by President Reagan, is 80; and Justice Stephen Breyer, a Clinton appointee, is 78.

The result could well be the reversal of Roe v. Wade, the court's 1973 abortion decision; a court more hostile to the regulation of Wall Street; a court far more deferential to religious objections to anti-discrimination laws; and many more such dramatic legal turns to the right.

Particularly interesting will be how the Supreme Court's view of presidential power evolves. In the eight years of the Obama administration, the court's conservatives have demonstrated an unusual and deep suspicion about executive power, while the court's liberals have shown relative deference. It will be interesting to see if that changes when the president is a Republican with an agenda, instead of a Democrat.