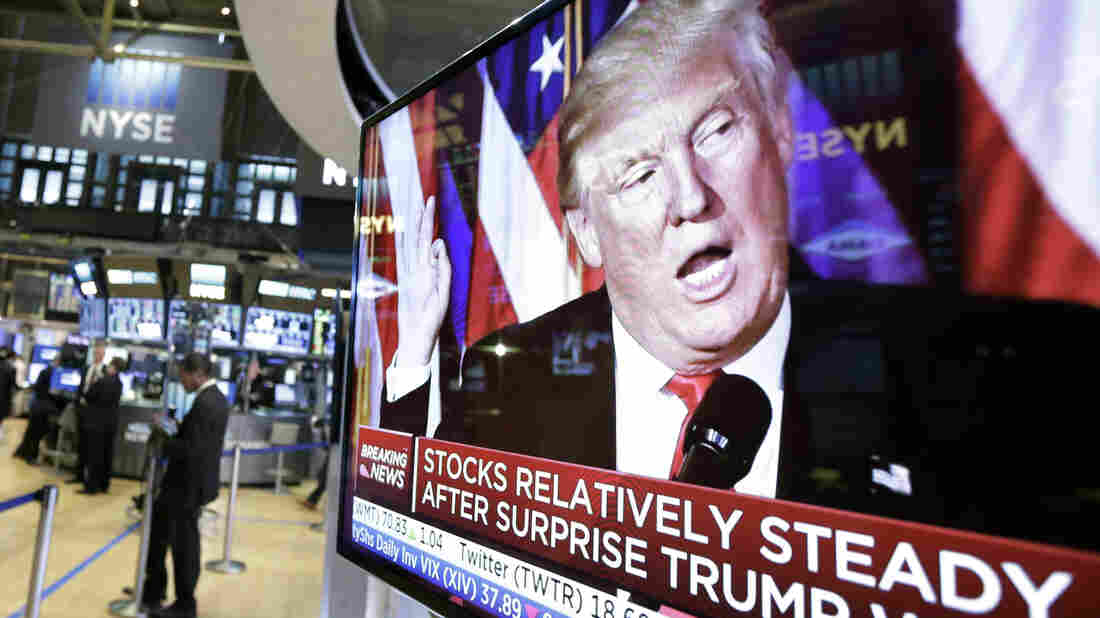 An image of President-elect Donald Trump appears Wednesday on a television screen on the floor of the New York Stock Exchange. Business leaders are taking a wait-and-see approach to his administration. Richard Drew/AP hide caption 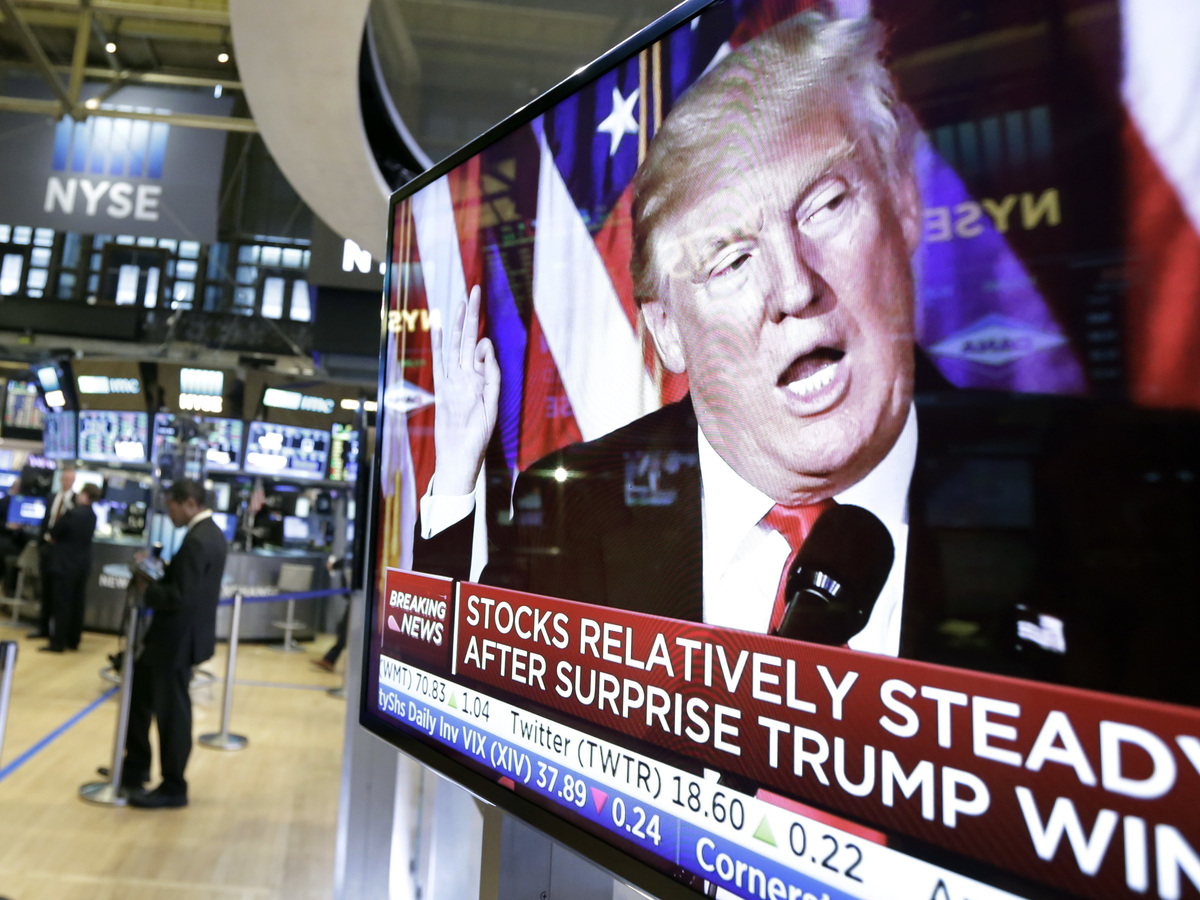 An image of President-elect Donald Trump appears Wednesday on a television screen on the floor of the New York Stock Exchange. Business leaders are taking a wait-and-see approach to his administration.

Building a better economic future for Americans who feel they've been left behind was a key component of Donald Trump's message during his campaign. It resonated strongly with white, working-class voters: manufacturing workers hurt by globalization, coal miners hurt by the movement to cleaner energy, and others.

But what will the details of Trump's economic policy agenda actually look like? At this point that's kind of opaque — he has no political track record, and his statements about the economy have been all over the map.

Trump spooked the financial world when he seemed to suggest that the U.S. should default on Treasury bonds. He's talked about slapping trade tariffs on China, which could start a trade war. This is stuff that keeps economists and business leaders awake in bed at night. Hillary Clinton was a known quantity; Trump is a wild card.

The uncertainty, at first, sent stock markets around the world plummeting as Trump's surprise win became a reality on election night. Dow futures around midnight were down around 800 points. OK. That seemed to make sense.

But then, something happened: Trump spoke.

He sounded more presidential, offered a little specificity around his economic agenda, and stocks surged back. The Dow Jones industrial average closed up 256 points (1.4 percent) on Wednesday.

Why the whipsaw from panic to sudden confidence by investors? And how do you separate Trump's campaign bluster and odd pronouncements during the campaign, from what he is actually likely to try to do for the economy as president?

There do seem to be a few things in Trump's agenda that can be banked on. Maybe the one thing we can say most confidently about Trump is this: He likes to build things — often very big things. In his acceptance speech last night, that was front and center.

"We are going to fix our inner cities and rebuild our highways, bridges, tunnels, airports, schools, hospitals," Trump said. "We're going to rebuild our infrastructure — which will become, by the way, second to none. And we will put millions of our people to work as we rebuild it."

That seemed to encourage investors and calm the panic selling in the markets.

Of course, President Obama has wanted to embark on a big infrastructure spending program for years, as a way to create jobs and boost the economy. The Republican Congress blocked him, but one of the outcomes in this crazy campaign and election may be that President Trump will be able to do what President Obama couldn't.

"I believe an infrastructure bill of $500 billion is now possible," says David Kotok, chairman and chief investment officer at Cumberland Advisors. "And the introduction of it comes in early 2017, after the new regime takes office."

Stephen Calk, a Chicago banking executive and senior economic adviser to Trump, says another big priority will be creating more jobs in the energy sector. He says Trump "wants to create those jobs he promised by generating clean coal, developing and expanding safe fracking, as well as safe offshore energy production."

Lower taxes also seem a likely part of Trump's agenda. The plan he released in the months ahead of the election reduced the number of tax brackets, lowered corporate taxes, and eliminated the estate tax.

The overall economy still is likely to get at least some degree of a hangover from the surprise Trump victory — while Clinton's policies were expected to be an extension of Obama's, Trump's are more unpredictable, and many businesses may decide to be cautious about hiring and spending until they know more. Economists say that's likely to make economic growth at least a bit more sluggish until the country gets more clarity.

Many business leaders are hoping that Trump quickly assembles a level-headed economic team made up of people with known policy track records. They say that would provide some much-needed predictability, and they hope such a team would move him away from the trade-bashing rhetoric of the campaign.

"We've got to get off this thing — what got him elected is not going to make him a good performer," says Carlos Gutierrez, a former Republican commerce secretary under George W. Bush and a former CEO of Kellogg. Speaking on CNBC on Wednesday, he said the things that got Trump elected were "demagoguery, populism, 'we're gonna bring jobs back.'

"What does that mean? We're gonna bring textile jobs back? We should be talking about bringing new jobs here — innovation, new businesses, startups."

Gutierrez said Trump's campaign rhetoric around all this was "either very cynical, or it betrays any knowledge of how the world works."

This all creates a tricky path for President-elect Trump: He campaigned hard on dismantling NAFTA and threatening trade barriers with Asia, but just about all economists — Republicans and Democrats alike — say retreating from global trade in this way would hurt the overall economy, not help it.