Accessibility links
Trump Is Another Republican Striking A Blow For The Way Things Used To Be As Trump succeeds Obama, it is hard to imagine a wider gulf between sets of policies, or men with less use for each other. But such contrasts between consecutive administrations are the national norm. 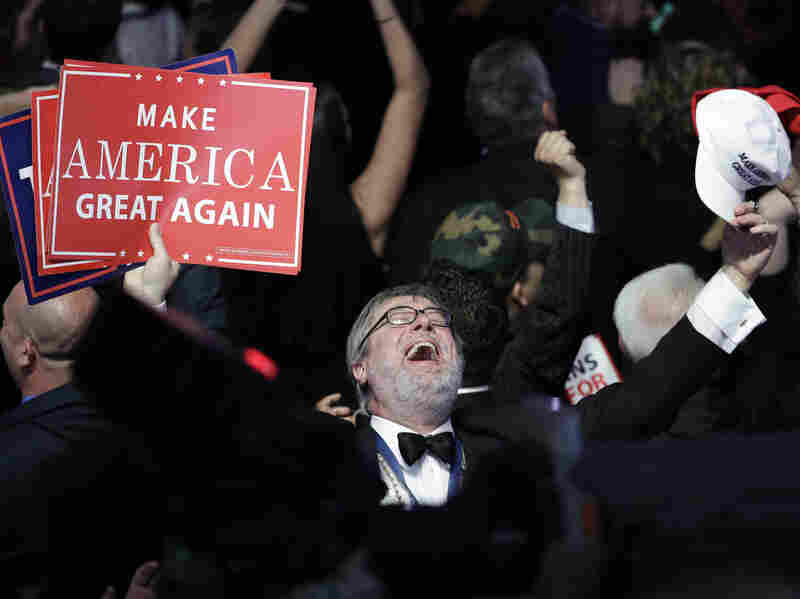 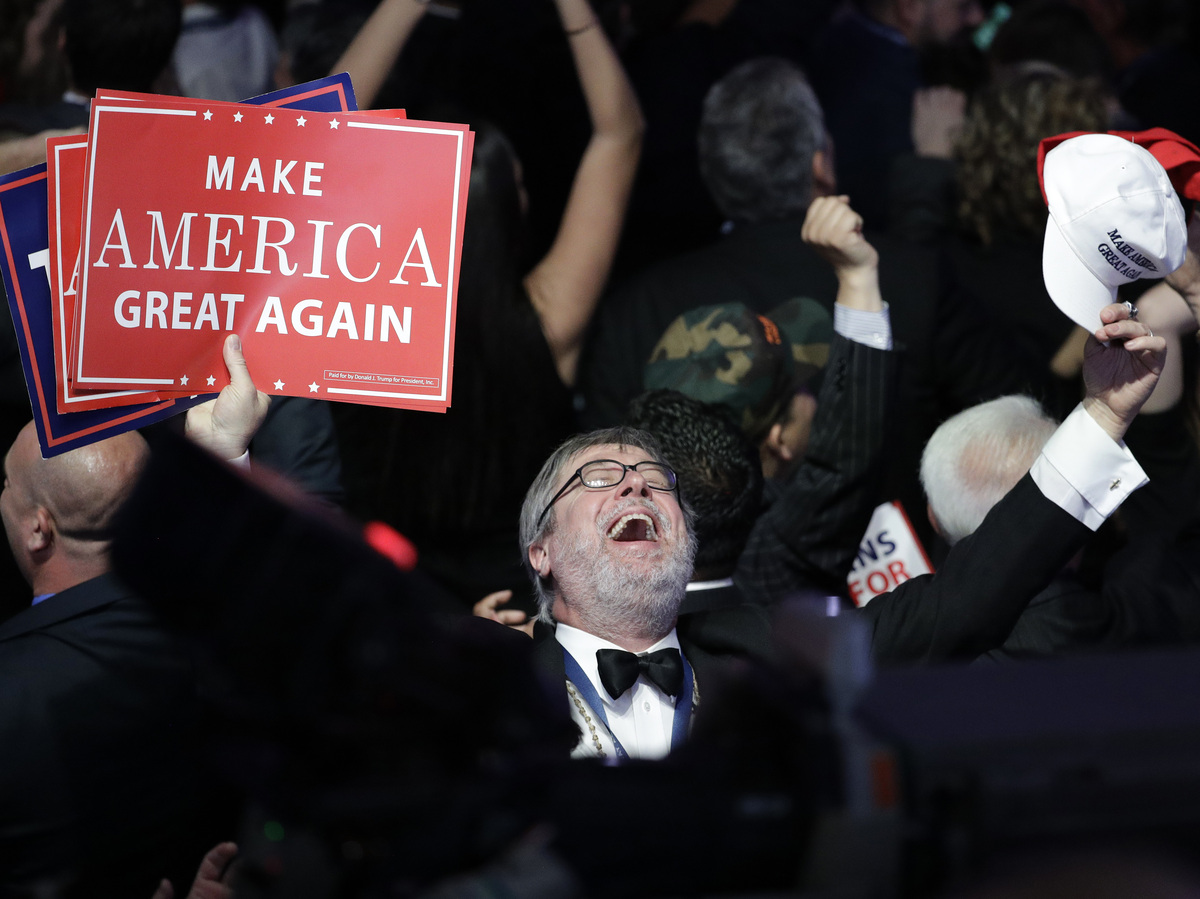 Supporters of Donald Trump react as they watch the election results during Trump's election night rally on Tuesday.

When American voters must choose a new president, reaction tends to rule. Given a choice between continuity and contrast, we favor contrast — even when the retiring incumbent leaves office with relatively high public approval.

This sometimes is called the pendulum effect: The farther the pendulum swings in one direction, the farther it is likely to swing back. In physics, every action has an equal and opposite reaction; in politics, the pushback sometimes can be disproportionate.

The rule has obvious applications to candidate personalities and political parties, but it also relates to the long waves of history, and the most profound changes in our national life.

Thus we have Barack Obama, elected in 2008 largely because he offered such a dramatic divergence from two terms of George W. Bush — who himself had been a stark contrast to Bill Clinton.

This is more than just a habit — it is closer to being our nature. The country chooses more than a person or a party to occupy the Oval Office, it chooses a vision of itself, whether it actively contemplates its decision in those terms or not. And then, we find ourselves wanting something different — sometimes very different.

Thus we have the spectacle of Obama being succeeded by Donald Trump, who had been something of a nemesis for years as he questioned the president's legitimacy and birthright citizenship. It is hard to imagine a greater gulf between two sets of policies, or two men with less use for each other.

Obama himself had been a sharp departure in 2008 from George W. Bush, who had been quite a change from Bill Clinton in 2000. The party loyalties of these men were only the beginning of their contrasts in outlook, demeanor and personal background.

PHOTOS: The Emotional Arc Of A Political Upset

Stepping back a bit further in memory, Clinton had been a youthful alternative to George H.W. Bush in 1992. Ronald Reagan's persona in 1980 had been worlds apart from Jimmy Carter's, and Carter's an antidote to Richard Nixon's in the 1970s.

Each of these men had something that characterized his candidacy, and it stood vividly apart from what went before. Each came to office with a certain vision of a White House under new management, entirely transformed. Call it a message or a myth, but these were the means by which their campaigns sought to fashion a mandate for their presidencies.

John F. Kennedy in 1960 ran against the relatively quiescent 1950s, saying: "Let the word go forth to a new generation of leadership." His message was expansionary and inspirational, symbolized by the promise to put a man on the moon.

Now we have Trump with his vow to "make America great again." This seems to mean bringing back whatever elements of the economy or the culture his various rally audiences might be missing — manufacturing jobs, coal mines, nuclear families, tighter restrictions on abortion and immigration. In an interview with The New York Times editorial board earlier this year, Trump was asked when exactly America had last been "great." His answer: the late 1950s.

JFK was scarcely the first elected Democrat to be associated with progressive visions; that legacy dates back to Woodrow Wilson's administration, through Franklin Roosevelt's "New Deal" in the 1930s, Harry Truman's "Fair Deal" in the 1940s and on to Lyndon Johnson's "Great Society" in the mid-1960s. They represented a more activist federal government, a shift in economic and political power from capital to labor, a gradual acceptance of racial diversity and a commitment to civil rights.

Republicans' promises have been more restorative in nature: Warren Harding's "Return to Normalcy" in the 1920s, through Calvin Coolidge and Herbert Hoover, to Dwight Eisenhower's peacetime equilibrium in the 1950s. Nixon and Reagan invoked nostalgia for the Ike years — the latter with a frank appeal to the old-fashioned values of "work, family, neighborhood." (Reagan even had bumper stickers that said: "Let's make America great again!")

Restorative periods followed as reactions to eras of significant social change – especially regarding race and gender.

In the South, the Civil War and Reconstruction period, with the abolition of slavery and the attempt to mainstream former slaves, produced a backlash among the Southern Democrats who dominated local and state offices. Their restrictive "Jim Crow" laws and segregation kept the descendants of slaves from achieving much beyond emancipation.

Up north, immigrants crowding into urban centers and showing up on voter rolls gave rise to nativist sentiment and the Know-Nothing Party, which resisted the new arrivals.

In the 20th century, civil rights marches and boycotts led to landmark legislation in the Johnson years, including voting rights — but what followed was Nixon's "Southern Strategy" for winning the White House in 1968. Combined with widespread resistance to other changes — including "women's liberation," legal abortion and bans on school prayer — this conservative game plan helped the GOP win five of the next six presidential elections.

That skein was broken by Clinton's win in 1992, but his breakthrough for Democrats at the presidential level led directly to Republican takeover in Congress (the GOP's first control of both chambers in 40 years). The Republicans have held the House for 18 of the 22 years since, and the Senate through most of that same era.

During that time, the presidential pendulum has continued to swing, from Clinton to Bush to Obama. So for the Democrats to hold the White House past 2016 would have been surprising.

In a sense, Hillary Clinton seemed uniquely capable of doing it — and of becoming the first woman president. But she was vulnerable to the populist-nativist appeal of Trump, in no small part because of her longtime association with the women's movement, with power in Washington and with money on Wall Street. It didn't help to have her rhetorically toss half of Trump's supporters into one "basket of deplorables" or another.

Trump won this week by capturing two-thirds of the white voters who do not have a college degree, and while he sacrificed some of the GOP's traditional strength among college graduates, he lost less of it than anticipated (especially among white women with degrees). His votes wound up being located in just the right places, including rural areas of the big industrial states around the Great Lakes that had boosted Bill Clinton and Obama.

Trump is a disruptive figure, to be sure — he has shattered the usual categories of the Republican Party and realigned the loyalties of the working class. But in one sense, his victory reinforces something quite traditional – the rhythm of presidential cycles and the alternation of progressive and restorative attitudes in the White House.