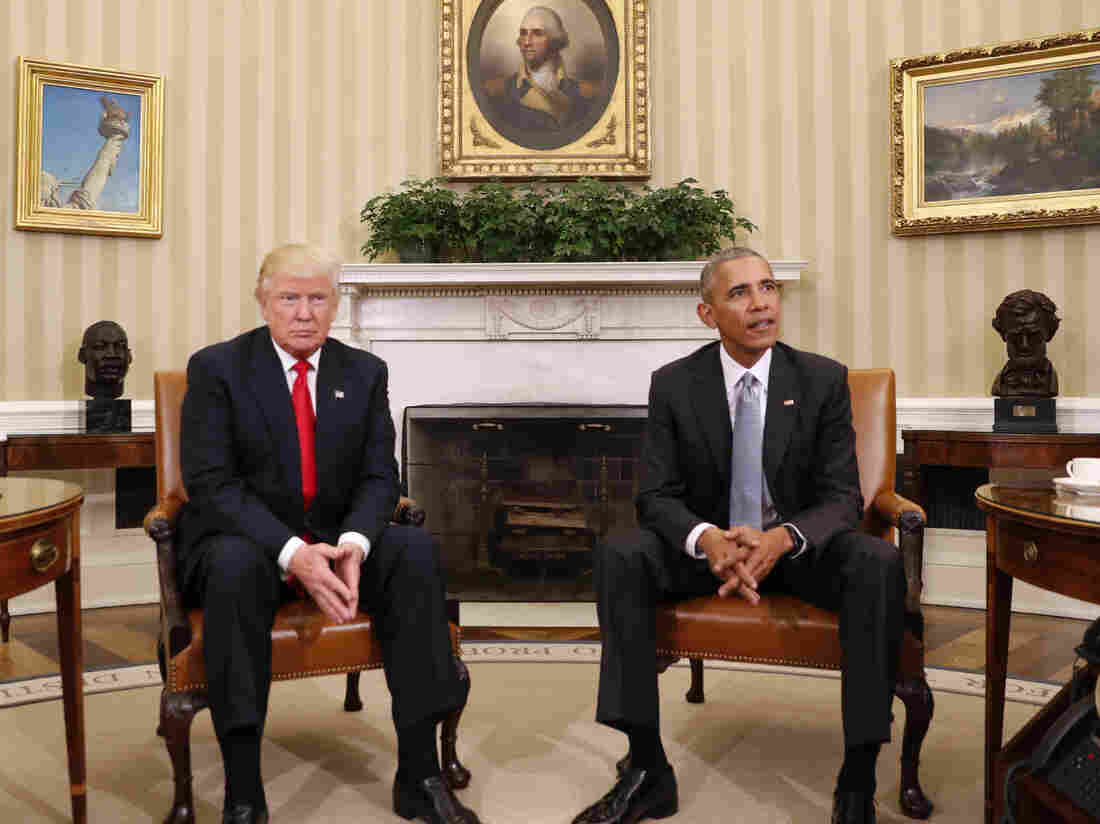 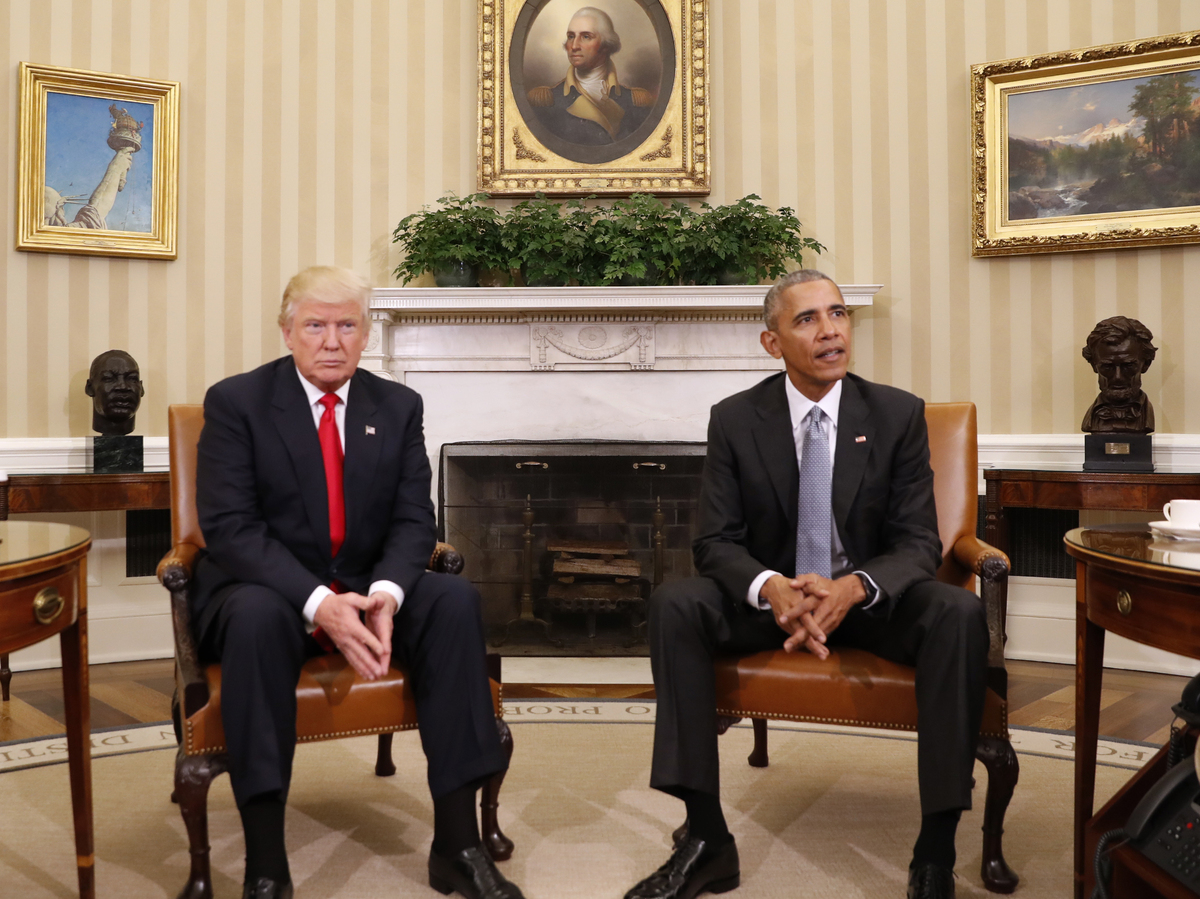 President Obama meets with President-elect Donald Trump in the Oval Office of the White House in Washington on Thursday.

It was perhaps the unthinkable: President Obama meeting with his successor at the White House in the first step to carry out the peaceful transition of power in the American republic — and that successor is Donald Trump.

But that's exactly what happened Thursday morning in what amounts to one of the more surreal moments in American political history.

President-elect Trump, who rose to political fame by falsely questioning the birthplace of the sitting president, said he had "great respect" for Obama, called him a "very good man" and said he would seek his "counsel" in the future. Trump, who noted that the two had never met before, said they were slated to speak for maybe 10 to 15 minutes, but the meeting, which lasted more than an hour and a half, could have gone on even longer. Trump said they talked about "difficulties" around the world but also about accomplishments.

"I very much look forward to dealing with the president in the future, including counsel," Trump said. "He's — he explained some of the difficulties, some of the high-flying assets, and some of the really great things that have been achieved."

Obama described it as an "excellent conversation" and "wide-ranging" — from how to organizationally set up a White House to foreign and domestic policy.

4 Questions Democrats Now Have To Grapple With

"I believe that it is important for all of us, regardless of party and regardless of political preferences, to now come together, work together to deal with the many challenges that we face," Obama said, adding that he wanted Trump and his wife, Melania, the incoming first lady, to feel "welcome" as they make the transition.

"And most of all," Obama continued, "I want to emphasize to you, Mr. President-elect, that we now are going to want to do everything we can to help you succeed, because if you succeed, then the country succeeds."

The tone and grace of the meeting stood in stark contrast with the contentious campaign and the history between these two. President Obama openly mocked Trump at a White House Correspondents' Dinner. Less than a year ago, last December, when Trump was ascendant in the polls, this reporter wrote:

"[Obama] joked in 2011 that Trump, who was hot on the trail of Obama's birth certificate, was a conspiracy theorist waiting to reveal the fake moon landing, then roasted him for making the hard decisions — like firing Gary Busey instead of Lil' Jon or Meatloaf on Celebrity Apprentice.

"Just eight months ago, Obama joked that Trump was 'here. Still.' That got big laughs.

"But it's Trump's supporters who are laughing now."

Trump has been a thorn in Obama's side. He rose to political fame using the birther movement to translate his pop-culture notoriety as a reality-TV star into an improbable winning presidential campaign. That birther movement questioned the president's place of birth and thereby the legitimacy of the first African-American president. The president, of course, was born in Hawaii. Trump finally later acknowledged that during this campaign but made no apology for his crusade.

Trump used the issue to stir up a base of antipathy toward this president. It wasn't even so much that the largely rural, white, populist voters who eventually propelled Trump into the White House really believed the accusations and innuendo to be true. But they liked that Trump spoke to them when they felt ignored — by the professional class, the Washington establishment and the media elites — and was willing to annoy and disrupt them all.

What Trump accomplished is nothing short of a populist, white working-class revolt — even as he lost the national popular vote to Democrat Hillary Clinton. Trump was able to win giant margins in white, rural counties, especially in the Industrial North and Midwest, like Pennsylvania, Michigan and Wisconsin. It was enough to offset Clinton's margins in the cities and suburbs, upending decades of the fundamentals of political thought and analysis. 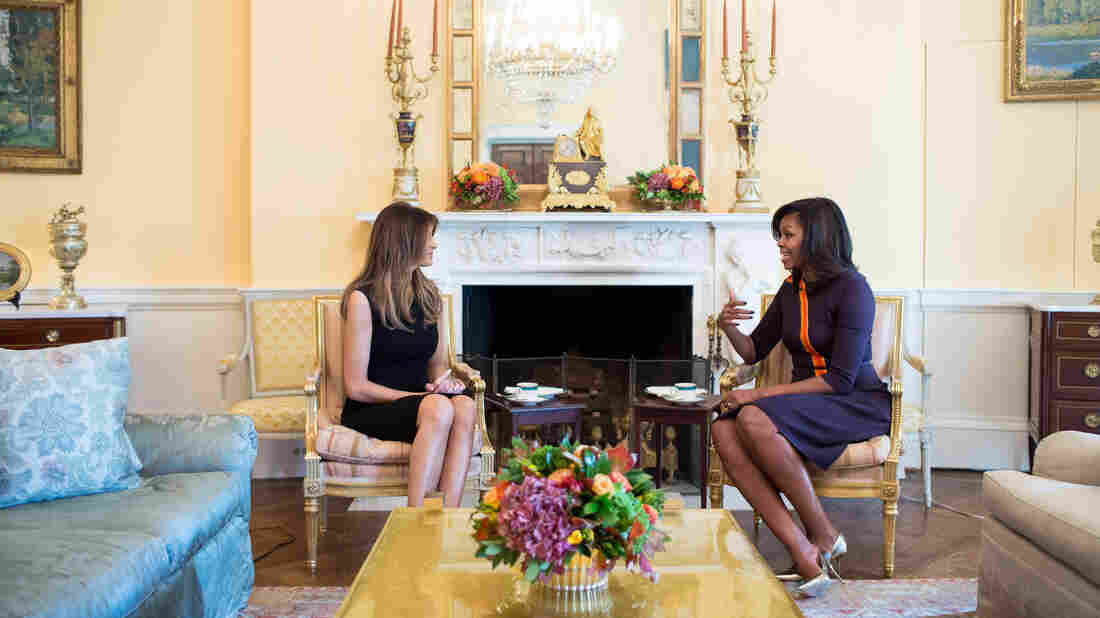 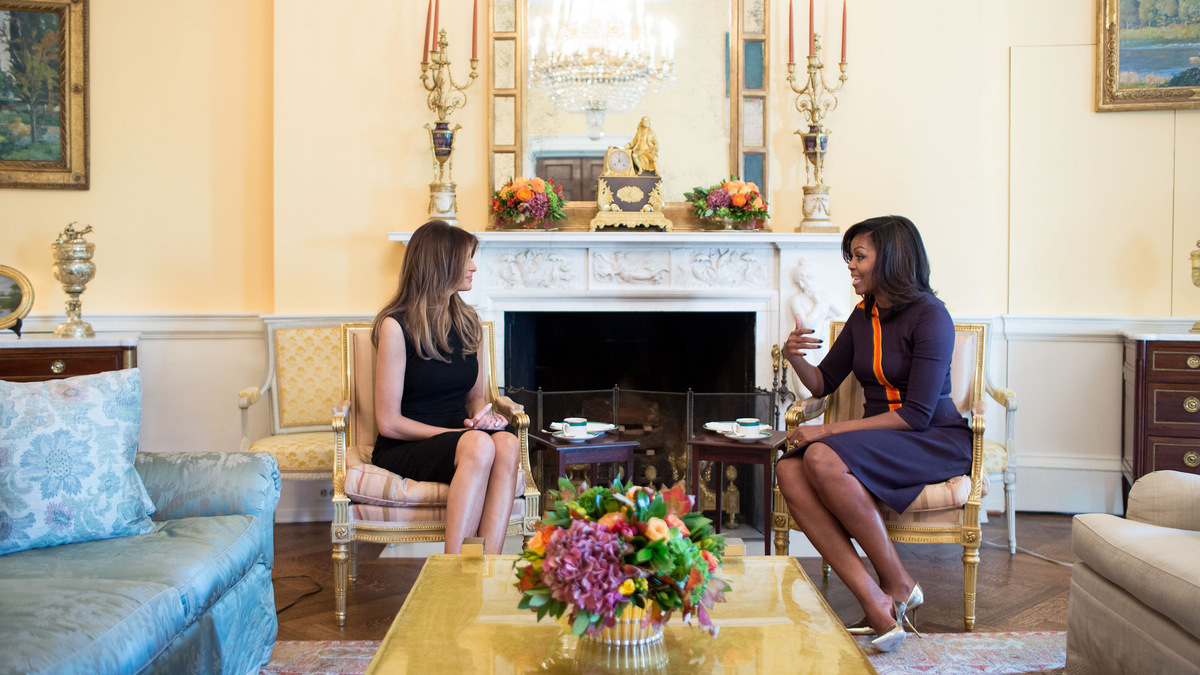 First Lady Michelle Obama meets with Melania Trump for tea in the Yellow Oval Room of the White House on Thursday.

Republican National Committee Chairman Reince Priebus has been rumored to potentially serve as Trump's chief of staff, though he told NBC he has had "no conversations" about that. Kushner also appears poised to play a key role as an adviser in President Trump's inner circle; it would be remarkable, though, if he were tapped as chief of staff, given he's a member of the family. He's also the publisher of the New York Observer.

After meeting with Senate Majority Leader Mitch McConnell, Trump spoke briefly saying his "really great" priorities will be immigration, "big league jobs" and health care. As NPR's Ailsa Chang reports, when asked if he's going to ask Congress to pass a Muslim ban, he declined to answer the question and walked on. 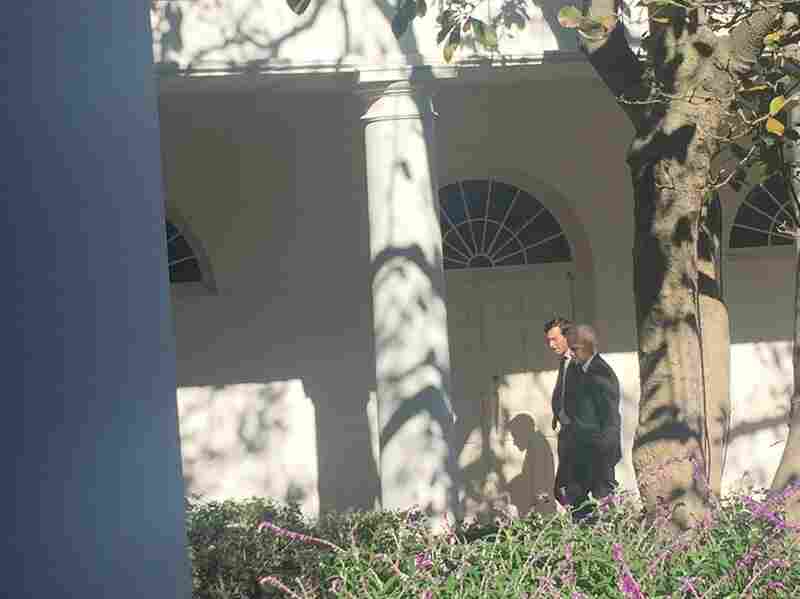 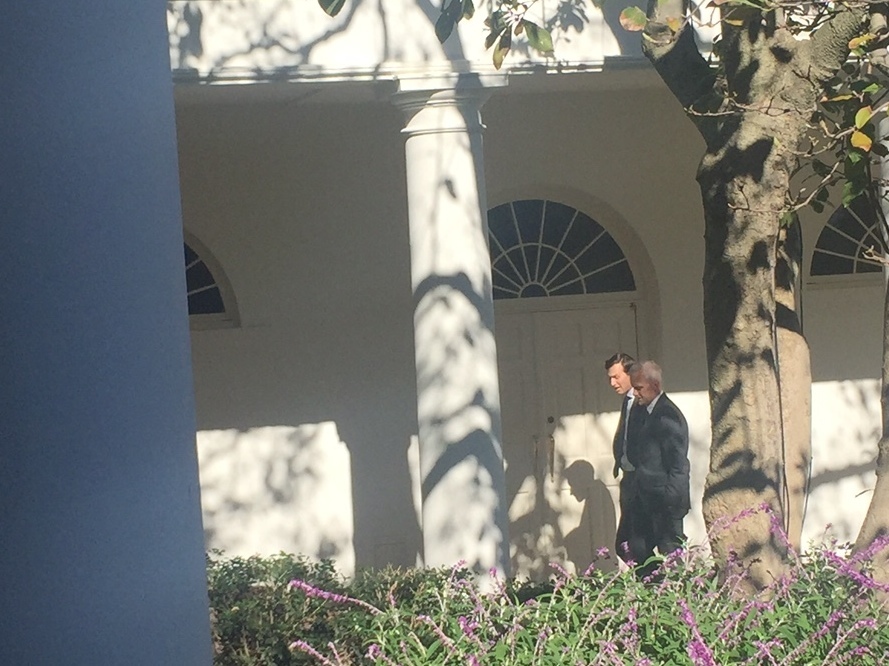 Chief of Staff Denis McDonough takes Trump's son-in-law Jared Kushner for a walk on the South Lawn of the White House. Kushner, husband of Ivanka Trump, played a key role in Trump's campaign.

Trump also met with House Speaker Paul Ryan in the speaker's office, saying after the meeting: "I think we are going to absolutely spectacular things for the American people and I look forward to starting --- quite frankly we can't get started fast enough."

Ryan praised Trump's victory as "one of the most impressive" ever seen and also conveyed a sense of urgency saying the two talked about "how we are going to hit the ground running to get this country turned around and make America great again." The two also said they looked forward to working together on health care, immigration, lowering taxes and other issues.

According to a pool report from Politico's Edward-Isaac Dovere, Trump said he had a "great meeting" with Ryan and then the speaker led him out onto his balcony.

Ryan pointed to various sites in the city and as well as Trump's new hotel in downtown D.C. saying "that's it right there, that's the Old Post Office Building."

A previous version of this story stated Donald Trump called President Obama a "very fine man." In fact, he called him a "very good man."