Accessibility links
Second-Generation Sportscaster Joe Buck: 'I Hear My Dad More In Me Now' "I will forever be known to some people as Jack Buck's son," the announcer says. "And thank God he and I were best friends or that would drive me nuts." His new book is called Lucky Bastard. 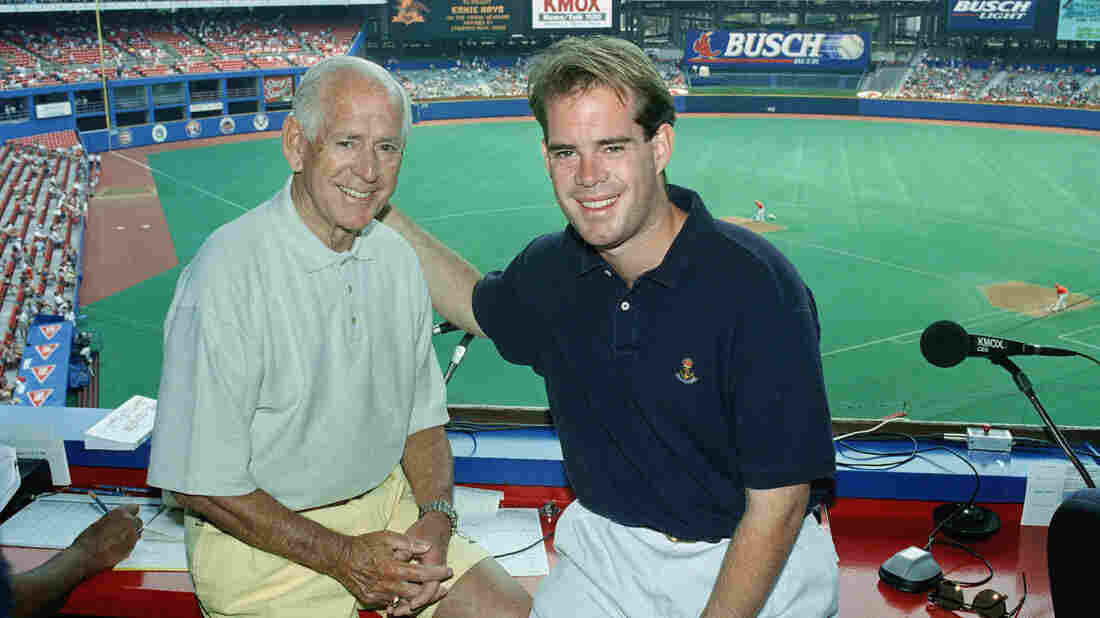 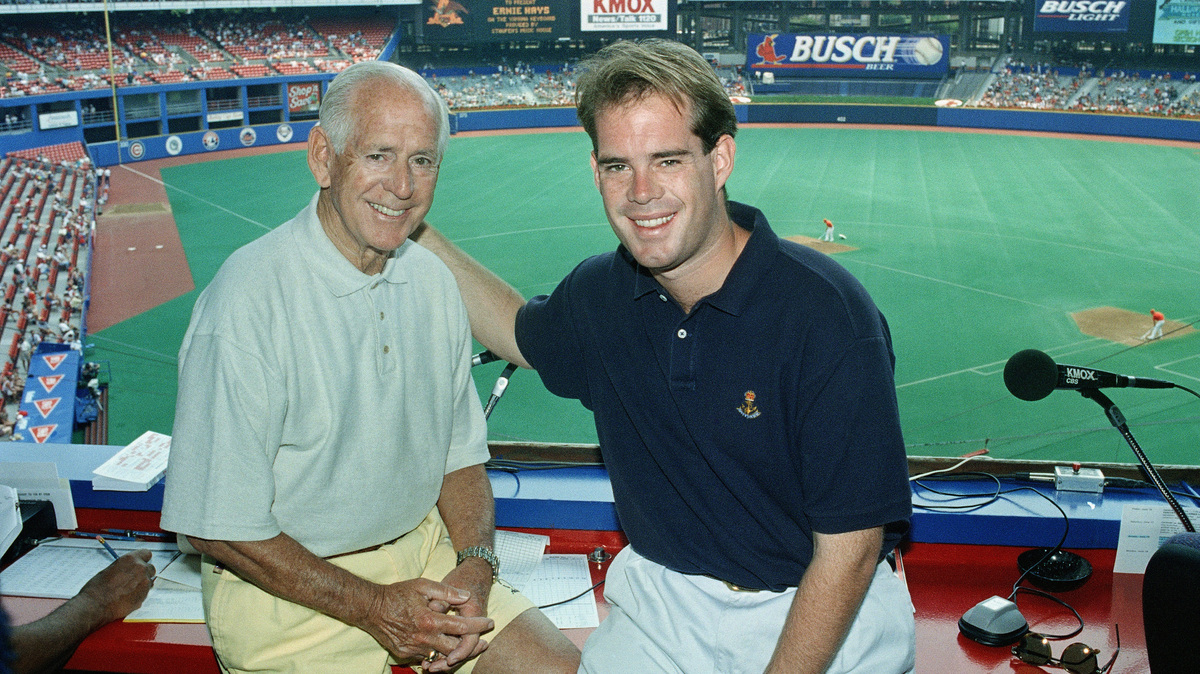 Since 1996, sportscaster Joe Buck has been announcing Super Bowls, golf tournaments, bass fishing, motorcycle jumps and, of course, baseball. In fact, he did the play-by-play for seventh game of the World Series this year between the Cleveland Indians and the Chicago Cubs — a game that drew the largest audience in a generation.

But Joe Buck wasn't the first sportscaster in his family: His father, Hall of Fame announcer Jack Buck, was the longtime voice of the St. Louis Cardinals. He worked into his 70s announcing Cardinals games and Monday Night Football, all while struggling with Parkinson's disease and diabetes.

Joe Buck's new book is called Lucky Bastard: My Life, My Dad, and the Things I'm Not Allowed to Say on TV. He tells NPR's Scott Simon that he and his dad were best friends. "It wasn't as much father-son," he says, "we were buddies and I miss the hell out of him."

He was the strongest, toughest guy I knew. He was a Depression-era kid; he was in World War II; he was wounded in Germany; he came back to the States; he only went to college because there was the G.I. Bill. Dirt poor, self-made and was a genuine good man. 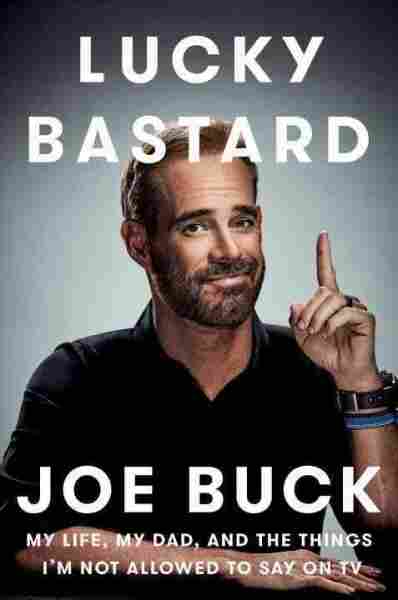 My Life, My Dad, and the Things I'm Not Allowed to Say on TV

by Joe Buck and Michael Rosenberg

Title
Lucky Bastard
Subtitle
My Life, My Dad, and the Things I'm Not Allowed to Say on TV
Author
Joe Buck and Michael Rosenberg

So when he was sick and he had diabetes and he had Parkinson's and he had a pacemaker and eventually had lung cancer and then an infection, which took his life, he didn't let anything slow him down. And if he was walking in or out of the ballpark, he'd stand there and sign autographs. And when you have severe symptoms of Parkinson's, it's not easy to do anything with your hands let alone sign a baseball. But he would do it because he felt like he owed that to anybody who wanted it.

So, you know, his line was, "Let them worry about me shaking," and "I'm not worried about it." And it was a great way to see somebody attack life and not let whatever ailments he had stop him from doing what he loved to do. And you know, of all the gifts that he gave me, that is No. 1: to plow ahead, keep on moving. Whether it was my vocal issue in 2011, going through divorce as he did — you got to pick yourself up and keep going forward. And I saw him do that. He didn't tell me it. I watched it.

Look, the benefits far outweigh anything on the negative side, I'm smart enough to know. ... I'm lucky that I was born to these parents. I'm lucky that my dad wanted to be around me, that he took me to all these National League cities by the time I was 12.

But I think when I was a kid in St. Louis, which is a really small community, I was aware that eyes were on us and I was aware at an early age that if I screwed up I was going to be the focus; if I was in a group of who-did-what and who-was-wrong and my dad would have to pay some sort of public price for it. And then when I started, you know, I am the biggest beneficiary of nepotism that I know. I was broadcasting Cardinal baseball in the major leagues at the age of 21, and that only happened because my last name was Buck. At the time, I fought that. ...

... I will forever be known to some people as Jack Buck's son. And thank God he and I were best friends or that would drive me nuts. Instead, I consider it a high compliment.

But there's also a little bit more of a sharp knife out there, as far as critics are concerned, that you better be as good as the old man, or in some cases better, to be considered a success. And I know I do a decent enough job to keep my job, but I will forever be known to some people as Jack Buck's son. And thank God he and I were best friends or that would drive me nuts. Instead, I consider it a high compliment.

You know, in baseball more than football — certainly more than golf — when you do the national play-by-play it is a no-win situation. And I say that because in baseball ... all season long, 162 games, you get your local guys. And the fans know: Those two guys on the air think the way I think; they root the way I root; they're happy when my team wins; they're sad when my team loses. And when we show up, I have to be happy for both sides. And if I'm happy for both sides, fans in each city think, "Well, that means he likes that team and not mine." It's why my Twitter bio or handle or whatever it's called says, "I love every team except yours." And so it's just my tongue-in-cheek way of saying I can't win.

Female Sportscasters Feel Staying On Defensive Is Part Of The Job

On losing his voice after having hair plug surgery

The deal is I had it done six times where they used a local anesthetic. And the surgeon — as I'm awake and he's basically scalping me — would listen to NPR while I sat there for six hours and he was doing this procedure. ... One day this guy comes to me, he goes, "You know, you can do this with a general anesthetic." It's like, "What?" So I did it with a general anesthetic. There was an issue during the procedure and I woke up with the laryngeal nerve not firing my left vocal cord and I couldn't talk right for almost a full year.

I hear my dad more in me now than I ever have. And I don't know if that's because I'm getting a little older, if it's because I went through the vocal issues I went through, but there are times where I hear highlights that I'm a part of and I think, Man, that sounds a lot like my dad. I don't remember thinking that in the mid-'90s. I think I had a little bit more pubescent voice back then and now that I've been through life and I've taken on as much secondhand smoke as I have ... I'm getting there as I get older. So when people say that, it's the greatest compliment I could be given.