Accessibility links
How Did Donald Trump Win The Presidential Election And Hillary Clinton Lose? Clinton failed to fire up the Obama coalition in a big way, and Democrats have cratered with blue-collar white voters. 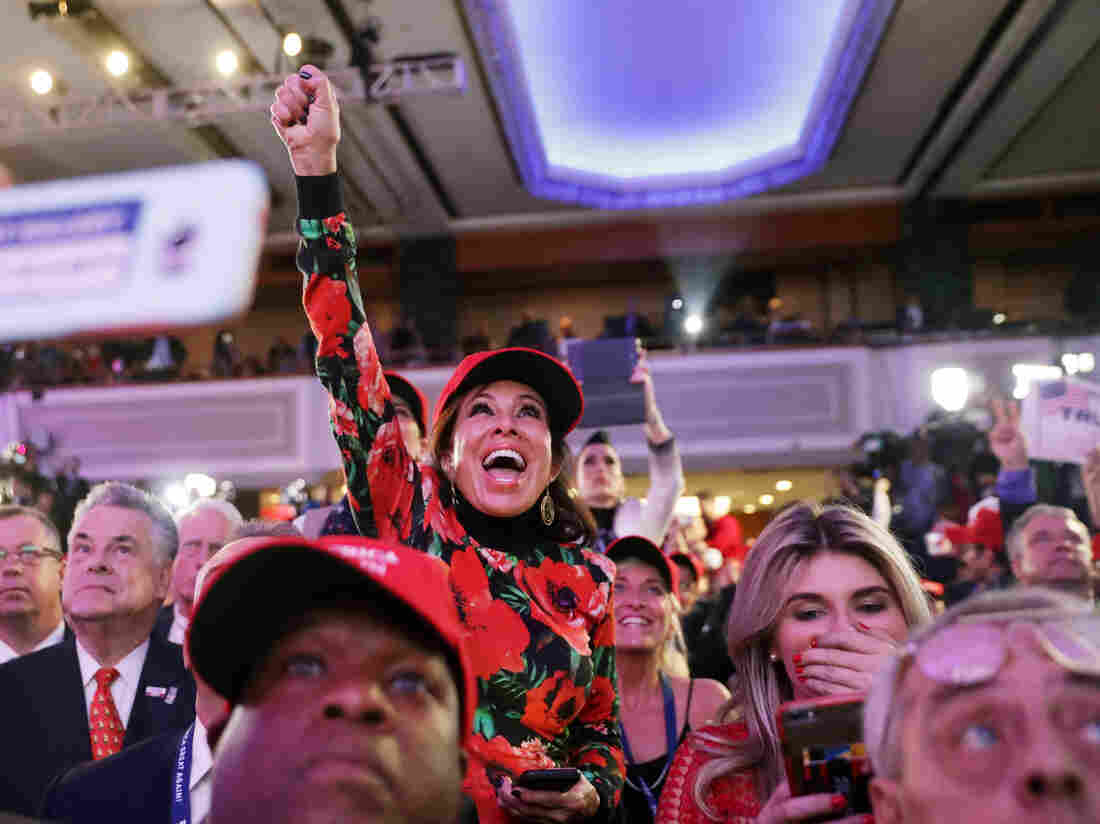 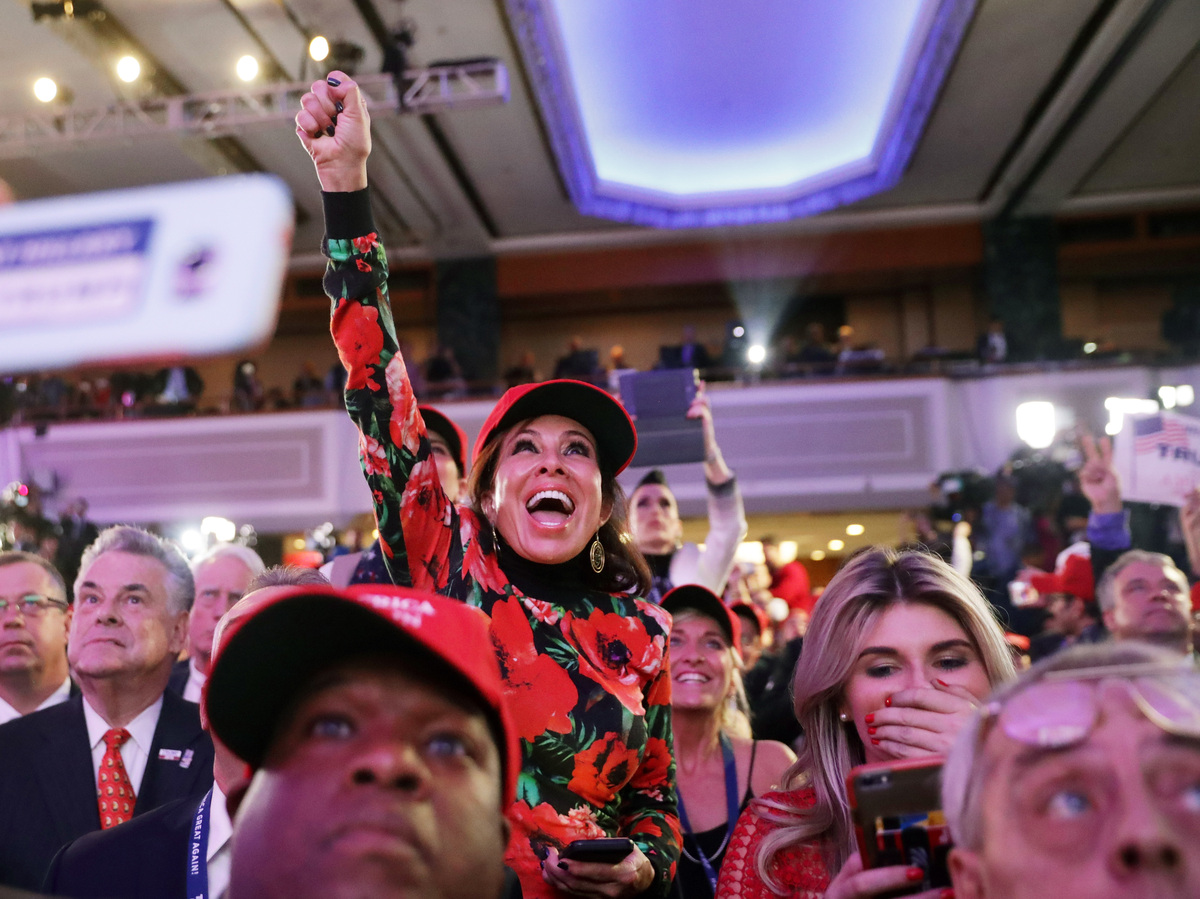 The dust is starting to settle in Washington and around the country after an election that stunned political watchers and pollsters.

1. Hillary Clinton now has a wider popular vote lead than Al Gore in 2000, but the Electoral College picks presidents.

As vote continues to be counted, Hillary Clinton has now surpassed Al Gore's 2000 popular vote margin. Clinton's popular-vote lead is 668,171 over President-elect Donald Trump, according to the latest totals compiled by the U.S. Election Atlas. Gore got 547,398 more votes than George W. Bush in 2000.

Clinton's lead will only likely grow as votes continue to be finalized. Democrats have now won the popular vote in six of the last seven presidential elections, but lost the Electoral College in two of them. This takes place as Democrats continue to migrate to cities and the coasts and where their population is now more concentrated.

The constitution mandates the Electoral College picks presidents. The founders created that system in part to avoid the largest states picking "favorite sons" and having outsize influence.

Turnout may even surpass 2012 when all the vote is counted. These figures represent only about half of all eligible voters in the U.S. But, as explained below, Clinton earned a lower share than Obama and more voters chose third-party candidates. 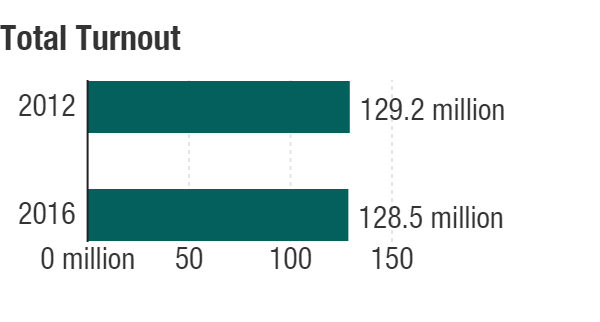 3. A significant chunk of voters were dissatisfied with their choice of candidates.

The number of people electing not to vote for the Republican or Democratic nominee went up by 4.5 million votes, nearly tripling from 2012. 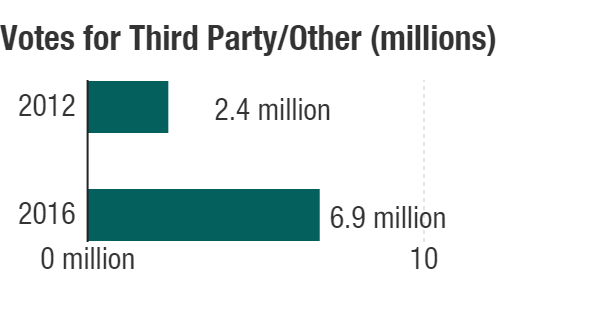 Votes for third party or candidates outside the major parties in 2012 vs. 2016. Domenico Montanaro/NPR hide caption

It's difficult to say precisely which of the two major-party candidates these voters would have leaned towards. Libertarian Gary Johnson got more than 4 million votes (or 3 percent), up from 1.3 million in 2012. Green Party candidate Jill Stein got 1.3 million votes in this election, only about 1 percent overall.

4. Clinton did not fire up the Obama Coalition. 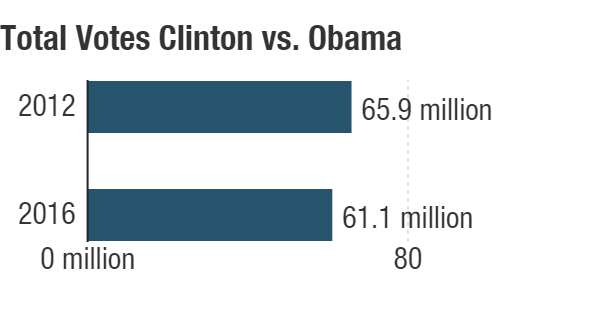 Trump, meanwhile, got roughly the same number of voters as Mitt Romney four years ago: 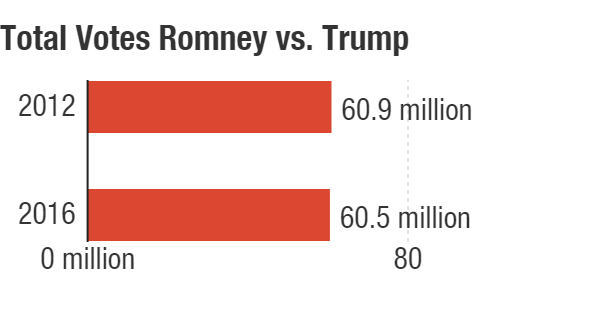 18-29-YEAR-OLDS
Young voters were the same share of the electorate (19 percent), but went in smaller margins for Clinton than Obama and they jumped in third-party support from 3 percent to 8 percent:

LATINOS
By their sheer size, Latinos went up as a share of the electorate from 10 percent to 11 percent, but the idea that they would turn out for Clinton in bigger numbers than for Obama because of Trump turned out just not be true overall — and a significant share, especially among Latinos, went third-party:

Latinos certainly had an impact in the Southwest, helping Clinton win Nevada and Colorado and even made Arizona and Texas closer than past years. Texas was within 10 points for the first time in 20 years, and Latinos were a quarter of the electorate (24 percent).

It might be becoming clear that about 3 in 10 Latinos are simply part of the conservative base.

BLACK VOTERS
Black voters were down as a share of the electorate slightly and went for Clinton in a smaller margin — more like 2004 numbers for John Kerry:

In places like Wayne County, Mich., home to Detroit, and Milwaukee, Wis., Clinton was significantly off from Obama's vote total in 2012. In fact, had she met Obama's vote total, it would have made been more than enough to make up the statewide differences in both states:

A similar pattern wouldn't have helped Clinton win Pennsylvania. She turned out about 25,000 fewer voters in Philadelphia than Obama, but that discrepancy would not have made up for the crumbling in rural areas and even some counties Obama won. Luzerne (Wilkes-Barre), for example, shifted huge to Trump — by 25 points. Erie shifted 18 points.

Could they have made up the difference? Quite possibly. Trump won the state by 177,000 votes out of about 4.7 million votes. If black voters were the same share of the electorate as 2012, and Clinton won 90 percent, she would have picked up some 126,000 votes. Now, if they voted in the 96-percent, same margin as they did for Obama and turned out at the same share of the electorate, Clinton would have picked up 191,000 votes.

Now almost no one expected, including the Clinton campaign, to get the same margins and share of the electorate with black voters as Obama, so these calculations probably aren't fair. What's more, Trump increased turnout among Republicans, so the black share would have to drop even if the same raw number turned out as 2016.

Sure, mathematically, no slippage with black voters, no third-party bleed among young voters in particular and juicing the Latino vote would have meant Clinton could have won despite a white, working-class cratering (more on that below). But that's not realistic, considering the election didn't take place in a vacuum. The declines are interrelated.

POST GRADUATES
Post-graduates went by a slightly wider margin for Clinton than Obama:

This furthers the distinct education gap in this election, especially among whites.

5. Whites without college degrees have fled to the GOP.

They were a group Democrats used to compete with. In 1992 and 1996, Bill Clinton won them by a point. But they have fled to the GOP in the years since –- and now the gap between whites with college degrees and without appears to be the widest ever. A whopping 35 points.

6. And that leads to what might be the biggest story of the election — Democrats' cratering with blue-collar white voters.

Ohio and Iowa went by huge margins for Trump –- almost 10 points in Iowa and 9 in Ohio. Trump won Wisconsin and Pennsylvania (by less than a point), leads in Michigan (by an even smaller margin), and lost by less than 2 points in Minnesota.

Those last three states went for Democrats in six straight presidential elections. They were crucial to the Democratic Blue Wall, and Trump took a sledgehammer to it.

We heard the voices of Obama-Trump white, working class voters in our stories online and on the air, but they never registered in big enough numbers — in public or private, non-partisan, Republican or Democratic polling before the election to show that a Trump win was apparent. Take a look at the vote shifts among the white, working class in some key states: 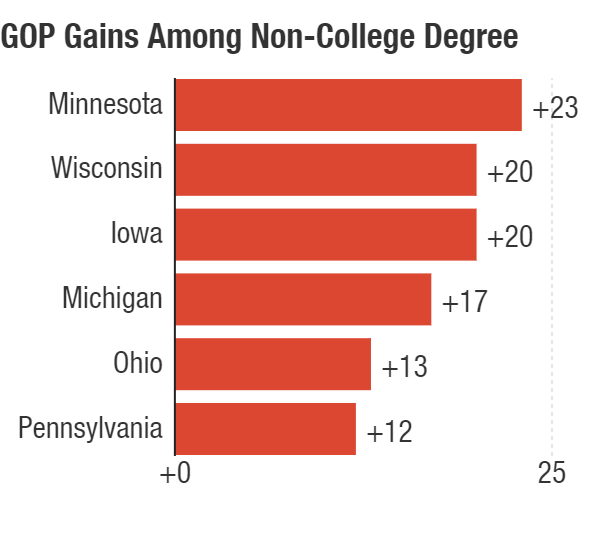 THOSE WITHOUT A COLLEGE DEGREE IN INDUSTRIAL NORTH

Overall, the reason Trump won was because he flipped big margins with white, working class voters in the Midwest and Pennsylvania — something that was always a possibility.

Trump spoke to these voters — whether it was on policy with how he blew up the Republican message on trade and Clinton's ties to the establishment and pro-globalist agenda; or his fueling white resentments and racial bias; and there was likely some degree of sexism that played a role. That's something that's difficult to measure, though there will likely be dissertations written about it.

But Clinton made her mistakes with this group — calling half of Trump supporters "deplorables" likely fired up these exact kinds of voters, for example.

The late-in-the-campaign letter from FBI Director James Comey about Clinton's emails likely also played a role, reinforcing a narrative about her as untrustworthy especially with voters who were prone to believe the worst about her.

In the end, though, Clinton allowed the caricature created of her to become cemented. It's actually surprising considering how she campaigned for her 2000 Senate seat. Back then, she took on the caricatures of her as a carpetbagger who didn't deserve it by meeting and talking with voters in upstate New York. Some questioned that strategy given New York City and the suburbs have such big populations and generally determine the outcome of statewide races. (Sound familiar?)

Clinton, though, worked hard and won many of them over — and easily won the Senate seat.

She never did that this time. It was something she promised she would do at the outset of this campaign, but it was never attempted during the general election when she was against Trump. Instead, she was largely absent from the campaign trail for most of August, staying out of the news, as Trump was steeped in controversy. That turned out to be a mistake.

She never created an affirmative message about her candidacy. "Stronger Together" was reactive to Trump. And she took for granted what used to be a critical piece of the Democratic coalition. It's ironic that instead of courting these voters to solidify the Blue Wall, she spent a lot of time courting Republicans. But the Republicans who would be open to her message would be metropolitan globalists, and it's the very type of message that appeals to them that would turn off populist, blue-collar Democrats.

A rural Pennsylvania, Michigan or Wisconsin tour might not have reversed this 36-year trend away from Democrats, but given how extraordinarily close all three states turned out to be, Clinton likely would have reduced the margins enough to win.

Of course, that's not what happened.

A previous version of this story may have implied that Iowa and Ohio were among the states that voted Democratic in six straight presidential elections.