Accessibility links
'Prince Of Cats' Melds Comics, Hip-Hop And Shakespeare Ron Wimberly's energetic re-working of Romeo and Juliet focuses on Tybalt, the "Prince of Cats." It mashes up wildly diverse elements into a fresh creation, the visual equivalent of a DJ's mix. 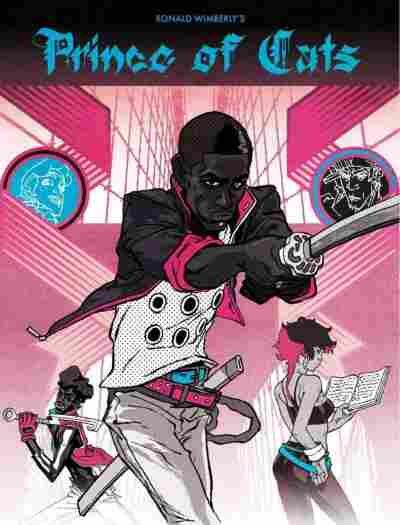 Editor's note: We identified Slave Punk and Sunset Park as already published; they were announced in 2015 but are not yet out.

Nonstop, jittery energy seems to rattle every panel of Prince of Cats, Ronald Wimberly's Shakespearean street tale. Few artists can strike the kind of sparks that electrify these pages, and yet Wimberly's powerful draftsmanship is only one aspect of a head-to-toe remarkable book. Focusing on Tybalt, the "Prince of Cats" in Romeo and Juliet, Wimberly conjures a distinctive vision of the early '80s in the inner city. First published in 2012 by DC/Vertigo, Prince of Cats went out of print and has been more-or-less unavailable ever since. Now Image Comics is releasing it in hardcover.

Wimberley, whose other Image projects include Slave Punk and Sunset Park — unabashedly demands recognition with this nervy work. Prince of Cats is packed with allusions: to Greek myth and Japanese folklore, The Warriors and Rosencrantz and Guildenstern are Dead, video games and action movies and the '80s art scene. Of course, the most significant of Wimberly's grab bag of references is the Bard himself. Wimberly's characters all speak in a mix of high-flown poetry and gritty, down-to-earth images — just as Shakespeare's characters did. Here, Juliet describes the scene from atop a Coney Island Ferris wheel:

Wimberly is out to do something more than just combine elements from two compatible genres. He's clearly aiming to translate the mechanics of hip hop composition into a visual form.

Wimberly is hardly the first to make a connection between comics and hip hop culture. In the 1980s, both Marvel and DC Comics incorporated rapping characters into some of their books. In the early '90s, Marvel published books about KRS-One and Onyx and a nine-issue series starring Kid 'n Play. Other artists who've appeared in comics include Public Enemy, Wu-Tang Clan, Eminem and Run-DMC's Darryl McDaniels — the latter of whom launched his own comics company in 2014. Ed Piskor's series Hip Hop Family Tree has already become a classic. And in October Marvel issued a hardcover collection of more than 70 hip hop-themed covers by such artists as Adam Hughes, Tim Bradstreet and Brian Stelfreeze.

But Wimberly is out to do something more than just combine elements from two compatible genres. He's clearly aiming to translate the mechanics of hip hop composition into a visual form. In Prince of Cats' introduction, University of California media professor John Jennings calls Wimberly a "See-Jay:" Wielding his pen the way a DJ mixes, he mashes up wildly diverse elements into a fresh creation.

Wimberly's rhymes tend to have a rough, jazzy rhythm that offsets their formality. Commenting on his friends' fighting abilities, one character says:

Top form, yet Romeo delivered his fall. And

while you starched and pressed your school uniform,

Wimberly's perhaps at his cleverest when he repurposes Shakespeare's original lines to fit an African American context. "What, dost thou make us minstrels?" one character demands angrily. "And thou make minstrels of us, look to hear nothing but discords."

His method has its successes and failures, but the sheer fun of his concept — and that vigorous, sparky artwork — make the latter mostly insignificant. As in Shakespeare, the poetry sometimes obscures what's going on. The narrative doesn't have a lot of pull; even when the characters duel bloodily with samurai swords (That's the kind of world this is: The homeboys fight with Japanese weaponry) there isn't a sense of urgency. At least, not until the grim conclusion.

But much of Wimberly's tale is purely delightful — as with one character's paean to an ice-cream truck:

And calls forth God's wandering children

To the chariot of Mr. Soft-e.

Not many comic artists have as much fun with words as they do with lines. But Wimberly clearly relishes the opportunity to stretch in different directions at once. The heart of Prince of Cats might well be a single, short sentence midway through the book. A graffiti artist is surveying his latest rooftop creation, a tag of dazzling complexity, the ultimate melding of image and sign. "See," he remarks, "a man caught in words can live forever."