We begin this hour with some news from the incoming administration. President-elect Donald Trump is starting to put the pieces into place. This afternoon, Trump announced that his White House team will be led by Steve Bannon, the former head of Breitbart News who worked as his campaign CEO, and Republican National Committee Chairman Reince Priebus, who will serve as White House chief of staff.

NPR lead political editor Domenico Montanaro is on the line with us now to tell us more. Domenico, hi. Thanks for joining us.

DOMENICO MONTANARO, BYLINE: Hi there. Thanks for having me.

MARTIN: So Reince Priebus will be White House chief of staff, but Trump also said that Steve Bannon will be his chief strategist, saying it will be an equal partnership. Can you tell us any more about this arrangement?

MONTANARO: Well, it's kind of similar to how the campaign went down, aside from bringing Priebus in to now sort of run the trains. You know, make the trains run on time and the day-to-day stuff. I see it as a governing pick. You know, this is - that - this is President-elect Trump now saying that he's going to try to work with the Republican establishment. I mean, think about Paul Ryan and his relationship with Reince Priebus. They're very close, both from Wisconsin. And this will - this at least shows that Trump is going to try to work with this current Republican leadership and see if they can get some things done.

Of course, Bannon will still sort of be, you know, chief inspiration (laughter) at the White House. And that could mean that if things go wrong - you know, Bannon is no fan of the Republican leadership in Paul Ryan or Mitch McConnell, that he'll have sort of the - you know, the macho back for Donald Trump in order to fight back, if need be.

MARTIN: Well, let's talk a little bit more, though, about Steve Bannon. He came into the campaign late but seemed to have a very large effect. Many people attribute the conspiracy theories that were pushed - about Hillary Clinton's health, for example, which were also fanned on the Breitbart website that Bannon led. Can you talk a little bit more about him?

MONTANARO: Yeah. Unquestionably, he's a take-no-prisoners operative. You know, a former Hollywood producer, a Goldman Sachs managing director as well. He ran the website Breitbart, as you said, which has, you know, become kind of synonymous with the alt-right and certainly, like I said, no fan of the establishment Republicans. And establishment Republicans are no fan of them, so they're going to have to figure out a way to get along.

MARTIN: Well, what about that - again, as you mentioned earlier, and as I think many people who follow this certainly know, that Donald Trump certainly had tensions with the Republican Party. What about his relationship with Reince Priebus?

MONTANARO: Yeah. I mean, I think that between Priebus and Bannon, you know, they've had a bit of a detente. I mean, Priebus was - it was important for Priebus to be behind the Trump campaign so that the RNC staff could supplement much of what the campaign was able to do. And frankly, Trump and Bannon owe a lot to Priebus and the RNC organization.

You know, the RNC put out an internal email that just went out to staff and - you know, from Katie Walsh, who's the chief of staff there, congratulating the staff, saying that this is in part a big reflection of what the RNC has done, but also reflects the fact that Republicans now will control more levers of government than at any time since the 1920s - White House, Senate, House, governorships, state legislative bodies. So the point there being they want to get some stuff done, and they feel like they can get a Republican-slash-conservative agenda through given those big majorities.

MARTIN: We only have about half a minute left. So overall, what message do you think these appointments are meant to send?

MONTANARO: Yeah. I think immediately, the message is that Trump wants to get to work. He wants to get someone put in place like Reince Priebus who can have an - have a relationship immediately with people on Capitol Hill as long as - as well as with Mike Pence. And he will maintain counsel and advice from Steve Bannon, but the day-to-day operations are going to be with Reince Priebus and trying to get some conservative agenda items through.

MONTANARO: Oh, you're welcome as always. 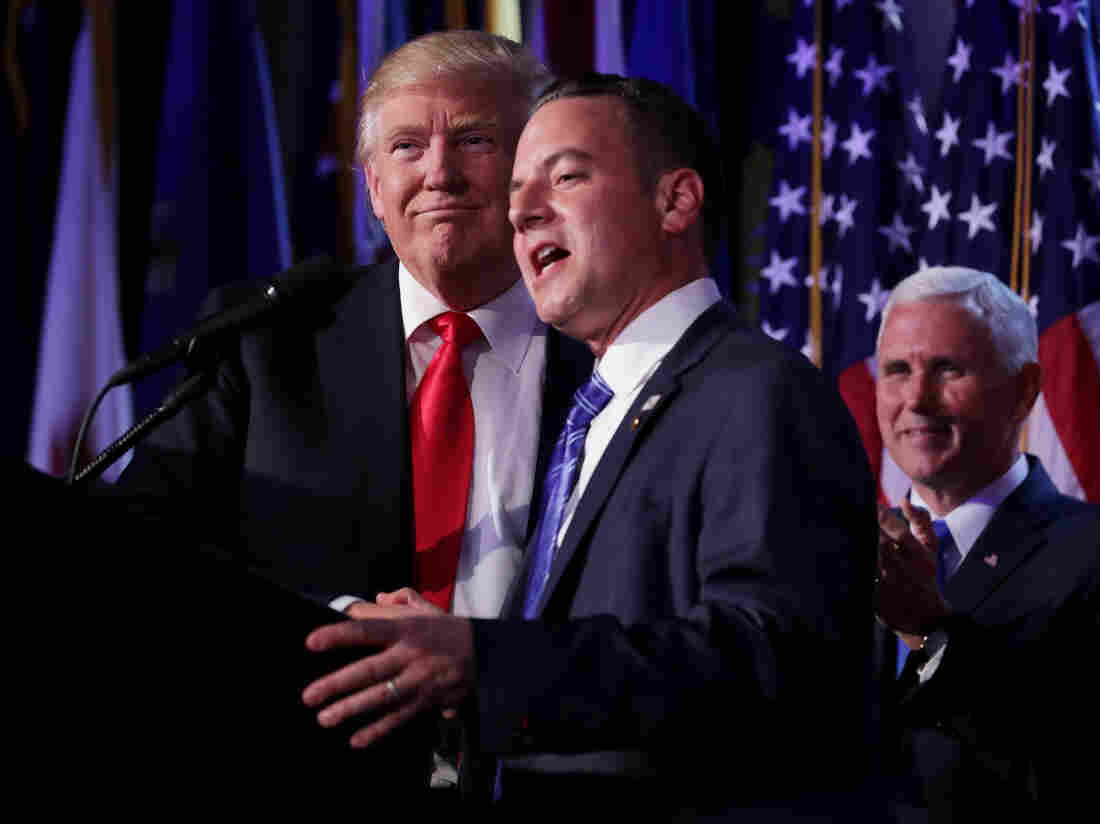 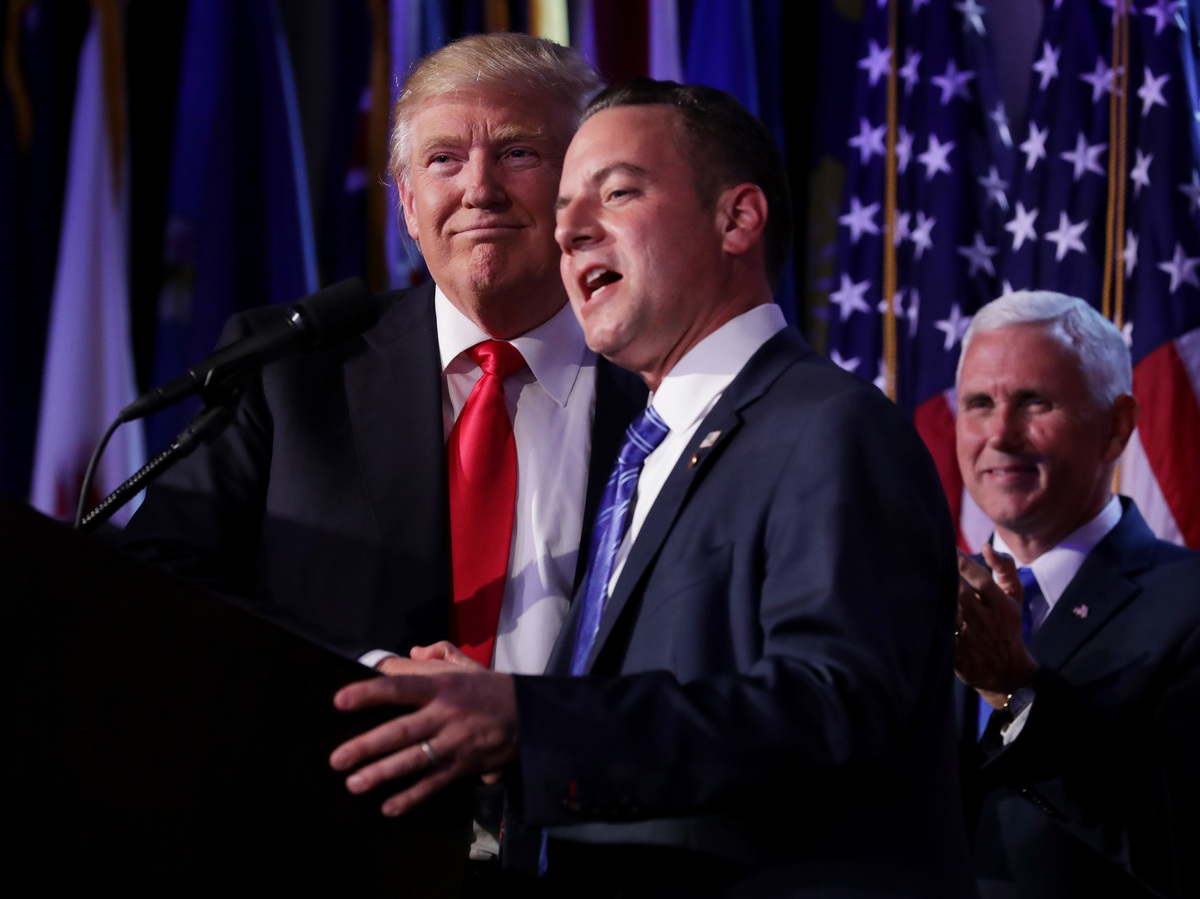 Less than a week after his election, Donald Trump has begun to fill out the team he plans to bring with him to the White House. The president-elect announced Sunday that he has selected Republican National Committee Chairman Reince Priebus to serve as chief of staff in his incoming administration.

In the same announcement, Priebus' appointment shared top billing with the news that Trump campaign CEO Stephen K. Bannon will serve as chief strategist and senior counselor to the president. 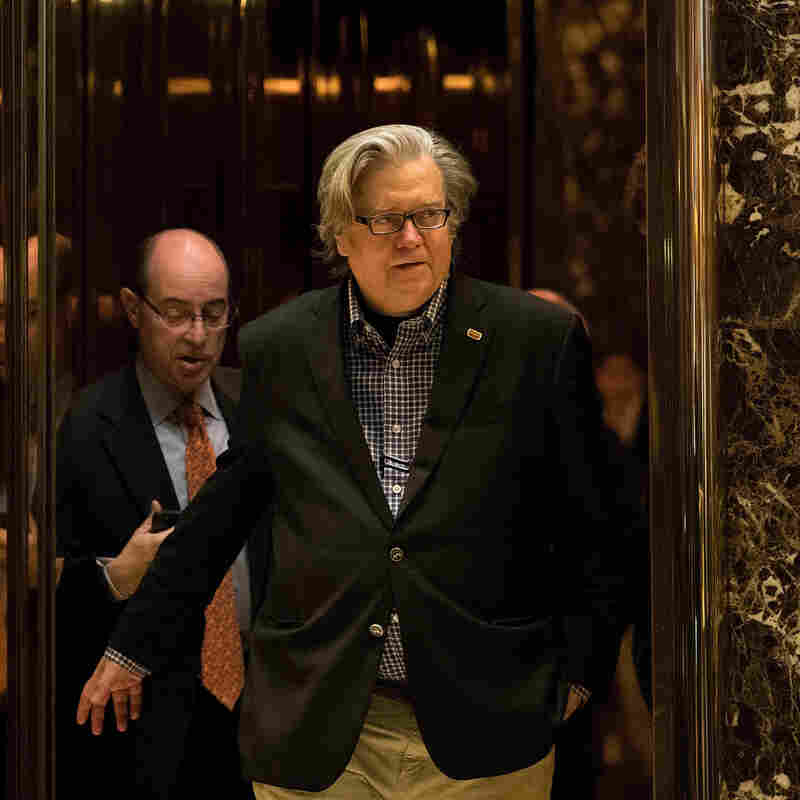 Steve Bannon exits an elevator in the lobby of Trump Tower on Friday. He has been newly named the chief strategist of the Trump White House. Drew Angerer/Getty Images hide caption 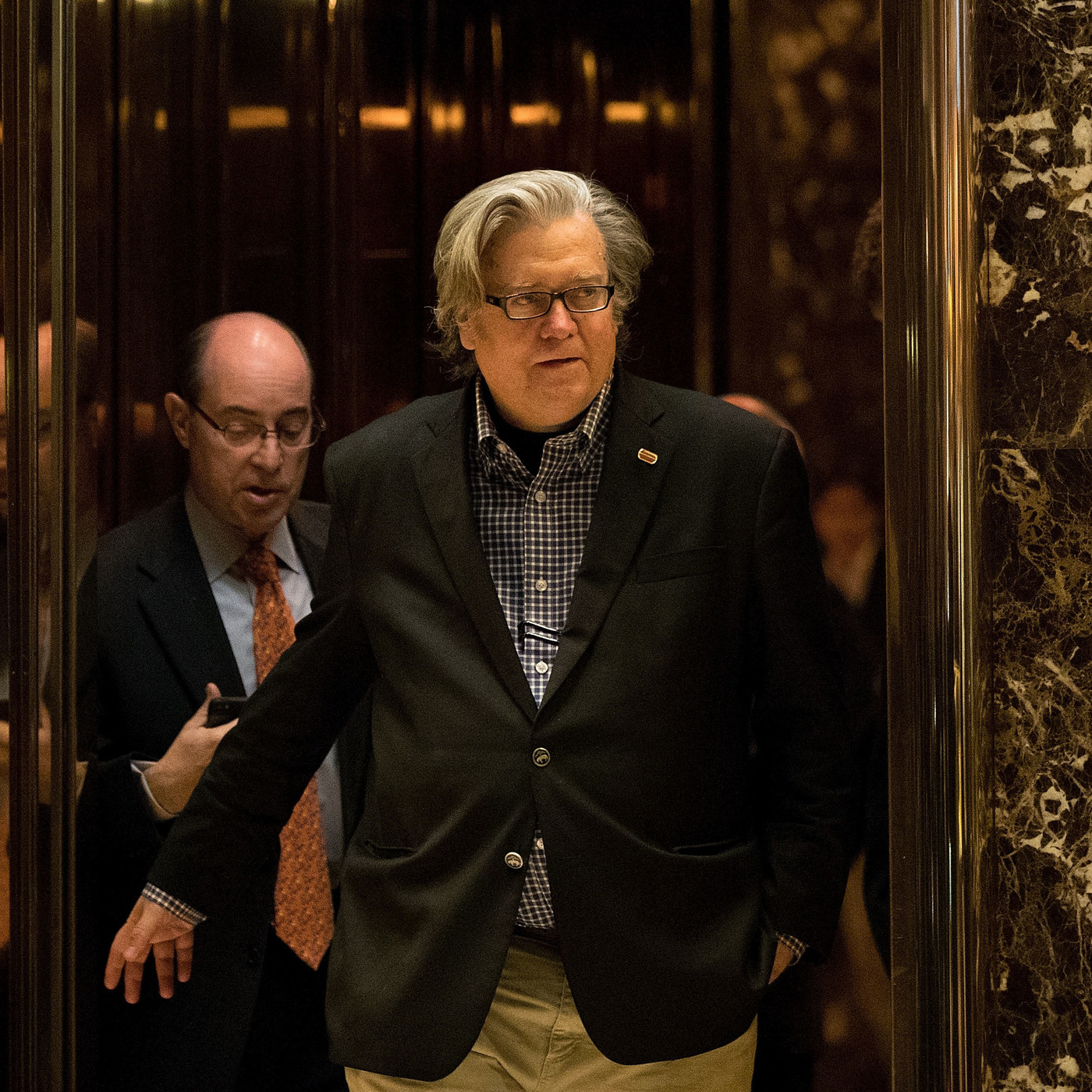 Steve Bannon exits an elevator in the lobby of Trump Tower on Friday. He has been newly named the chief strategist of the Trump White House.

"I am thrilled to have my very successful team continue with me in leading our country," said Trump said in the emailed statement. "Steve and Reince are highly qualified leaders who worked well together on our campaign and led us to a historic victory. Now I will have them both with me in the White House as we work to make America great again."

The dual selections are likely to send two separate signals to those closely watching Trump's transition into power.

The choice of Priebus, who has served as party chairman since 2011, suggests conciliation toward the establishment Republicans with whom Trump has often shared a strained relationship. A veteran GOP operative, Priebus is well accustomed to the capital's corridors of power. As NPR's Eyder Peralta reports for our NewsCast unit, "In Priebus, Trump finds a Washington insider" — and one who stayed loyal to Trump during a frequently rocky campaign.

"I am very grateful to the President-elect for this opportunity to serve him and this nation as we work to create an economy that works for everyone, secure our borders, repeal and replace Obamacare and destroy radical Islamic terrorism," Priebus said in the statement.

Meanwhile, the inclusion of Bannon, the former head of the far-right outlet Breitbart News, suggests another direction entirely. Rumored to be have been considered for chief of staff himself, Bannon "would have been the insurgent choice" for the top aide job, Eyder says. He is "known for his no-holds-barred approach to politics and his popularity among the alt-right," as NPR's Sarah McCammon reported last week.

NPR political editor Domenico Montanaro has more on the man who helped steer Trump's campaign during its final months:

"Unquestionably, [Bannon] is a take-no-prisoners operative. A former Hollywood producer, a Goldman Sachs managing director, as well, he ran the Breitbart website, which has become synonymous with the alt-right. And he's certainly no fan of the establishment Republicans."

The statement did not clarify the distribution of duties between the two men, but said they will work "as equal partners to transform the federal government."