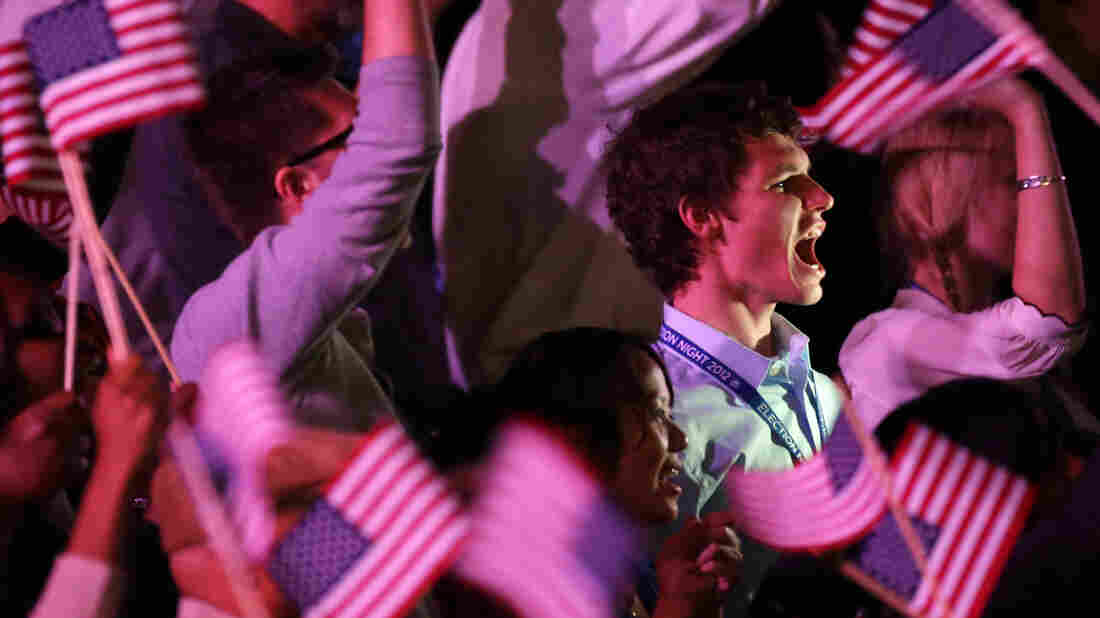 Young supporters cheer as they wait for President Obama at his election night party in 2012 in Chicago. Pablo Martinez Monsivais/AP hide caption 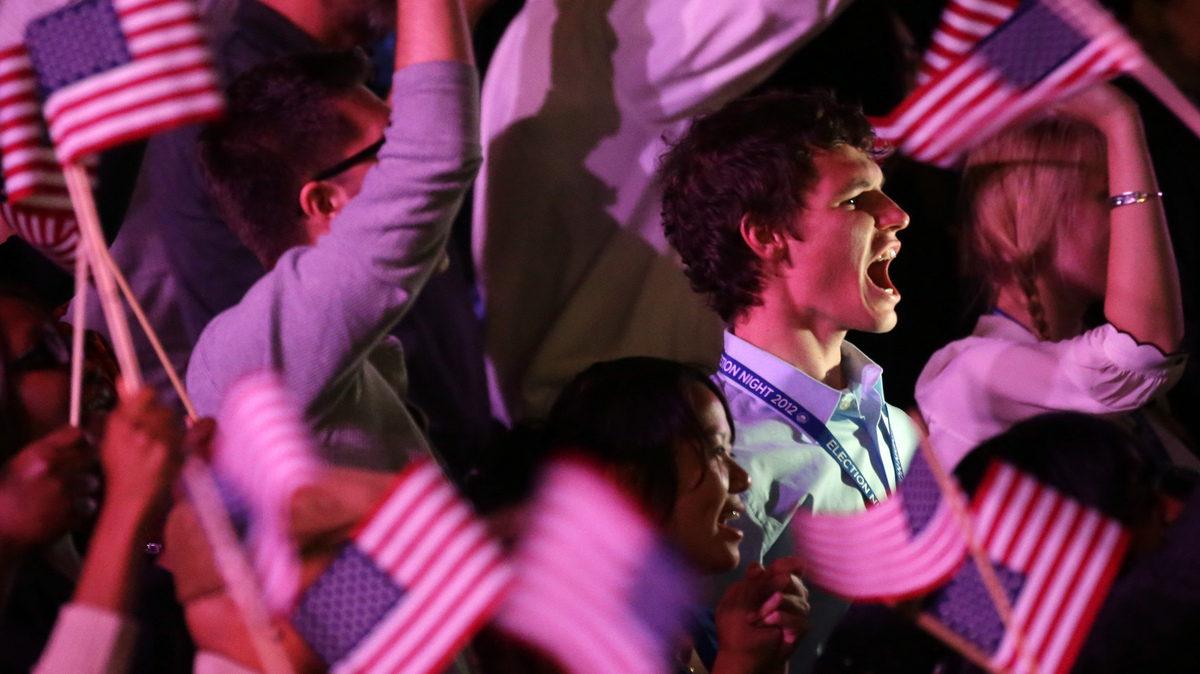 Young supporters cheer as they wait for President Obama at his election night party in 2012 in Chicago.

Millennials might have been Hillary Clinton's Achilles' heel on Tuesday night.

Obama won 60 percent of the millennial vote. Clinton got only about 55 percent. (We're using "millennials" as shorthand for voters between the ages of 18 and 29, but some millennials are in their 30s).

But it's not that young voters across the country were necessarily flocking to the Republican Party this year.

The real shift seems to have come from an increase in third-party candidate support, potentially low turnout, and stronger than expected support for Donald Trump in some Midwestern states that Clinton lost.

By itself, that statistic might seem like a good sign for Democrats; but if you compare it with 2012, Clinton underperformed President Obama, particularly in key battleground states.

Nationally, Trump did just as poorly as Mitt Romney did four years ago with millennials — only 37 percent of young voters supported the Republican candidate in 2012 and 2016.

After 4 Decades Of Breaking Molds, Clinton Failed To Shatter The Ultimate Ceiling

We'll have a better sense of turnout among young voters when we see the percentage of 18- to 29-year-olds who voted, according to the self-reported census numbers next year, but exit polls indicate turnout was a problem in key states.

I just never got around to registering. ... And I didn't like either candidate. I should have upheld my civic my duty, but I didn't. Kind of regret it now.

In fact, in every key swing state, according to exit polls, Clinton did worse than Obama with young voters. Now, of course, there's a margin of error, especially when you drill down to state-specific data, but the overall trend is clear.

For example, in 2016, 26 percent of Arizona voters were millennials; on Tuesday, voters ages 18-29 were just 14 percent of the state's electorate.

In a number of other key battleground states, such as Wisconsin and Pennsylvania, it looks like millennials didn't show up at the polls in the same levels they did for President Obama, and that was a problem for Democrats.

Perhaps because of that drop in support among young people, Pennsylvania went Republican for the first time in a generation.

Easton Public Market is a new farmers market and food court in Pennsylvania's Lehigh Valley, about 60 miles north of Philadelphia; it's also a go-to spot for millennials.

Obama was an inspiring candidate. ... Whether you're a Republican or a Democrat, he was more inspiring than Hillary. She's obviously more corrupt.

Sarah Ricker, who was working behind the bakery counter, wearing a knit hat and with a piercing under her lip, voted for Hillary Clinton. But she understands why a lot of other millennials didn't.

"I was actually like excited to have a woman be running," said Ricker. "I just wish it wasn't her. I wish it was somebody a little bit more convincing, I think. She's experienced, she's smart, she knows what she's frickin' doing. But she just wasn't charming. She didn't have that same charm that Barack Obama has."

Ricker thinks Clinton could have reached out to younger voters by doing more talk shows and maybe laughing at herself a bit more.

Head uphill from downtown Easton and you'll find Lafayette College. A lot of students on this leafy campus voted in the election, but some, like Will Manson, a sophomore from New York, did not vote.

"I just never got around to registering. It was more of a lazy thing," he said. "And I didn't like either candidate. I should have upheld my civic duty, but I didn't. Kind of regret it now."

In some battleground states, that number was much higher. In Arizona, for example, about 11 percent of voters opted for a third-party candidate.

Some of these young voters said Clinton was too hawkish on foreign policy or too cozy with Wall Street. They had supported Sen. Bernie Sanders during the primaries.

That could have hurt Clinton in Pennsylvania, which hasn't gone to a Republican presidential candidate since 1988.

Northampton County, home to Easton, flipped from blue to red as well. Downtown Easton has its share of new restaurants and an upscale market. But some storefronts are empty. The busiest shop seems to be the dollar store.

And out there, it's not hard to find millennials who support Trump.

"I don't think people are stupid anymore. Sometimes you open your eyes," said Brian Aulisio, who was waiting for a haircut at a barbershop. Aulisio voted for Obama twice, but this year, he says, he voted Republican for the first time in his life.

"Obama was an inspiring candidate, he inspired people. Whether you're a Republican or a Democrat, he was more inspiring than Hillary. She's obviously more corrupt."

Ronald Corales, the owner of the barbershop, echoed that sentiment. Corales is a second-generation American who says his father came to the country illegally in the 1980s. He knows about Trump's promise to build a wall on the southern border. But that didn't stop him from voting for Trump.

"Everybody woke up," he said. "The whole email scandal I just think was a really big thing for me. Trump is not my favorite candidate. But I'll take him over Hillary."

In Pennsylvania, as in Iowa, Wisconsin and Ohio, Trump seems to have done marginally better with younger voters than Romney did.

He didn't do incredibly well with the group. But he did well enough to carry Pennsylvania by fewer than 70,000 votes.

And well enough to win Wisconsin by about 27,000 votes.