Accessibility links
Washington High Court Hears Case Of Florist Who Refused To Serve Gay Wedding A florist refused to do the wedding arrangements for a same-sex couple, claiming it's against her religion. The couple and the state argue that's unlawful discrimination. 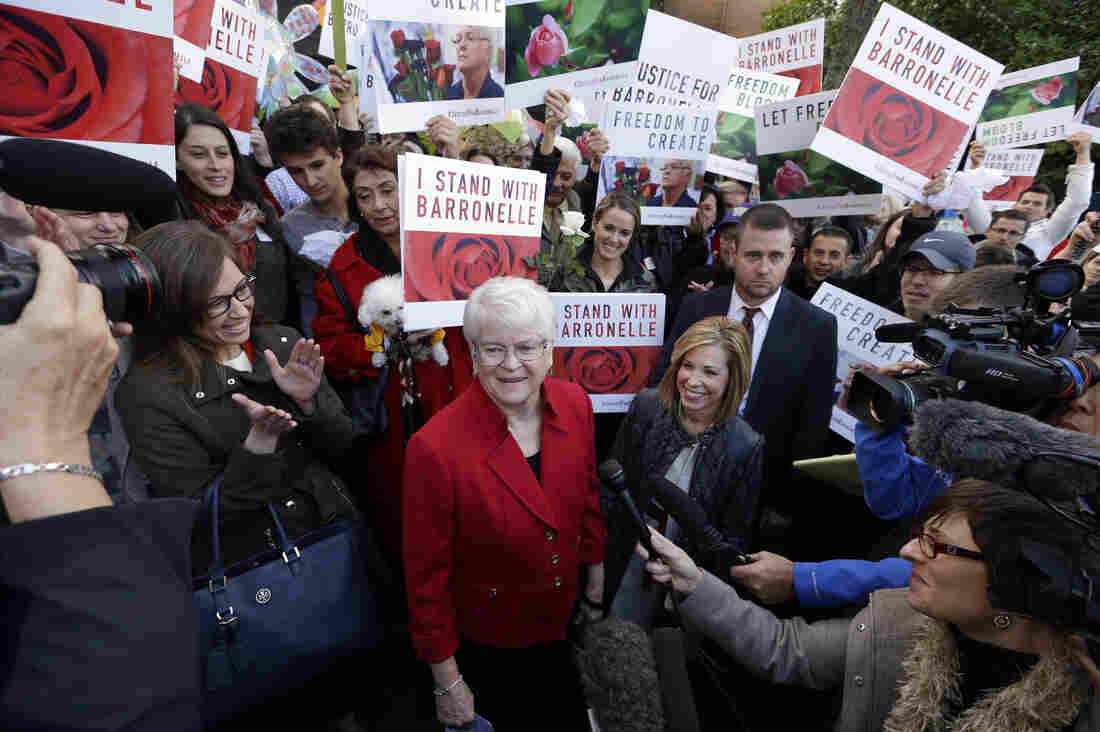 Barronelle Stutzman, center, a Richland, Wash., florist who was fined for denying service to a gay couple in 2013, is surrounded by supporters after a hearing before Washington's Supreme Court, on Tuesday, in Bellevue, Wash. Elaine Thompson/AP hide caption 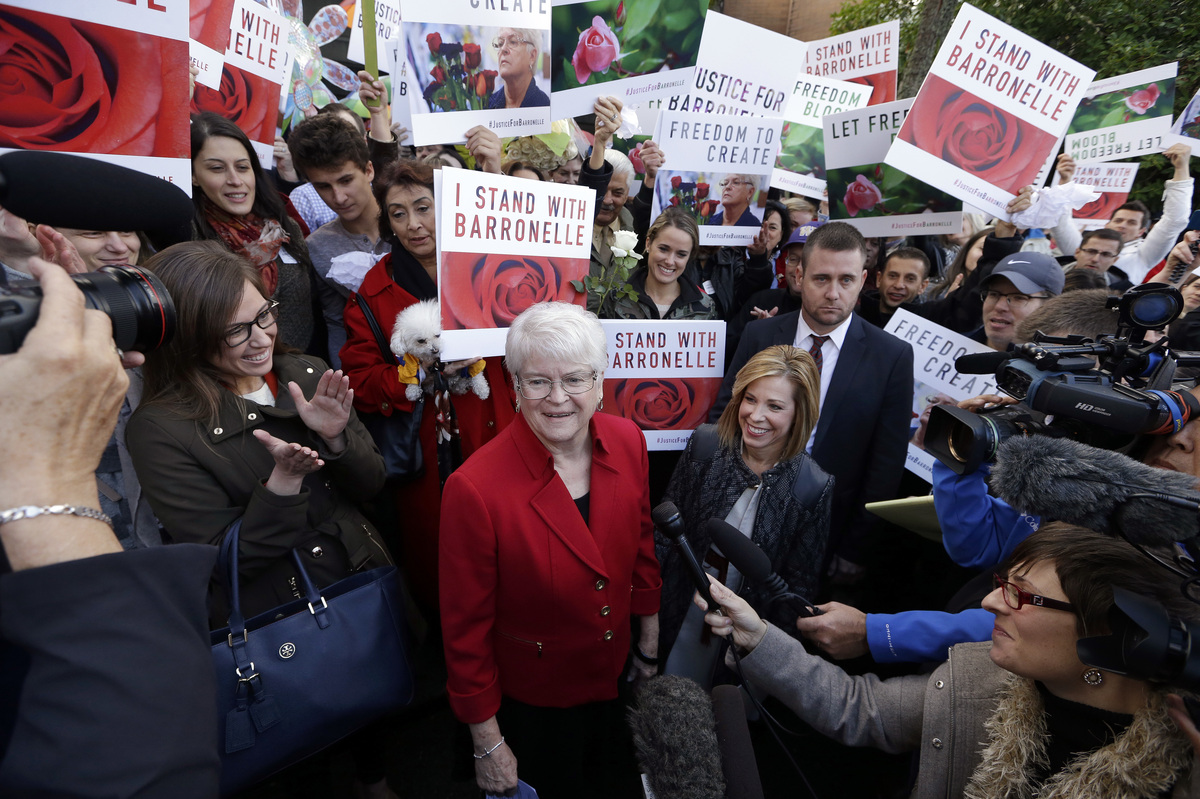 Barronelle Stutzman, center, a Richland, Wash., florist who was fined for denying service to a gay couple in 2013, is surrounded by supporters after a hearing before Washington's Supreme Court, on Tuesday, in Bellevue, Wash.

Back in 2013, Curt Freed and Robert Ingersoll were engaged to be married. Ingersoll remembers it was on a Friday, his birthday, when he asked the couple's long-time florist, Arlene's Flowers, to do arrangements for their upcoming wedding.

"We had gone to Arlene's for many years and enjoyed her service. She did a great job for us. So it was just natural for us to go there and have her do our flowers," Ingersoll says.

So when the shop's owner, Barronelle Stutzman, said no, it took a while for the refusal to sink in. Freed says they told more people that night and over the next few days. Most of their friends were shocked. 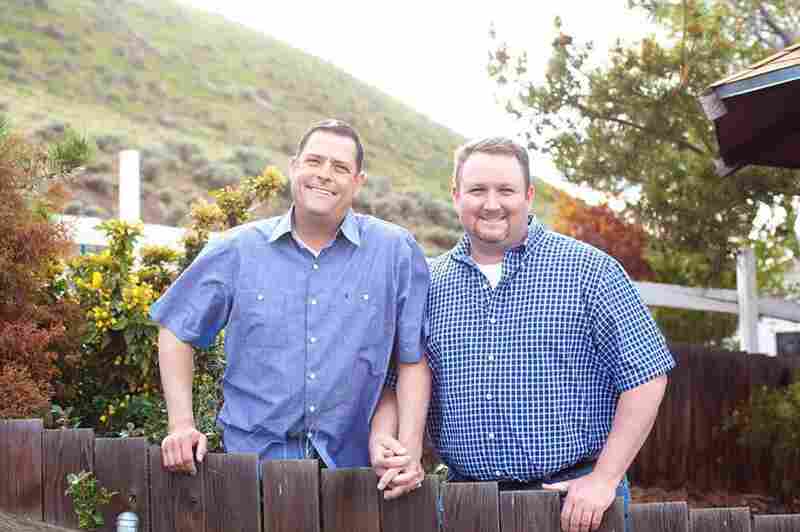 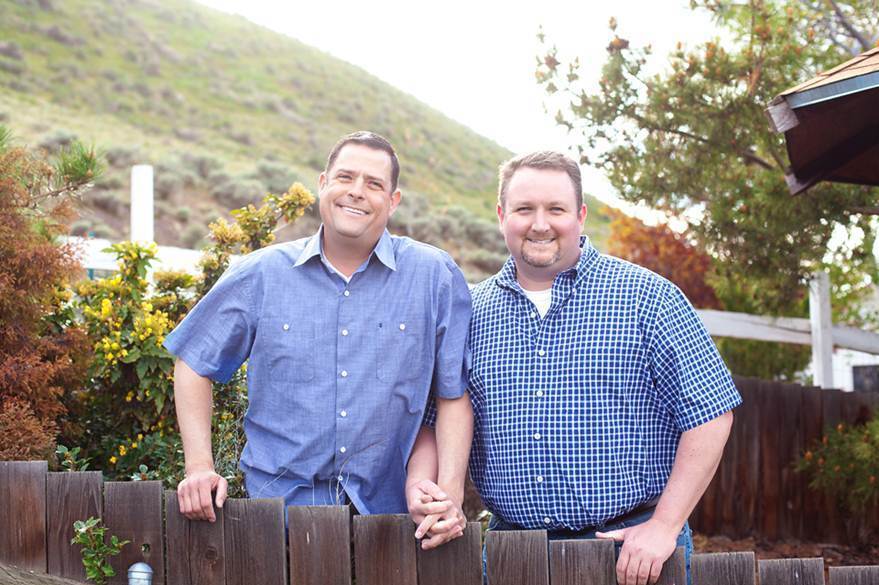 Robert Ingersoll (left) and Curt Freed sued a Washington state floral shop that refused to sell flowers for their wedding.

"It feels incredibly marginalized to have essentially been turned away for who we are and who we love," Freed says.

"All Americans should be free to peacefully live and operate consistent with their convictions without threat of government punishment," says Kerri Kupec, one of Stutzman's lawyers from the Arizona-based group Alliance Defending Freedom. She argues Stutzman is an artist and creating an arrangement specifically for a gay couple's wedding is against the florist's religious beliefs.

No Cake For You: Saying 'I Don't' To Same-Sex Marriage

"Under this kind of rationale that's happening in Washington state, a gay singer could be forced by the government to perform at a religious conference that is promoting marriage as a man-woman union," she says.

In addition to the couple's case against Arlene's Flowers, Bob Ferguson, Washington state's attorney general, is also bringing a broader anti-discrimination case against the florist. It's being heard at the same time as the couple's case. Ferguson says that in 2006, the state expanded its anti-discrimination law. That made turning away customers based on sexual-orientation unlawful — just like it's unlawful to turn away customers based on gender, religion or race.

"I'm Catholic, for example. If I go to a restaurant to celebrate the first communion of my young twins with my wife, the restaurant owner shouldn't be able to say, 'I'm sorry, Bob, we do not serve Catholics,' " he says.

Back in 2014, the U.S. Supreme Court declined to hear a similar case involving a New Mexico wedding photographer. There, the state Supreme Court ruled it was against the law for a photographer to refuse to document a same-sex commitment ceremony.

Freed and Ingersoll know they could have gone elsewhere for their wedding flowers, but Ingersoll says they wanted to bring this lawsuit to fight discrimination.

Freed and Ingersoll did marry in 2013 without the help of Arlene's Flowers. The florist is still in business, just not doing any weddings.