Accessibility links
Review: 'The Platinum Age Of Television' By David Bianculli Longtime Fresh Air TV critic David Bianculli's new book lays out what he calls the "Key Evolutionary Stages" in the development of the medium — and the constant conversation we're having with it.

'Platinum Age' Is An Engaging Guide To Great TV

'Platinum Age' Is An Engaging Guide To Great TV 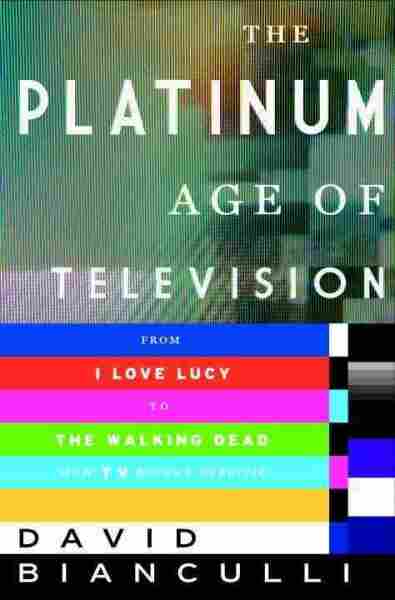 The Platinum Age of Television

From I Love Lucy to The Walking Dead, How TV Became Terrific

Title
The Platinum Age of Television
Subtitle
From I Love Lucy to The Walking Dead, How TV Became Terrific
Author
David Bianculli

As the longtime television critic for NPR's Fresh Air, the founder of TVWorthWatching.com, and a professor of TV and film, David Bianculli has spent decades waxing passionately about his favorite entertainment medium. But his new book, The Platinum Age of Television, does more than simply reaffirm that passion. Laid out encyclopedically and ranging from the 1950s through today, his account of TV's evolution is as dizzying in scope as it is intimate in detail — and it highlights television's undying appeal against a broader backdrop of culture and history.

While covering the gloriously messy development of the medium, Platinum Age is neatly structured. Bianculli defines the Platinum Age of TV as beginning in 1999 with the debuts of The West Wing and The Sopranos, two shows that radically reimagined what television could say and do. Not that the book sticks strictly to the last couple decades; Bianculli combines overviews of a number of genres (soap operas, crime, single working women, sci-fi/fantasy/horror, and so on) with interviews with high-profile creators such as Mel Brooks, Carol Burnett, Norman Lear, Vince Gilligan, unraveling a story that stretch all the way back to TV's advent.

As huge as the book is — and it's a whopper — it's not meant to be an exhaustive encyclopedia. Instead, Bianculli conscientiously curates five shows in each of his chosen genres that best exemplify what he calls "Key Evolutionary Stages" in the growth of television. Part of the fun is agreeing or disagreeing with what he includes and excludes. But even when he glaringly leaves out, say, Monty Python's Flying Circus or Arrested Development from his Key Evolutionary Stages, he makes space to talk about these programs in the context of others, astutely teasing out the continuum they're spread along.

'Another Great Year For TV': David Bianculli On The Best (And Worst) Of 2015

His omission of the entire genre of reality TV from his mosaic is a little more controversial; an entry starting with Survivor and ending with The Great British Baking Show would have meshed well with the book's thoughtful take on how TV parallels society. At the same time, sticking to scripted shows makes sense, seeing as how Bianculli shines the spotlight on the accomplishments of writers, showrunners, and actors alike.

The Platinum Age is well ordered, but Bianculli still loves to bounce back and forth amid eras and genres, letting his erudition boil over as he connects the dots between Perry Mason and The Good Wife or between The Jack Benny Program and Seinfeld. Television, he illustrates, is having a constant conversation with itself — and we, in turn, are having a conversation with it, especially in our social-media-savvy Platinum Age.

He writes big, but he's also not afraid to get personal. At one point he delves into the first person to talk about how deeply he was effected by a scene from Louis CK's groundbreaking Louie — which Bianculli categorizes as a "splitcom," a hybrid between a family sitcom and a workplace sitcom. Then he splices in an interview with CK to get a breakdown of the fragmentary, tentative creative process that went into the scene, from concept to cinematography.

More than a mere guidebook, this is Bianculli's bible of TV — a wise, engaging celebration of a type of entertainment that's as much of an art form as it is a pastime.

On a far less pleasant note, Bianculli recounts how his university students lately have justifiably begun to voice objections when they're shown clips of The Cosby Show in his class, in light of the overwhelming allegations against the program's creator. Bianculli doesn't flinch; instead, he works this into his analysis of the show, probing the cognitive distance between Cliff Huxtable the nurturing father and Billy Cosby the accused sexual predator, and what that indicates about the power of TV.

In his first book, 1992's Teleliteracy: Taking Television Seriously, Bianculli made a strong argument for the value and relevance of TV at a time when it was still dismissed as "the boob tube" or "the idiot box." TV's come a long way since the early '90s — and since the middle of the 20th century, when censors and a lack of representation temporarily stunted the medium's progress. Through its dozens of whip-smart yet personable entries, The Platinum Age weaves a narrative about how television connects us, not just to each other, but to the culture at large. More than a mere guidebook, this is Bianculli's bible of TV — a wise, engaging celebration of a type of entertainment that's as much of an art form as it is a pastime.