Accessibility links
Beautiful, Horrifying 'Blood Of The Dawn' Gives Voice To Peru's Victims Of Violence Claudia Salazar Jiménez's new novel is short and brutally effective. It's the story of three women from different walks of life, all caught up in the violence that convulsed Peru in the 1980s.

Beautiful, Horrifying 'Blood Of The Dawn' Gives Voice To Peru's Victims Of Violence

Beautiful, Horrifying 'Blood Of The Dawn' Gives Voice To Peru's Victims Of Violence 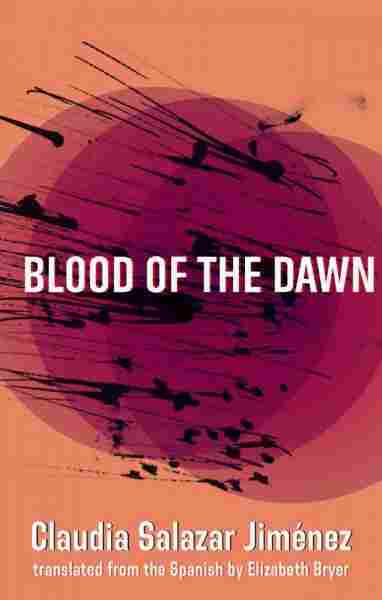 Blood of the Dawn

On April 3, 1983, terrorists associated with the Maoist guerilla group Shining Path invaded the small hamlet of Lucanamarca, Peru, and murdered 69 villagers. The slayings, retaliation for the killing of a Shining Path leader, were especially brutal — the victims, including infants and children, were hacked to death with machetes. It would not be the last time that Peruvians were slaughtered en masse, either by the Shining Path or the Peruvian military.

The Lucanamarca massacre, and the ones that followed it, are the inspiration for Blood of the Dawn, the stunning debut novel from New York-based Peruvian author Claudia Salazar Jiménez. Just ten pages into the book, Salazar Jiménez details the massacre with a long stream-of-consciousness description that's difficult to read: "how many were there it hardly matters twenty came thirty say those who got away counting is useless crack machete blade a divided chest crack no more milk another one falls machete knife dagger stone sling crack ..."

Blood of the Dawn follows three women in 1980s Peru, when the Shining Path was at the height of its influence. There's Melanie, a young news photographer in love with an artist who's moved to France. There's Modesta, a poor smallholder in a tiny village, who loves nothing more than her children. And there's Marcela, a teacher who left her family to join the guerillas, seduced by promises of a revolution that would lift Peruvian peasants out of poverty.

Melanie lives in a big city, but wants nothing more than to document the atrocities occurring in small villages. She chafes at being escorted, longing to see the unfiltered truth, free from government censorship. She eventually gets her wish, but finds herself unprepared for what she witnesses: "Sometimes I'd rather not look, I wish the camera would bear sole witness. The frame will shout what is sooner stifled."

The violence that permeated Peru in the 1980s and 1990s is unspeakable, which is exactly why it needs to be spoken. That's what Salazar Jiménez does in this beautiful, horrifying work of art.

Modesta is mostly content with her lot; she's a devoted mother and wife who's happy with her family and guinea pigs. The land she farms isn't forgiving, but she can't bring herself to think of leaving. Her story is told in the second person, a smart narrative choice that asks the reader to identify with her: "This is the land you know and she gives you security; you have deep roots here, you're tied to her even though it takes so much to coax her into producing."

Perhaps the most compelling character is Marcela. A teacher, she's become disillusioned that the poor children of Peru are being neglected by an uncaring government. She leaves her husband and child and joins the Shining Path, which changes her in short order: "I felt naked if I didn't carry my weapon on my belt. My skin had molded to its shape. My hands demanded the revolver I had been assigned to liberate the wounded from their last breath. As if my fingers had lengthened and were injected into the temples of the wretched. Bullet fingers. Gun-barrel arms. Revolver body."

The stories of the three women converge at the end, in a series of horrifically violent passages — they're as different from one another as can be, but they end up sharing the same experience. It's as upsetting as you could possibly imagine.

Blood of the Dawn is a short novel, and maybe that's why it's so effective. Salazar Jiménez and translator Elizabeth Bryer make every word count, and the result is a work of concentrated intensity with no room for the reader to escape the horrors that fill just about every page. It's a novel that never blinks, never lets the reader blink, until the terrifying last words.

"These are photos that push you to look outside the frame, that gesture at all that hasn't been captured," Melanie muses toward the end of the novel. "How much is outside the frame? What stories will get away?" With this courageous and necessary novel, Salazar Jiménez refuses to let the stories of the victims of "the time of fear" get away. The violence that permeated Peru in the 1980s and 1990s is unspeakable, which is exactly why it needs to be spoken. That's what Salazar Jiménez does in this beautiful, horrifying work of art.