Accessibility links
Review: Gillian Welch, 'Boots No. 1 The Official Revival Bootleg' Welch and partner David Rawlings sift through their musical archives and select 21 tracks that document their early- to mid-'90s rise, before they emerged as leaders of an ascendant Americana scene. 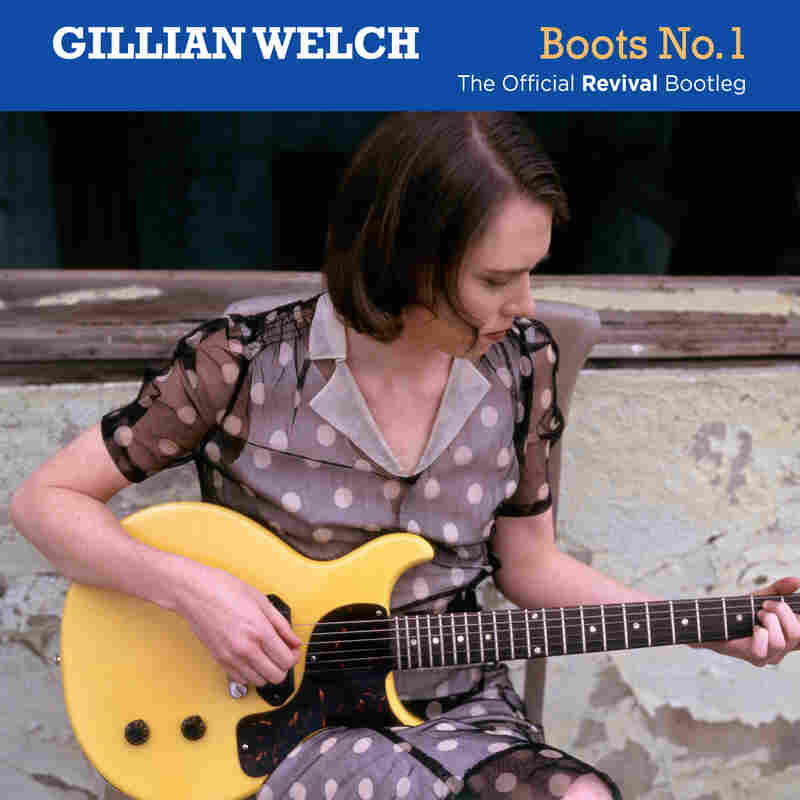 Appalachian old-time, folk and string-band music has too often been heard as the crude, naturalistic output of unstudied musicians who operate primarily on instinct. No duo has more profoundly recast those expectations over the last two decades than Gillian Welch and Dave Rawlings, who've mainly performed under her name. (On occasions when he sings lead, they're the Dave Rawlings Machine instead.) Together, these two highly educated singers, songwriters and instrumentalists have approached antique musical forms as an exalted craft, acclimating audiences to a refinement nested in austerity. Without their body of work, it's difficult to imagine a subsequent generation of acoustic artists — Sarah Jarosz, The Milk Carton Kids, Aoife O'Donovan, Lewis & Leigh, Mandolin Orange and Dori Freeman, to name a few — finding such smooth passage into sophisticated, contemporary exploration of rustic environs.

Welch's debut album Revival arrived at its 20th anniversary this year, which was motivation enough for Welch and Rawlings to sift through their vast musical archives and select 21 tracks that document what they were up to — a combination of emulation, experimentation and cultivation — before they emerged as leading lights in an ascendant Americana scene. That they've titled the project The Official Revival Bootleg drives home that this granting of behind-the-scenes access is a considered move by its creators, and a savvy one. It's fascinating to follow along as Welch and Rawlings feel their way to their singular sound, whose essential ingredients include "the rawboned refinement of their songwriting, the comely and lilting crooks in Welch's phrasing, the shimmery dissonance of their harmonies and the prickly, surging ecstasy of Rawlings' guitar runs."

In the early- to mid-'90s window captured on this collection, Welch was a different singer than the one listeners have come to know, swinging a little harder at times and bearing down a bit more. She plays off of Jim Keltner's fitful drum groove in an alternate studio version of "Pass You By," skims through a countrypolitan-style songwriting demo of "Paper Wings" and adopts a poker-faced swagger in the rock 'n' roll number "455 Rocket," which found a home on a Kathy Mattea album after failing to make the cut for Revival. "Dry Town," a droll talking-blues in the tradition of Johnny Cash, likewise landed in the dustbin, only to be fished out by The Nitty Gritty Dirt Band and Miranda Lambert, while the Memphis Minnie-influenced down-home blues number "Georgia Road," delivered with studied insouciance by Welch, had never seen the light of day until now.

There's a slightly unfamiliar quality even to some of the duo's better-known songs. In the 1993 living-room demo of "Orphan Girl" — the tape from which Emmylou Harris learned her Wrecking Ball version — Welch chirps her lament in a considerably higher register than the one she eventually settled into, and the at-home recording of "Tear My Stillhouse Down" is similarly lighter than the song's bleak sentiment. Those were mere starting points; the destination, as we well know, was a long-suffering suppleness that bears up beneath the grimmest storytelling. The "bootleg" also rounds up some of Rawlings' initial romps on a newly acquired archtop guitar, as his flurries of capricious notes reveal a restless intelligence. And so much of the narration — especially in "One More Dollar," "Barroom Girls," "Only One And Only" and "Red Clay Halo," the last of which got shelved until Time (The Revelator) — was already finely etched, even fastidious. The whole thing serves as a tremendous reminder of how and why this partnership came to matter so much.