Accessibility links
New Satellite Provides Weather Forecasts For The Final Frontier : The Two-Way The GOES-R satellite launched on Nov. 19. It'll enter orbit and sit 22,000 miles above the Americas, monitoring weather on the planet — and in space. 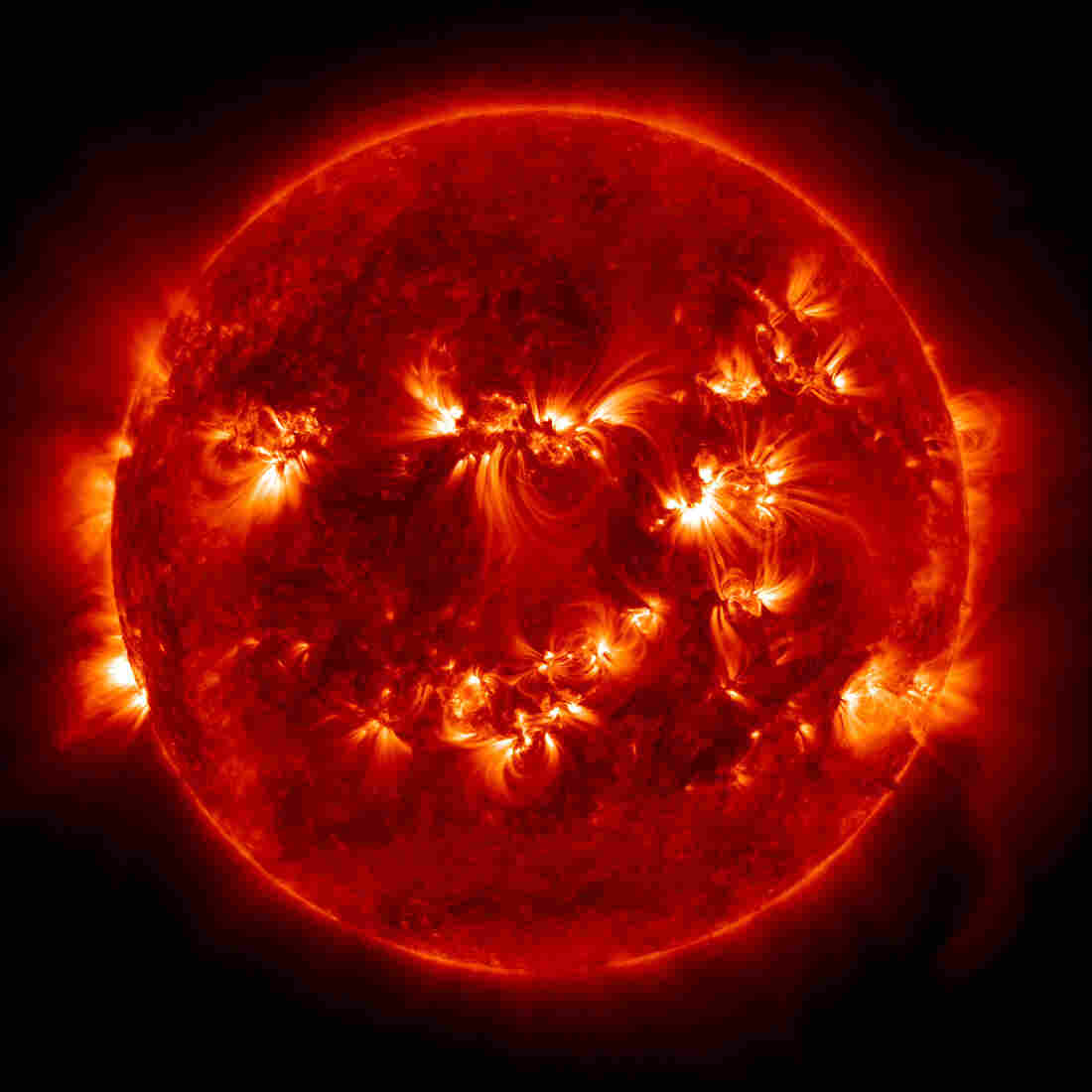 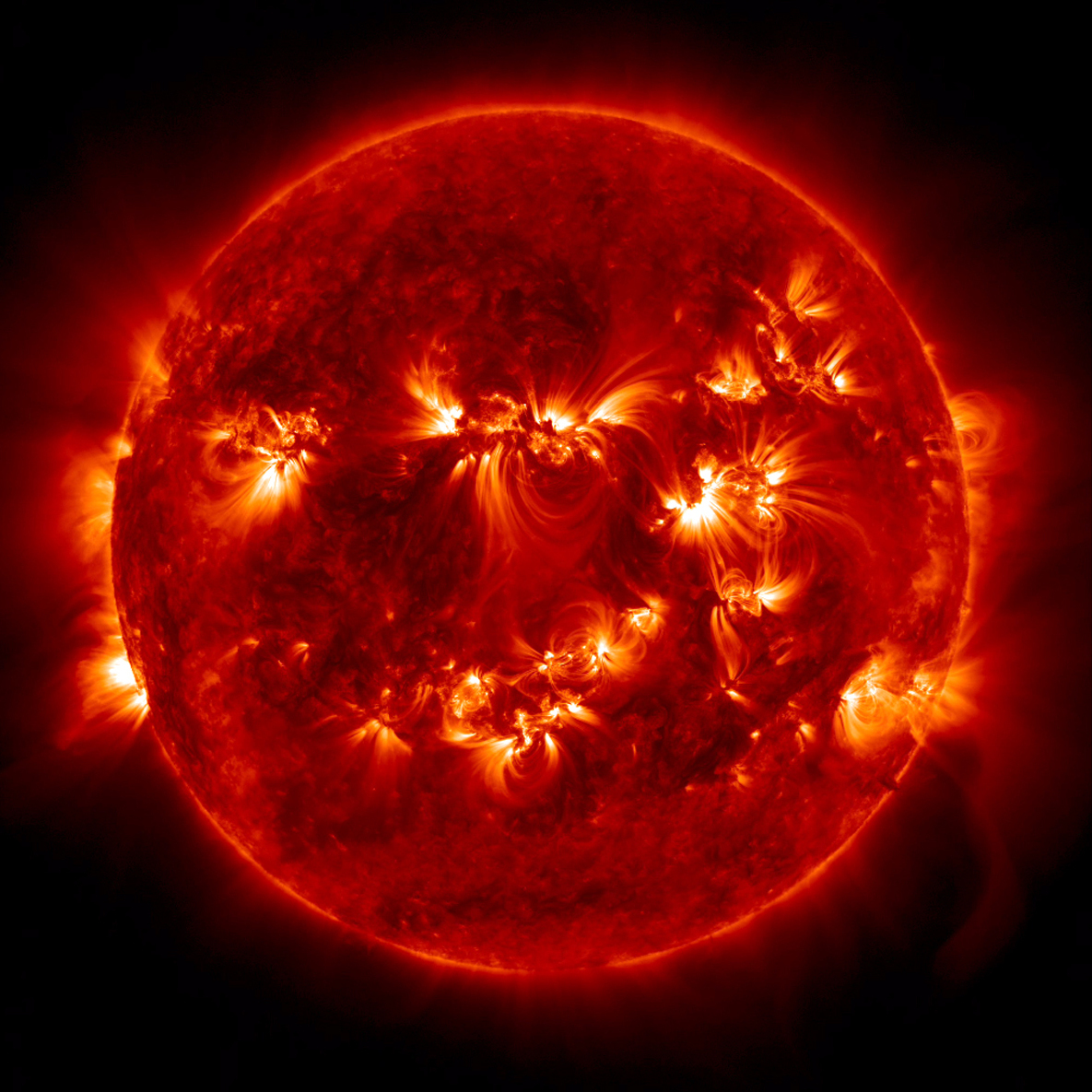 The sun regularly shoots particles into space. The resulting "space weather" can be very disruptive.

Every morning in a government office building in Boulder, Colo., about a dozen people type a code into a door and line up against a wall on the other side. There are a couple of guys in military uniform, and some scientists in Hawaiian shirts. They work at the National Oceanic and Atmospheric Administration, and they're here for a daily space weather forecast.

"Good morning, everyone," says Jeff Stankiewicz, one of 11 forecasters who rotate around the clock. He tells the group about a pair of sunspots he's keeping an eye on. "We have not seen any significant flare activity out of either of them over the last 24 hours," he says, before moving on to wind speeds and coronal holes.

It may come as a surprise that there's weather in space, but there is, and it's happening pretty much all the time. 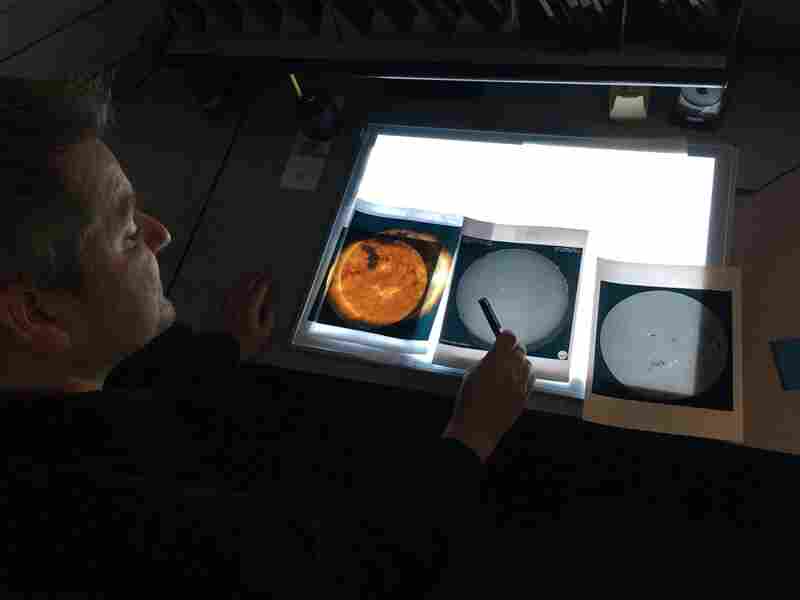 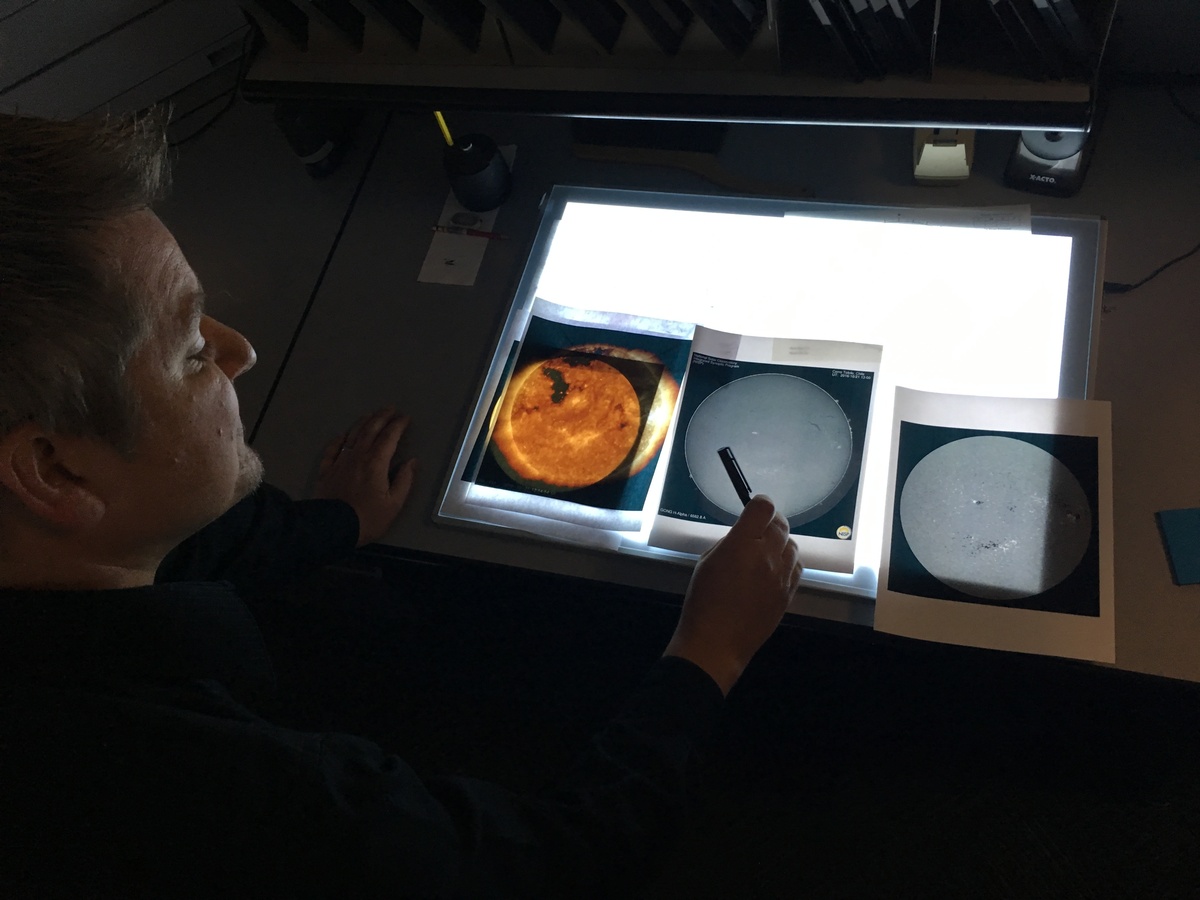 Jeff Stankiewicz is a space weather forecaster with the National Oceanic and Atmospheric Administration in Boulder, Colo.

It's caused by particles flying off the sun, through space and smashing into Earth's atmosphere.

Right now, the data that give people like Stankiewicz an idea of what's going on out in the void comes from a series of satellites that have monitored weather on Earth and in space since the 1970s. On Nov. 19, a new one called GOES-R launched from Cape Canaveral. It's outfitted with gadgets that have been tested on NASA's Solar Dynamics Observatory and will now hover 22,000 miles over the Western Hemisphere.

The imaging devices on board will feed straight into operation centers like the one Stankiewicz works in, which features a wall of screens that show the sun's twitchy, swirly activity through different wavelengths of light. Stankiewicz has had his eyes glued to these screens for a few hours. His job is to figure out which of the puffs and swirls might cause problems for Earth, like the spurt of hot gas he saw fly off a few hours before.

"So, pay attention here," he says, pointing to a spot on a video showing the sun's activity over the last few days. A dark red puff of what looks like smoke lifts off the surface and disappears into space. It looks wispy and delicate, but jets of hot gas like that can be huge.

"It's a billion tons of material traveling a million miles an hour," says Rodney Viereck, a physicist with NOAA's Space Weather Prediction Center.

There are three kinds of space weather: photons, protons and plasma. Photons travel at the speed of light, arriving here in eight minutes. Protons take about half an hour to deliver radiation to Earth ("These protons may be the biggest challenge of getting humans to Mars and back healthy," Viereck notes.) Plasma can take three days. 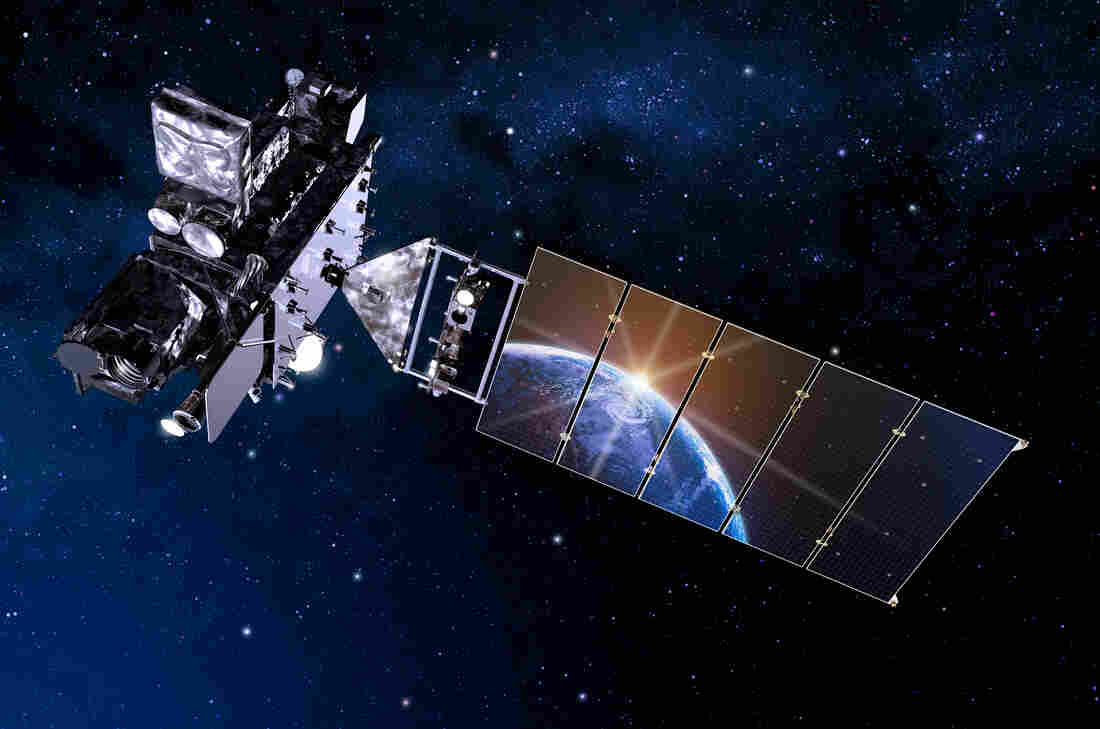 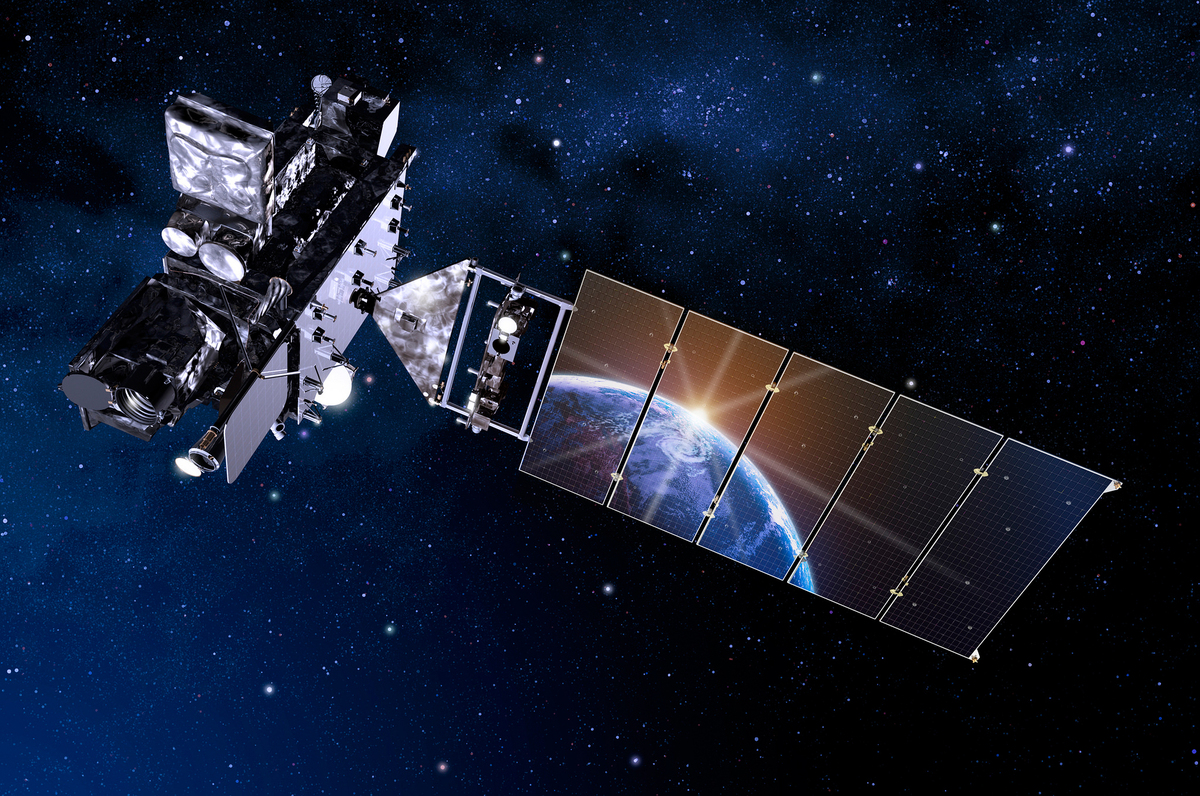 An artist's depiction of the new GOES-R satellite.

All these sun spewings are the reason why people rely on satellites like GOES-R, which also collect the information that goes into regular weather forecasts like ones on a smartphone.

This satellite's decked out with better imaging technology than ever, because forecasters want to know if nasty space weather is headed our way.

When space weather reaches Earth, it can change the shape of the atmosphere and add a lot of space gunk to it. That can skew GPS locations, bend high-frequency radio signals, and drag down satellites by making the atmosphere more dense. But the real threat for most of us is that space weather can fry the electrical grid. In the last few decades, it has knocked the power out in Sweden, South Africa and Canada.

In 1859, a massive solar storm lit up the sky with an aurora borealis that was visible all the way to India and Cuba. There weren't electric grids to fry back then, but it did put so much electricity into the air that it set telegraph offices on fire.

"It was very, very much a huge event. We don't get many of those," says Viereck.

In 2012, Earth almost found out what it would be like to experience that size of solar storm in an era when people rely so much on electronics. It narrowly missed the planet.

One of the big questions, says Viereck, is: "How big can it be? How big of an event can occur?"

For now, there are no giant space storms in sight. But if one of those big events was about to occur, GOES-R and other satellites like it should provide some warning.

In the meantime, the satellites will also keep a close eye on Earth weather, using new gadgets to map the location of lightning strikes and to take rapid-fire images of severe storms.

That's what Tim Gasparrini is most excited about.

"In the first six months of operation for GOES-R, it will return more data than all of the previous geostationary satellites of the U.S. combined. Think of it as a quantum leap for weather forecasting," says Gasparrini, who oversees the team that built GOES-R at Lockheed Martin, outside of Denver. They're now building three identical copies, predictably named GOES-S, T and U.

It's a delicate operation. Fans filter air through vents in the floor and ceiling of a big warehouse. Removing a single screw takes about three people, because dropping something is not an option — once it's in low-gravity, any loose piece can float around and jam things. And everyone wears head-to-toe bodysuits that make them look like high-tech Oompa Loompas.

"You may say, 'Gee, sounds like a little bit of overkill.' But these are operational satellites. We cannot have a satellite go down," says Gasparrini. "Because the last thing you want to do is get a big optical instrument up on orbit and look and there's some smudge on the lens."