Accessibility links
Donald Trump Promises Immigration Crackdown, But 'Sanctuary City' Label Has Gray Areas Donald Trump wants to punish local law enforcement that doesn't cooperate with immigration law, but the decisions to enforce are varied, and some worry it could lead to abuse. 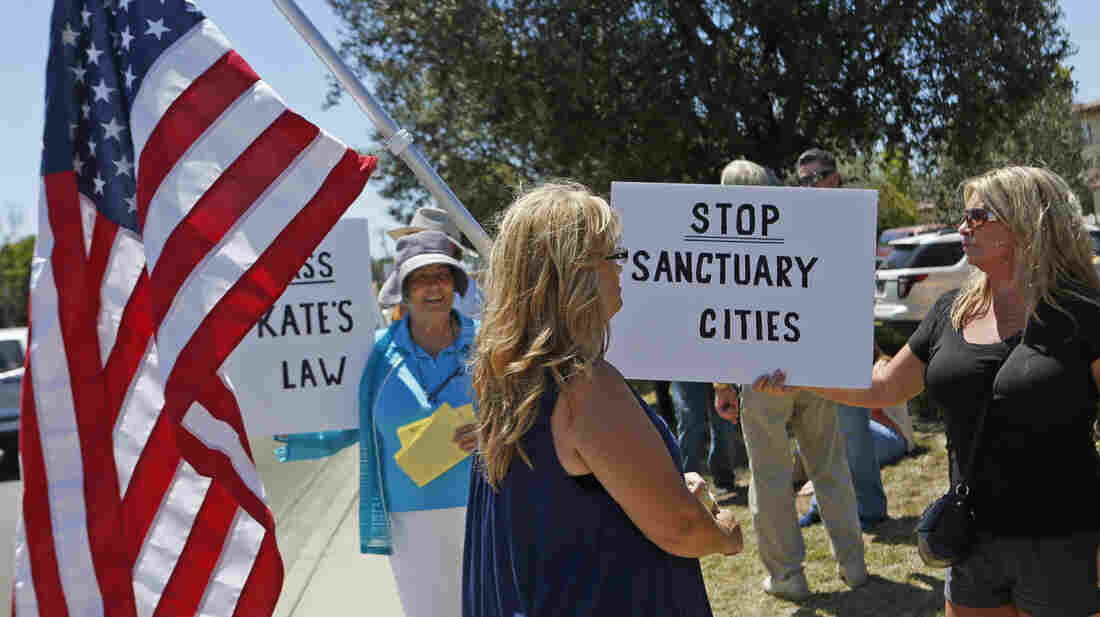 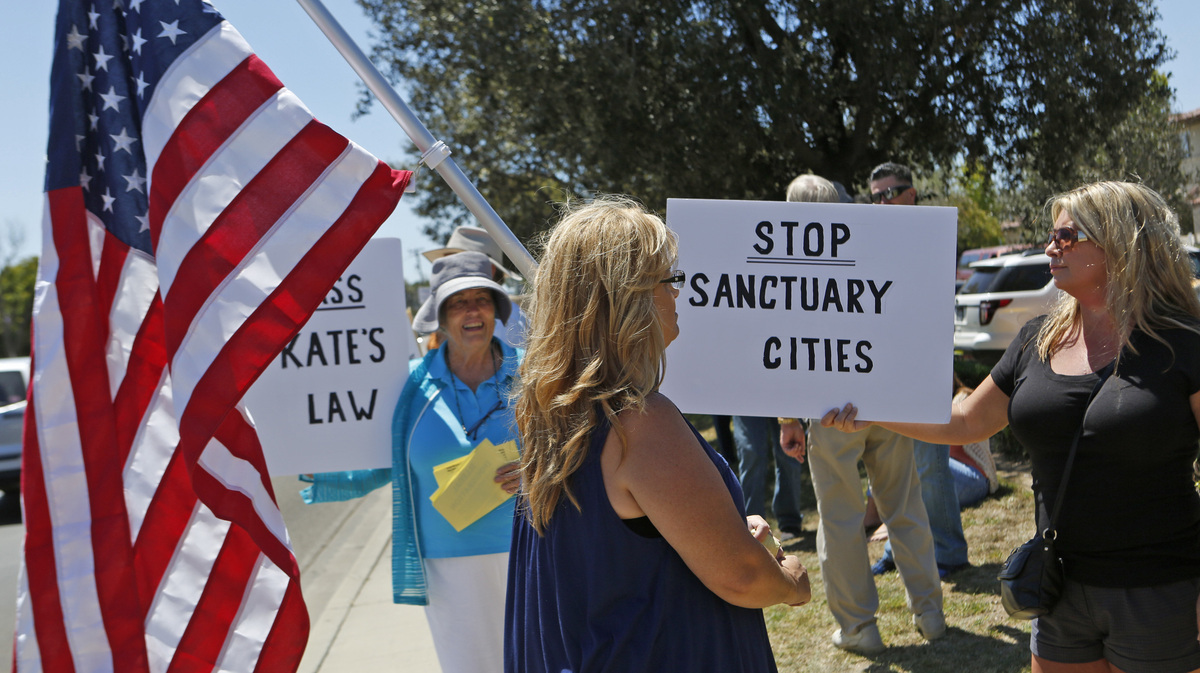 Carmen Spoerer, right, rallies among others protesting against sanctuary cities near the Santa Maria courthouse in Santa Maria, Calif. on Aug. 13.

During the campaign, Donald Trump railed against "sanctuary cities" — generally understood to be jurisdictions where local law enforcement doesn't cooperate sufficiently with federal immigration authorities. Sanctuary cities were an especially hot issue because of the death of Kate Steinle, a tourist shot by a Mexican national in San Francisco in 2015.

In an August campaign speech, Trump promised to "end" sanctuary cities by blocking their federal funding. But keeping that promise will be complicated by the fact that the term "sanctuary city" has no clear legal meaning. It comes out of the 1980s "sanctuary" movement of Christian churches that sheltered refugees from Central America, but these days the term is used increasingly by groups opposed to illegal immigration. The Center for Immigration Studies, for example, has a map tracking "sanctuary" jurisdictions which "threaten public safety."

"There is no definition of a sanctuary city," says Lena Graber, an attorney at the Immigrant Legal Resource Center in San Francisco. She says different places have taken different approaches. "There are a lot of sanctuary policies that are more just about not asking about immigration status by city agencies or law enforcement," she says, while other jurisdictions are called "sanctuaries" because their jails won't hold people at the request of Immigration and Customs Enforcement.

In the latter case, the jails that don't honor ICE "detainer" requests often do it for reasons that are practical, not political.

The jail in Lafayette Parish, La., for instance, stopped honoring ICE detainers out of a fear of lawsuits by people who might be able to claim they're being held illegally.

"We're depriving them of their libery," says Sheriff Mark Garber, "on a suspicion that hadn't been investigated promptly or acted on at all."

Sheriff Garber says when his predecessor realized the federal government wouldn't indemnify the parish in case of lawsuits, he stopped honoring ICE detainer requests. But that led to accusations that the parish had become a "sanctuary," especially during the last sheriff's election. So when Garber took over, he instituted a compromise policy: the Lafeyette jail will hold people, but for no longer than 48 hours.

"I'm still taking a risk to cooperate with the federal government, because they're not offering me any reciprocal protection," Garber says. "I still think we're exposed, but I'm choosing as the leader in this community to go ahead and draw the bright line at the 48 hours."

Those bright lines are drawn differently in almost every jurisdiction. The King County jail in downtown Seattle, for instance, has a policy of honoring only the ICE detainer requests that come with an order from a judge. Other places take the severity of the person's criminal record into account.

Broadly speaking, the attitude in "sanctuary cities" is that local law enforcement shouldn't help to deport people accused of minor offenses, but "serious criminals" are less deserving of that protection.

"The use of local law enforcement for general deportation reasons, for low-level offenders, is not appropriate," said Los Angeles Police Chief Charlie Beck earlier this week. But he added, "We already, when somebody commits a serious violent crime, cooperate to what extent is legal with [the Department of Homeland Security]."

CHARTS: Here's What Donald Trump Has Said On The Issues

King County Sheriff John Urquhart makes a similar distinction. His deputies aren't allowed to ask people about their immigration status, and he says when they arrest someone for a minor crime, that shouldn't lead to deportation.

"Perhaps he's a shoplifter, stealing baby food to feed his family," Urquhart says. "I don't think we should be involved in turning those people over to Immigration."

But Urquhart adds, "That doesn't mean we can't deal with the true criminals." He gives the example of detectives investigating foreign-born drug dealers. "We want to let ICE know that they may want to take a look at this person, because they're a criminal, and I want them out of this country just as much as Donald Trump does."

It's a distinction the public generally agrees with. But it doesn't sit well with Thomas Saenz, president and general counsel of the Mexican American Legal Defense and Educational Fund.

"If a sheriff or sheriff's deputy or anyone else is, without a conviction, deciding this is a bad person, and [says], 'We want to find some other means of getting them out of the community and therefore we're going to call ICE,' that's bad policy. In fact, it is arguably unconstitutional policy," Saenz says.

"There should be a strict, strict wall of no cooperation between local law enforcement and federal immigration authorities," he says.

That kind of wall seems absurd to Sheriff Chuck Jenkins, of Frederick County, Md. He blames that kind of attitude for the fact that millions of "criminal aliens," as he puts it, are still at large in the U.S.

"Our failures to enforce the immigration laws as they are written, I think largely falls back to local law enforcement's failure to cooperate," Jenkins says.

He would like to see more jurisdictions do what his county does. His deputies aren't allowed to ask people about immigration status during contacts on the street, but that changes once a suspect is booked into jail.

"We ask two basic questions of everybody: 'Where were you born?' and 'What country are you a citizen of?' Any answer other than 'the United States of America,' we do an immigration status check," he says. If his deputies get an indication the person is in the country illegally, they hold him for ICE.

Jenkins is a vocal opponent of the "sanctuary city" idea, but he also acknowledges that sanctuary policies vary from place to place. Still, he doesn't think the Trump administration will have trouble identifying which jurisdictions deserve the label.

"I think the line is very clear in the fact that if your county does nothing — nothing — to cooperate, takes no action to cooperate with ICE, I think that by the very fact that you don't do anything you're a sanctuary city."

But if the bar is that low — a complete lack of cooperation with ICE — then the actual list of sanctuary cities may turn out to be quite short.