Accessibility links
Donald Trump Calls For 'Hamilton' Cast To 'Apologize!' After Cast Delivers Statement To Mike Pence Pence was met with boos and cheers as he came to see the show, and afterwards the diverse cast and crew delivered a pointed statement about what they believe really makes America great. 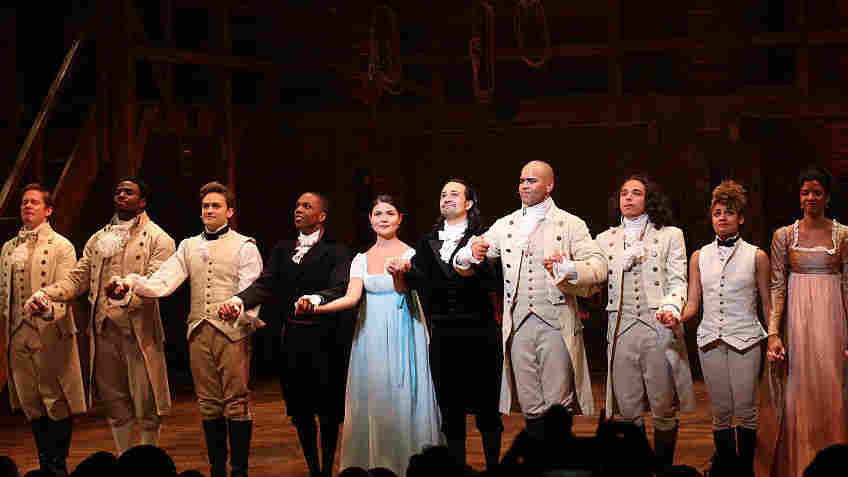 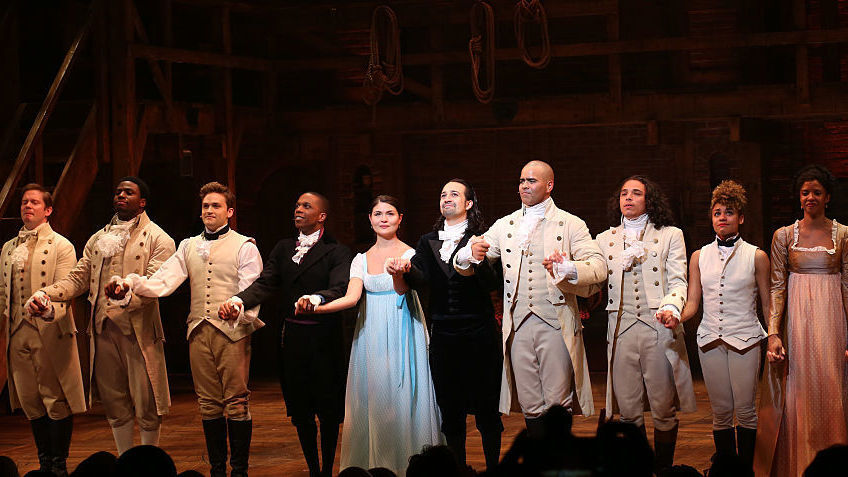 Leslie Odom Jr., Phillipa Soo and Ariana DeBose with Lin-Manuel Miranda with the cast during their final performance curtain call of Hamilton in July.

Vice President-elect Mike Pence was presumably seeking a quiet night out at the theater, enjoying one of Broadway's hottest tickets with a Friday night performance of Hamilton: An American Musical.

What he got instead was a welcome of boos and cheers from the crowd and a pointed plea from the diverse cast and crew afterwards about what they believe really makes America great.

At the curtain call, actor Brandon Victor Dixon — who plays former Vice President Aaron Burr, who infamously shot and killed Hamilton in a duel — read a statement from the cast, which is made up of largely black and Latino actors who play the white Founding Fathers.

"There's nothing to boo here, ladies and gentlemen, nothing to boo," Dixon said, quieting the crowd who had met Pence with a mix of jeers and cheers when he entered the theater before the show. Pence was on his way out, but Dixon urged him to pause and hear their thoughts. Dixon thanked Pence for attending and said he was welcome there.

Tonight, VP-Elect Mike Pence attended #HamiltonBway. After the show, @BrandonVDixon delivered the following statement on behalf of the show. pic.twitter.com/Jsg9Q1pMZs

"We, sir, we are the diverse America who are alarmed and anxious that your new administration will not protect us, our planet, our children, our parents, or defend us and uphold our inalienable rights, sir," Dixon said. "But we truly hope that this show has inspired you to uphold our American values and to work on behalf all of us."

Vice President-Elect Mike Pence Set To Govern At Trump's Side

As Indiana governor, Pence signed into law a controversial so-called religious freedom law, which sparked backlash from LGBT groups; he later signed an amendment to clarify some of its protections.

In the past, Pence has supported publicly-funded gay "conversion therapy," as well as calling for an "audit to ensure that federal dollars were no longer being given to organizations that celebrate and encourage the types of behaviors that facilitate the spreading of the HIV virus." Several of the show's actors, including Javier Munoz who plays the titular character, are openly gay. Munoz is also HIV positive. 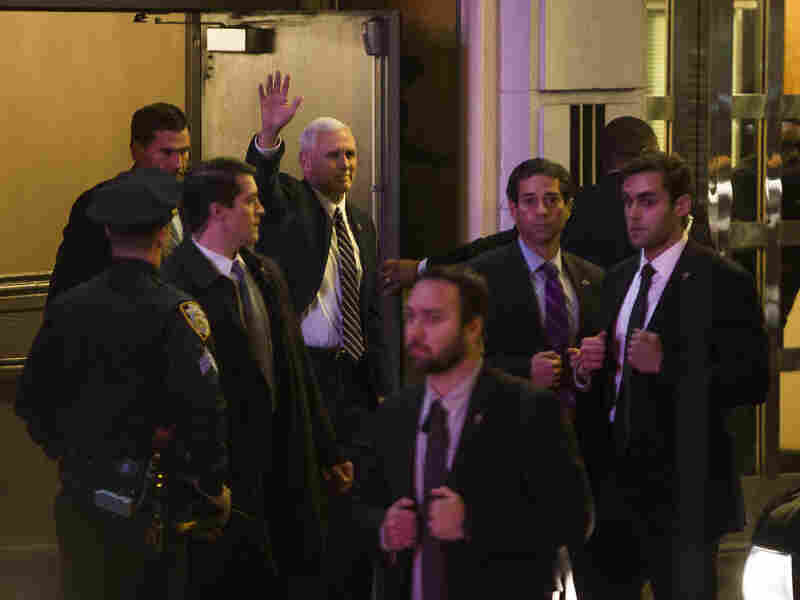 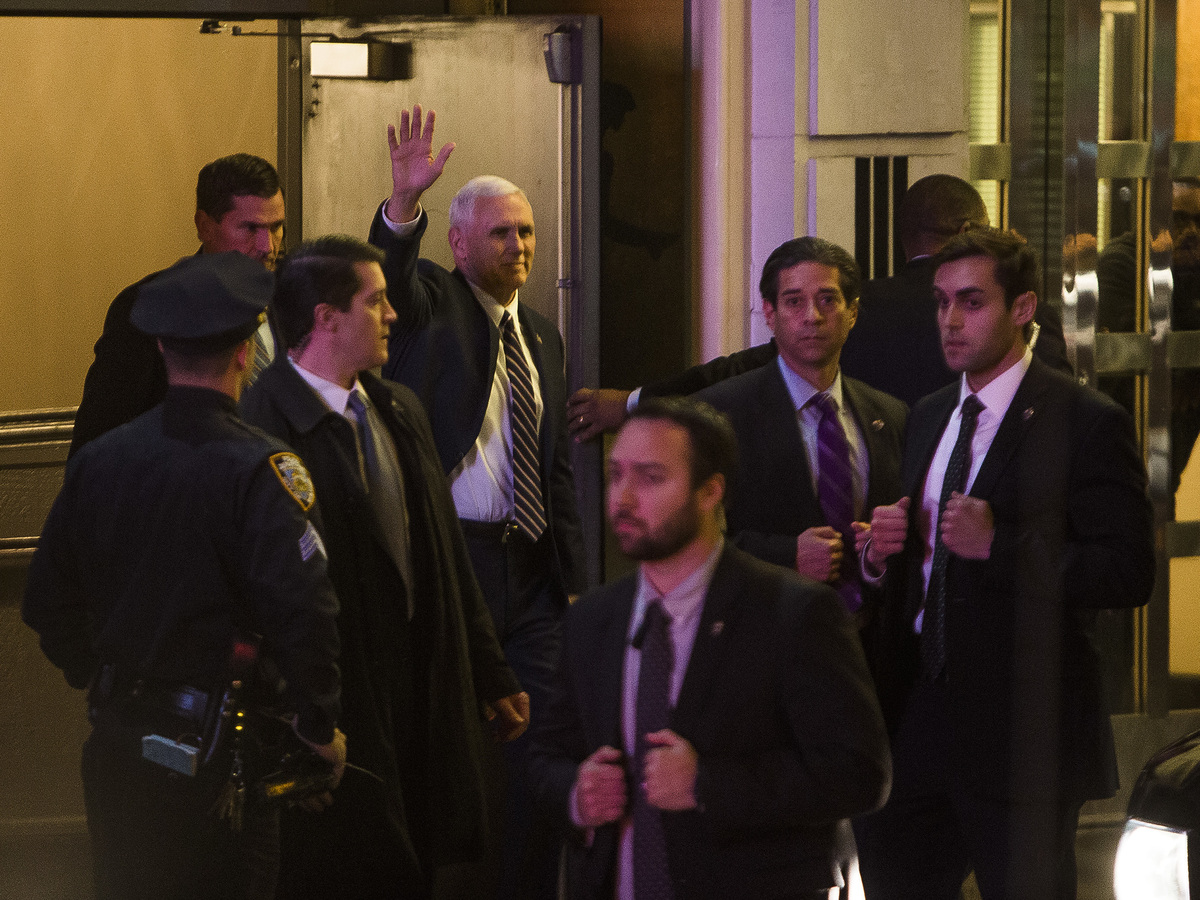 The New York Times reported that the statement was written by the show's creator and former star, Lin-Manuel Miranda, director Thomas Kail and lead producer Jeffrey Seller, with input from cast members.

According to NPR's Peter Overby, who happened to be watching the show in New York City Friday evening with his family, Pence's presence seemed to punctuate some of the lines in the Tony award-winning musical about founding father Alexander Hamilton, who rose from being a bastard, orphan immigrant to America's first Treasury secretary.

"His presence also seemed to provoke an especially strong ovation at the line 'Immigrants, we get the job done,'" Overby noted of the exchange between Hamilton and the Marquis de Lafayette at the beginning of the song "Yorktown," about the final major battle of the American Revolution.

Overby also reported that the song "What Comes Next," sung by King George III postulating about the challenges America faces after an unlikely victory, also provoked cheers and applause that stopped the show during the lines "It's much harder when it's all your call" and "When your people say they hate you, don't come crawling back to me."

The acclaimed politically-themed musical has been used as fodder for much of the campaign, with politicians and celebrities regularly attending. Democratic nominee Hillary Clinton saw the show several times and the cast also performed the show as a fundraiser for her campaign. Miranda also performed at a Broadway fundraiser for Clinton's campaign just weeks before the election. President Obama and first lady Michelle Obama are huge fans of the rap and hip-hop inspired musical as well; they introduced it at this past summer's Tony Awards, where it won 11 awards, and also had the cast at the White House to perform for high school students.

President-elect Donald Trump was less than impressed with the reaction from the crowd and the cast of Hamilton toward his running mate, claiming that the vice president-elect had been "harass[ed]" and demanded that Pence get an apology. Several times throughout the campaign, when Trump offended the gold star Khan family and a disabled reporter, he never apologized.

The Theater must always be a safe and special place.The cast of Hamilton was very rude last night to a very good man, Mike Pence. Apologize!

Our wonderful future V.P. Mike Pence was harassed last night at the theater by the cast of Hamilton, cameras blazing.This should not happen!

Dixon responded to Trump in a tweet, and once again thanked Pence for listening.

conversation is not harassment sir. And I appreciate @mike_pence for stopping to listen.