Accessibility links
Obama's Final Overseas Trip As President: Questions About Trump Abound Closing out his final overseas trip, Obama said he'd avoided ethical scandals by trying to follow the spirit, not just the letter, of the law and suggested Trump would be wise to follow his example. 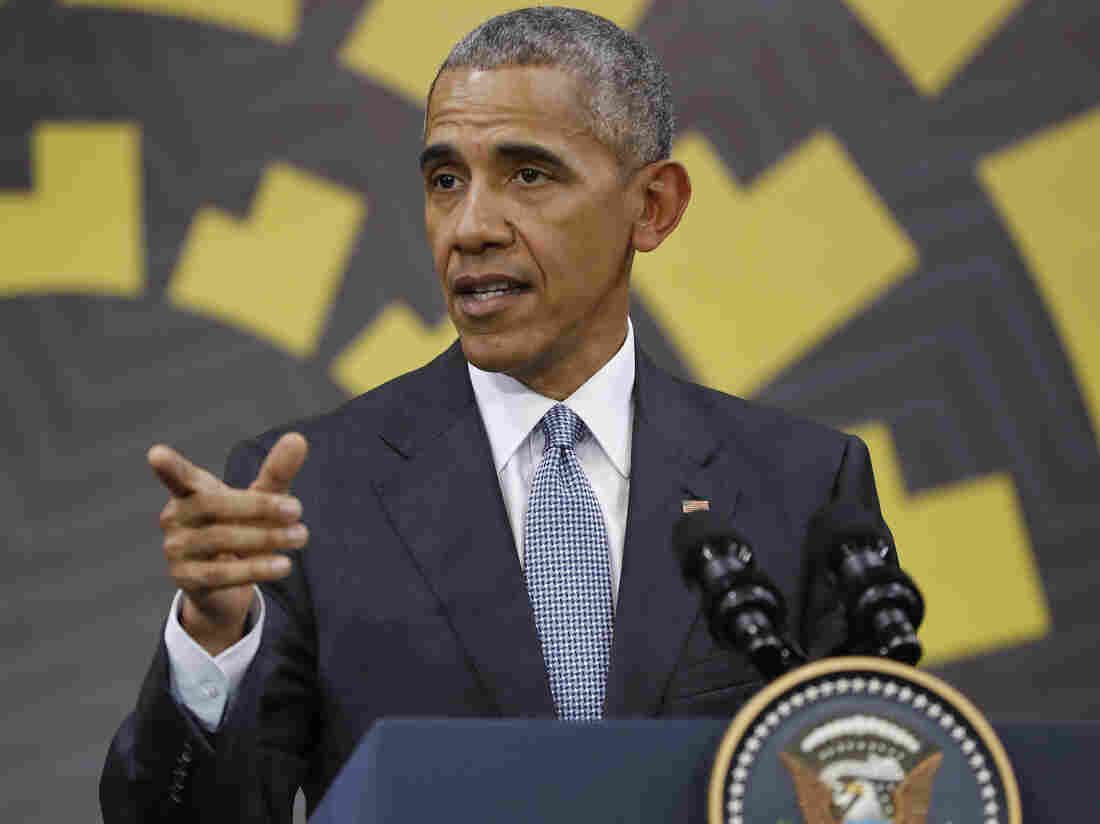 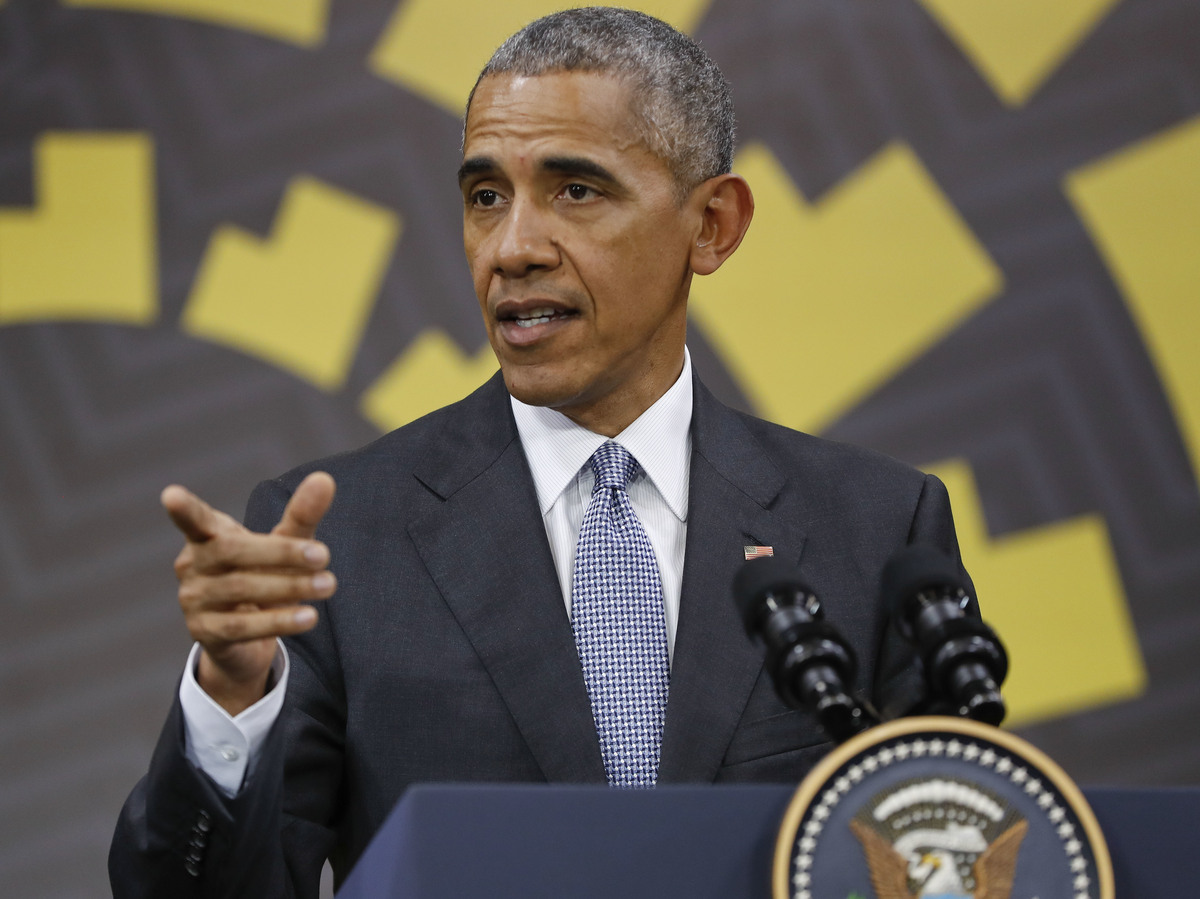 President Obama answers questions during a news conference at the Asia-Pacific Economic Cooperation in Lima, Peru, on Sunday.

President Obama said Sunday he doesn't intend to become his successor's constant critic — but reserved the right to speak out if President-elect Donald Trump or his policies breach certain "values or ideals."

Offering a rare glimpse into his thoughts on his post-presidency, Obama suggested once he was out of office he would uphold the tradition of ex-presidents stepping aside quietly to allow their successors space to govern. He heaped praise on former President George W. Bush, saying he "could not have been more gracious to me when I came in" and said he wanted to give Trump the same chance to pursue his agenda "without somebody popping off" at every turn.

But Obama suggested there may be limits to his silence.

"As an American citizen who cares deeply about our country, if there are issues that have less to do with the specifics of some legislative proposal or battle or go to core questions about our values and ideals, and if I think that it's necessary or helpful for me to defend those ideals, I'll examine it when it comes," Obama told reporters.

Obama, who has consistently praised Bush for the way he's handled his ex-presidency, faces a conundrum about how to handle his own. Though he's vowed to ensure a smooth handover of power, Obama is keenly aware he's being replaced by a new president who holds antithetical views on issue after issue.

The president spoke out vigorously throughout the campaign against Trump's calls for banning Muslim immigrants, deporting millions of people living in the U.S. illegally, repealing "Obamacare," and canceling the Paris climate deal, to name a few. Those policy proposals and others like them have stoked fear for many Americans who oppose Trump and are hoping vehement opposition from Obama and other Democrats might prevent Trump from implementing them.

Though Obama didn't specify what might trigger him to break silence, he left himself a broad window of possibilities. His comments suggested he'd be most inclined to weigh in if Trump violated basic principles Obama has tried to uphold, such as minority rights, equal protection and respect for civilian life. Obama has long warned that Trump might impulsively use nuclear weapons, and has cast a dim view on ideas like a Muslim registry, which Trump's incoming chief of staff declined on Sunday to rule out.

Yet Obama suggested that while he might not always hold his tongue, his goal wasn't to spend his time publicly disparaging his replacement.

"My intention is to, certainly for the next 2 months, just finish my job," Obama said. "And then after that, to take Michelle on vacation, get some rest, spend time with my girls, and do some writing, do some thinking."

Obama's remarks at a news conference in Lima offered some of his most specific indications to date of how he feels Democrats and Trump opponents should handle the next four years. Asked whether Democrats in the Senate should follow Republicans' example of refusing to even consider a Supreme Court nominee, Obama said they should not.

"You give them a hearing," said Obama, whose own Supreme Court nominee, Merrick Garland, has lingered for more than half a year due to the GOP's insistence that no Obama nominee be considered. Obama said he certainly didn't want Democrats to adopt that tactic spearheaded this year by Senate Majority Leader Mitch McConnell, R-Ky.

"That's not why the American people send us to Washington, to play those games," Obama said.

He declined to weigh in explicitly on whether House Democrats should stick with Rep. Nancy Pelosi as minority leader, arguing it was improper to meddle in the vote. But he said of the California Democrat, who faces a challenge for the leadership post: "I cannot speak highly enough of Nancy Pelosi."

Obama's remarks came as he concluded his final world tour as president. For Obama, it was the last time he'd take questions on foreign soil, a staple of his overseas trips that his administration has seen as an important symbol of America's commitment to a rigorous free press.

On his final day in Peru, Obama chatted briefly with Russian President Vladimir Putin about Ukraine and the Syria crisis, though Obama said the U.S. accusation that Moscow tried to influence the U.S. election didn't come up. The four-minute conversation, likely their last face-to-face interaction, came amid intense speculation about whether Trump's election might herald a more conciliatory approach to Russia.

Putin, speaking later in Lima, said he and Obama had a difficult working relationship but "always respected each other's positions — and each other." He said he'd thanked Obama and told him he'd be welcome in Russia "at any time."

Questions about Trump trailed Obama throughout his final overseas trip, as anxious world leaders quizzed him on Trump's stances on trade, foreign policy and the NATO alliance. Obama sought to reassure the leaders of Australia, Canada and other U.S. allies their longstanding ties with America wouldn't falter under Trump.