Accessibility links
As States Legalize Pot, Athletes Seeking Pain Relief Hope For National Legalization Now that marijuana use is allowed in 28 states, it has opened up renewed questions about the drug as a pain reliever for people — including players in the National Football League. 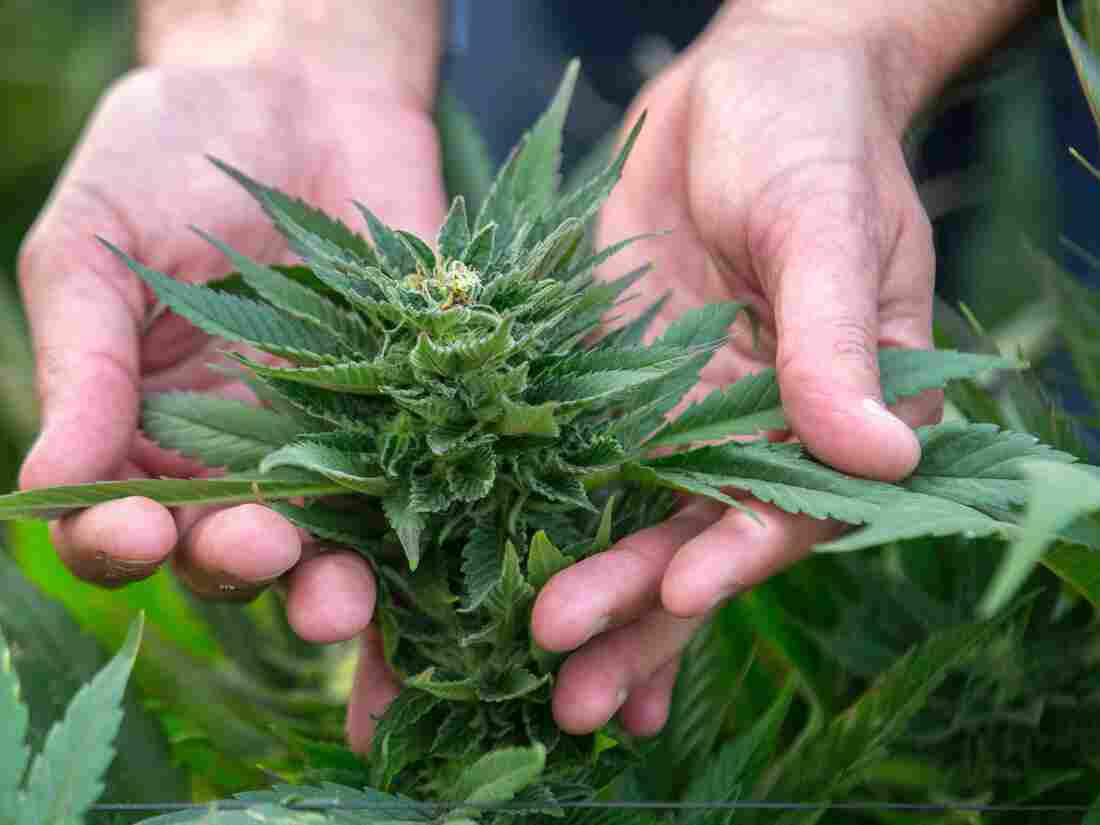 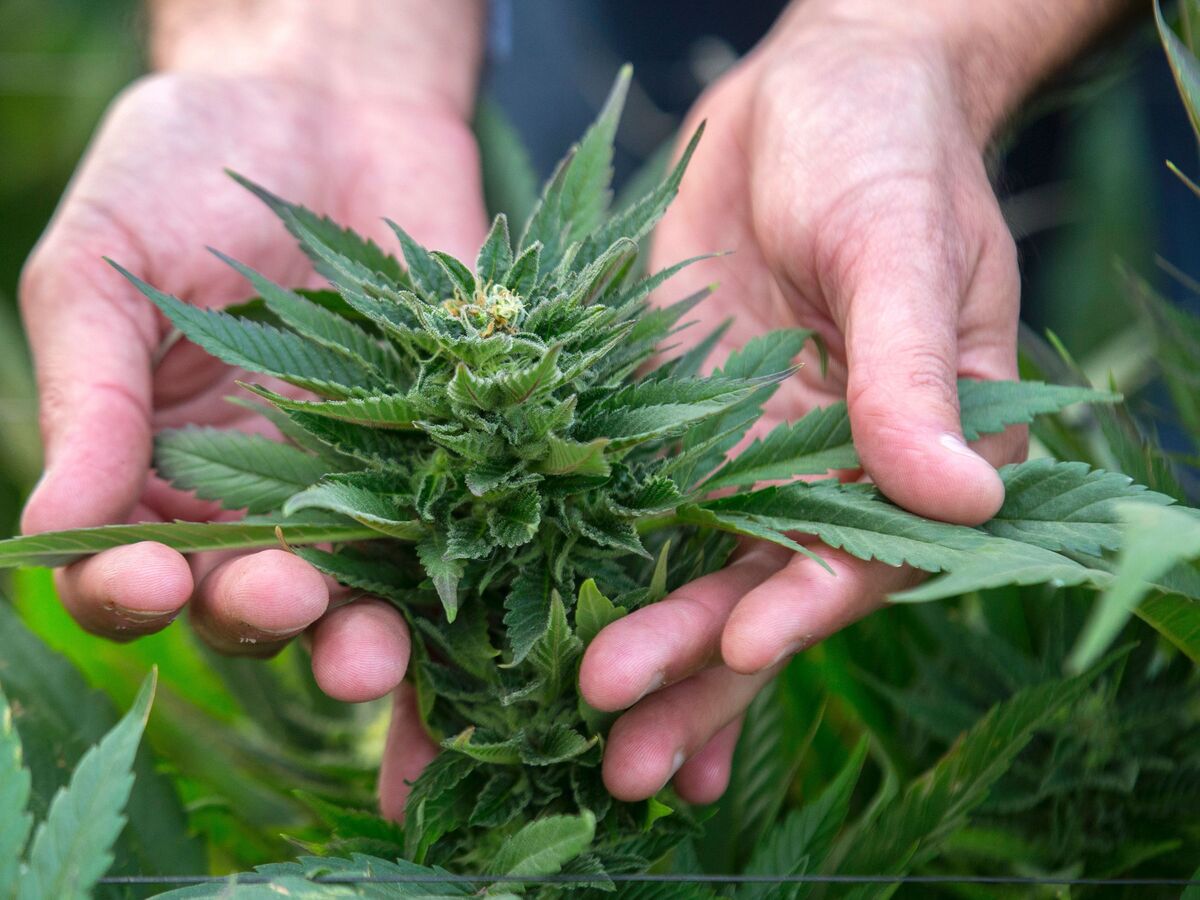 Marijuana is now legal for recreational or medicinal use in more than half the country, but it's still banned in professional sports.

Voters in seven more states said "yes" to marijuana this month. Pot now is legal for recreational or medicinal use in more than half the country.

It's still against federal law and classified as a Schedule 1 drug, meaning U.S. officials consider marijuana to have a high risk of abuse or harm, and no accepted medical use in treatment. Also, it's still banned in professional sports.

Many athletes hope that will change as momentum grows nationwide for legalization. That's especially true in the National Football League, where pain is a constant companion. Advocates say marijuana could offer a safer and better way to manage the pain.

Football hurts. As a fan watching from home, that's not always obvious — players collide, fall down, pop back up. They rarely wince or show weakness. That's just not how it's done in football.

How Pot Has Changed Colorado, According To Its Largest Marijuana Dispensary

How Pot Has Changed Colorado, According To Its Largest Marijuana Dispensary

A Short History Of Marijuana

A Short History Of Marijuana

Kyle Turley hurt plenty during his eight NFL seasons in the 1990s and 2000s. As an offensive lineman, he was involved in jarring collisions nearly every play when his team had the ball. He hurt after his career -– Turley sometimes walks with a cane. And in a recent video, he displayed one by one the bottles of powerful painkillers he used.

"Vicodin, Flexeril, Percocets, Vioxx, morphine," Turley recited as he plopped the bottles down on a kitchen counter.

Turley says be became addicted to the drugs and depressed to the point of contemplating suicide.

Then last year, he quit the prescription painkillers and started using marijuana to manage his pain.

"Just this right here," he says in the video, holding up a small marijuana bud. "That's all you need. That's about two hits."

Maybe Help From The Union

The video is from a website for the Gridiron Cannabis Coalition. Turley helped start the group as a way to promote marijuana as a legal option for pain management in football. The effort may be gaining traction as the country's acceptance of marijuana grows.

In the next couple of weeks, the NFL Player's Association will announce it has formed a new committee to examine pain issues for players.

"Certainly given some of the medical research that's out there," says union executive George Atallah, "marijuana is going to be one of the substances that we take a look at."

As it should be, says pain specialist Dr. Daniel Clauw. He's a University of Michigan professor of anesthesiology who has studied cannabis and pain management for the past five years.

He says comparing the safety of marijuana and opioid painkillers — the kind Turley and so many other NFL players and retirees use — is no contest.

According to the Centers for Disease Control and Prevention, in 2014 more than 14,000 people died from overdoses involving prescription opioids.

"You can't directly die from taking a cannabinioid, the way tens of thousands of people are directly dying from opioids each year in the U.S.," says Dr. Clauw.

Dr. Clauw published a study this year of about 250 people who said they'd used marijuana and opioids for chronic pain. The subjects said as marijuana use went up, opioid use went down. Significantly.

"They noted on average a two-thirds decrease in their opioid dose," says Dr. Clauw, adding, "they also noted that they just felt a lot better overall with respect to side-effect profile when their pain was being controlled largely with cannabinoids."

Dr. Clauw says marijuana isn't the only option for pain relief, nor is it a perfect alternative to opioids. Cannibis can be addictive, although much less so than narcotic painkillers.

"I'm really not as pro-cannabinoids as I am anti-opioids," he says.

Still, with more research, Dr. Clauw and others could become more bullish on cannabis as a pain reliever.

The kind of research needed is a mechanistic study, "Where we might want to look into the human brain to see exactly how cannabinoid is working or look at the subset of people that is going to respond best to a cannabinoid," Dr. Clauw says. "In order to do those studies, we have to be able to administer the cannabis [to humans] in a controlled setting. Know the dose of it, know the strength."

But scientists are limited in what they can do because of marijuana's continuing Schedule 1 classification. Researchers have to get approvals from multiple agencies, a time-consuming process.

"It really is incredibly onerous on the part of the investigators to get all approvals you need to do research with Schedule 1 drugs," Dr. Clauw says. "It has inhibited many of us from doing science on cannabinoids because we simply don't want the hassles."

In the absence of more stringent science, and more knowledge that potentially could change minds about marijuana, the Federal Government holds firm and the NFL maintains its ban.

The league tests for marijuana and suspends a player after four violations. The NFL issued a written statement on the subject, saying in part that the league would be open to reconsidering its policy, which it collectively bargained with the player's union. But for now, the league's medical experts haven't recommended any changes.

"I don't know where they're getting their medical experts," Dr. Clauw says. "I don't know hardly anyone in the pain field that would be able to support the position that the NFL is taking, based on just scientific data."

When asked to provide one of its experts for an interview, an NFL spokesman told NPR, "they don't speak to the media."

Meanwhile the professional football season rolls on, and the hurting continues as well. For players, and now their union, the search continues for better and safer ways to ease the pain.