Accessibility links
Could A Trump Presidency Be Pro-Israel And White Nationalist At The Same Time? Donald Trump promises to be the most aggressively pro-Israel president ever. His embrace of an adviser whose media enterprise is tainted by anti-Semitism allegations has some Jewish leaders concerned. 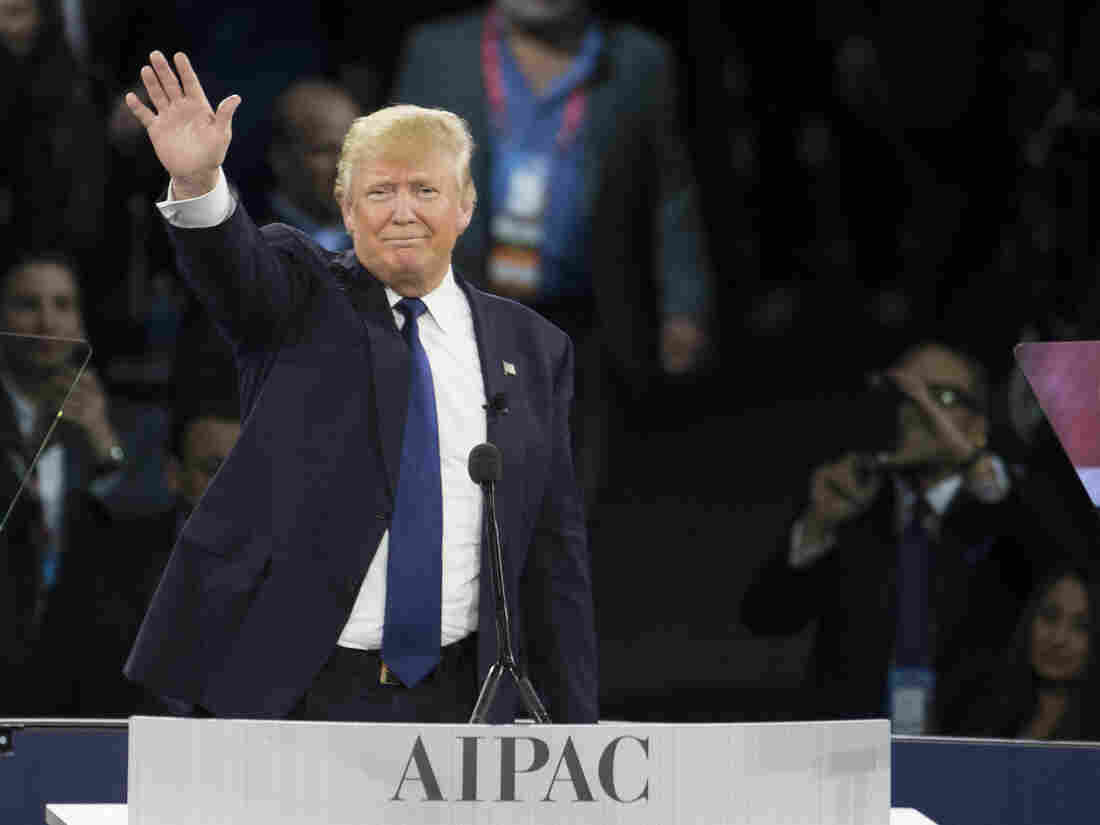 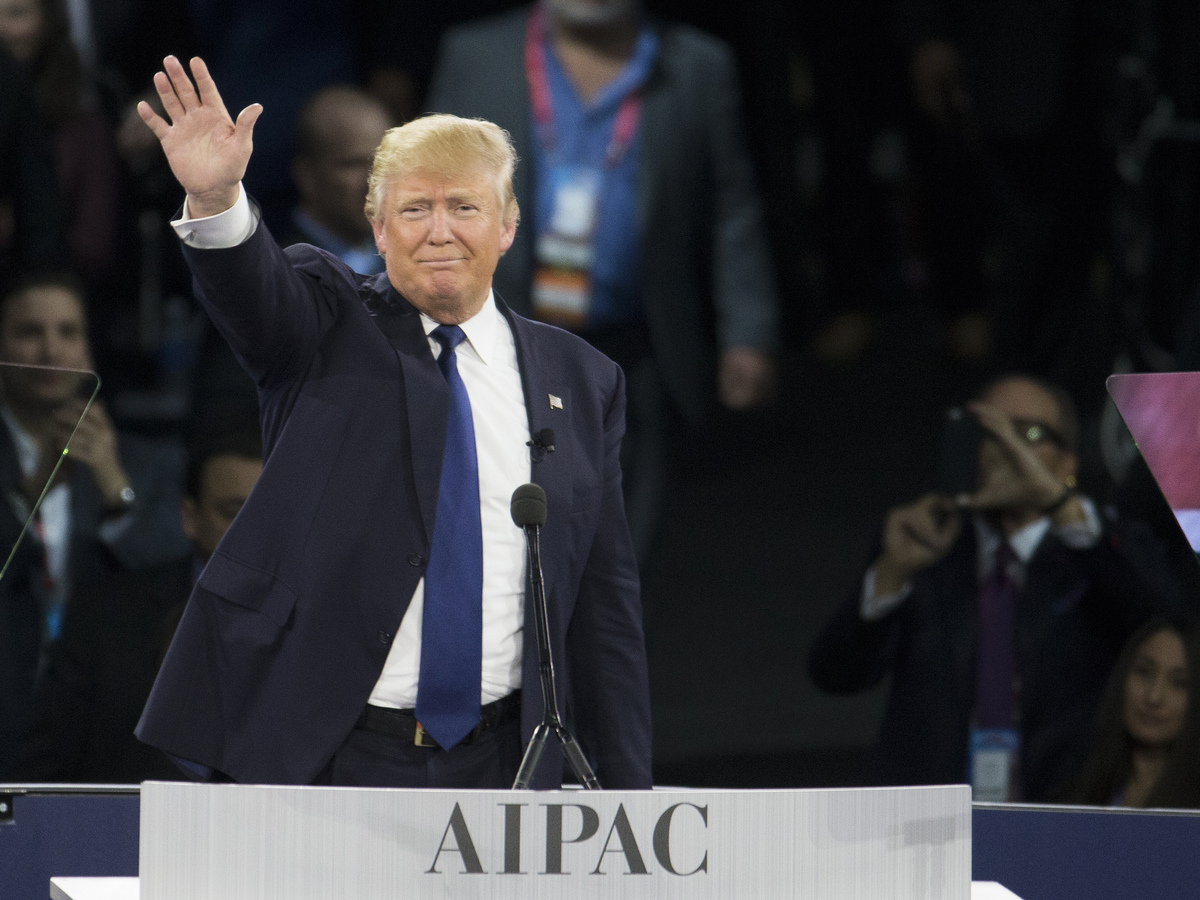 During his campaign for president in March, Donald Trump spoke at the 2016 American Israel Public Affairs Committee Policy Conference in Washington, D.C.

When Donald Trump shared his views on U.S.-Israel policy with the American Israel Public Affairs Committee last March, one line in his speech was greeted with thundering applause.

"We will move the American Embassy to the eternal capital of the Jewish people, Jerusalem!" he shouted.

Previous presidential candidates have made the same promise, but none have kept it, having been warned by their security advisers that it would complicate Middle East negotiations and anger key allies.

Trump and his aides, however, insist he will be the exception. His closest advisers — Breitbart News' former executive chairman Steve Bannon, retired Lt. Gen. Michael Flynn, and Trump's son-in-law Jared Kushner (himself an orthodox Jew) — are all known for their Zionist views.

The people around him and his own statements, in fact, suggest Trump could actually be the most pro-Israel U.S. president in many years.

And yet, many American Jews fear that a Trump presidency could be accommodating of anti-Semitism. After all, they argue, Zionism and anti-Semitism are not necessarily contradictory.

Trump's promise to recognize Jerusalem as the capital of Israel and his vow to veto any attempt to impose a settlement on the Israeli government do resonate with many American Jews.

Dratch, whose organization represents Orthodox Jewry in the United States, nevertheless says he worries about some of the people around Trump.

"We are concerned that, regardless of Mr. Trump's personal positions, [his] campaign and statements and tweets have opened the door for those with anti-Semitic or anti-minority or anti-black or anti-Muslim feelings in ways that we have not seen for quite a while in this country," Dratch says.

This is the challenge for Trump: Being strongly pro-Israel may not be enough to assure American Jews that his presidency will be good for them.

For one thing, Jews are themselves a minority. Prejudicial attitudes toward immigrants or Muslims or other minorities, whether by Trump or his key supporters, can make Jews nervous.

"When you have a demagogic movement that targets people because of their race or ethnicity or whatever, it's only a matter of time before they come for the Jews," says Jamie Kirchick, a columnist for Tablet magazine, which focuses on Jewish issues. "They may not come for the Jews now, but they will get around to them eventually."

There is also the issue of what Trump does not say. When journalist Julia Ioffe wrote an article critical of Melania Trump, Ioffe was subjected to a barrage of attacks on her, as a Jew. Asked about those anti-Semitic slurs, Trump said only that Ioffe had written an "inaccurate" article. To some, that sounded like he was excusing the anti-Semitic attacks.

"He could have done so much more, from his powerful position, to distance himself [from those attacks] and condemn them," says Jane Eisner, editor-in-chief of the Forward, a newspaper for American Jews.

"I have never called him an anti-Semite," Eisner says, "but his campaign has used anti-Semitic tropes, and he has acknowledged that support. He has encouraged a far-right fringe, and I hope it's just a fringe, to feel empowered and to do the nasty things that they do in his name."

Much of the controversy around Trump's views centers on his choice of Steve Bannon as his strategic adviser. Under Bannon's leadership, Breitbart has published anti-feminist, anti-Muslim, and anti-immigrant articles and won a reputation as being allied with nationalists who explicitly favor white European values.

Bannon, however, does have prominent Jewish supporters. The president of the Zionist Organization of America, Morton Klein, issued a statement last week saying it is "Orwellian" to accuse Bannon and Breitbart of anti-Semitism. "In fact," Klein said, "Breitbart bravely fights against anti-Semitism."

"Every article that I've read in Breitbart about Israel is supportive," Klein told an NPR reporter. "Bannon is an ardent Zionist."

Jamie Kirchick argues, however, that Zionism and anti-Semitism are not necessarily incompatible. White nationalists, he says, point admiringly to Israel's character as a Jewish state and argue that it shows how the country is organized along ethnic and religious lines.

"They see Israel as an ethno-nationalist state, and they want to mimic that in the United States," Kirchick says. "That's what they like. There's also an element that sees the Jews as fighting Islam, basically the tip of the spear against the Muslim hordes."

Bannon was expected to attend a Zionist Organization of America gala dinner in New York on Sunday night. Though not invited, Bannon asked to attend the dinner, and Klein said he would have been welcomed.

In the end, however, Bannon did not show up.