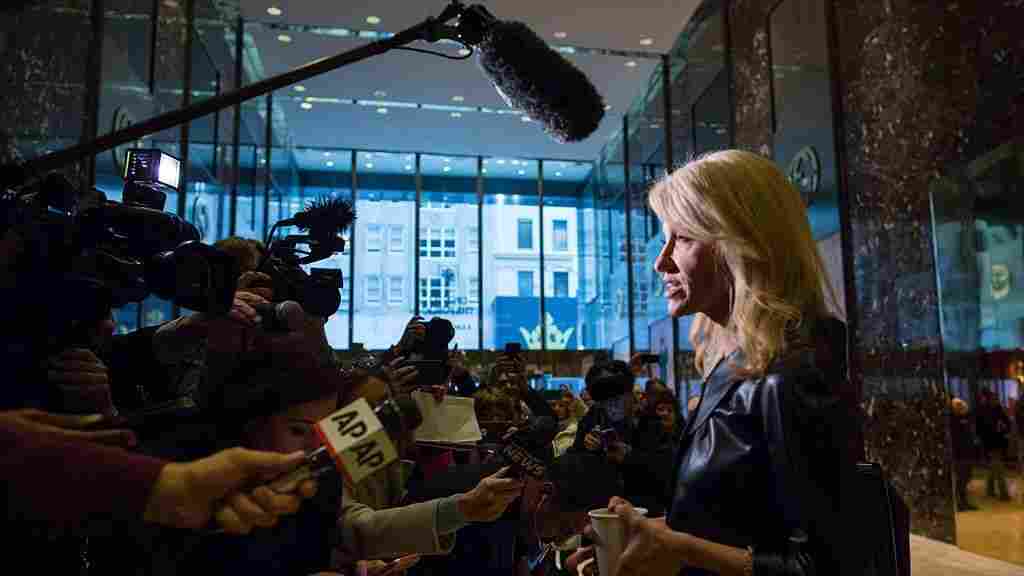 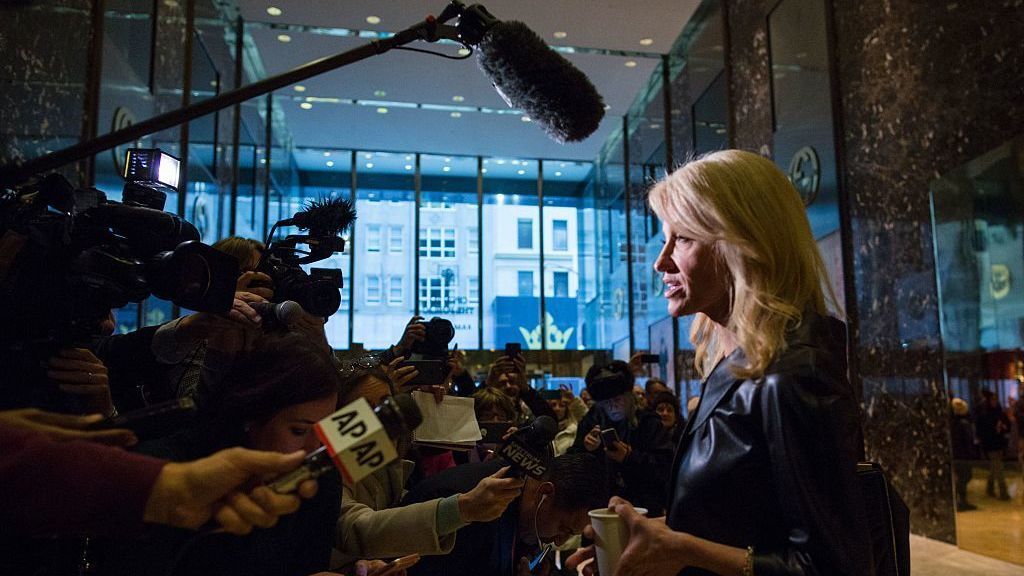 Kellyanne Conway, a senior adviser to President-elect Donald Trump, speaks to the media at Trump Tower on Monday.

Kellyanne Conway, a Trump transition senior adviser, defended President-elect Donald Trump's handling of his business interests, telling NPR in an interview that concerns about the influence his children may have in mixing their roles and the Trump companies with advising their father are unfounded.

"They're going to support their father as president of the United States the way they've always supported his presidential candidacy, and they'll continue to be supportive at the same time," Conway, who served as Trump's campaign manager, told NPR's Audie Cornish in an interview Monday on All Things Considered. "They'll continue to be wildly successful in the business world."

The roles Donald Jr., Eric and Ivanka Trump play in the White House have come under scrutiny. The children were said to be set to run the Trump businesses through a "blind trust," but all three also serve on their father's transition team. Though a Trump lawyer referred to the setup of the children running the organization as a "blind trust," that's not the way one works.

President-Elect Trump Continues To Blur Line Between Business And Politics

Typically when presidents or officeholders use a blind trust it's when their investments are handled by an investor, and they have no ability to manage or change them. That's crucial given a president's or key member of Congress' role in legislation or world events that can affect stock prices, investments or business interests. Trump has business entanglements and properties in the United States and all over the world.

Trump's daughter, Ivanka, sat in on a meeting with Japanese Prime Minister Shinzo Abe last week, raising questions about the mixing of the family's business and politics. There were initial reports that Trump had inquired about security clearance for his children, but the president-elect has denied that. Still, it's clear his children have influence with their father when it comes to politics, and Trump's son-in-law Jared Kushner, Ivanka's husband, figures to play a potentially prominent role in a Trump White House, formally or informally.

Conway told NPR that Trump would "comply with the law" and is consulting with "proper legal advisers." But there is hardly any precedent for a person with Trump's wealth and active business interests serving as leader of the free world.

Conway pushed back on the idea that Trump should sign a pledge of any kind not to further his business interests while in the White House. Earlier on Monday, an Argentine newspaper, La Nacion, reported that Trump had asked the country's president to help with business permits for a Trump office building in their call last week. Spokesmen for both Trump and Argentine President Mauricio Macri both denied the report.

"It's a very interesting situation to have a president-elect that is such a successful businessman and has so many holdings," Conway acknowledged.

Conway also commented on talk of a potential registry of Muslims in the country, saying it had been covered unfairly. She explained that Trump's "main concern is making sure" there's a system in place to better vet immigrants from "countries that tend to train and export and harbor terrorists."

"It is not a blanket situation," Conway argued. "He's made it very narrowly prescribed to countries that fit a particular description."

Incoming White House Chief of Staff Reince Priebus said on NBC's Meet The Press on Sunday that he wasn't "going to rule anything out" but that "we're not going to have a registry based on a religion," though "some people that are radicalized ... have to be prevented from coming into this country."

Conway also told NPR that the president-elect would hold a news conference "at some point" but that "anytime you try to apply conventional techniques to Donald Trump you're going to be disappointed."

Trump hasn't held a news conference since July 27, and he has waited longer than any president since Jimmy Carter to hold one after becoming president-elect.

In the audio version of this story, Kellyanne Conway says this year's election results mean just four states will have both Democratic governors and Democratic-controlled legislatures. In fact, there are six such states: California, Delaware, Hawaii, Rhode Island, Oregon and Washington.