Accessibility links
The Amazing Adventures Of Michael Chabon's Sort-Of-Grandpa In 'Moonglow' Moonglow is a playful, fictional take on the family memoir. Set in 1990, it stars young author "Mike" Chabon, who's visiting his dying grandfather. Grandpa, it turns out, has led a remarkable life.

The Amazing Adventures Of Michael Chabon's Sort-Of-Grandpa In 'Moonglow'

The Amazing Adventures Of Michael Chabon's Sort-Of-Grandpa In 'Moonglow' 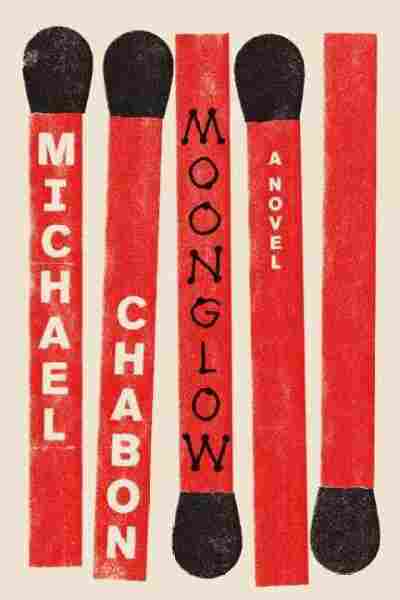 Michael Chabon turns out more beautiful sentences in a single novel than some writers produce in a lifetime. But he is far more than just an elegant stylist: Chabon is an adventurous writer who wields his gorgeous — and occasionally over-the-top — prose in the service of lively narratives that channel various genres — comics, detective, picaresque, historical — often in combination, as in The Amazing Adventures of Kavalier & Clay and The Yiddish Policeman's Union.

Moonglow, a playful twist on the family memoir, slyly incorporates classic elements of the genre, including a deathbed confession and the revelation of a long-hidden, dark family secret. There's also the almost de rigueur intersection of family history with important historical events — in this case, the sinister trajectory of Wernher von Braun, the Nazi aerospace engineer who eluded prosecution for his war crimes and later played a key role in the U.S. space program — not to mention literary works that include Gravity's Rainbow and The Right Stuff

Chabon's setup is cleverly convincing: Back in 1989, his narrator, author "Mike Chabon," just off a book tour for his first novel (that would be the highly successful The Mysteries of Pittsburgh), visits his dying, unnamed maternal grandfather — actually, as we soon learn, step-grandfather — at his mother's home in Oakland, Calif. "Lolling on his palliative cloud" of painkillers, this normally reticent electrical engineer recounts his life story — and what a story it is.

At long last, Mike learns firsthand about how his grandfather hunted von Braun in Germany during the last days of World War II, and how, back home in Baltimore, he met his French wife, a Holocaust survivor he hoped to repair just as he might a radio with faulty wiring. He learns how his grandfather landed in jail for felony and his grandmother in a state mental hospital after her second breakdown. "She was always threatening rain; he had been born with an umbrella in his hand," he writes.

But there are gaps in his grandparents' story. And in 2013, decades after their deaths, the narrator manages to fill in one of the bigger holes (a revelation I'll leave for readers to discover) during preliminary research for a possible novel about his grandmother's illness. He decides to abandon the novel in favor of this family history, and his explanation wryly echoes lines found in many a sincere memoir: "Sometimes even lovers of fiction can be satisfied only by the truth. I felt like I needed to 'get my story straight,' so to speak, in my mind and in my heart."

Moonglow, which takes its title from the oft-recorded jazz standard popularized by Benny Goodman in the 1930s, begins energetically, with what turns out to be a turning point in the grandfather's life: the day in 1957 he went ballistic, grabbed a telephone cord and tried to strangle the boss who had just fired him from the lousy job he'd had to take to finance his wife's psychiatric treatment.

The first half of Moonglow is propulsive; crazily vivid characters lurch into one gutsy, reckless venture after another. Scenes set in Germany during the chaotic last days of the war are especially powerful. When, on his deathbed, his grandfather declines to revisit the unspeakably brutal conditions he found at the liberation of the Nazi rocket factory in Nordhausen, the narrator fills in the gruesome details with research. Equally compelling are chapters set at Wallkill Prison, an experimental penal institution established by Franklin D. Roosevelt when he was governor of New York.

... despite its occasional misfires, 'Moonglow' is an often rollicking, ultimately moving read.

There's some terrific writing here, like this description of falling in love: "At the possibility of truly being seen, something in his chest seemed to snap open like a parachute." But there's some painful overwriting too, which fizzles even if meant as parody — to wit, eyes "the color of twilight in Monte Carlo, when the stars come out to twinkle like ten-watt bulbs, and the quarter-moon fans her hem of sequins against the sky."

Chabon's novel doesn't so much run out of fuel as lose velocity. Sometimes, the problem is an overload of sidebar ballast — about model rocket construction, or theatrical performances at a psychiatric hospital. But a bigger problem is the taming of grandpa, whose understandable resolve to avoid trouble after his prison sentence defuses this wonderful firecracker long before he lands on his deathbed.

Yet despite its occasional misfires, Moonglow is an often rollicking, ultimately moving read. It's a love story about shooting for the moon on multiple levels but accepting shortfalls. It's a life story that counsels celebrating rare moments of happiness amidst the craters. And like the song, it's liable to stay with you.