Accessibility links
Trevor Noah Says He Grew Up 'In The Shadow Of A Giant' (His Mom) The Daily Show host revisits his childhood in apartheid-era South Africa in his new memoir, Born a Crime. Noah says writing the book helped him see that his mother was the real hero of his story. 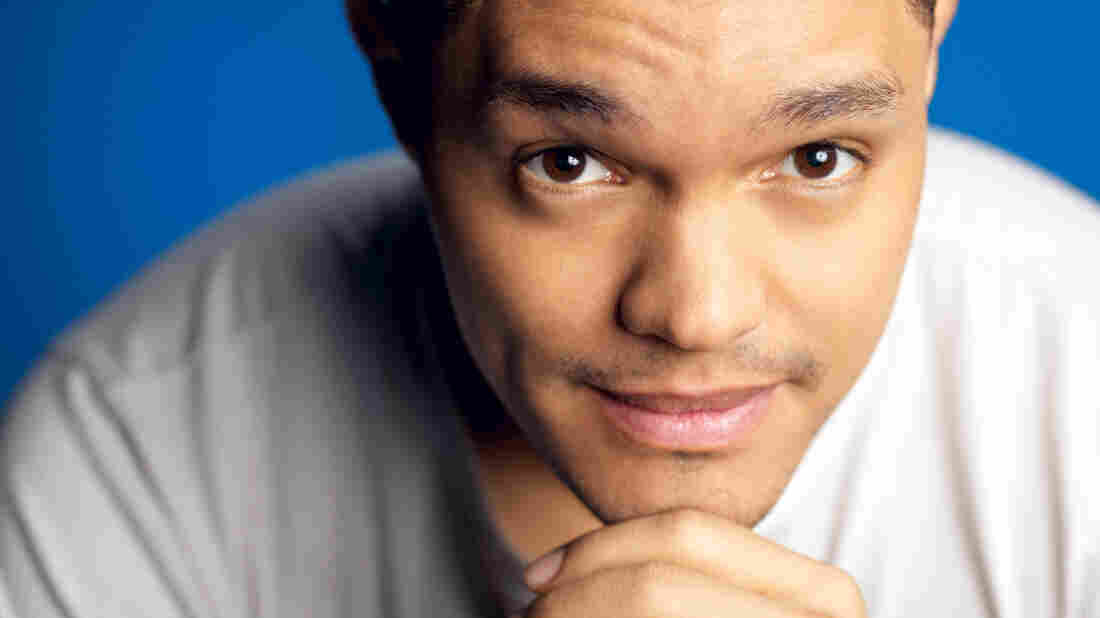 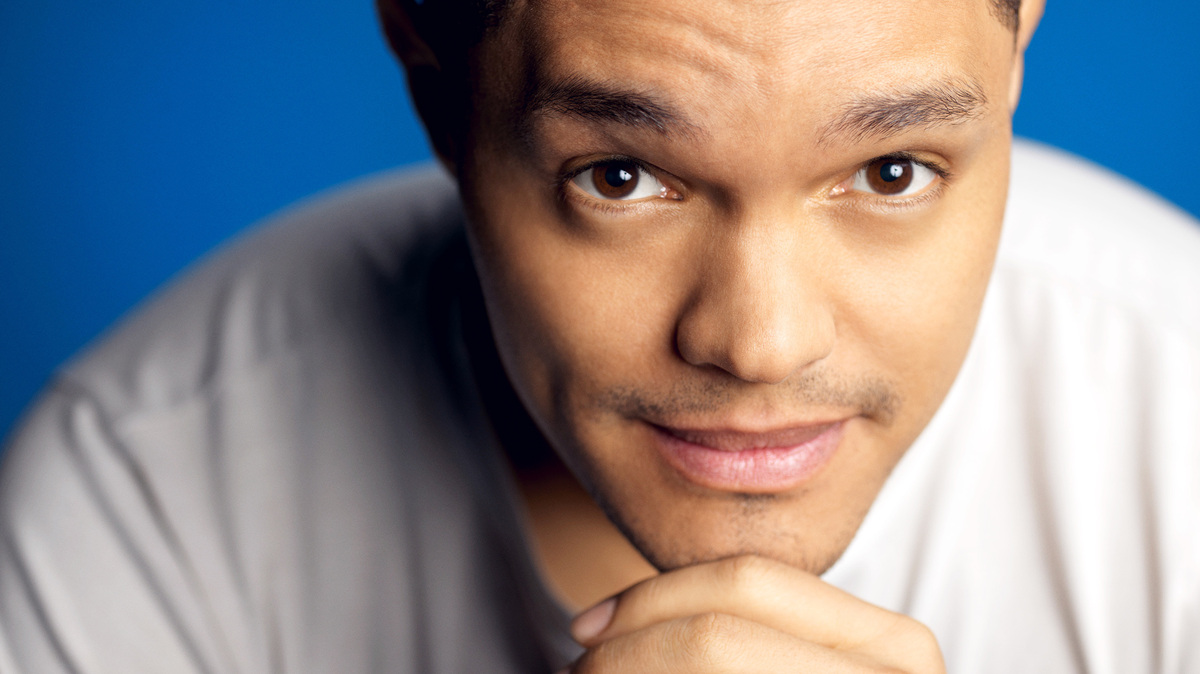 As the child of a black mother and a white father in apartheid-era South Africa, Daily Show host Trevor Noah was the living, breathing evidence that a crime had been committed.

Under apartheid, interracial couples who had engaged in sexual relations could be punished with years-long prison sentences, and biracial children like Noah could be taken away from their parents. As a result, Noah spent much of his early life in hiding.

He tells Fresh Air's Terry Gross, "My grandmother kept me locked in the house when I was staying with the family in Soweto. ... If the police did show up ... it was a constant game of hide-and-seek."

After apartheid ended in 1994, Noah and his mother faced new challenges, including his mother's relationship with an abusive alcoholic. Now Noah revisits his childhood with the new memoir, Born a Crime. It's the story of his life, but the comedian is clear about who the real star of the book is.

"I thought that I was the hero of my story, [but] in writing it I came to realize over time that my mom was the hero," Noah says. "I was lucky enough to be in the shadow of a giant. My mom's magic dust sprinkled on me and I hope I have enough of it to be as brave as she was and continues to be." 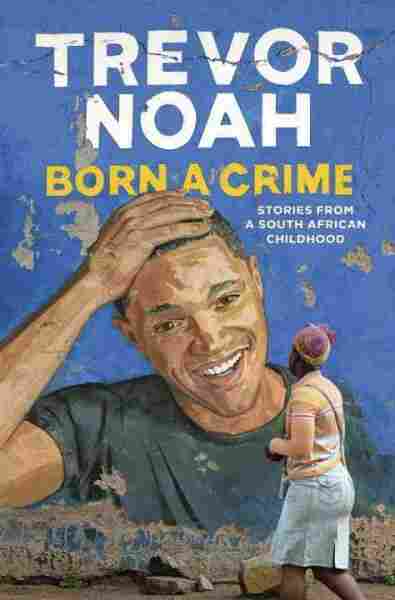 On how the law forbidding interracial relationships was enforced

People were encouraged to snitch. It was a police state, so there were police everywhere. There were undercover police; there were uniformed police. The state was being surveilled the entire time, you know, communications were monitored and anyone could snitch.

On his mother being arrested for seeing his father

So on and off my mom would spend a week in jail — she would spend a day in jail here, a week again, a week and a half, two weeks. ... My gran would tell me, "She'll be back."

Nobody knew where anybody was. The police didn't afford you a phone call, you just disappeared for a while. What was scary was we lived in a state where some people disappeared forever. If the police believed that they were planning any form of resistance against the state, then you were just gone.

On how his mother's conversion to Judaism affected him

I lived my life as a part-white, part-black but then sometimes Jewish kid, and I didn't understand because she didn't make me convert. ... When I turned 13, she threw me a bar mitzvah, but nobody came because nobody knew what the hell that was. I only had black friends — no one knows what the hell you're doing. So it was just me and my mom and she's celebrating and she's reading things to me in Hebrew. ...

That was the gift my mother gave me. I think that was part of her religious pursuits. My mother's always looking for answers, she's always searching for new information. I think she has a thirst or hunger that very few possess innately, so my mother never stagnated in a place where she said, "I have it all." ... She applied this to everything in our lives, and that was not staying in the space that you are supposed to be in, whether it be racially, whether it be in a community, whether it be gender norms, whatever it was. My mom said, "I am going to seek out more," and so I was constantly confused, which is sometimes a little bit disorienting, but I feel like it leads to a way more colorful life.

On the languages he speaks

I speak six currently. ... I speak English, obviously; Afrikaans, which is a derivative of Dutch that we have in South Africa; and then I speak African languages. So I speak Zulu, I speak Xhosa, I speak Tswana and I speak Tsonga. So those are my languages at the core. And then I don't claim German but I can have a conversation in it, so I'm trying to make that officially my seventh language, and then hopefully I can learn Spanish.

On code-switching between different languages and accents in different situations

I think it was something I inherited from my mother, who learned to do it. I, like a baby duckling, was merely mimicking the survival traits that my mother possessed, and I came to learn very quickly that language was a powerful, powerful tool.

Language and accents govern so much of how people think about other people. It's been happening since the beginning of time. Even now in America, you know when people say they "hate immigrants," they're not referring to a Canadian immigrant, they're not referring to somebody who has an accent [that] is slightly different to theirs — it's often that voice that throws you off. ... When you hear somebody speaking in an accent, it's almost like they're invading your language while they're speaking to you. Because if you hear someone speak another language, you almost don't care, but when they speak your language with an accent it feels like an invasion of something that belongs to you. ...

Code-switching is fun for me. I don't even do it intentionally.

Code-switching is fun for me. I don't even do it intentionally. I just find speaking to one person, I change a few words, I change my tone, I change my accent slightly. It's a seamless transition that I do without even thinking, like a chameleon. I don't think that I'm doing it, I just do it.

I shied away from any type of photograph ... because I thought I was hideous, because in my eyes I was. I had giant nodules on my face, around my neck, and the puss would ooze out of them. I had to go on medication repeatedly and the medication makes you suicidal and depressed and then you have to go off it because of your kidneys. It was just such a trying time.

In school that's your cache; how you look and what you can do determine everything in school. ... I was one of those kids who just stayed in a corner and watched the world pass them by. And I think, if anything, the biggest knock you experience in that world is — in terms of your identity — is you feel like you are less than you are, you feel like you don't have the right to belong. You're watching the world and the world exists without you.

Doing what I do now, I've come to realize now more so than ever that I have to approach what I do every day on The Daily Show with complete honesty. Funny enough, one of the biggest moments of realization was when Donald Trump won the election. Because when I came into the show, I said, "I think this guy can win." This is when he first came down that escalator and gave his first speech. ... And then I was like, "Wow, this guy is going to do well." I remember then people laughed at me. ...

I've seen this before. I have seen clowns that go on to take over their countries. I've seen buffoons who end up ruling their worlds. And it came to pass, and I've just come to realize I'm going to share my point of view.

Some people won't like me for it. I will work every day to be as honest as I can, because I do believe that we are all trying to get to the same place, but various people have tricked us into believing that we're not. ... In South Africa ... a government, very successfully, convinced the majority of a population that every single person there was blocking the other people from achieving greatness in the country, only to realize that we were all being oppressed at the same time.