Accessibility links
Book Review: 'Of Fire And Stars,' By Audrey Coulthurst Audrey Coulthurst's tale of a princess who falls in love with her intended prince's sister will remind you of fantasy novels you loved as a child — all teen angst, horses and reluctant love.

Sweetly Familiar Fantasy With A Twist In 'Of Fire And Stars'

Sweetly Familiar Fantasy With A Twist In 'Of Fire And Stars' 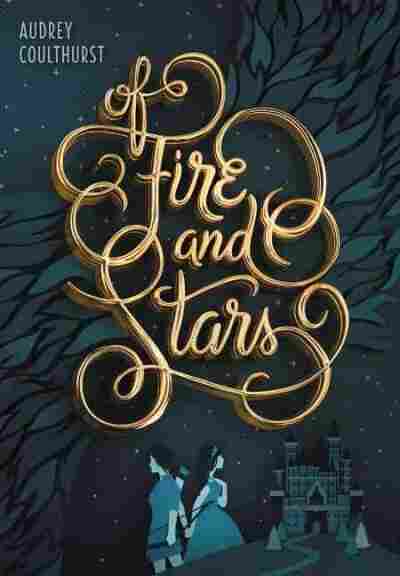 Of Fire and Stars

In most ways, Of Fire and Stars treads over very familiar ground. We find ourselves in a fantasy kingdom where magic is feared, and a princess must hide her powers in order to fulfill her destiny as a future king's bride. There are schemes and plots and romantic agonies aplenty, especially when the princess begins to fall in love with the wrong person. All of this would make an enjoyable enough read, but then Audrey Coulthurst elevates the story with a refreshing twist: The princess doesn't fall in love with a stable boy or the captain of the guard. She falls in love with another princess.

Princess Dennaleia of Havemont has spent her whole life preparing to be the perfect bride for the crown prince of Mynaria. She's studied politics and manners, and has carefully hidden away her problematic aptitude for fire magic. She knows that through her marriage, she will ensure safety for her people, and she is at peace with her destiny.

Then she arrives in Mynaria and immediately discovers she is woefully unprepared in one regard: Mynaria's chief resource is warhorses, and she has never learned to ride. It feels like a punishment when she's sent to riding lessons with the prince's surly sister, Mare, who would rather deal with horses than people. When a tragic assassination shakes the kingdom, the two of them form an unlikely team to get to the bottom of a murky political plot — and as they grow closer, they are forced to admit that their feelings run deeper than friendship.

'Of Fire and Stars' [is] reminiscent of the kinds of fantasy books I loved when I was a young teenager, tales of princess angst, horses, and the blossoming of reluctant love.

Here's the thing. Their love is forbidden, and tortured, and could potentially tear the kingdom apart — but not because they're both girls. Other same-sex couples are mentioned casually, and the fact of their love is not a problem. It is Denna's own sense of duty and self-doubt that stands between her and Mare, and that is what made me catch my breath as I read this book: In so much fantasy worldbuilding, authors fall back on existing prejudices rather than creating ones unique to their creations. This book is bold enough to create a world that moves beyond the prejudices we are still fighting in our real world.

Despite this departure, there is something familiar about Of Fire and Stars. It's reminiscent of the kinds of fantasy books I loved when I was a young teenager, tales of princess angst, horses, and the blossoming of reluctant love. There is a sweetness at the core of these stories; they offer us a sense of awakening and gentle adventure, and provide a more straightforward coming of age than we are usually offered in the real world.

My one regret for this book is that Denna and Mare spend most of it cooped up in a castle. It makes sense with the story's subtext — they're both beating their wings inside gilded cages. But they are a team that I long to see on the road, free to explore more of this intriguing world. I will definitely keep my eye out for a sequel, in eager hope that my wish will be granted.