Disney's 'Moana' Needs No Prince, Just The Land And Sea

Disney's 'Moana' Needs No Prince, Just The Land And Sea 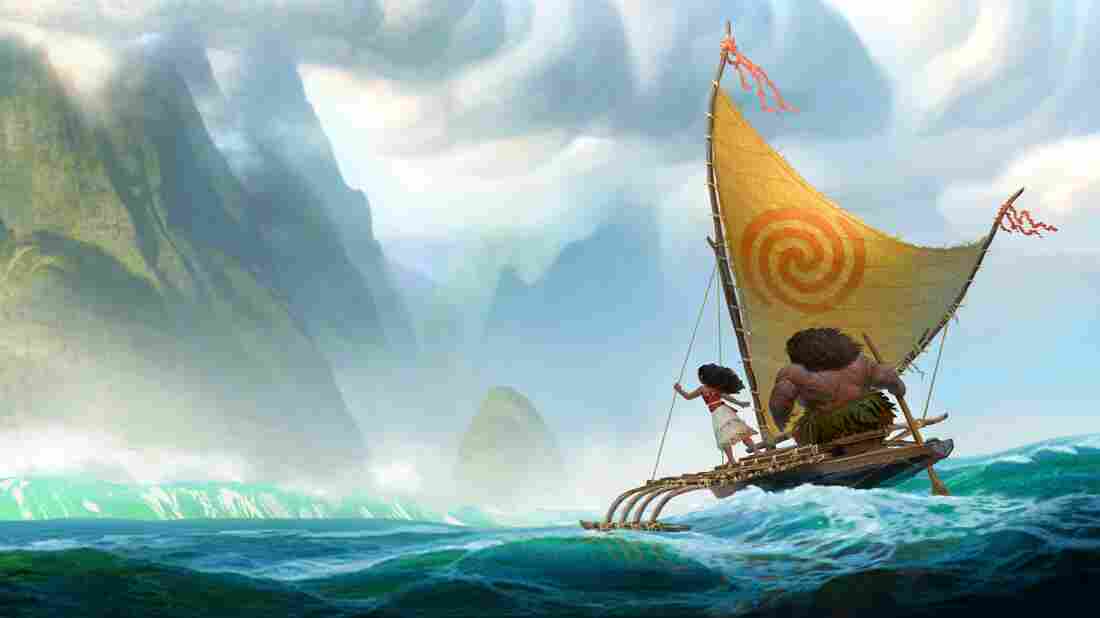 The animated Disney movie Moana is a comedy-adventure about a spirited teenager on a mission to fulfill her ancestors' quest. Walt Disney Studios hide caption 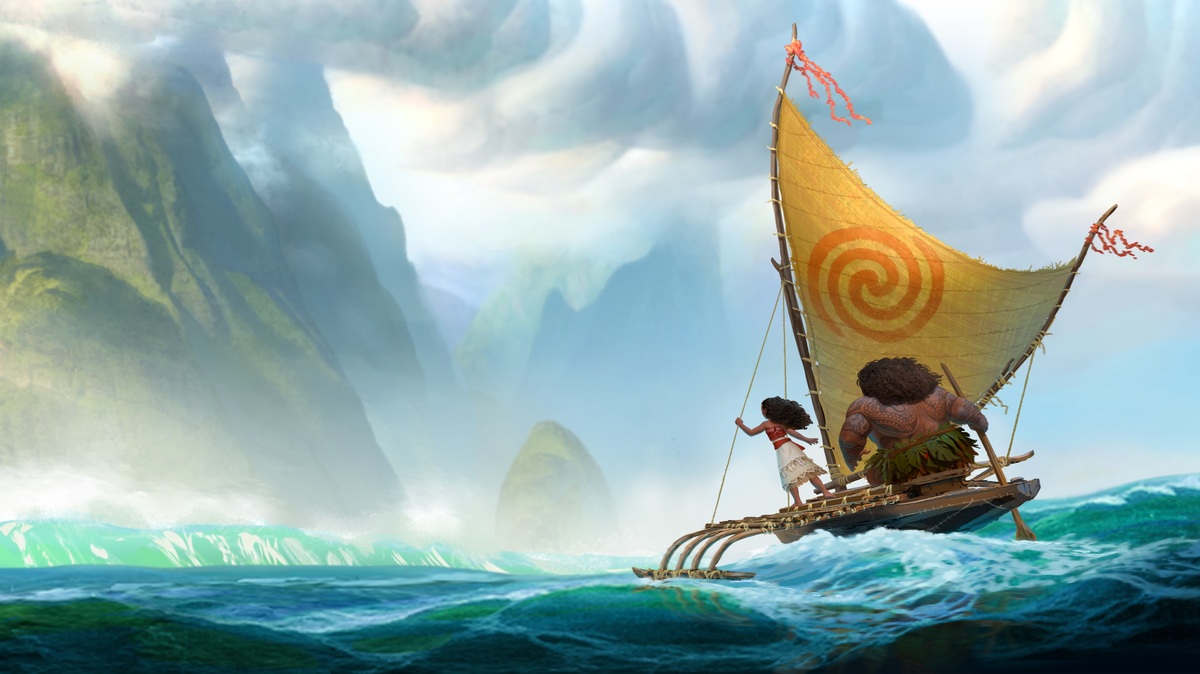 The animated Disney movie Moana is a comedy-adventure about a spirited teenager on a mission to fulfill her ancestors' quest.

You would be forgiven for getting so lost in the world of Moana that the story itself becomes merely a distant hum. Disney's newest animated extravaganza takes as its inspiration the crystal blue waves and lush green island mountains of Polynesia, making the landscape into a 3-D storybook. The computer animation, so much crisper and more vibrant than the all-white X-Y planes of Frozen, turns the film into a celebration of (bio)diversity. And not a moment too soon for a world that keeps needing to be reminded that this is all worth taking some effort to save.

Part of getting lost in Moana's world is honestly appreciating the culture at its center, as the film may be Disney's most committed effort yet to accurately depict the lifestyle of the setting its animators have parachuted into. The studio recruited Pacific Islander talent and researchers, which it deemed the "Oceanic Trust," to aid in its depiction of the region. So characters break into hula or war dances without needing to tell us what they're doing, and their natural, non-stagey interactions let us feel comfortable among them. The film achieves what the best Disney animated features do: a sense of place that is refined and specific.

Hamilton die-hards likely know Lin-Manuel Miranda co-wrote the original songs for the film with composer Mark Mancina, but the collaborator of arguably more importance is Opetaia Foa'i, the Samoa-born frontman to Oceanic fusion band Te Vaka. Foa'i's influence is the one felt harder on the resulting sound, which mixes ecstatic marching bass drums with the swooning melodies of tribal chants. When he trades vocals with Miranda to sing about exploring far-reaching territories on the rousing "We Know the Way," it's enough to make all budding wayfarers, young and old, grab a telescope and set sail.

Luckily, we have a surrogate to do all that adventuring for us, in the spunky preteen Moana (newcomer Auli'i Cravalho), the heir to her father's chiefdom on the fictional Motunui, a remote, isolationist South Pacific island. (She resents the title "princess," although one hopes she never stumbles across her own face in the Disney Princess marketing materials.) Moana dreams of setting sail for parts unknown, but dad (Temuera Morrison when speaking, and Miranda's fellow Hamilton hero Christopher Jackson when singing) keeps dragging her back to parts known, reminding her of her duties to watch over the island tribe and ensure its future.

Still, the ocean calls: "The water is mischievous / I like how it misbehaves," sings Moana's feisty grandma (Rachel House), who, with that lovely line, pushes her granddaughter to venture beyond her island's reef once the lackluster coconut harvest and fish depletion jeopardize the people's way of life. In fact, the ocean is literally beckoning Moana, as it's been anthropomorphized like the Disney sidekicks of yore, shooting jets of water for high-fives or to express annoyance.

But it's hard to imbue a wave, no matter how mischievous, with as much personality as, say, Dopey. So we're grateful once the film introduces a real foil, the trickster demigod Maui (voiced with puffed-up chest by Dwayne "The Rock" Johnson, People magazine's current Sexiest Demigod Alive). A mythical figure in Polynesian mythology, the Maui in this film has the build of a football player and the braggadocio of ... well, a football player. He's a shapeshifter who stole a trinket from Te Fiti's island god, thus dooming Moana's people; the girl's assignment is to drag the headstrong yet thin-skinned Maui back to right his wrong, tattoos and all (his body is covered in them, and they have minds of their own).

The story unfolds more or less in the same manner as Disney's other lone-journey films, like The Lion King and Hercules, and the soundtrack provides an easy road map: the introduction song, the yearning song, the goofy-personality song. (We can only hope Moana's numbers will peacefully fade onto Greatest Hits soundtracks before they turn on us like "Let It Go.") Ron Clements and John Musker, whose previous features include The Little Mermaid and The Princess and the Frog, were the driving forces behind Moana's vision. But they're still two of four credited directors and two of eight credited writers, like the committee-driven nature of all in-house Mouse House productions. Often that approach works, as in the excellent Zootopia earlier this year. But this story in particular seemed to demand a more idiosyncratic touch. Jemaine Clement as a giant crab who sings a Bowie-esque number about glitter is fun, but did it fit here?

Still, with all those names, the matter-of-fact way the film gets to treat its female protagonist is especially heartening. Her adversaries doubt her not because of her gender, but merely because of her youth; and she doesn't have or need a love interest, a fact that may not even register with you until after the film has ended. Well, that's not entirely true: Her love interest is the land and sea and its people, and anyone who sees Moana will become smitten, too.

A note on the preshow: Inner Workings is a suspiciously Inside Out-like short about an office drone's warring body parts. An overly cautious brain, situated inside the man's boxy head, prevents his impulsive heart from enjoying all of life's wonders, until an epiphany forces it to rethink its priorities. The film can't measure up to the visual or emotional wonder of Disney's similarly themed 2012 short Paperman, but director Leonard Matsuda still finds fascinating things to do with the animation form, particularly in the way he plays with geometric character models.

A previous version of this story incorrectly identified the main character's home island as Te Fiti. It is in fact Motonui; Te Fiti is the name of the goddess to whose home Moana journeys over the course of the film.