Accessibility links
For 'Moana' Actress Auli'i Cravalho, Demigod Maui Was The Stuff Of Bedtime Stories Hawaiian actress Auli'i Cravalho says she grew up hearing tales of Maui, the Polynesian demigod who could pull up islands with his magical fishhook. Now she stars alongside him in a new Disney movie. 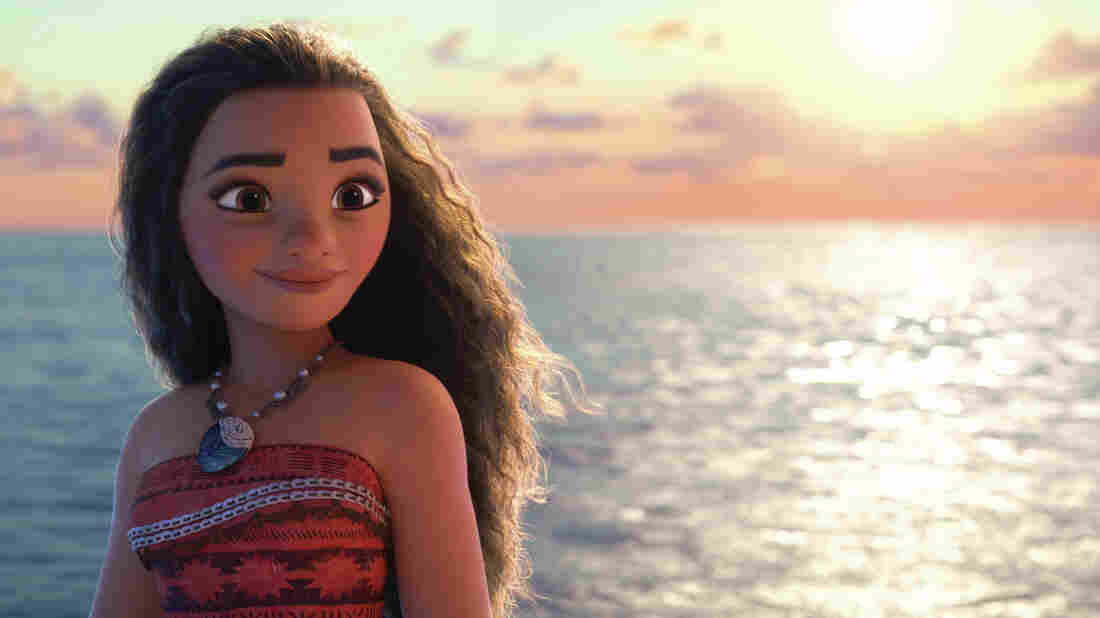 In Disney's Moana, a young girl (voiced by Auli'i Cravalho) enlists the help of the demigod Maui to save her people. Disney hide caption 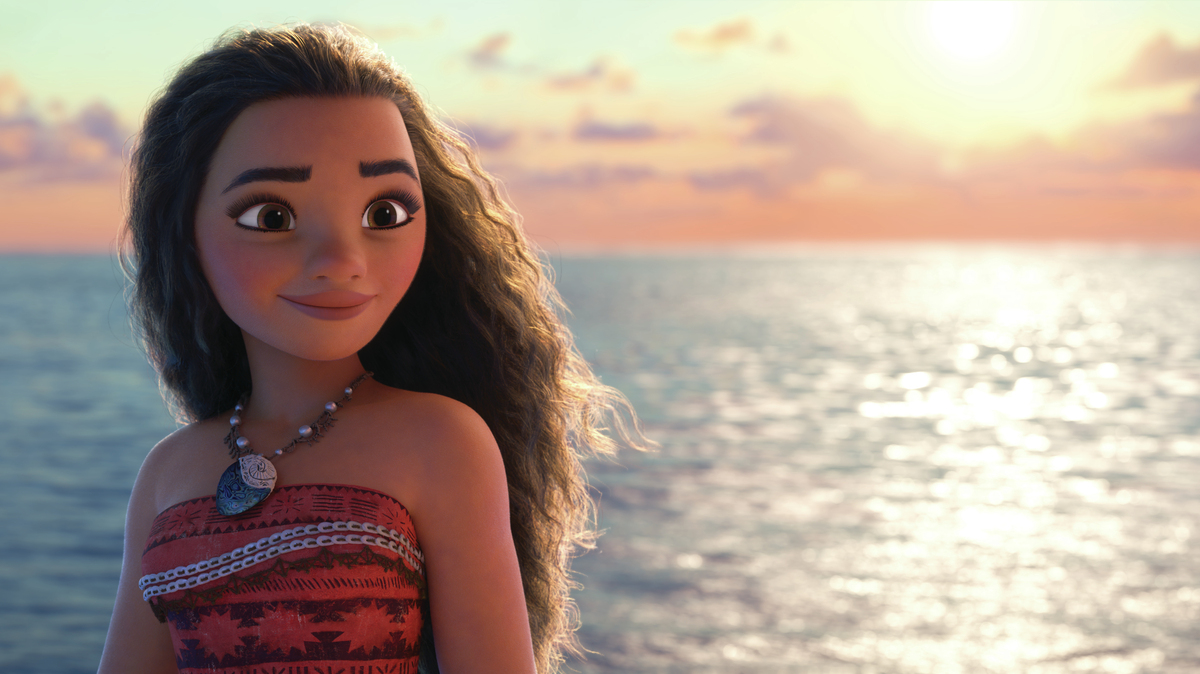 In Disney's Moana, a young girl (voiced by Auli'i Cravalho) enlists the help of the demigod Maui to save her people.

Disney's latest movie, Moana, tells the story of a young girl living on an island in the South Pacific. She's the daughter of the chief, which means she's supposed to lead her people and stay on the island, but she finds herself drawn to the sea. When coconuts start rotting and fish start dying, she sails out to save herself and her people by finding the demigod named Maui.

We heard a phrase when we were in the South Pacific: You don't own the land, the land owns you. And I think, you know, we sort of took that to heart.

"There's an imbalance between man and nature at the start of the film," says John Musker, who co-directed and co-wrote Moana. (His other film credits include The Little Mermaid, Aladdin and Hercules). Musker traveled around the South Pacific to research the film.

He tells NPR's Kelly McEvers that the story is in part about sustainability. "You've got to give back," he says, "... We heard a phrase when we were in the South Pacific: You don't own the land, the land owns you. And I think, you know, we sort of took that to heart."

Musker: My partner and I, Ron Clements ... we write and direct as a team. We did all those films [The Little Mermaid, Aladdin, Hercules] together and we were looking for a new film. And I had always been intrigued by the Pacific islands, having read novels by people like, you know, Joseph Conrad and Herman Melville. These, of course, are Westerners' points of view of the Pacific Islands, but it led me to read Polynesian mythology, which I never read. And I discovered what a rich vein of storytelling it was, and in particular this character of Maui, this demigod. He was known throughout the Pacific Islands and he was a shapeshifter. He had a mighty, magical fish hook with which he could pull up Islands, and he had tattoos, cool tattoos. ... And I was like: This person, this figure, he's ripe for animation — why has no one ever done this? ...

So we were forced — forced, I tell you — to go to Tahiti and to Fiji and to Samoa. ... It was a terribly tough job, but we took it on. 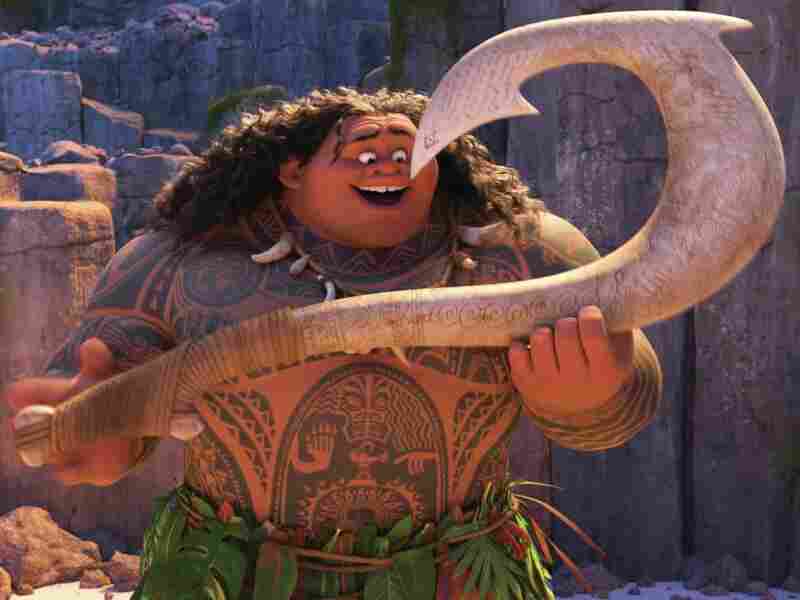 Maui (voiced by Dwayne "The Rock" Johnson) uses a magical fishhook to pull islands up out of the ocean. Disney hide caption 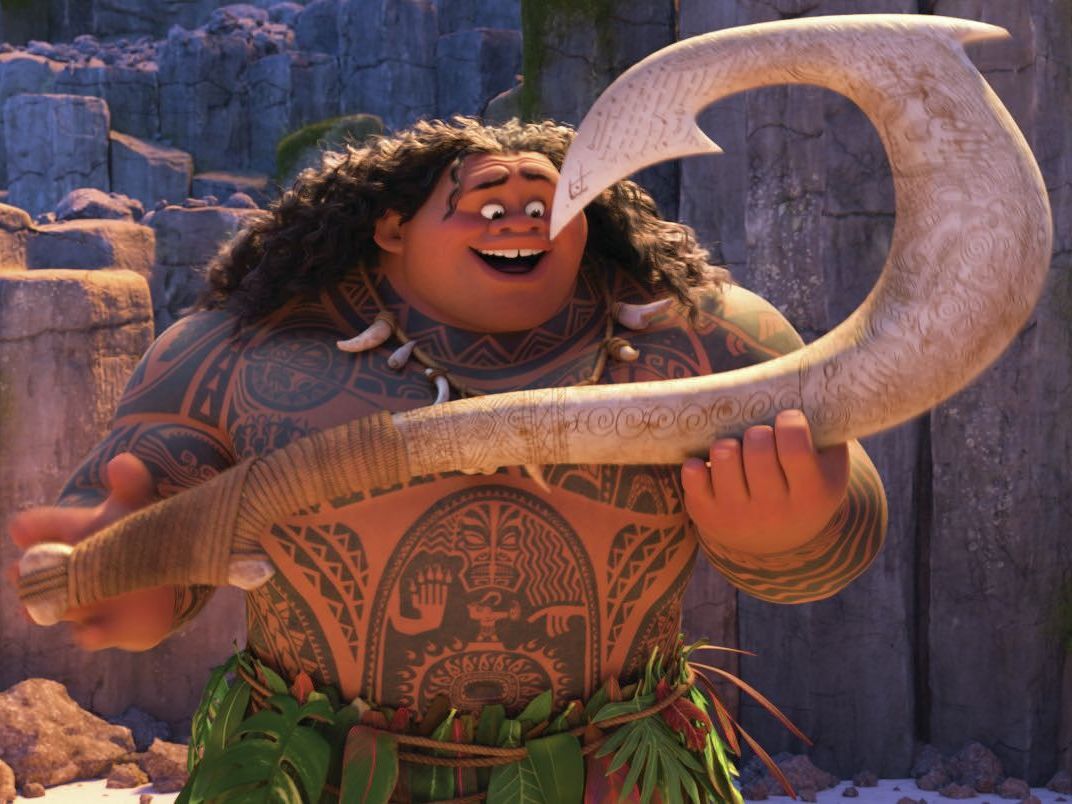 Maui (voiced by Dwayne "The Rock" Johnson) uses a magical fishhook to pull islands up out of the ocean.

On the role Maui played in Cravalho's childhood

Cravalho: I grew up with his mythology and those stories of him literally pulling islands out of the sea and slowing down the sun. Those were my bedtime stories. And it was really interesting being able to see those and to hear those in this story because, I mean, I know them, but the fact that the directors and the story team took that time to really find something true to my culture like that, that was incredible to me.

Musker: They used to be a voyaging society, which is based on the real fact. For thousands of years, there were great voyagers; and then there's a thousand-year pause where they didn't voyage. And then it was only after that that they went on to find Tahiti and then Hawaii and ultimately coming back around to New Zealand. That was sort of the last place, the migrations, that was settled. And so we thought we created this kind of fictional reason, this sort of fantasy reason, why they stopped and then why they started up again.

On the decision to combine many island cultures in one story

Musker: We had an Oceanic story trust. When we went to the islands, we met a great deal of anthropologists, linguists and choreographers and cultural ambassadors, and their advice to us was actually: It's best that you don't fix it to a certain place that it isn't exactly Samoa, it isn't exactly New Zealand, it isn't exactly Tahiti; that will give you more license to kind of combine these things. And it's sort of Pan-Pacific in a way, it really sort of marries these different cultures. So we deliberately wanted to be kind of inclusive of the Pacific.

Musker: One of the themes of the movie is identity: It's about really finding out who you are. And there is no romance in this movie, really, so it's a coming-of-age story, a hero's journey for this young girl. And in a way she's kind of finding that within herself and she's sort of reawakening the culture. ...

Cravalho: Something that I've seen hit, kind of, main media is that Moana doesn't have a love interest and OMG. But the main theme of Moana is the journey that she goes on. And I think that's something that everyone can relate to, perhaps not journeying 100 miles across the open ocean, but the journey of finding herself and really solidifying in who she is.

On the importance of depicting a strong female character like Moana

Cravalho: I think Disney films are reflective of their times. And I think in this day and age, especially, we need more heroes and heroines and we need more empowered young people who will journey out to, yes, figure out who they are, but also just journey because that's what they want to do. And, yes, ... her curly hair blowing in the wind and her athletic build makes her just fully ready to kick some butt. I think it's absolutely amazing. And she's a character that even I look up to as I'm going to be continuing in my junior year on to senior year [of high school]. And I hope that she inspires others as she's inspired me.