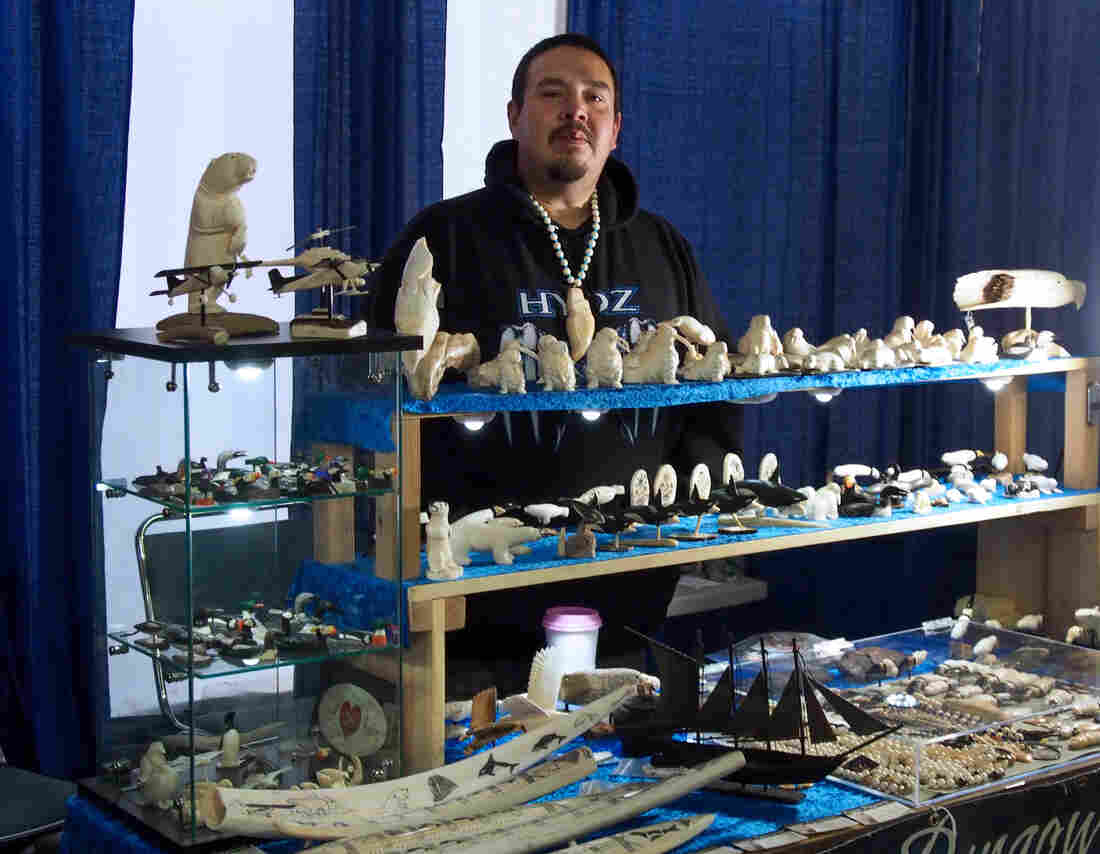 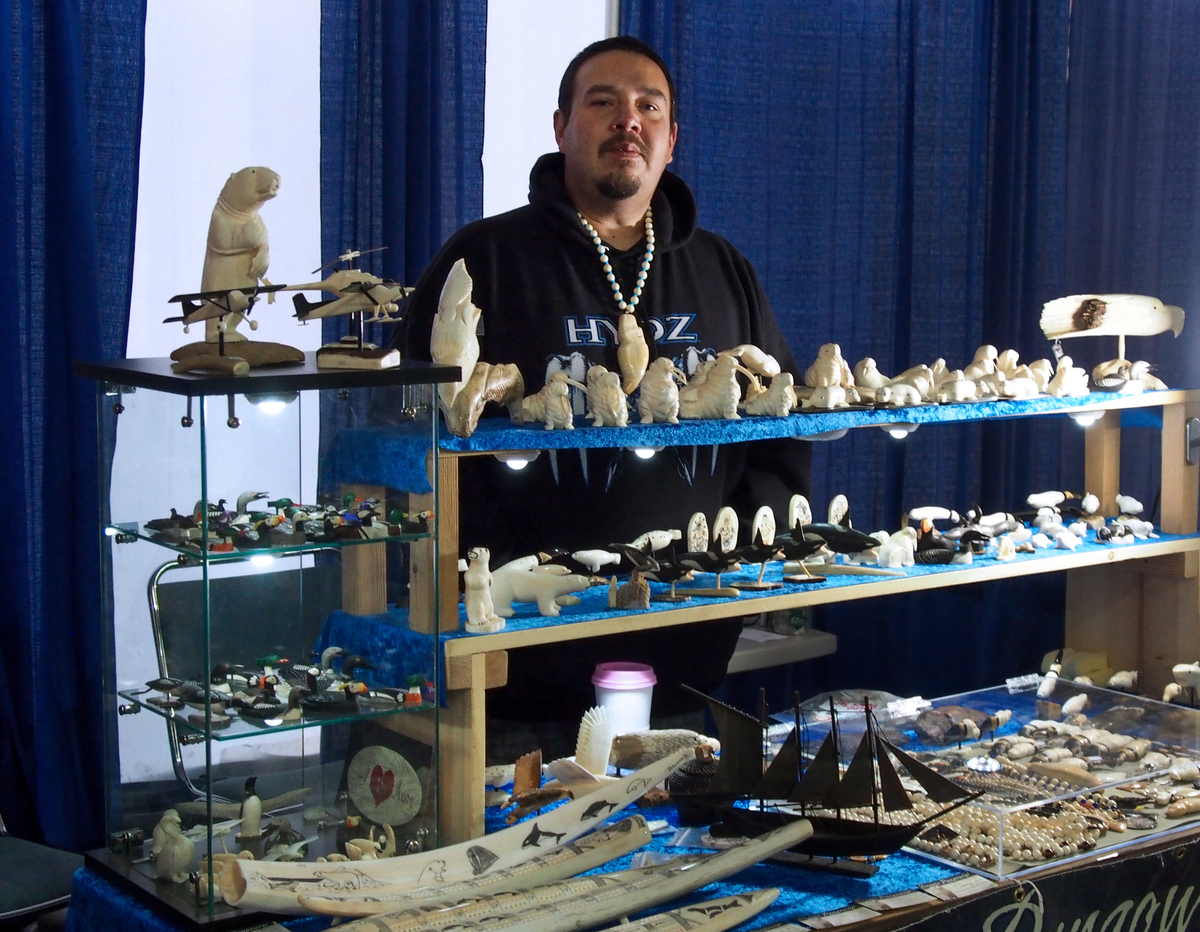 Dennis Pungowiyi sells his ivory carvings at a craft fair during the annual Alaska Federation of Natives conference.

Strict bans on ivory trade are aimed at preventing elephant poaching. But the state and federal measures are causing unintended consequences for Alaska Natives who legally hunt walruses and carve their tusks for a living.

Among dozens of tables at a recent craft fair in Fairbanks, Alaska, the glitter and gleam of Dennis Pungowiyi's ivory stands out. He has everything from small sculptures of birds to curved cribbage boards etched into tusks.

"I'm more well-known for my walruses," Pungowiyi says. "These bigger ones are from a 10-pound tusk, and I only get maybe two or three of those tusks a year."

Walruses aren't an endangered species and, under the Marine Mammal Protection Act, Alaska Natives are entitled to hunt them and sell byproducts such as whiskers, bones and ivory. Pungowiyi's family is from Savoonga, a community of about 700 people on St. Lawrence Island, which is between Alaska and Russia. The primary reason for the hunt is food, but the sale of tusks and carvings helps bring in cash.

"We've taken a pretty big hit on this elephant ivory ban. People are getting mistaken with it, with walrus ivory because they're not explaining and getting it out there," Pungowiyi says.

Since the summer, federal and state regulations cracking down on the domestic market for elephant ivory have caused people to think all ivory is illegal, he says.

"I'm down probably a good 40 percent," Pungowiyi says. "This show here is what I'm banking on to help get me through the winter."

Ivory isn't controversial in Alaska. It's commonly found as jewelry or decorations in homes. People know it comes from locally hunted walruses. But carvers depend on tourists and art dealers from the Lower 48 states buying goods.

Melanie Bahnke is president of a nonprofit in the Bering Strait region, where a lot of residents pay for essential goods like clothing and heating oil with ivory sales. She arranged a craft fair this summer when a luxury cruise ship docked in Nome, Alaska. But no one bought anything.

"Once they realized something was made out of ivory you could tell that there was almost disdain, a look of disdain," Bahnke says.

Ivory regulations in states such as California, Hawaii, New York and New Jersey have tightened recently, which has meant a drop in demand. Bahnke says ivory from Alaska isn't making it to market, and she and others worry that could be devastating to rural communities like Savoonga.

"It can be a huge part of a family's income — whether it's an $80 carving or an $8,000 carving," Bahnke says. "When our communities are already living below poverty, that's a big source of income for our people."

Elly Pepper of the Natural Resources Defense Council helped lobby state legislatures on their recent ivory bans. She says it is tricky to stamp out demand for elephant products without harming the livelihoods of walrus hunters in Alaska.

"I think most people have tried to make it pretty specific to elephant ivory, but I think ... the messaging has maybe been conflated," Pepper says. "We respect the rights of Native Alaskans to use wildlife for subsistence purposes, and ... these bills were not intended to obstruct that."

There's no quick and accurate scientific test to distinguish elephant ivory from walrus ivory. And even if there were, many people in Alaska are scared it may be too late to undo misperceptions. At his craft fair table in Fairbanks, Pungowiyi says it's a tragedy that conservation of elephants is jeopardizing the traditions and livelihoods of Alaska Natives.

"The locals, Alaskans, they know pretty much that it's legal, but the people that are coming from Seattle, California, from out of state — they come here and people are telling them ivory is illegal," Pungowiyi says. "For an example, I sell to this gift shop in Anchorage in the summertime, and normally I sell five to 10 walruses a week there, all summer long, and I sold maybe 10 walruses there this summer. So it's been a drastic hit on us this summer."

Pungowiyi says now he'll have to focus more on private commissions to make a living.