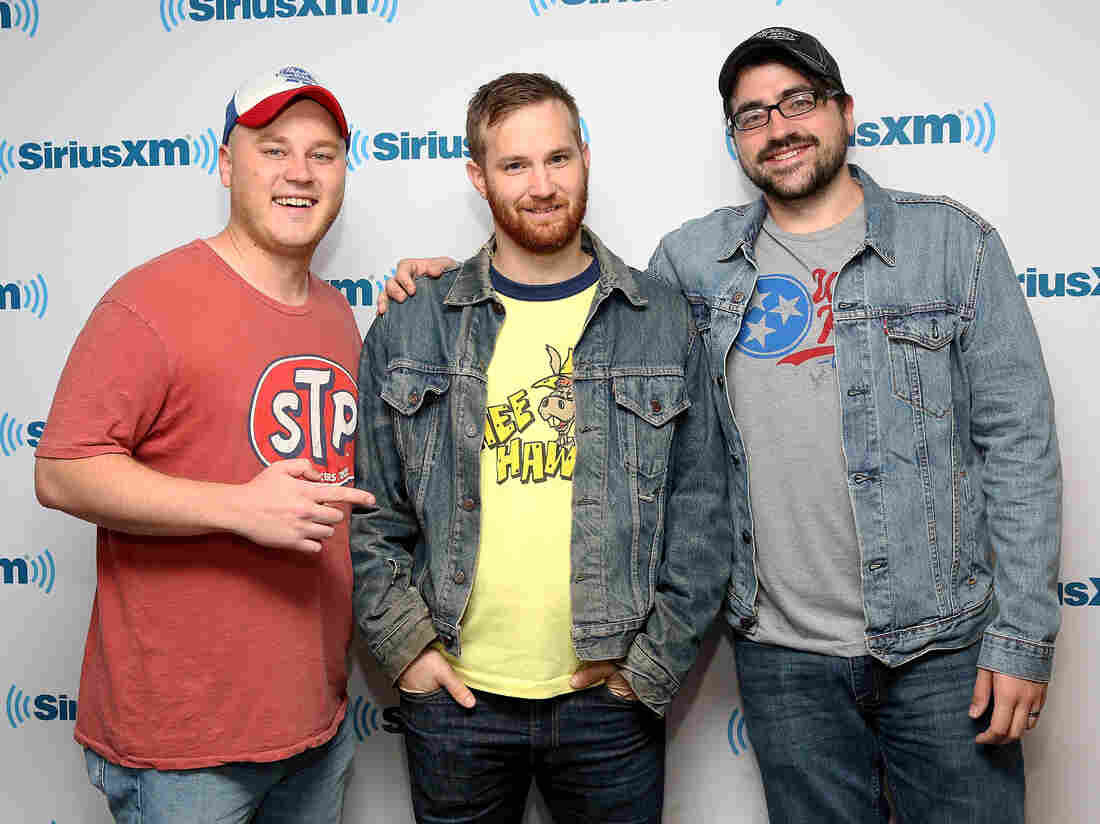 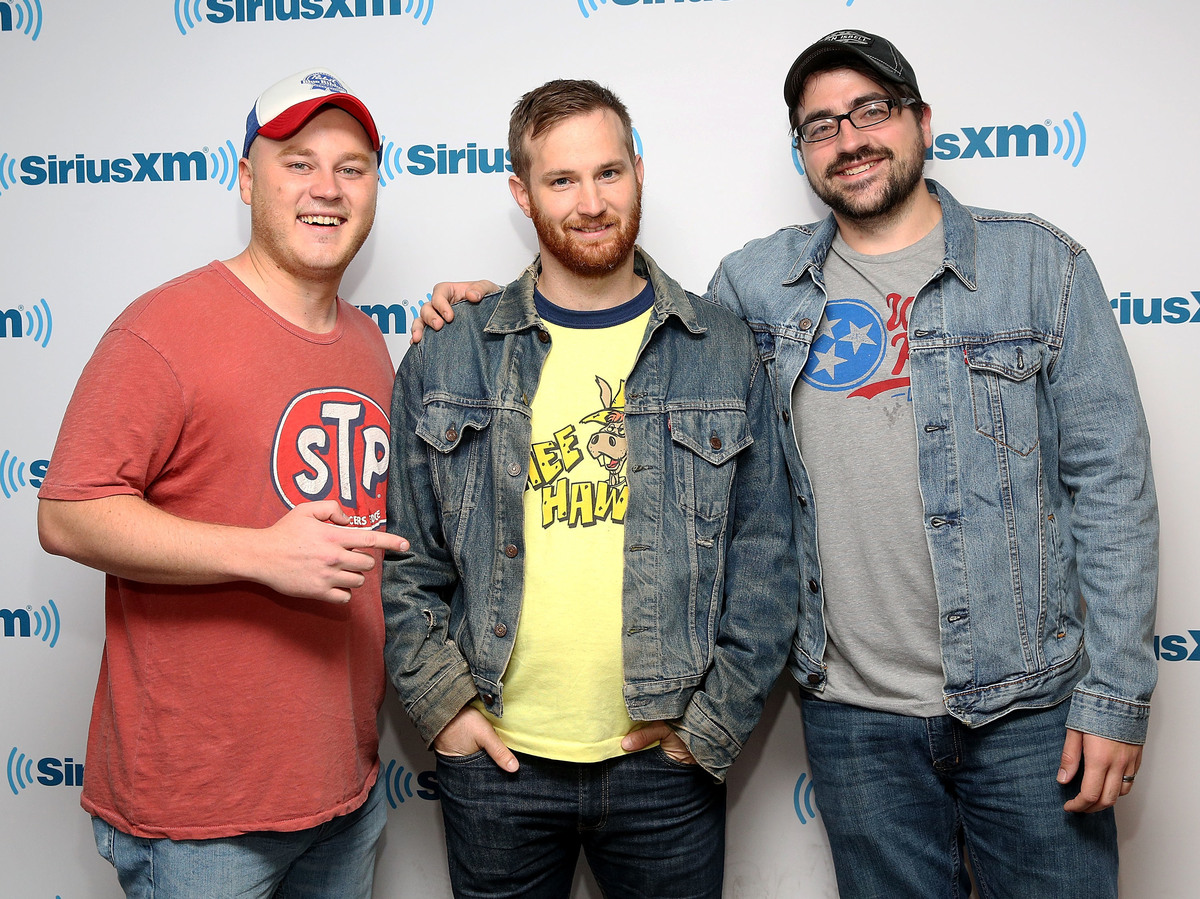 Corey Ryan Forrester, Drew Morgan and Trae Crowder write and perform together. They wrote a book called The Liberal Redneck Manifesto, which challenges what readers might expect from Southern comedy.

Editor's note: This story contains links to Facebook posts and videos that contain language that some may find offensive.

Trae Crowder, until recently, was a little-known stand-up comic with an idea for a Web series. He would call it, "The Liberal Redneck," and he'd do liberal rants in his strong Tennessee accent, while wearing a camouflage hunting cap and a cutoff T-shirt. But he thought he needed an expensive camera and high production values to get the series to take off. And that just wasn't in his budget.

Then Crowder saw a video on Facebook of a guy standing next to his pickup truck that had been shot with nothing more than a cellphone. The man who posted it was Pastor Andrew Green, an evangelical minister who said he was offended by the idea of his daughter sharing a bathroom with a transgender woman. His video got 15 million views.

"Make no mistake about it, if I catch a man in the bathroom with my girl, it's gonna be a problem," said Green in a fierce tone. "That's even more reason why we should stand up for our Second Amendment, because there's gonna be a bunch of perverts using this thing to go into bathrooms [and] peek at little girls."

"If that right there is what I'm trying to parody," Crowder said, "I don't need any of that [high-end production equipment]. I can do exactly what he's doing ... only make it funny."

A few days later, Crowder posted what is his most famous video. It was set on his back porch in Tennessee. Crowder, wearing a baseball cap but no shirt, let loose against what he saw as the closed mindedness of so-called bathroom bills — laws that seek to regulate which bathrooms transgender people can use.

The video got more than 20 million views and "The Liberal Redneck" was born.

His following is huge, but it isn't built on shock value or shtick. He's doing something almost entirely unheard of in mainstream comedy: making a big deal out of his "Southern-ness" and his progressive values.

"Yeah, I'm a white trash, trailer baby from the deep South," Crowder said. "But I'm also educated, agnostic, well-read, cultured. I'm [all] of those things at the same time and if you can't reconcile those things in your head, that's your problem."

Three is not a crowd

Crowder isn't the only comic doing progressive Southern comedy. I met him back in July at the DC Improv club, where he appeared with two other comics, Corey Forrester and Drew Morgan. The three have been doing comedy together for the past six years. They recently collaborated on a book, The Liberal Redneck Manifesto: Draggin' Dixie out of the Dark.

"Our whole thing has always been, all right we're gonna bust our ass, we're gonna write this [or that] and one of us is gonna make it and they'll take the other two along," said Forrester, laughing. "Just never in a million years did we think it would be Trae."

On stage, Forrester told the DC Improv audience a story about his hometown's annual Civil War re-enactment. You can see how his comedy doesn't just rely on cliches.

"You cannot even pump gas in the town on this day without having someone in a full-burred Confederate costume walking by you with a musket going, 'What is that strange liquid you're putting in that horseless carriage? I've never seen anything like it in my life,' " said Forrester. "I'm like, 'Bill this is your gas station. You own it! You took the day off to be racist!' "

The online success of "The Liberal Redneck" has skyrocketed all three comics' careers. They've been touring the country for months, and just weeks before I met them both Crowder and Morgan quit their day jobs. Thanks to what Morgan refers to as the "sleeveless coattails' tour," he was able to stop working as a document-review lawyer. Crowder had been a federal contract negotiator and Forrester was already working exclusively as a stand-up comic.

Crowder and Morgan became friends years earlier at an open mic night when they realized they had a shared, but very peculiar, Southern experience. Both had been valedictorians of their small town Tennessee high schools. Morgan was an all-state quarterback.

Crowder said he was "seriously treated like Good Will Hunting, like a prodigy or something. And so I left thinking that's the way I was. We both had to come to terms with a lot of s***."

Even though Crowder eventually realized he wasn't as smart as he thought he was, he says, his perception that he was a prodigy back then influences the way he rails against Southern conservatism today.

Yeah, I'm a white trash, trailer baby from the deep South. But I'm also educated, agnostic, well-read, cultured. I'm [all] of those things at the same time, and if you can't reconcile those things in your head, that's your problem.

"This is gonna sound really terrible," said Crowder. "But because that's the way it was from a very young age, I never really concerned myself with the opinions of other people. Like I knew they might not agree with me, but in my head I was like, 'well I'm Good Will Hunting and they're not. ... They're just wrong.'"

Morgan, who now lives in New York City, says he misses his days living in the South. Being liberal was like being punk, he says.

He and many of his family members, for instance, disagree about climate change. He talked about it in a bit at the DC Improv, setting up a mock scenario where a reporter is interviewing a woman in the Midwest, which has recently become waterfront property.

"Climate change?" Morgan asks, speaking in a high voice, imitating the woman. "Honey, this was God's will. I've been asking him to kill all the liberals and the queers on the coast for 20 years and he finally listened!"

After getting his laughs, Morgan adds, "I'll tell my me-maw y'all like her."

Embracing this paradox, of loving the South, while also being horrified by it, is exactly what makes these comedians so different than the ones that have come before them. Larry the Cable Guy, played by Daniel Whitney, met with great success as part of the Blue Collar Comedy tour and for his catch-phrase "git-r-done." But he played to type.

Mentioning The Cable Guy elicited groans from Crowder, Morgan and Forrester, who call their act the "WellRED Comedy Tour." However, when talk moved to Jeff Foxworthy, Whitney's Blue Collar tour mate, they were all quick to show respect. Forrester even called him "a god."

Foxworthy is known for plain talk and common sense. But he is not beyond using stereotypes for easy laughs. In one well-known joke he tells the audience, "If you've ever gone to a family reunion to meet women ... You might be a redneck!" Sometimes he even adds, "I think we offended somebody out here. That ain't funny, is it Sis?"

"I'm not trying to wage war on Jeff Foxworthy," said Crowder. "But I do think we are trying to do a different kind of explicitly Southern comedy."

The WellRED guys don't demean Southerners for simply being rednecks but they don't apologize for, or let slide, what they see as hypocrisy and bigotry. They want to show the rest of the country that the South is not one big red conservative blob of dumb racists. But Crowder also has a message for conservative Southerners.

"The rest of us are trying to ensure that the next generation grows up in a world that's a little more open minded," as he said in his first viral video. "And that's happening, whether you like it or not."