Accessibility links
In Montana, An Unease Over Extremist Views Moving Out Of The Woods Into The Mainstream The remote woods of the Northwest have long been a haven for far-right extremists. After Donald Trump's election, some in communities here worry about extremists entering the mainstream. 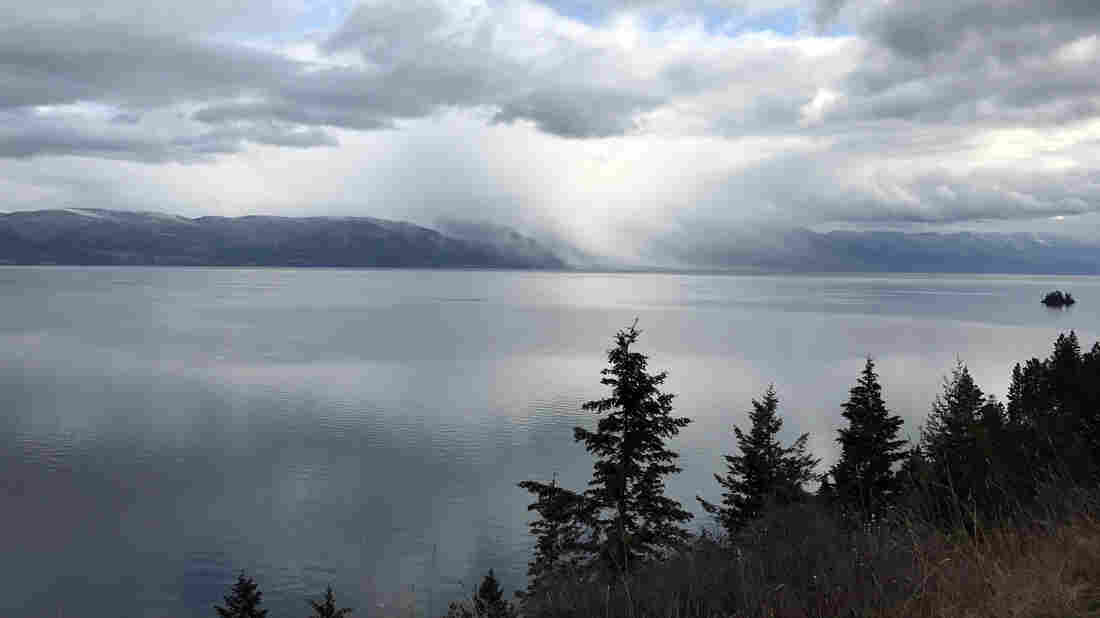 Flathead Lake in Montana's Flathead Valley is fed by the glaciers in Glacier National Park. Here in rural northwest Montana, there is postelection unease in some communities about far-right extremist views entering the mainstream. Kirk Siegler/NPR hide caption 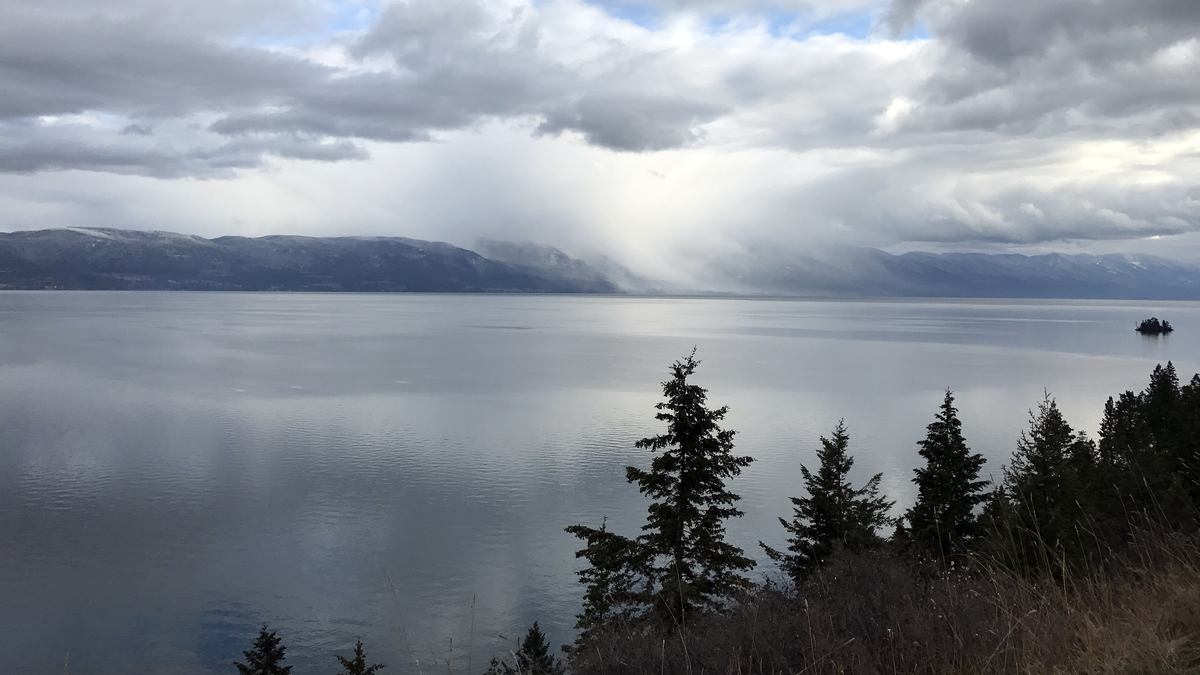 Flathead Lake in Montana's Flathead Valley is fed by the glaciers in Glacier National Park. Here in rural northwest Montana, there is postelection unease in some communities about far-right extremist views entering the mainstream.

The day after the election, Jen Stebbins-Han's kids came home from school and posed a question that before this year, she says, she might have laughed off.

"My kids came home and asked us if their dad was going to be deported," she says. "I don't know where they heard that because it wasn't from us."

"There is a part of me that's afraid because I don't know what somebody's going to do because they feel emboldened to be able to," she says.

Stebbins-Han grew up in northwest Montana's Flathead Valley, a pristine area wedged between the snow-capped mountains of Glacier National Park and the glacier-fed Flathead Lake.

Like a lot of people here with the means, she moved away as a young adult. Five years ago, she returned with her husband so he could take over her dad's orthodontist practice. The couple's kids go to the same little country school Jen and her father and grandfather attended.

But she says the valley she came back to seems different now.

"What I've noticed is ... I didn't realize how OK with blatant racism so many people are," Stebbins-Han says. 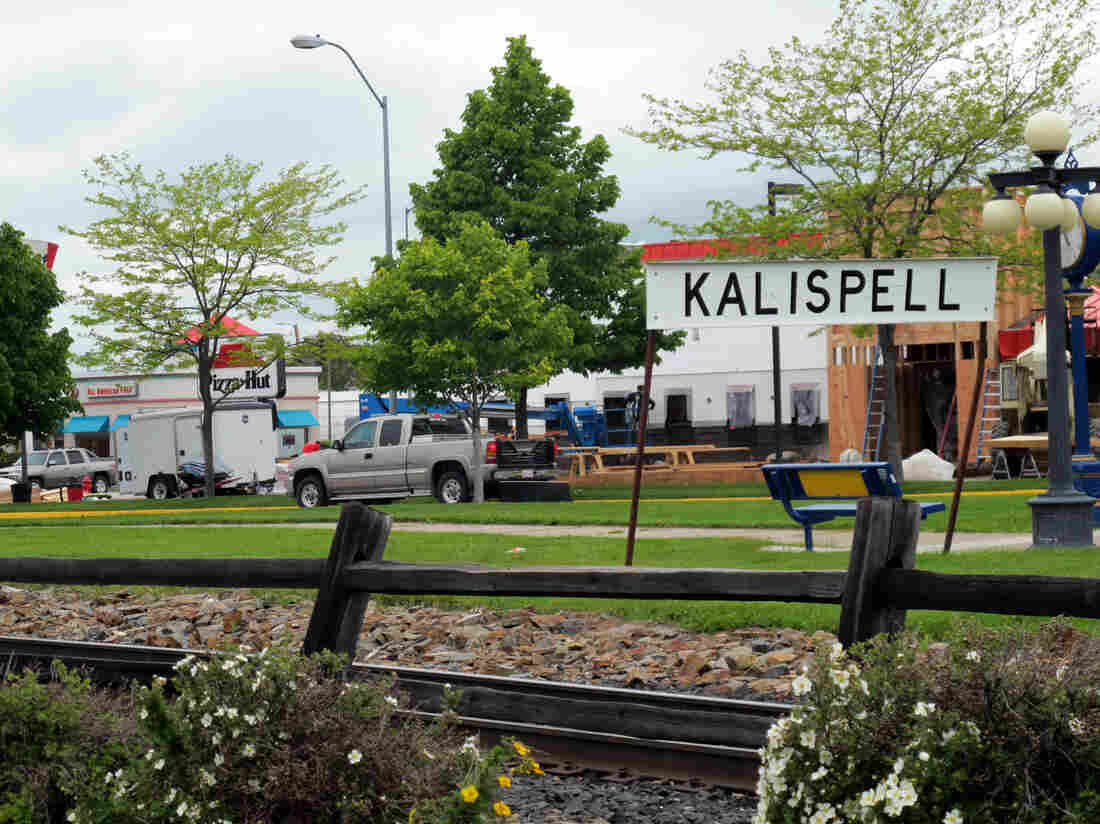 A sign near an old railroad station is shown in Kalispell, Mont., in 2011. In rural northwest Montana, controversy erupted in 2010 when a white supremacist group calling itself Kalispell Pioneer Little Europe began screening Holocaust denial films at the library in Kalispell. Nicholas K. Geranios/AP hide caption 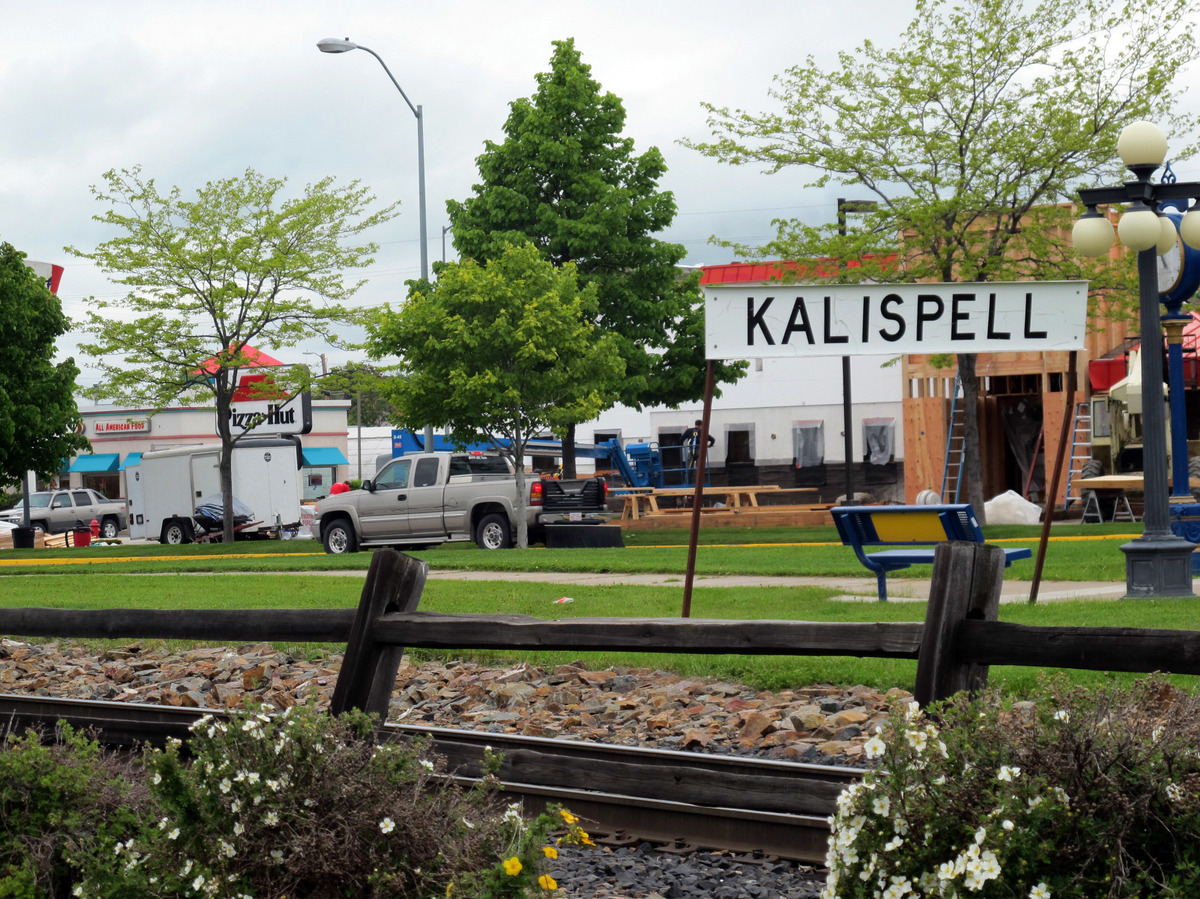 A sign near an old railroad station is shown in Kalispell, Mont., in 2011. In rural northwest Montana, controversy erupted in 2010 when a white supremacist group calling itself Kalispell Pioneer Little Europe began screening Holocaust denial films at the library in Kalispell.

A move to the right

'We're Not Going Away': Alt-Right Leader On Voice In Trump Administration

Long before the 2016 election, rural northwest Montana had a reputation as a haven for anti-government extremists and white supremacists. According to numerous interviews with longtime locals, this used to get shrugged off. These were the fringe types, the locals said, holed up in remote cabins in the woods of northwest Montana and the Idaho panhandle.

Then things started bubbling up to the surface. Controversy erupted in 2010 when a group calling itself Kalispell Pioneer Little Europe began screening Holocaust denial films at the library in Kalispell, Flathead Valley's largest city. Then, white nationalist leader Richard Spencer moved to the lakeside resort town of Whitefish.

"The impression that I get from the people that I talk to is that nobody wants them here. Everybody would rather not be known for this," Stebbins-Han says. "But at the same time they're put up with and maybe even listened to a lot more than I would like."

That is the tension. After the election, some of these groups' arrivals into the mainstream of American politics are cause for unease in the valley. Local conservatives distance themselves from these outside extremist groups moving in. But northwest Montana has also been trending deep red in recent years, especially as several of this area's timber mills and manufacturing plants closed.

On rural highways, bumper stickers mocking President Obama are common, and so are the billboards listing the Ten Commandments. Instead of the usual classic rock or country, the radio is now dominated by Christian and conservative stations.

This trend toward the far-right in politics has local activists like Taylor Rose excited.

"I describe it as a re-emergence of populist nationalism," he says.

Rose is talking local and national politics on a frigid morning over coffee at a City Brew. The bustling local chain sits along a busy highway lined with shiny new big-box stores that cater to thrifty Canadians who drive down to the valley to shop.

"We have our heritage, we have our values, and we should take pride in that," Rose says. "And if you come to this country and want to be a citizen of this republic, you have to assimilate."

Rose is 29. His longish blond hair is parted down the middle. He's wearing a North Face T-shirt. He ran for the state Legislature this year as a Republican and lost, but not by much.

He's quick to say his views are not xenophobic, rather just protectionist.

"We should reject things that are antithetical to our way of life, that are enshrined in our ancient Anglosphere heritage that we have inherited from the British," Rose says.

Rose's parents divorced when he was little, so he grew up splitting time between the Flathead and Oregon. Locally, he's eager to see whether Trump will get the loggers back in the forests.

"To help this valley out, the best thing that Donald Trump could do is to get the federal government out of our way so that we could allow our industries to thrive," Rose says.

To be clear, the Flathead Valley, with its resorts and its famous national park, is quite prosperous compared with a lot of Montana, especially the state's remote eastern plains. The unemployment rate is 5.1 percent, slightly higher than the state average of 4.3 percent here, but there are still jobs. It's just that people like Rose want to see the area go back to an economy that had fewer regulations and relied more on natural resources.

"Not a very diverse community"

While the Flathead Valley has trended red recently, it's also known for its fierce libertarianism. Groups like the Southern Poverty Law Center and the Montana Human Rights Network warn that the region's "live and let live" mentality is one of the reasons why far-right extremist groups are drawn here and in some cases thrive here.

Another reason is demographics; Flathead County is nearly 100 percent white. It's a fact not lost on Will Randall, who grew up and raised his family here. Today he's a carpenter specializing in building higher-end homes.

When Spencer relocated to Whitefish, Randall and his neighbors pressed the city council to ban him from doing business. They ended up getting an anti-discrimination ordinance passed. Since the election, Randall says he has tracked an increase in hate speech incidents in local schools.

A group of teenagers who paraded through town with Confederate flags on their pickups also ignited controversy.

Still, some here think things are getting overblown in the wake of a divisive election.

At Whitefish Handcrafted Spirits, one of the latest hip hangouts to open in the upscale resort town, Rebecca Moreno is polishing tumbler glasses, getting ready for her shift tending bar.

"I work in this bar, I see a lot of people, a lot of locals, and I've never once been bothered or threatened. I mean, I'm clearly Mexican," she says, laughing.

Moreno moved to Whitefish two years ago from Southern California. She also voted for Trump. She says she's not afraid even if the more extreme elements of the far right are becoming mainstream.

"I know that we are going to be OK," Moreno says. "If they were to come out and be more violent, that's why I want to encourage more people to take action and learn how to protect themselves."

Protect themselves, she says, with their Second Amendment rights. It's the main reason she voted for the president-elect.