Accessibility links
Steve Mnuchin, Contender For Trump Treasury Secretary, Headed 'Foreclosure Machine' During the financial crisis Steve Mnuchin was working to make profits from the ruins of the housing bust. He assembled investors who bought IndyMac, a failed bank that had been taken over by the FDIC. 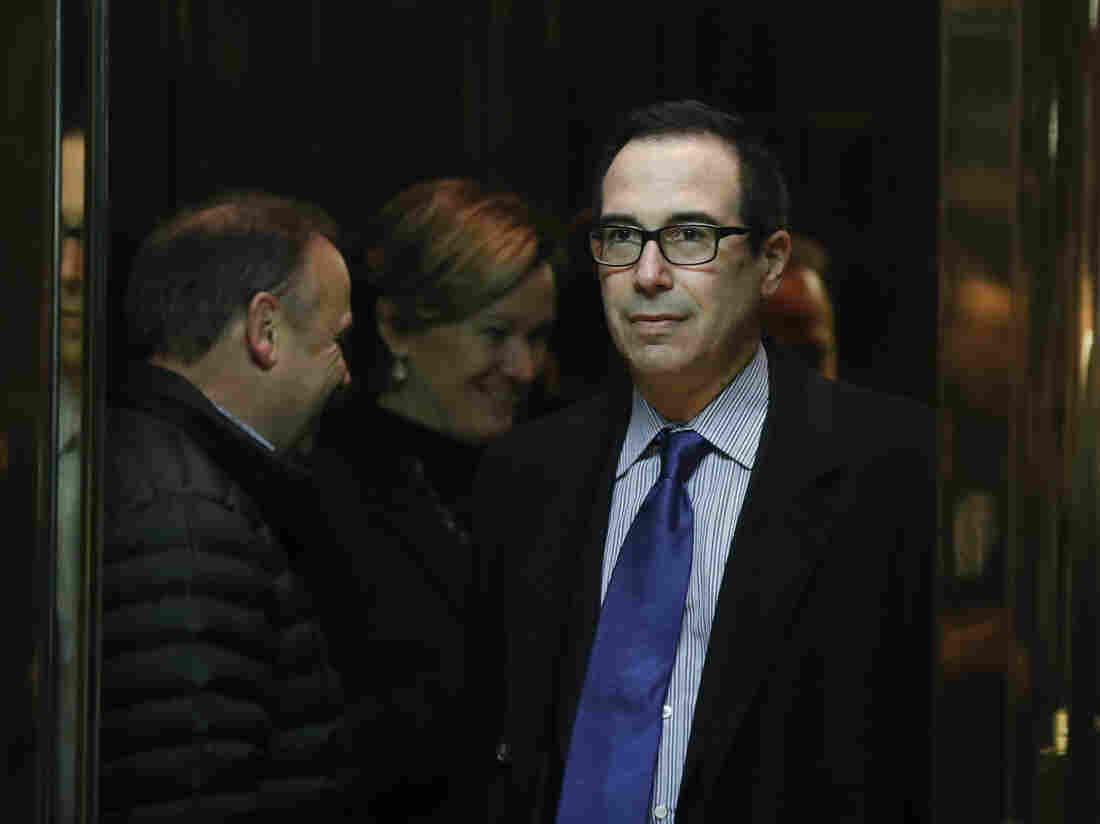 Wall Street financier Steve Mnuchin is being considered to serve as Treasury secretary under Donald Trump. Mnuchin assembled investors who bought IndyMac, a failed bank that had been taken over by the FDIC. Carolyn Kaster/AP hide caption 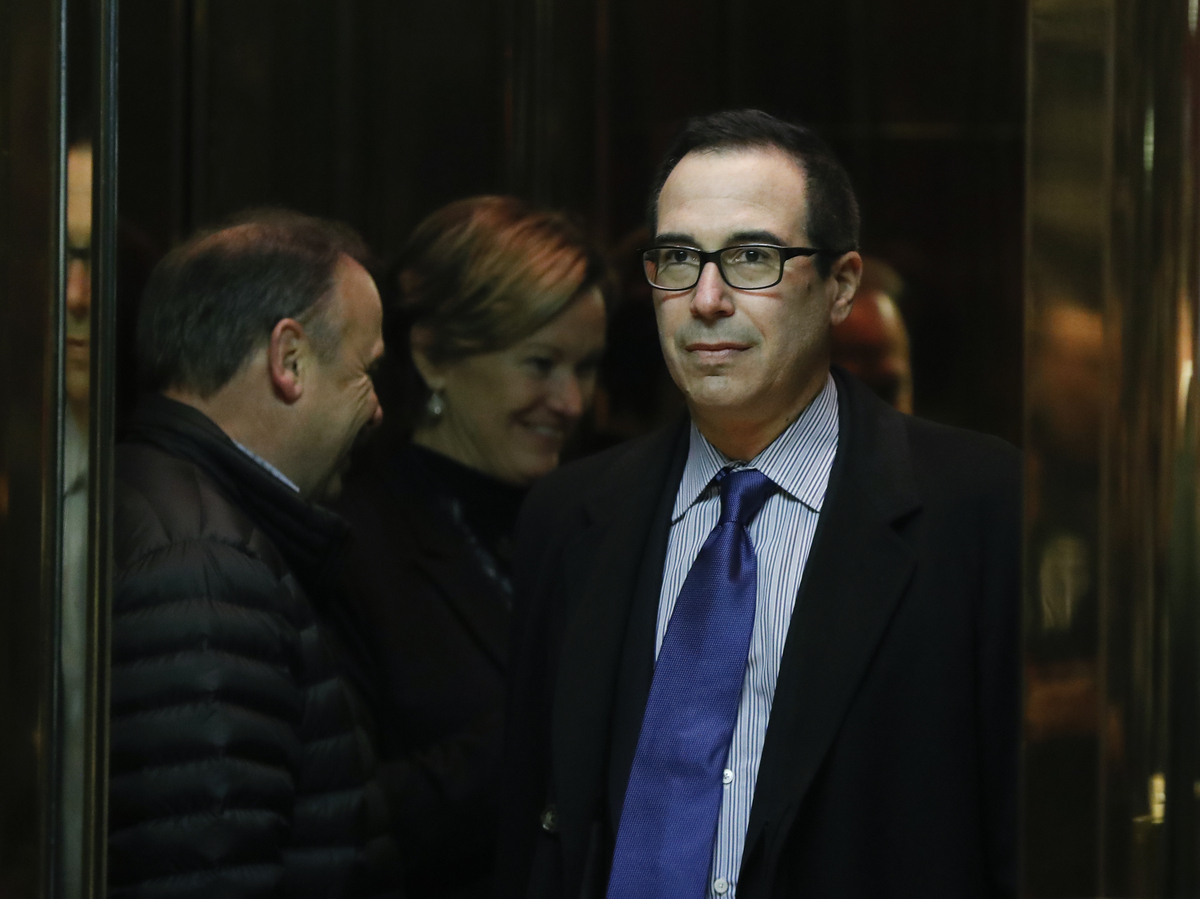 Wall Street financier Steve Mnuchin is being considered to serve as Treasury secretary under Donald Trump. Mnuchin assembled investors who bought IndyMac, a failed bank that had been taken over by the FDIC.

After campaigning with lots of populist and anti-Wall Street rhetoric, Donald Trump is seriously considering a veteran Wall Street financier, Steve Mnuchin, to be his Treasury secretary.

But Mnuchin's resume also includes a stint as chairman and CEO of a California bank that's been called a foreclosure machine.

During the depths of the financial crisis, Mnuchin was looking to make profits from the ruins of the housing bust. In 2009, he put together a group of billionaire investors and bought a failed California-based bank, IndyMac. It had been taken over by the Federal Deposit Insurance Corp. after its sketchy mortgage loans went bad.

Mnuchin and his partners bought IndyMac on the condition that the FDIC agree to pay future losses above a certain threshold. They renamed the bank OneWest Bank and, after running it for six years, they sold it last year for a profit, estimated at close to $1.5 billion.

Kevin Stein of the California Reinvestment Coalition, a housing advocacy group, says that profit was made on the backs of suffering California homeowners. "In essence what they did is they bought a foreclosure machine," he says.

Shaping Trumponomics: These Names Are Being Floated For Cabinet Posts

According to the coalition, OneWest foreclosed on more than 36,000 homeowners under Mnuchin. During that time, the FDIC made payments to OneWest totaling more $1 billion. Those payments went to the "billionaire investors of OneWest Bank," says Stein, "to cover the cost of foreclosing on working-class, everyday, American folks," many of whom lived in California.

Rex Schaffer, 86, and his wife Rose were among those who lost their homes, in a OneWest foreclosure. After living nearly 50 years in their home in La Puente, Calif., the Schaffers took a home equity loan but struggled to make the payments. They say they qualified three times for a government assisted modification, but OneWest failed to modify the loan.

"It was a disaster dealing with those people," Rex Shaffer says. "We'd have a different person every time we called in." He counted 33 OneWest employees, in all, and each one would give him "a different story."

Facing threats that their home would be auctioned off, the Schaffers finally got through to a OneWest vice president. According to Rex Shaffer, the VP said, "I'm going to get you a 60-day extension on the sale date, so we can work this thing out." That was on Feb. 17, 2011. But the next day, the Schaffers' house was sold without their knowledge. "We didn't even know it — didn't have the faintest idea," Rex Shaffer says.

They voted for Donald Trump, but Rose Schaffer says they're praying he doesn't choose Mnuchin as his Treasury secretary. "If he can't run his own little bank," she asks, "how can he handle a large thing for the United States?"

Millions of Americans were foreclosed on after the financial crisis; some were duped by real estate agents and bankers, others took imprudent risks.

It is important to note that Mnuchin and his partners bought a bank from the government that was already in trouble because of bad loans. But Stein, of the California Reinvestment Coalition, argues that Trump's message was that his presidency would rescue working families and the forgotten middle class. Stein says Mnuchin's actions run counter to the message.

"Mr. Mnuchin oversaw a bank that created difficulties and financial ruin for tens of thousands of families," Stein says. Stein and his organization have also charged that, under Mnuchin, OneWest illegally avoided serving minority communities in California.

Despite NPR's repeated requests for comment, Mnuchin did not provide a response.