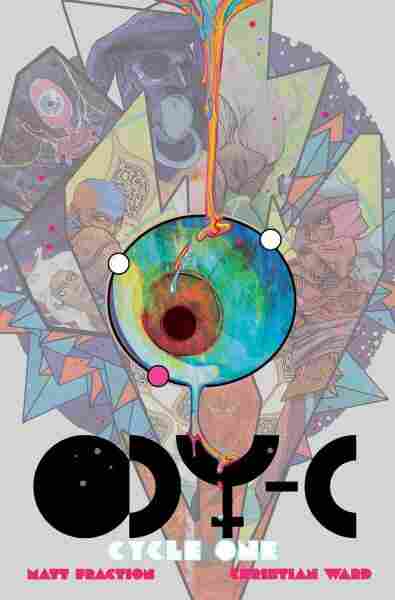 by Matt Fraction and Christian Ward

Odysseus was the man of many minds and many ways, according to his Homeric epithets. And among the many minds of Odysseus, there's room for a space queen.

Odyssia is warlike, merciless, "witchjack and wanderer," "starminded," '"wolfclever," "lightspeed," a "wolfwitch." Written by Matt Fraction and illustrated by Christian Ward, ODY-C is a beautifully colored space Odyssey, both graphic and novel, which makes Homer new.

The war against Troiia lasted a century; Paris stole the man He [Helen] from Ene [Menelaus], and, in return, the heroes Odyssia, Ene, and Gamem [Agamemnon] conquered Troiia with a trick. Battered but victorious, Odyssia now turns homewards in her C-shaped ship, to Ithicaa. But the gods — here, goddesses — keep her circling the galaxy instead, fighting strange beasts and strange women. The Cyclops is rendered with a massive eye and cascading breasts like the famous many-breasted Ephesian Artemis. The Lotus-eaters are wraith women who smoke the plant and sink into sinister stoned passivity. Aeolus is a planet ruler who tosses women who don't bear him sons into space.

In the world of ODY-C, most of the men are dead, killed by Hera so children aren't born to threaten her rule. The gods and heroes are warrior women, not the disposable sylph-shapes with impossible waists familiar from classic comic books. Spectacular, powerful, muscled warriors with flowing hair, they are flawed and they are merciless. The rape of women in myth is constant. That is true in these stories, too. But the moral, this time, is different: "You reap what you sow, motherf-----."

ODY-C has the excess, grandeur, violence, and strangeness of the original, rendered in saturated, flowing colors by Ward. The opening of one book shows bearded Hera overseeing a battlefield wet with blood: "Achaean blood runs riot, the thick smell of wet coins, hot and heavy, hangs in the stifling air," Fraction writes; he draws not only from Homer but also from Aeschylus, the Thousand and One Nights, and various other myth traditions. In a tale inspired by Scheherazade, two brothers murder their cheating spouses. The massacre takes place in a hothouse full of flowers, and, in Ward's panels, butchered limbs are interspersed with orchids, brains with tulips. This meeting of beauty and butchery is typical of Homer, who compares deadly warriors to flowers or cranes in magnificent similes.

'ODY-C' is a beautifully colored space Odyssey, both graphic and novel, which makes Homer new.

Fraction often plays with an adapted version of Homer's own stately meter, dactylic hexameter. "He with the c--- that once launched, in its honor, some tenthousand swiftships," begins one sentence, an explicit turn on Doctor Faustus's "face that launched a thousand ships," with the final five syllables imitating the meter of a Homeric line ending.

The story of the house of Atreus is one of murder, cannibalism, incest, and the curses of the gods. In his version, Fraction is inspired by Aeschylus, but in place of the tragedian's dire, opaquely sinister tragic verse, the whole story is told in eerie limericks. Fraction picks up beautifully on threads in the original — Aeschylus' metaphorical "nets of fate" become literal nets cast over the last bath of Agamemnon (Gamem, in this telling). After Menstra (Clytemnestra) kills Gamem, Fraction writes:

The crown of Atreus, its proud golden sheen

Its bloody past known, its future, unseen

The last line appears alone on a magnificent portrait of Clytemnestra, robes flying, eyes flashing, blood flowing around her as she places the gory crown on her own head. Each page of ODY-C could almost be framed, it is so electric and lush.

The collection finishes with a series of essays by the self-described "reformed classicist" Dani Colman. These are the only things in ODY-C that are not wonderful; her essays on classical themes are rife with basic factual errors and vague, unsupported assertions. We can't all be Anne Carson, but we can all for the most part do a Google search for "Homer" and discover that no one really thinks he was a blind bard anymore.

ODY-C isn't gender flipped in the usual gimmicky sense — that is, a female world built in direct opposition to a male model. Instead, these fearsome women feel entirely whole and natural, not inverted images of men created to make a point. Reading ancient literature can occasionally feel like a lesson in the disposability of women. But change is the essence of Homeric poetry, and with ODY-C, two male comic book creators have made a Greek hero worthy of women.