Accessibility links
Supreme Court To Consider How Long Immigrants May Be Detained Without Bond Hearing The legal issue before the court tests whether people who are detained for more than six months have a right to a bond hearing. This involves permanent U.S. residents or people seeking asylum.

Listen · 3:54 3:54
Supreme Court To Consider How Long Immigrants May Be Detained Without Bond Hearing 3:54 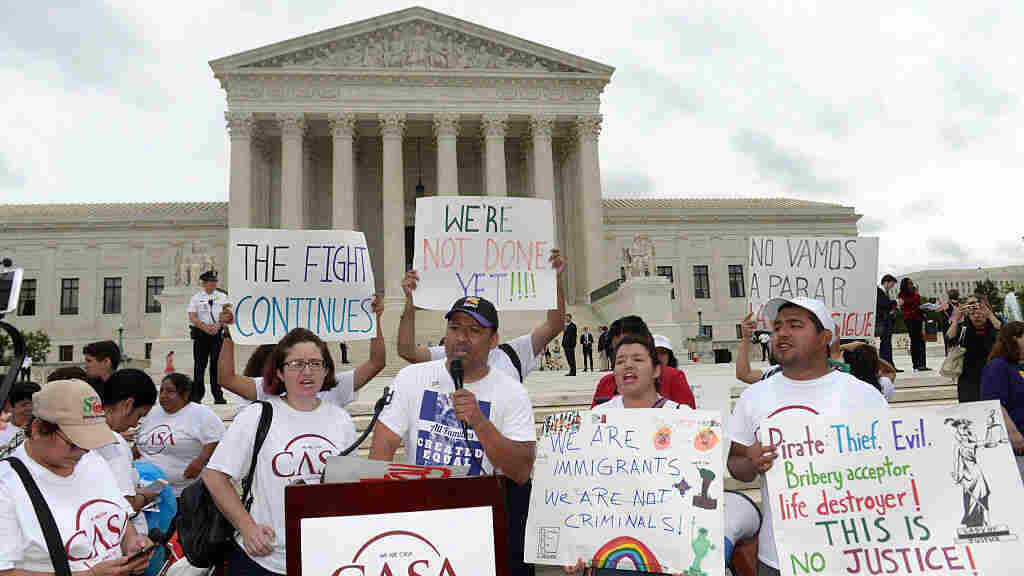 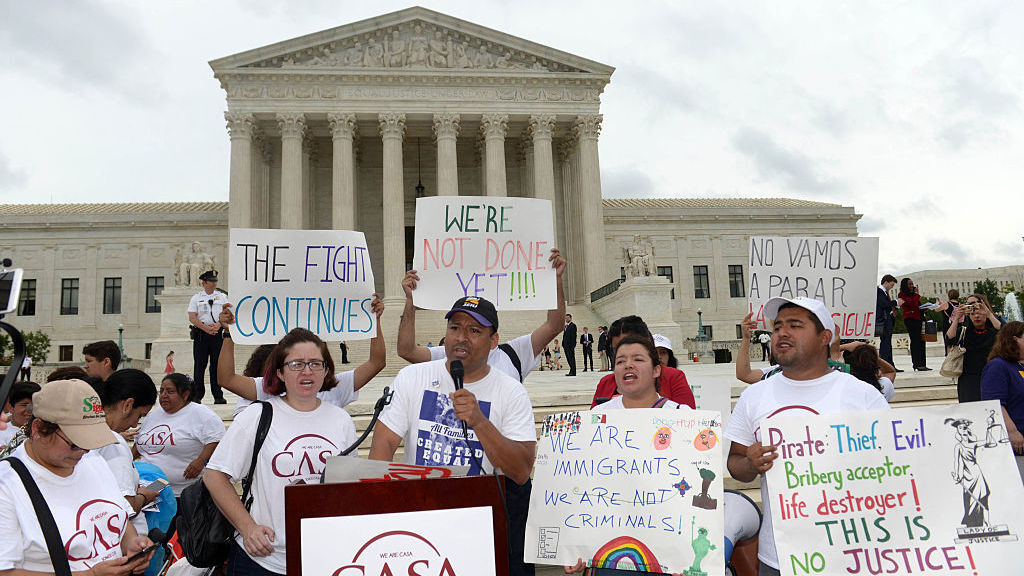 People attend an immigration rally outside the Supreme Court in June.

The U.S. Supreme Court takes up important immigration questions Wednesday, even as President-elect Donald Trump talks of pushing for more deportations. The legal issue before the court tests whether people who are detained for more than six months have a right to a bond hearing.

These are not the usual deportation cases, where facts are cut and dried and people are deported within a month or two of their detention. Rather, these are people legally in the U.S., lawful permanent residents who the government is trying to deport because they committed a crime, or some cases, people who turn themselves in at the border seeking asylum because they claim a reasonable fear of persecution.

When their cases are ultimately decided, these individuals have a good chance of prevailing. Forty percent of the lawful permanent residents and 70 percent of the asylum seekers eventually win and remain here legally.

The problem is that their cases take a long time, on average 13 months. And while detention may sound benign, it is not, said Ahilan Arulanantham, the ACLU lawyer who will argue the immigrants' case Wednesday.

"If you walk into a detention center, you would think you were in a prison," Arulanantham said.

He notes that detainees wear colored jumpsuits and live in cells or dorm-style barracks. Their movement is strictly controlled by guards.

"If you want to go visit your family member," Arulanantham added, "you can't touch them. You have to talk to them, usually, through a phone with a glass pane separating you."

Two federal appeals courts have ruled that after six months detention, these detainees are entitled to a hearing to determine if they are a safety or flight risk. If they are not, the lower courts said, they should be allowed temporary release after posting a money bond, or agreeing to electronic monitoring, or both.

The Obama administration is challenging those decisions, arguing that the lower courts exceeded their authority.

Lawyers for the immigrants make their argument through examples. The lead plaintiff in the case, for instance, is Alejandro Rodriguez, a 39-year-old lawful permanent resident of the U.S. who was brought to the country when he was an infant. He was working as a dental assistant when he was picked up and detained for deportation based on a 1998 conviction for joyriding — not a deportable offense — and a later conviction for drug possession, which is a deportable offense, at the discretion of the immigration court.

Rodriguez was detained for three years and ultimately prevailed in keeping his status as a lawful permanent resident.

The ACLU says Rodriguez's case is hardly unique. It points to hundreds of other lawful permanent residents convicted of relatively minor offenses, often committed when they were teenagers, who now face detention, potentially for years, while they fight deportation.

The other category of people before the court on Wednesday are asylum seekers. These are people who have been judged to have a credible case of fear of persecution back home. The ACLU points, for example, to the case of an Ethiopian asylum seeker who fled his homeland after he was abducted and then held in captivity and subjected to "horrific acts of torture" for over a year. When he fled to the U.S. seeking asylum, he was detained without any chance for release after a Department of Homeland Security officer concluded that he was not dangerous but mistakenly thought he was from Somalia and, therefore, had insufficient proof of identity.

ACLU lawyers argue that if this individual had been afforded a hearing, he could have pointed out the error and provided his Ethiopian government ID. Instead, in the end, he remained in detention for nine months, and was finally granted asylum.

The Supreme Court ruled in 2001 that detention, imprisonment, and other forms of physical restraint lie "at the heart of liberty" protected by the Constitution, but two years later, it upheld detention for brief periods without requiring individualized custody hearings. In Wednesday's case, immigration lawyers, who are representing between 6,000 to 8,000 people, contend that detentions that average 13 months are not brief, and that detainees are entitled to a bond hearing after six months.

The Obama administration countered that these arguments are all beside the point, because, in the government's view, the executive and legislative branches traditionally have the power to control immigration matters free from any judicial oversight. In short, the government argues that if Congress or the president wants to change the law or immigration regulations, either can do so. But the courts have no business meddling in such matters.